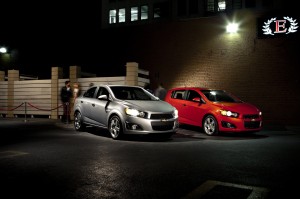 We?ve seen many small Chevys over the years with names like Vega, Geo, Cavalier and Aveo come and go but like a diet meal, they just didn?t satisfy.

Now Chevrolet has a new car that?s more like it ? think cheeseburger and fries.? Totally satisfying and downright fun, the new Chevrolet Sonic is a tasty treat on GM?s menu.

Developed from GM?s new Global Small Vehicle platform (called Gamma) the underpinning will be under cars all over the world before long.?

Sonic comes in a pair of body styles, a four-door sedan and five-door hatchback.? The? ?stylish sedan goes far beyond the bland styling that often plagues entry-level models with a flowing roofline, attractive Chevrolet family front end, sculptured hood and sides with flared fenders.? Then both ends are illuminated with large lights to better see and be seen. 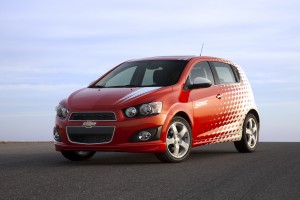 The five-door hatchback is our favorite.? At first glance it looks like a two-door, because the rear door handles are hidden in the rear C pillar.? ?The hatchback front end is about the same as the sedan, but the rear treatment has a unique rounded hatch, covered by a ?wrap-down? spoiler and a C-pillar treatment that sweeps down from the roof to the large rear bumper.?? The styling will undoubtedly lend itself to some very creative paint schemes. ?Chevy has anticipated customizing desires by offering available body colored wheels, aero kits and graphic wraps to give the Sonic an exciting custom look.? Sonic looks good in photos, but it looked even better in our garage.

Speaking of the garage ? the Sonic makes our large garage look massive.? At 159-inches long and 68-inches wide, the Sonic is about a foot longer and a couple inches wider than a Mini Cooper and it looked almost dinky in the garage stall.? Imagine how easy it is to park. 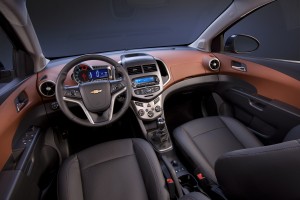 Sonic?s motorcycle inspired interior treatment is unique.? We disagreed over the instrument panel, though.? Barbara thought it was too extreme looking and out of place on the attractive dash.? Bill liked the novelty and ease of use with the large analog tachometer flanked by a large digital speedometer and indicators. ?The center stack is bold, too, with large buttons and dials in an easy-to-use formation.

On the passenger side of the two-tone dash with silver metallic accents, the Sonic has a double glove box system.? The top box is perfect to store phones and music devices, and it just happens to have USB and auxiliary device outlets.? Why hasn?t someone done that before, it?s great place to stash those electronic gadgets and hide the wires.? The large glove box below has room for tons of other stuff.? There are also large open compartments on either side of the center stack, space in the doors, the console and in various other locations. ??Cargo space is very good for a small car swallowing up to 19 cubic feet behind the rear seat, or up to 30.7 cubic feet when the rear seat backs are folded.? The sedan holds a respectable 14 cubic feet, too.

The front-wheel drive Sonic is available with a choice of two 138-hp four-cylinder engines.? That?s correct; two engine options with the same horsepower.? The base engine is a 1.8-liter naturally aspired DOHC four-cylinder.? The optional engine, which is available on the LT and LTZ models, is a 1.4-liter turbocharged DOHC four-cylinder.? The turbo engine has a couple of advantages including 13 more foot pounds of torque and a five mpg better EPA highway fuel economy rating.

The turbocharged Sonic registers an 8.1 second 0 to 60 mph time.? EPA fuel economy is listed at 29 mpg city and 40 mpg highway for the 1.4-liter turbo.? We actually averaged 35.1 mpg during our week of mixed driving conditions.? The 1.8-liter engine is rated at 25/35 with the automatic transmission.

The Sonic transmission options include a standard five-speed manual for the 1.8-liter engine and an optional six-speed Hydra-Matic option.? ?The turbo engine is only available with a six-speed manual transmission, which helps give it an even sportier demeanor.

The small size doesn?t equate to less safety.? Rather than seeing how many people they could cram in the Sonic, safety engineers wanted to see how many airbags would fit, and the final count is ten — that must set some sort of record.? Sonic also has a long list of safety features like stability control, rollover sensing, antilock brakes, brake panic assist and even OnStar communications with Turn-by-Turn navigation. 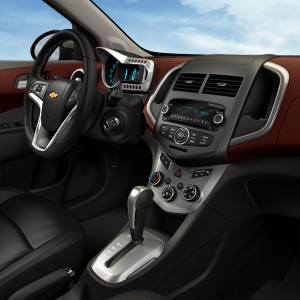 Both the Sonic sedan and hatchback come in three trim levels LS, LT and LTZ. ?The LS sedan starts at $14,495, including destination, and the hatchback is $900 more.? The top of the line LTZ sedan is $17, 295 and the hatch back is $17,995.? The LTZ is very well equipped with features like wheel-mounted controls, heated leatherette front seats, cruise control and 17-inch alloy wheels in addition to all the features standard on the other models like air conditioning, keyless entry, power windows, heated mirrors, etc.? Major options include the six-speed automatic for $1,070 or the 1.4-liter turbo engine and six-speed manual transmission for $700.

Sonic looks small, but is amazingly roomy inside.? We were impressed by how quiet and comfortable this car was plus the small size translates into agile handling and driving fun.? It?s not quite at the handling level as the Mini Cooper, but there is a strong resemblance.

Sonic is built at the General Motors plant in Lake Orion, Michigan. 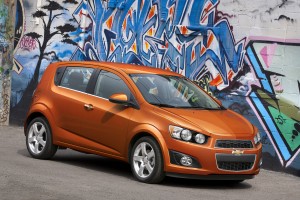 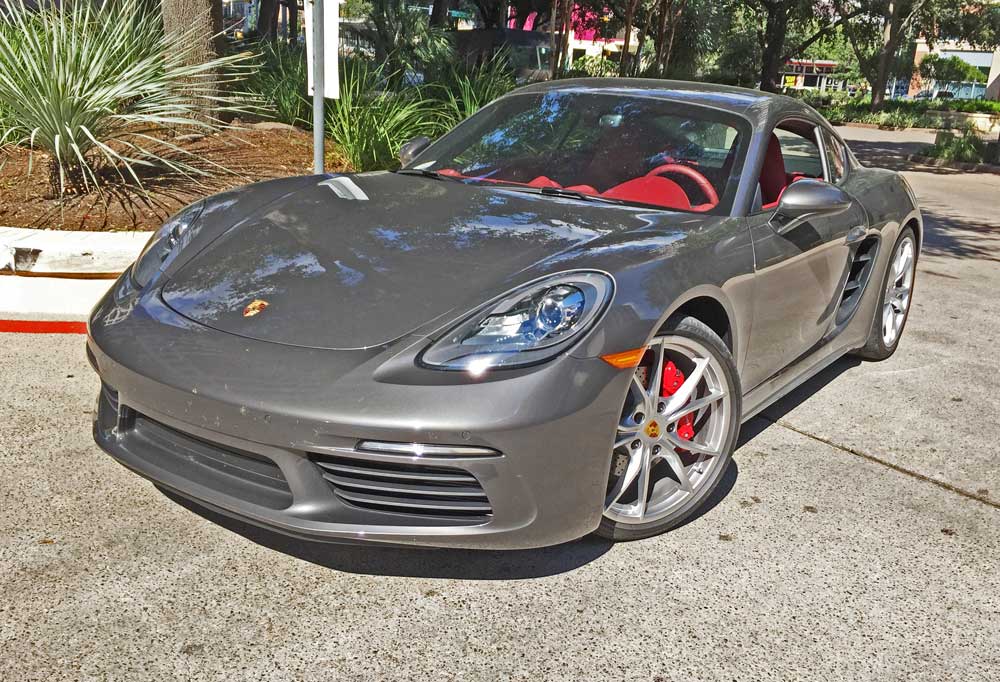