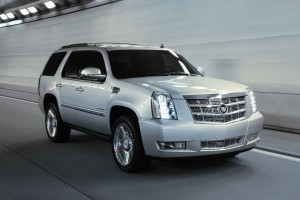 Los Angeles ?? There?s a good reason the black Chevy Tahoe, GMC Denali and Cadillac Escalade are the cars of choice of so many of the good guys and bad guys on television and we would presume in real life, or at least in Washington D.C. ?they are spacious comfortable and remarkably utilitarian.? Tint the windows dark, and these vehicles take on a look that ranges from prominence to sinister, stirring the imagination of anyone on the outside.

For a recent getaway on the Southern California coast, we borrowed a Cadillac Escalade ESV Platinum edition to see what it?s like to tool around in one of these colossal SUVs.? Ours was the new radiant silver metallic paint instead of the attention compelling black so we lacked the aura of being sinister or important, but we still experienced all the luxurious room and power.

Escalade comes in three configurations: regular size, the extended length ESV and the EXT, which has a truck bed and an industry-exclusive Midgate that allows owners to convert from a five-passenger SUV to two-passenger pickup with eight feet of protected and secured storage under the standard lockable tonneau cover. 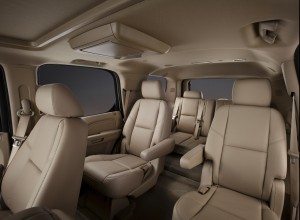 As you might imagine, the Platinum edition, adds significantly to the price (about $20,000), but other than choosing colors, the model has everything. ?Everything means navigation, Bose 5.1 surround sound, expanses of leather, heated and cooled seats, rear seat entertainment (including a third screen for the third row), 22-inch chrome wheels, HID headlights, ?and even a running board that disappears under the Escalade, when the doors are closed.? And that?s just a smattering of the standard equipment list.

The price of such luxury is steep?$86,090 including the destination charge, for the all-wheel drive version, but there?s a lot of real estate in the three-ton vehicle.? It?s 18.5 feet long, seats seven has a cargo volume of 137.4 cubic feet when the seat backs are lowered ? that?s enough space for about 33 roll-aboard suitcases.

All Escalade models, except for the hybrid, are powered by Cadillac?s 403-hp, 6.2-liter V-8 engine.? The big engine has variable valve timing, Active Fuel Management and is configured to run on gasoline or E85 ethanol.? The transmission is a fuel-saving six-speed Hydra-Matic driving either the rear wheels or the full-time all-wheel drive. ?It also tows up to 7,800 pounds. 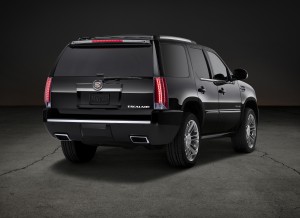 The Escalade is fast from a dead start making the 0 to 60 mph runs in a blink over seven seconds, and it has excellent passing power with the big V-8 roaring under the hood.? The V-8 gets an EPA rating of 13 mpg city and 18 mpg highway.? Running up and down the California freeways and negotiating through city traffic gave us an average of 16.1 mpg during the week we were in command.

To maximize ride and handling characteristics, the Escalade Platinum edition is equipped with GM?s innovative Magnetic Ride Control, which has real-time shock absorber damping.? The system continually ?reads? the road and can change the shock dampening in just five milliseconds by changing the electrical current to the special electronically controlled shocks filled with a magneto-rheological fluid containing minute iron particles.? The resulting ride is limousine like, while maintaining a controlled flat ride in corners.

For environmentalists, the Cadillac Escalade is probably something of a nightmare, but for someone that wants a large luxury people mover, it?s a dream.? You float down the road engulfed in opulence, sitting above the rest of the traffic.? It?s quiet, feels powerful and at the same time feels very stable for such a big rig.? When you need to transport people or cargo, it works, without sticking its nose in the air. 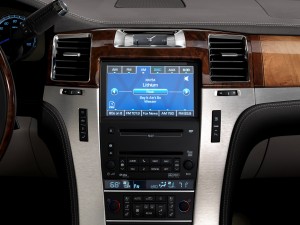 On the downside, its size takes the fun out of driving in a parking garage or on a crowded street.? Nevertheless, Cadillac engineers have included features like a backup camera, ultrasonic rear parking assist and reasonable rear visibility to make backing up not feel impossible.? On the freeway, the side blind zone alert warns the driver about other vehicles before he or she does something stupid.

Size alone certainly makes the Escalade feel safer, but features like StabiliTrak with rollover mitigation technology combined with all the airbags and other safety features help.

The hybrid Escalade offers an interesting option with significantly better fuel economy.? The hybrid uses a 332-hp 6.2-liter V-8 and a two-mode electric hybrid system.? The system generates electricity every time the brakes are applied, or the vehicle is coasting.? That power is then stored in a 300-volt battery pack under the second-row seat.? The stored power is then drawn from the battery to drive the two electric motors in the variable transmission.? The hybrid rates an EPA fuel economy of 20 mpg city and 23 mpg highway.? It is priced at $75,840 or $85,285 for the Platinum model. 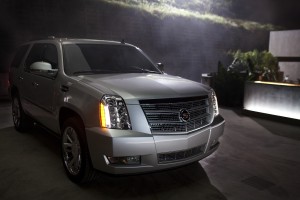 Small cars and hybrids may be the darlings of the current automotive market, but there?s a place and purpose for a Cadillac Escalade.