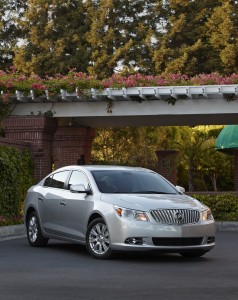 Palo Alto, Calif. ? Buick has gone through some fascinating changes through the years.? Remember when it was only old guys that drove Buicks?? That stigma made it difficult to sell to the younger and mid-age car buyers and probably still affects sales today.? Then in a strange twist Buick became the top selling brand in China ? having never been to China, I don?t understand that.

However, the most interesting thing the brand has done in the last few years has been build some good new vehicles like Enclave, LaCrosse and Regal. ?Now the market is starting to pay attention to the brand and the products seem to be getting even better.

Take for example the Buick LaCrosse, it?s a very impressive mid-level luxury model, and it has developed a solid reputation for styling and quality.? Most recently, the brand has ventured into more technological innovations with the release of the LaCrosse with eAssist.

The innovative eAssist will be standard equipment on the 2012 Buick LaCrosse equipped with a four-cylinder engine.? The system uses a 15kW motor-generator unit powered by a115-volt air-cooled lithium-ion battery and coupled with the 182-hp, 2.4-liter Ecotec direct-injection four-cylinder engine and next-generation six-speed automatic transmission. 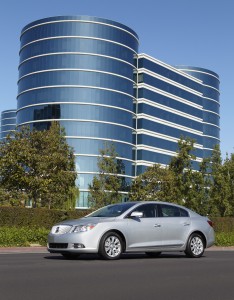 ??????????? The eAssist improves fuel economy and provide an electrical boost during certain driving situations like heavy acceleration or driving up hill.? The eAssist battery charges through regenerative braking and by the motor-generator unit.

To save fuel, the system enables the Ecotec engine to shut down fuel delivery during certain conditions such as deceleration, or when the vehicle is stopped.? During deceleration, the motor-generator continues to spin the engine bringing it to a smooth stop and positioned for a smooth restart. ?Unlike a hybrid that stores electricity for propulsion, the eAssist stores power to help the gasoline engine operate more efficiently.? It?s not really necessary to understand a lot about eAssist, just know that it works and well and improves the performance of the LaCrosse.

Working with the eAssist is a new generation Hydra-Matic transmission that reduces spin loses while improving shift response and time.? The system is capable of providing electric assistance at cruising speed to allow the driver to accelerate lightly or ascend mild grades without the transmission having to downshift. 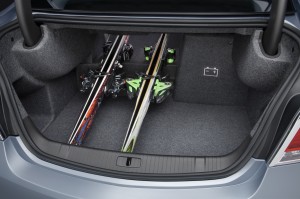 ??????????? The 65-pound eAssist lithium-ion power pack is located in the compartment between the rear seat and the trunk.? It is small enough that it still allows rear access to the trunk via the split-folding rear seat. The battery is cooled by an electric fan, which draws air from the vent located in the package tray behind the rear seat.

The LaCrosse is one of the first vehicles to use an active shutter system in the lower grille.? It automatically closes airflow through the lower intake inlet when the air intake is least needed thereby improving the aerodynamics.? Other aerodynamic enhancements include four underbody panels that smooth out the airflow under the vehicle and low-rolling resistance tires designed to improve fuel economy.

Working together, the eAssist components produce 25 mpg city and 36 mpg highway fuel economy, while providing a smooth and responsive power delivery for the driver.? These fuel economy numbers put the LaCrosse on the same fuel economy level of much smaller cars like the MINI Cooper and Toyota Corolla. ??The price for this stylish five-passenger luxury sedan is only $30,820, including the destination charge. 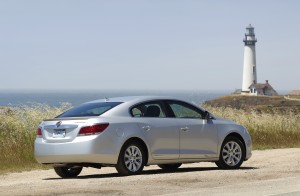 ? ? ? ? ? ?It should also be noted that this new LaCrosse is no longer like the Buicks the old guys used to drive.? There is floating along the roads and the unattached feeling after hitting a bump.? The modern LaCrosse has a four-wheel independent suspension system, including a four-link rear suspension that provides good feedback and driver control while maintaining a comfortable ride for passengers.

The LaCrosse has all the important safety features, too, including StabiliTrak electronic stability control, four-wheel disc brakes with four-channel ABS, electronic brake force distribution and brake assist system. ?The LaCrosse is also available with the three safety features I think are most important: the OnStar communications system, a backup camera and one of my favorite new systems, blind spot warning.

For drivers that are more interested in performance, the LaCrosse has a new more powerful and efficient version of the 3.6-liter direct injection V-6 engine.? For 2012, the V-6 has been redesigned and now delivers 303 horsepower.

Mechanics aside, the LaCrosse gets high marks for its elegant styling.? From the waterfall grille and hood-mounted portholes to the taunt carved lines, the LaCrosse is unique among midsize sedans. 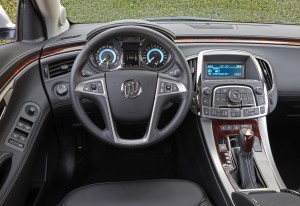 ? ? ? ?The interior is a fresh interpretation of the cockpit design with controls surrounding the driver?s space.? As the center console sweeps down the center stack, all important climate and audio controls are easily at hand.? At night, ice blue ambient lighting accents the interior adding elegance and better visibility.

Later in the year, LaCrosse with eAssist will come with standard Buick IntelliLink, which uses Bluetooth or USB to connect the driver?s smartphone to a new eight-inch, high-resolution, full-color touch screen display radio.? This expands on Buick?s current Bluetooth and USB capabilities allowing the smartphone to be controlled by voice commands or the steering wheel-mounted controls. ?It also enables streaming stereo audio from the phone through services like PANDORA? Internet radio and Stitcher SmartRadio?.

The new Buick LaCrosse with eAssist is a smart way to improve efficiency without having to go a full hybrid. 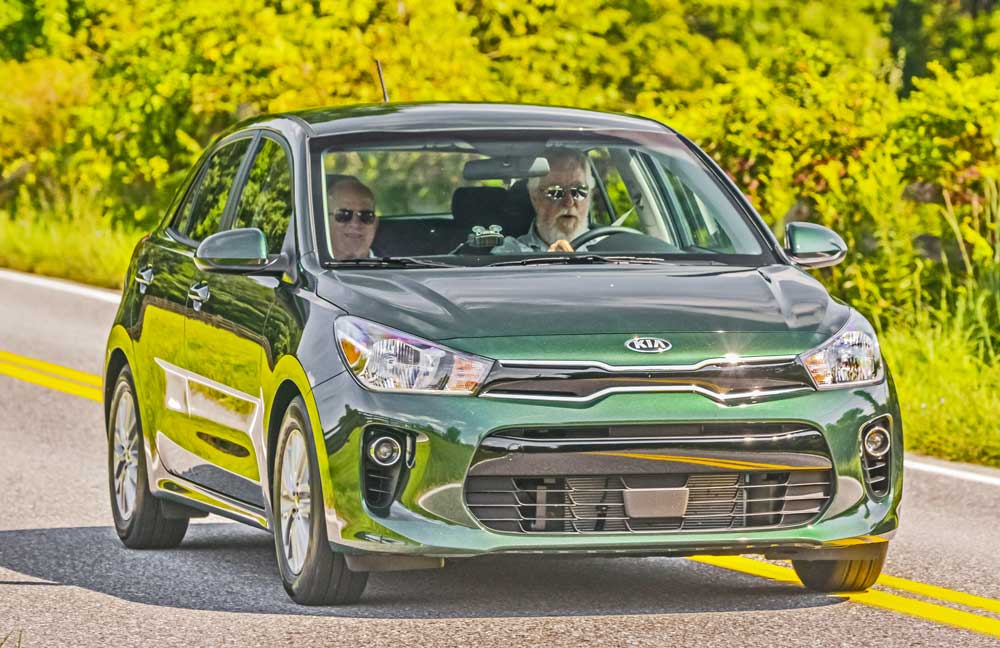