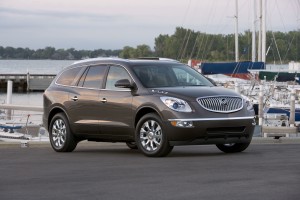 Not too many years ago, it was popular to brandish the famous advertising slogan, ?It?s not your father?s Oldsmobile?.? However, buyers must have liked their father?s Oldsmobile better, because they did not buy enough of the new ones and of course, a few years later the 107-year old brand was buried.

Buick was on similar shaky ground in the 1990?s and 2000?s ?but for some reason, the brand found a home in the Chinese market and the brand was revised, upgraded, polished, molded and remade into a remarkable brand with, a still limited, but very impressive offering ? Enclave, LaCrosse, Regal and Verano.? Now Buick is having a renaissance in the U.S. market.

As Buick?s full-size crossover representative, the Enclave combines fuel-efficiency, functionality, style and comfort in a premium crossover that fits up to eight people plus cargo. With EPA-estimated fuel economy of 24 mpg highway (FWD), the Enclave also provides better fuel economy than a typical eight-passenger SUV. 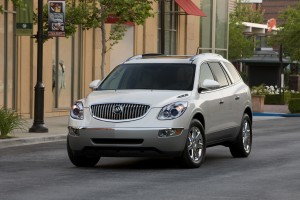 The Enclave led Buick?s product resurgence in the market and has succeeded in bringing new buyers to the brand. ??Despite being generously equipped, it is priced less than many other luxury competitors.

The Enclave was the first Buick with the new stylish family design language. ?It starts with the signature waterfall grille with the Buick emblem centered between headlights that resemble cat eyes set at an angle.? Then there are decorative classic Buick portholes gracing the sides of the hood in a tribute to the brand?s heritage.? Sculpted sides have the smooth muscular look of a well-tone swimmer, with some models displaying a contrasting lower trim color wrapping the bottom level to give the Enclave an even sleeker look.? The rear treatment is simple with wide taillights and a broad window for better rear visibility.

The two-tone interior is accented with broad swatches of good-looking faux wood on the center console, dash and door panels along with accents of a brushed metal treatment. ?The seats, door panels and dash are designed in a harmonious driver-friendly interior.

We especially like the organization of the audio, climate and other controls on the center stack.? They are grouped nicely, well marked and user friendly. The shifter has a manual shifting mechanism, but would prefer something like paddle shifters or a gated shifter pattern, rather than the toggle used for the Enclave ? it just doesn?t have the same sporty feel as moving a lever. 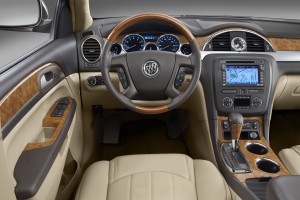 Enclave cargo space is monstrous, with 24.1-cubic feet behind the third row seating.? Lower the seat backs of the second and third rows and the space expands to 115.9-cubic feet.

Enclave is powered by Buick?s fuel-efficient 3.6-liter direct injection V-6 engine driving either the front wheels or all four wheels through a six-speed automatic transmission. The engine produces 288 horsepower and 270-lb.ft. of torque.

The Enclave is no lightweight weighing in at nearly 2.5 tons; as a result, the acceleration is only moderate taking 8.2 seconds to make a 0 to 60 mph run. ?Properly equipped, the Enclave will pull up to 4,500 pounds, making it perfect for pulling a couple of adult toys.? The weight combined with a good four-wheel independent suspension produces an excellent ride without wallowing or excessive body lean in the corners. 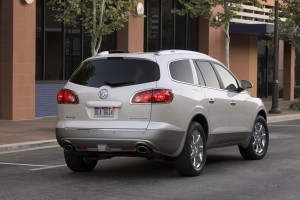 All models have an extensive list of safety, comfort and convenience features including all the features we expect to find in a luxury model.? Of course, the higher levels add many more premium features.

Buick?s Enclave certainly sets the stage for an impressive lineup of new Buick models that should be on anyone?s entry-luxury shopping list. 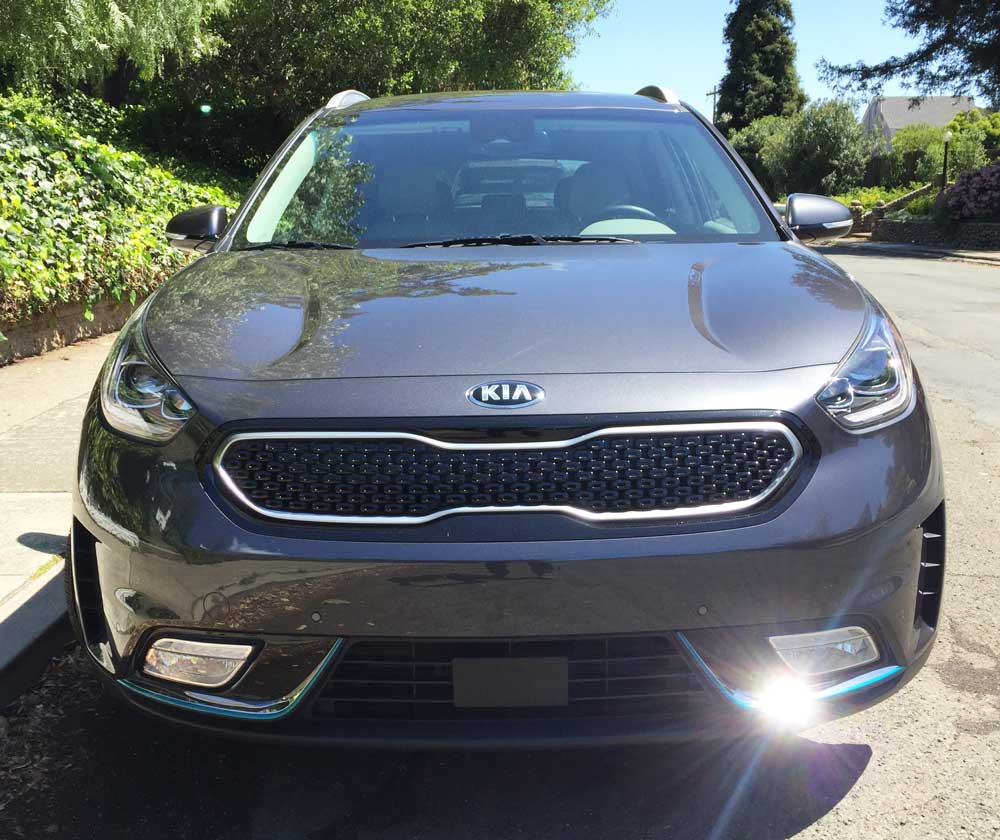