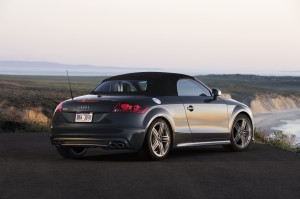 It had been three years since we last drove an Audi TT, so we were excited to finally have the new TTS version sitting in our garage.? The downside was that the ?S? performance version of the sports car was a convertible, and in southern Washington, we were experiencing more than twice the average spring rainfall.? That translated into rain every day, for the entire week of our test driving, so the top stayed in one position, UP!

The plus side was that this little Audi roadster is just as impressive with the top up as it is with the top down.

The turbocharged 2.0-liter four-cylinder engine that powers both the TT and TTS comes in two different strengths.? The base TT gets a 211 horsepower version which powers it from 0 to 60 mph in 5.3 seconds, and to a top track speed of 130 mph.? The TTS has 265 hp, which drops the 0 to 60 mph time to 4.9 seconds, and raises the top speed to 150 mph. ?Most interesting is that both engines get the same 22 mpg city and 31 mpg highway EPA fuel economy rating. 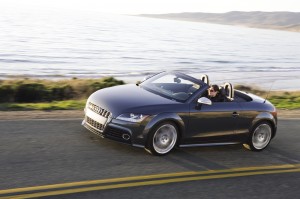 Standard with both engines is the quattro? all-wheel drive system and the fast shifting Audi S tronic? double clutch transmission.? This transmission changes gears as quickly as 0.2 seconds — that?s so fast you hardly see the tachometer dip when the shift is made.? The transmission predicts the driver?s next shift and using dual input shafts and dual clutch packs sets the transmission to make the next shift even before it happens. ?The shifting can be done automatically or it can be shifted manually using the paddle shifters or by pressing the console-mounted shifter. 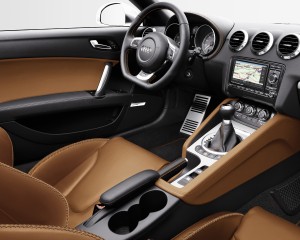 The TTS is pure sports car, with outstanding handling and acceleration.? Driving through the mountains near our home it displayed excellent balance and the famous quattro traction when pushed hard.? Audi?s Magnetic ride system is standard on the TTS (optional on the TT).? It continuously monitors driving conditions and driving style, adjusting the damping to for the optimum handling and ride.? The driver can also select either a ?Sport? or ?Normal? mode from a console-mounted switch to set the car for the type of driving you are planning.? For 2011, the system has been reengineered so when you select the ?Sport? mode, it also changes the steering ratio for better maneuverability based on the driving conditions and to open a baffle in the exhaust to produce a more aggressive engine note.

The TTS Roadster is built on Audi?s Space Frame, using a combination of aluminum and steel.? The frame is totally rigid with no discernable body twist or shake.

The Roadster?s top is an insulated fabric which makes it nearly as quiet inside as the Audi Coupe.? The durable three-layer top has a glass rear window and coupe-like headliner. The Roadster?s cargo area is larger than many other convertibles, measuring 8.83 cubic feet with the top up or down. That?s unusual, because normally the top can take up a big chunk of cargo space when the top is down.? It takes only 12 seconds to lower or raise the top, and the top can even be raised while the car is moving, at speeds up to 30 mph. 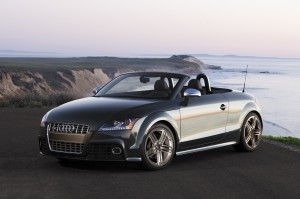 There are several exciting sports cars in the same league as the Audi TTS ? the Porsche Boxster, Mercedes-Benz SLK and BMW Z4?but the styling, all-wheel drive and luxury of the TTS makes it our favorite. 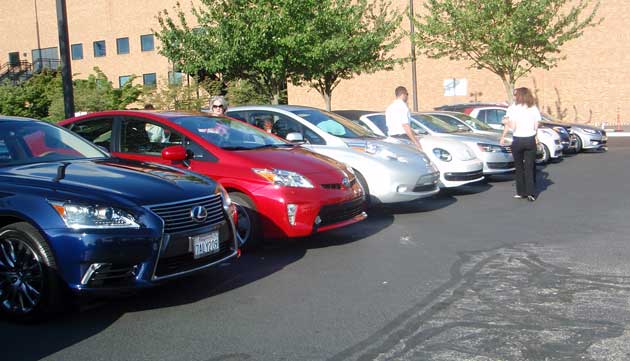