Antidote to the common hybrid 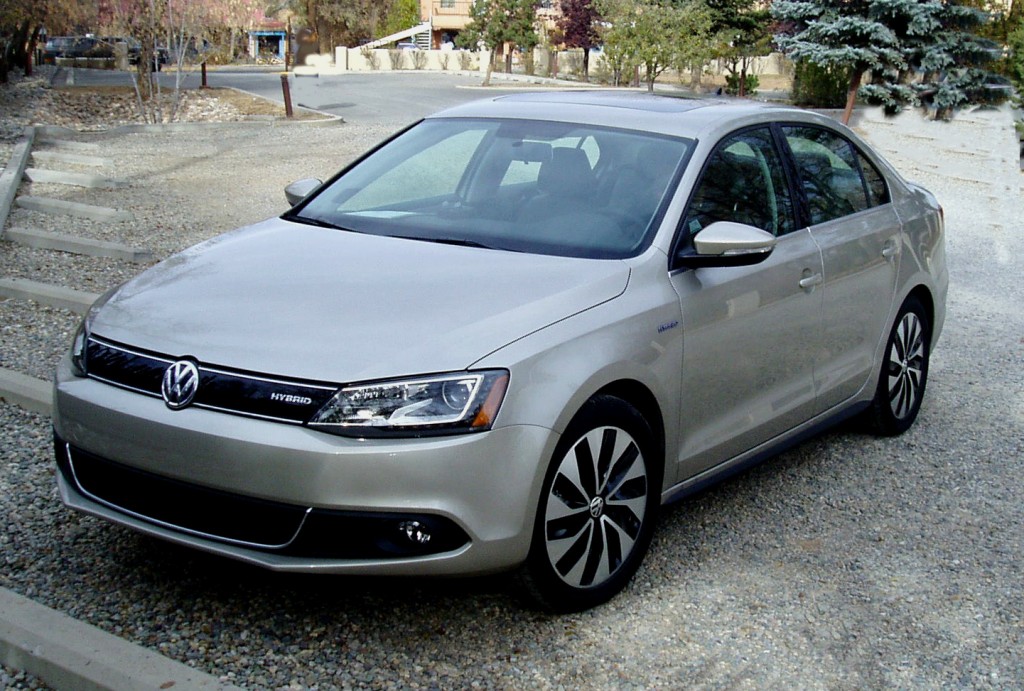 Santa Fe, NM – The latest vehicle to join Volkswagen?s Jetta stable promises to be an antidote to the common hybrid. It is an attractive, fun-to-drive four-door, five-passenger sedan that is easy on one?s pocketbook in two ways – it is economical to operate and it is reasonably and competitively priced.

The sixth generation Jetta, which was introduced as a 2011 model adds the 2013 Jetta Hybrid to its popular family. The 2013 Volkswagen Jetta Hybrid retains the same aerodynamic, ageless styling as the rest of the Jetta lineup, rather than trying to come up with a freakish interpretation to set it apart from its stalemates. There are obvious subtle differences however, such as the blue highlighted VW logo, hybrid badging, uniquely designed wheels, and front grille. Other distinguishing features that contribute to the Jetta Hybrid?s streamlined efficiency include: a hybrid-specific air intake that provides a flush seal, controlling the cooling air flow through the engine compartment; a custom trunklid spoiler, front air dam and extended rockers or side skirts. There are also additional trim panels and end plates for the underbody of the Jetta Hybrid, which aid in reducing turbulence and lowering the drag coefficient from 0.30 for regular Jettas to 0.28.

The new 2013 Volkswagen Jetta Hybrid is a parallel hybrid and will come in four levels of trim: the base model Hybrid which starts at $24,995; the Jetta Hybrid SE starting at $26,990 and distinguished from the entry-level Hybrid by LED taillamps; an SEL Hybrid starting at $29,325 which adds 16-inch aluminum alloy wheels; and finally the Jetta Hybrid SEL Premium with a starting price of $31,180 which adds 17-inch aluminum alloy wheels, Bi-Xenon headlamps with uniquely distinctive LED Daytime Running Lights, Active Front Lighting System, foglights with cornering lights, a rear-view camera and Fender?s Premium Audio System.

Motive force for all Jetta Hybrid trim levels is provided by a 1.4-liter, turbocharged and intercooled, Direct Injection inline, 150 horsepower four-cylinder gas engine that also delivers 184 pound feet of torque. The gas engine is coupled with an electric motor powered by Lithium-Ion battery that supplies 27 horsepower (20Kw) and 114 pound feet of torque (155 Nm). The two combined deliver a total of 170 horsepower (125 kW @ 5,000 and 184 pound feet of torque (250Nm @ 1,000). Metering power to the front wheels from the transversely?mounted front engine is a seven-speed DSG dual-clutch automatic transmission. It may be operated in a purely automatic mode or shifted manually. A Sport setting is also provided. 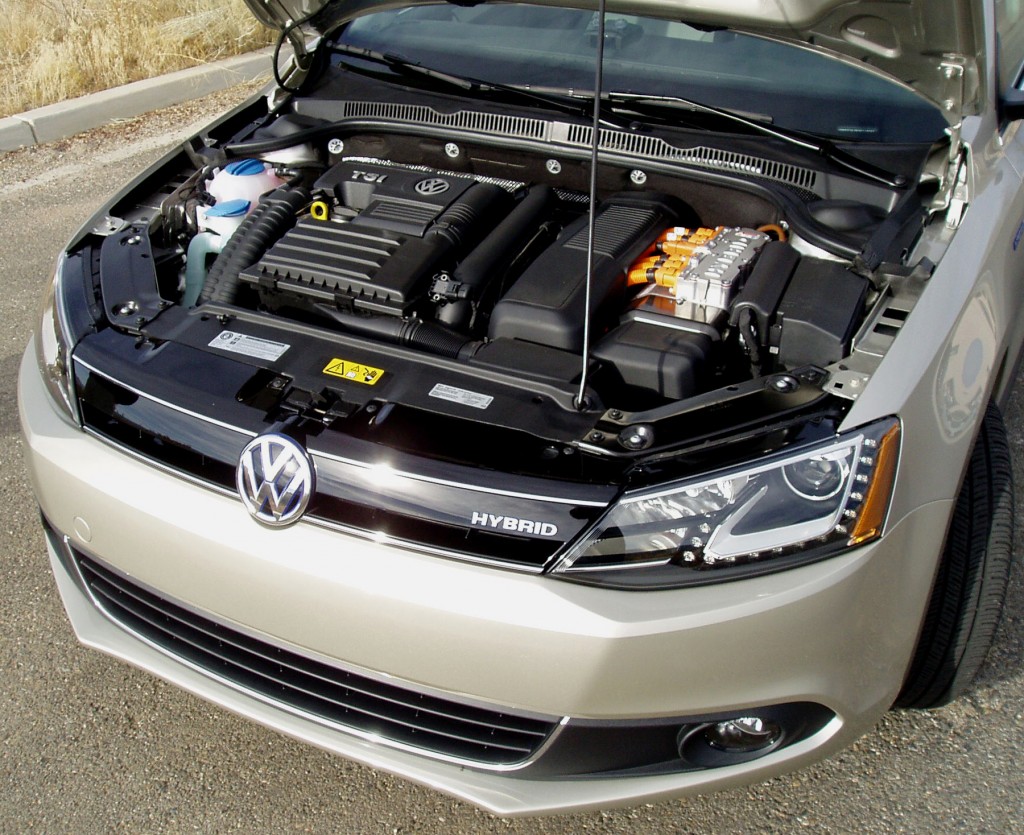 The 2013 Volkswagen Jetta Hybrid?s interior features a unique set of displays that highlight the advanced powertrain?s operation. A ?Power Meter? replaces the traditional?tachometer. The Power Meter reflects levels of charge and operational efficiency. In addition, there?s the standard Multi-function instrument that displays ambient temperature, gear selection, trip computer, a second audio display and driver settings. In the Hybrid, this screen also displays the car?s drive state and the ?ePower meter? which indicates the battery?s charge level and the available amount of electric driving (?E-Max?). On SE and higher trim levels, the radio and navigation system?s touchscreen in the center console doubles as a detailed graphic visualization of the powertrain?s operation. The car starts in electric mode operating in EV mode for up to 37 mph. Selecting the ?E-Mode? button to the right of the gearshift lever activates the zero-emissions, electric mode, maintaining a speed of up to 44 mph, while allowing for more aggressive throttle input. This mode requires sufficient battery charge and temperature range. If the battery is depleted, the gas engine kicks in and the system will reactivate once enough power has been regenerated.

In terms of safety features, the 2013 Volkswagen Jetta Hybrid comes standard with front and side airbags for front-seat occupants as well as Side Curtain Protection airbags for both front and rear seats. Included in driving aids and safety systems are: ABS, EBD, HBA and ESC. Jetta also employs VW?s Intelligent Crash Response System, which unlocks doors, turns on hazard lights and shuts down the fuel system in certain types of collisions where the airbags deploy or safety belt pretensioners activate. 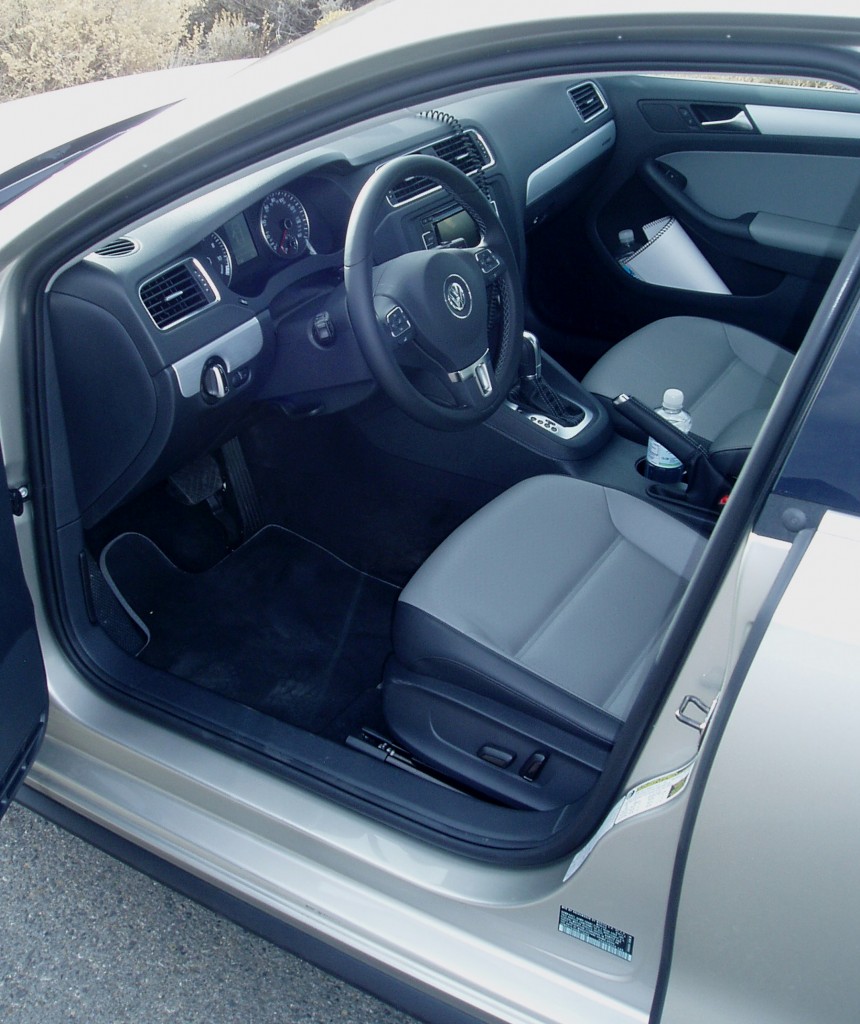 My pre-production test 2013 Volkswagen Jetta Hybrid was in SEL Premium trim. It sported a Moonrock metallic exterior finish (Gold) with a two-tone Black and Ivory interior. The base sticker read $31,180 while the final total came to $31,975.

SUMMARY: The 2013 VW Jetta Hybrid is truly a no-compromise hybrid that features the only turbocharged engine and dual-clutch transmission in its class, while also claiming the best acceleration and sportiest handling in its class. It also provides the most rear-seat legroom and largest trunk (11.3 cubic feet) in the compact hybrid sedan class, along with the best fuel economy in the Jetta lineup. 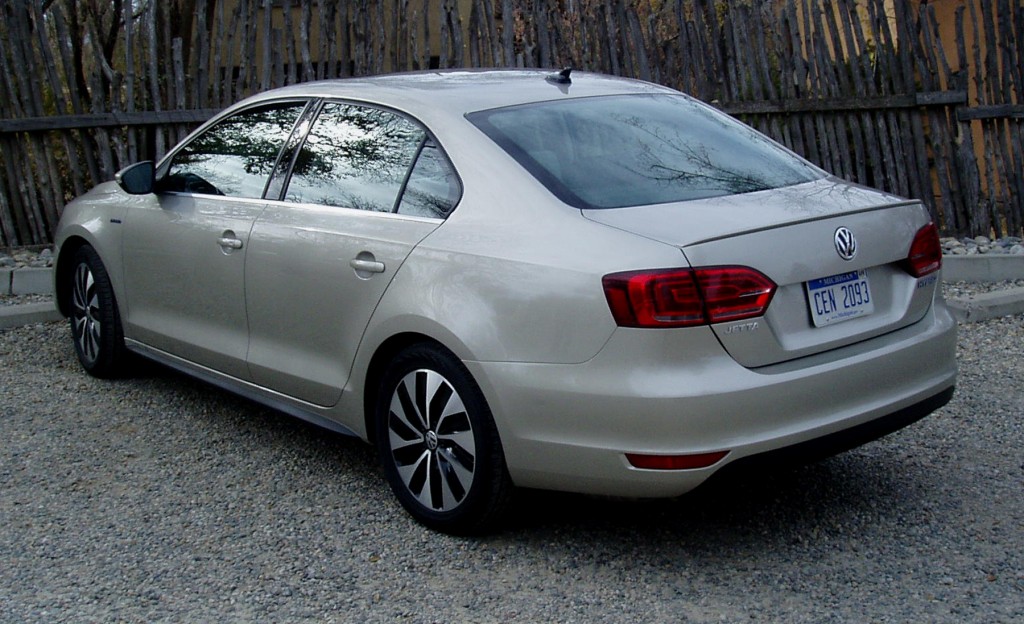 The seven-speed DSG dual-clutch automatic operates superbly in either the automatic mode or when shifting manually. Passing on an uphill grade in high altitude posed absolutely no problem at all.

The ride quality provided by the Jetta Hybrid is comfortable and compliant, while delivering a firm and stable handling response thanks to the same suspension componentry as the Jetta GDI. Actual handling characteristics are both nimble and sporty, with good on-center steering feel through its electric power steering. 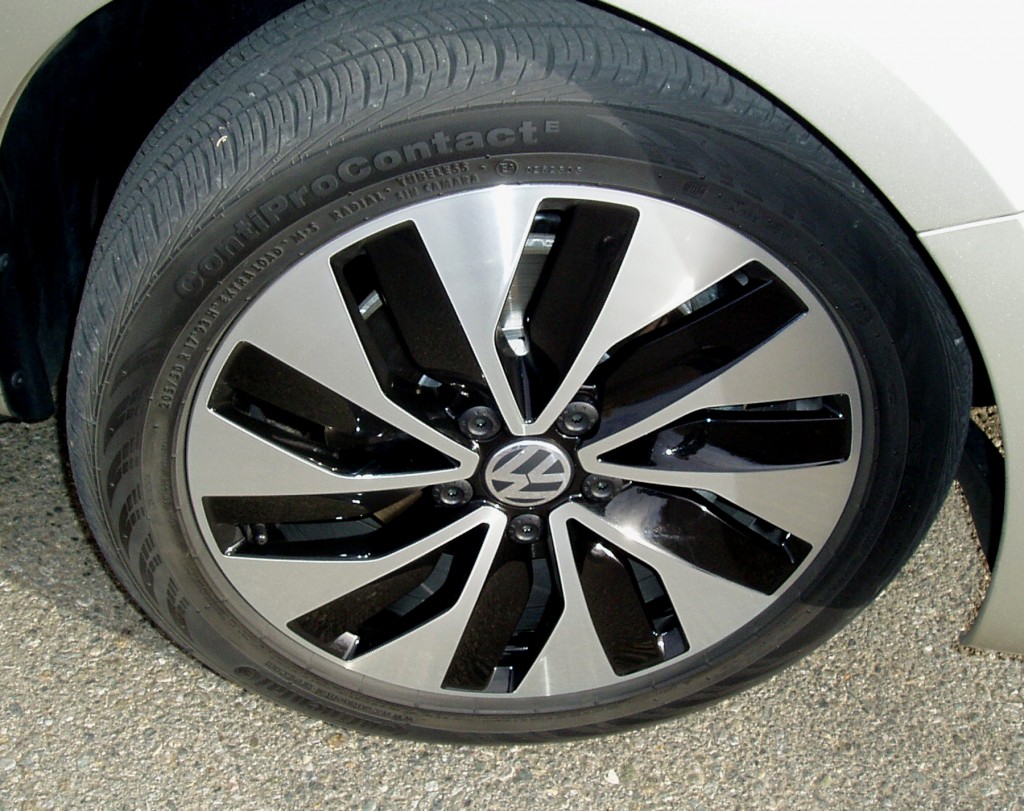 The addition of the Jetta Hybrid family now gives consumers a choice of five different powertains. There is currently no diesel scheduled for the Hybrid, possibly the only thing that might offer any improvement. For now, the Hybrid is an ideal choice for fuel economy conscious drivers who also seek fun driving enjoyment. The same warranty is offered for the Hybrid as for all other Jettas – 3 years/36,000 miles with a 3-year battery pack warranty. 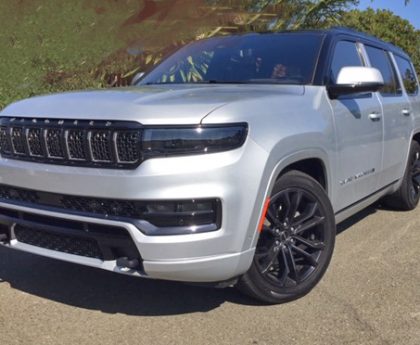 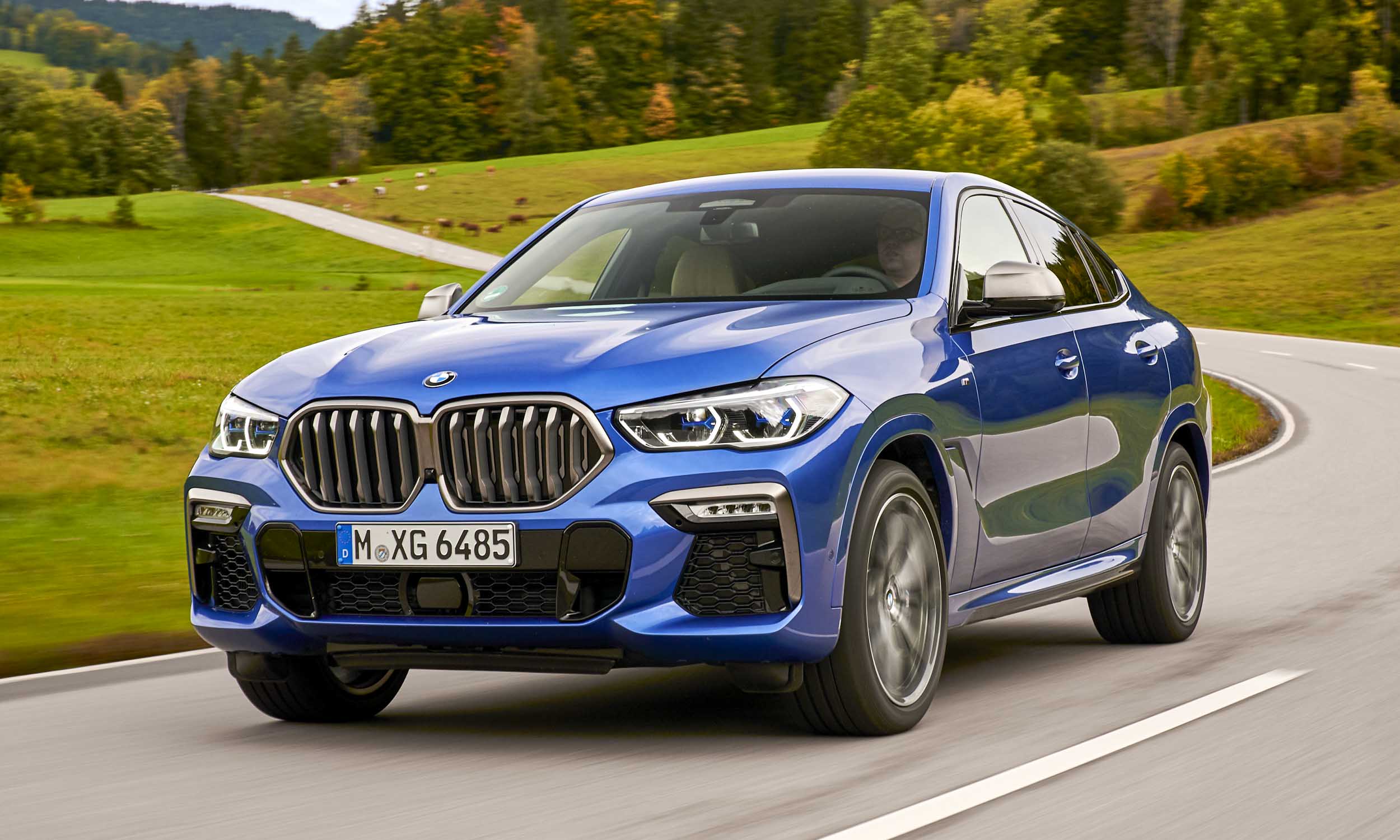