To many automotive journalists, it seemed to be a major error for Ford to drop the highly successful Taurus nameplate from the Blue oval lineup, only to replace it with the somewhat obscure 500 Series. In retrospect, it seems that many of us were right on the money in our assumption, that renaming what had been a longtime, top-selling model (more than 4 million were sold), with an unfamiliar moniker was not such a good idea, because, the Taurus lineup returned in 2010 along with its performance model, the SHO.

Not only did the Taurus return, it returned as a much-improved model that now represents itself as a considerably more sophisticated and luxurious four-door sedan. It is artistically sculpted with complex lines and an overall athletic form, including a beltine that definitively surrounds the entire vehicle. In addition, a strong character line runs from the new grille, (which is akin to the balance of Ford?s new look) just below the headlamps, engaging the substantially pronounced wheel well openings, and ending just ahead of the taillamps. The cabin glass features a chrome surround with blacked out ?B? pillars that serves up a coupe-like effect. The grille actually possesses an Aston Martin or Jaguar flavor, positioning the familiar Ford oval logo in the center of the blacked out mesh grille, surrounded by chrome trim. A honeycomb insert fills the lower air intake, which also features an encircling chrome trim. SHO badging appears in a fender-mounted scallop just behind the front wheel openings

The 2013 Ford Taurus comes in four available trim levels: the base SE; a more upscale; the Limited; and heading the lineup, the performance oriented Taurus SHO which returned in 2010 as the first SHO model in 10 years. The 2013 Taurus SHO begins pricing at $39,200. 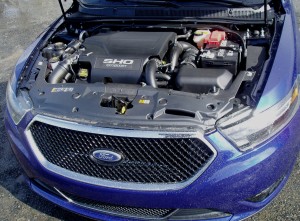 Engine variants for the 2013 Taurus lineup include a 3.5-liter, DOHC Ti-VVCT V6 that delivers 288 horsepower along with 254 pound feet of torque. There?s also a 2.0-liter EcoBoost inline four-cylinder that makes 240 horses while generating 270 pound feet of torque. The Taurus SHO also draws its motive force from a 3.5-liter V6, but in EcoBoost? form, which incorporates twin-turbocharging and gasoline Direct Injection, cranking out 365 horsepower and 350 pound feet of torque for an impressive 100 horsepower per liter. The Duratec V6 models mate to a 6-speed automatic transmission, and may be ordered as Front-wheel drive or in an All-Wheel drive configuration, while the SHO EcoBoost motor is connected to a 6-speed SelectShift? automatic transmission with?Paddle Activation and comes as All-Wheel Drive only. The SHO EcoBoost model?s exhaust exits via true split dual pipes ? one per side.

As one would expect, the Taurus SHO presents several subtle, yet still noticeable features that allude to its increased performance potential. Among them: 19-inch alloy wheels with a Lustre Nickel? finish (20-inch wheels are optionally available); a dicklid lip spoiler; aluminum pedals and trim; Nicco suede interior treatment; bigger stabilizer bars; stiffer springs; electric power assisted steering; and most notably, the equivalent of V8 power and thrust , with the more modest thirst of a V6. 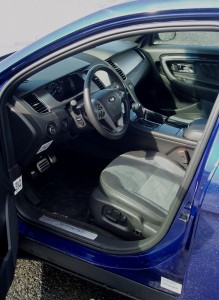 My latest test Taurus was a 2013 model SHO trim with a base sticker of $39,200. It was finished outside in Deep Impact Blue metallic with a two-tone Charcoal Black/Mayan leather interior. Options included the Rapid Spec 402A Package;? multi-contoured seats; Voice Activated Navigation System; Adaptive Cruise Control with Collision Warning; 20-inch Machined Premium Painted Aluminum Wheels; and Destination and Delivery; which elevated the final sticker price to $46,275.

SUMMARY:? I was afforded the opportunity to drive the EcoBoost V6 Taurus SHO in a variety of weather scenarios and on various road surfaces. Performance junkies will undoubtedly appreciate the new SHO, which displays a more alluring persona than the base Taurus. Obviously, the SHO?s EcoBoost V6 delivers a healthy dose of acceleration, and the handling characteristics are certainly conducive to spirited driving scenarios.

The level of technologies that are implemented in this latest iteration Taurus is beyond impressive ? to some, it might even prove to be mind boggling. Kudos are in order for the unique and innovative interior production processes that deliver more durable, yet attractive surfaces and textures at a reduced cost. 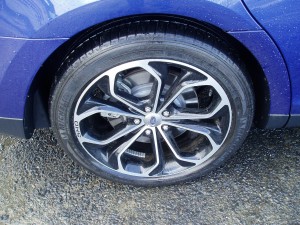 In the bottom line analysis, the 2013 Ford Taurus SHO delivers a most impressive ride. Admittedly, the price initially seems on the high side? — after all, spending more than $46,000 for a Ford Taurus is nothing to take lightly ? nor should you. This is however, not the Taurus of old ? it is an evolved vehicle from the all-new vehicle that appeared in 2010, with better looks, better performance, better fuel economy, fewer emissions and a wealth of technological features and equipment. Essentially, one would be hard pressed to find more content in another vehicle at the SHO?s price point. The time is definitely right to ?Let the SHO begin?, especially with the improved driving dynamics, larger brakes, torque vectoring control AWD system and specially calibrated electric power steering. Add the Taurus SHO Performance Package and things get even better with 20-inch wheels and summer compound performance tires and enhanced cooling system.

The new Taurus SHO will be produced at Ford?s Chicago Assembly Plant.