Vancouver, B.C., Canada ? Land Rover just launched its newest Range Rover model ? the 2012 Evoque. The Evoque is based on the futuristic and stylish LRX concept vehicle, which recently made the rounds of several International auto shows, drawing high praise and wide acclaim from both automotive journalists and the public. Unlike many concept-based production vehicles, the compact Evoque remains remarkably true to its original concept design.

The first compact Land Rover SUV was the Freelander, but the Evoque represents an entirely new ball game across the board. It is more car-like in both its appearance and drivability. But, it also possesses the characteristic off-road capabilities and prowess of its larger siblings. 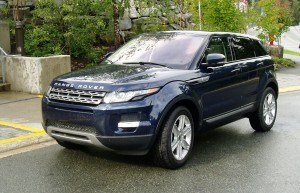 Evoque is available in two body configurations – that of a three-door coupe, which starts at $43,995. or a five-door version, that more closely resembles a sedan, with a beginning price of $44,995. The two body styles are available in three levels of trim: Pure ? the closest true expression off the LRX concept vehicle; Prestige ? the most luxurious execution of the Evoque; and Dynamic, the most overtly sporting Evoque example. The Evoque?s exterior styling features new interpretations of classic Range Rover design elements, including the signature clamshell bonnet (hood), the floating roof and solid, athletic ‘wheel-at-each-corner’ stance. Unlike any of its predecessors, the Range Rover Evoque displays a very dynamic profile with its rising beltline, muscular shoulder character line running the length of the car, and a unique and distinctive rearward taper to its floating roofline. The sculpted corners aid in reducing the car?s visual front and rear overhangs. Xenon headlamps with a signature design created by innovative LED light-blade technology are an available option. 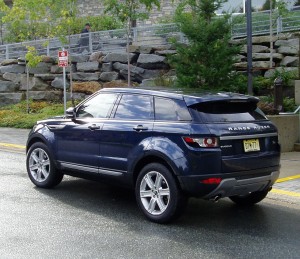 Moving to the inside, the Evoque?s interior takes the strong, clean architecture and quality materials of a traditional Range Rover and applies them in a sportier, more contemporary fashion.

Designers have also taken inspiration from the forms of the LRX concept?s interior, capturing the center console?s slope, and the simplistic, graceful lines of the instrument panel. The design retains the concept?s distinctive storage area beneath the sloping console – an open structure that echoes the new model?s themes of lightness and efficiency. 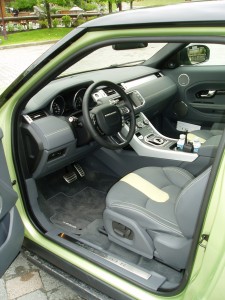 When the vehicle starts up, the interior displays and ambient lighting come to life in a precisely choreographed sequence. The solid aluminum rotary shifter completes the ?greeting? as it rises silently into the driver?s hand. A full glass fixed panoramic roof enhances the sense of room and freedom within the spacious cabin, filling the interior with natural light ? or not, as there is a full blackout screen as well. LED ambient lighting provides illumination within the cabin at night, with a range of colors that may be chosen by the driver. When Dynamic Mode is selected, a sporting red color floods the interior.

There are two Meridian audio systems available ? a standard 380W with 11 speakers, or an optional 825W with 17 speakers for the true audiophile. The hard drive features USB/ USB video and iPod, as well as Bluetooth link to phone and media player. The touchscreen voice control is a ?Say What You See? approach to telematics. A surround camera System is available with 5 cameras ? two in the front, two sides and one rear ? for both on and off-road scenarios.

All Evoques ride on an all-new, fully independent suspension, and all are based off of Land Rover?s mid-sized platform (LR-MS), which is a heavily modified EuCD platform. Evoque is 17-inches shorter, 18-inches lower and 1-inch narrower than the Range Rover Sport. All are equipped with a four mode Terrain Response System except the Dynamic models, which employ a 5th sensing mode. The electronic steering system (EPAS) is new, and there are other endearing features for those with off-roading in their blood ? things such as: Dynamic Stability Control; Hill Descent Control; Electronic Traction Control; Hill Hold; Roll Stability Control; Trailer Stability Assist; Gradient Release Control; and Adaptive Dynamics with Magneride. 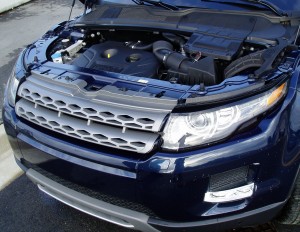 Every 2012 Range Rover Evoque depends upon a 2.0-liter, Direct Injected,

My driving partner and I drove both version Evoques: a five-door with a Baltic?Blue metallic exterior and Almond/Espresso two-tone interior in Pure trim, whose?price came to $47,745 after adding options; and a Coupe in Dynamic trim?finished outside in Colima Lime metallic, with a Lunar/Savannah interior priced?out at $59,020 after factoring in optional fare. 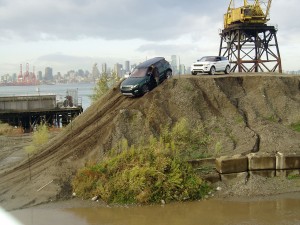 SUMMARY: The new 2012 Evoque is pleasing to pilot both on and off-road in either the Coupe or five-door configuration. The 2.0-liter, Direct Injected, turbocharged four-cylinder delivers all the power that?s needed for virtually any driving situation, and the ride quality is firm, yet compliant enough to deliver a comfortable ride. The handling characteristics provide a consistent, stable feel both low and higher speeds. Keep in mind however, that Evoques in Dynamic trim have less ground clearance and consequently, a reduced approach angle than their five-door counterparts.

Visually, both Evoque models are sporty and unique ? some might even say sexy in their appeal, but the Dynamic Coupe models are by far the most attractive, despite their lower stance and required extra diligence in off-road exercises. 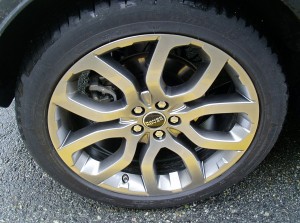 The new Range Rover Evoque is a stellar entry-level luxury compact SUV into the marketplace. Admittedly the price doesn?t initially seem compact, it is really a bargain given all of its technological attributes, and road-going (or off-road) capability features. It literally proved itself in the ?Sea to Sky? adventure, where all models to be driven were loaded on a barge that we were water-taxied out to for boarding. Once on board, we entered our assigned Evoques, and the barge was pushed toward shore by tug for disembarking by ramp into the water and immediately onto an off-road course before proceeding to Whistler and Blackcomb Mountain, where we were to drive through an early snow storm to the top of the mountain and back, where we were then flown by sea plane back to Vancouver to revel in the day?s action packed adventure, where the Evoque literally shined in both appearance and capability. The Evoque is a sure winner in its class ? in fact, it?s a winner period.