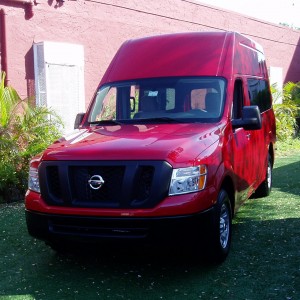 Miami, FL. Okay, you might not be interested initially in a commercial van, or at least you might not know it yet. Nissan?s latest entry into the global commercial vehicle marketplace, particularly here in the U.S. offers so much more in terms of usage applications for vans that include fulfilling such personal duties as securely hauling recreational vehicles, motorcycles, camping setups, dog fancier applications, race support and more ? the variations are seemingly endless.

Nissan is not new to the commercial vehicle industry ? 2011 marks the company?s 75th year of involvement, with more planned for the future, including a possible NV200 as well as a small dedicated electric van. 2010 sales exceeded 700,000 units in the world?s markets including Japan, China, Mexico, Russia, Europe and the Middle-East. Nissan CVs are currently cover sales in more than 75 percent of the global marketplace, with commercial vehicles representing 20 percent of Nissan?s global volume. The planned registration mix breaks down with 40 percent fleet sales and 60 percent small business and personal use sales. 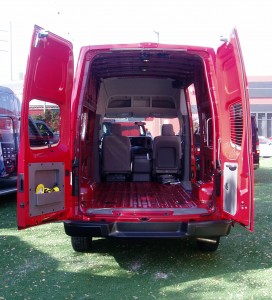 The Japanese company?s latest foray into the commercial vehicle market will offer a series of NV vans that feature a bold exterior design in what may be termed pick-up truck packaging, based on an all-new commercial-duty chassis with innovative interior space that provides user-friendly cargo areas with built in solutions for both personal and business applications.

Designed for the North American market, the NV vans present a strong masculine image offering positive advantages over pickup trucks, such as weather protection, theft prevention, overnight storage of tools and inventory, eliminating the necessity of unloading and reloading each day and advertising space on the nearly vertical side walls.

All models of the NV lineup are constructed on a body-on-frame format. Power sources include two engines choices, positioned forward as in a pickup truck with no invasion into the cab space. There is a 4.0-liter V6 that generates 261 horsepower and 281 pound feet of torque, as well as a 5.6-liter V8 that cranks out 317 horses and 385 pound feet of torque. Both mate to a five-speed automatic transmission that meters power to the rear wheels.

There are two basic body configurations: a standard height roof; or a high roof, in two trim levels ? S and SV. Model choices relate to weight class: the NV1500?is available only with the standard roof and with V6 power; the NV2500 may be powered by either the V6 or V8 engine, and is available in both roof styles; and the NV3500 comes only with the V8 engine, but in both roof configurations. Base pricing ranges from $24,950. For the NV 1500 to $30,590. For an NV 3500 HD High Roof. Add $980 Destination charge to each model. Final pricing will depend upon trim level and final equipment outfitting. Customers will be offered the choice of no-charge graphics ? an industry exclusive, with professional design and installation included; or of a no-charge upfit, installed utilizing dedicated mounting points that require no drilling, providing fully modular solutions with no rust threat. The high roof model provides cargo area stand-up room of 6?3?. There are multiple integrated reinforced mounting points for hardware installation and six floor-mounted D-rings for securing cargo, as well as a standard cargo area lighting system and standard upfitter pre-wiring. 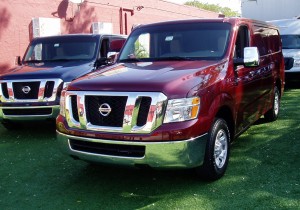 The vans will be built in Nissan?s Canton, Mississippi plant that just underwent a $118 million renovation to accommodate the NV manufacturing. The vans will all feature extra-wide opening rear doors (243 degrees) and a variety of available window packages. The front doors are also extra wide for easy ingress and egress. Seats are supportive, adjustable buckets with water repellent cloth seating surfaces and protective outer wear patches ? vinyl seating is optionally available. There are available pull-out storage trays under both seat on all but the NV1500 series, and the passenger seat folds down, providing an expanded desktop-like surface. Rear-door and sliding side door step-in height is low with grab handles.

The interior features a class-exclusive, available center console with lockable integrated storage and available 120V power outlets (2); one in the center console and one near the rear door on the D-pillar. High roof models come with overhead storage compartments. Other available options include: a Technology Package with Bluetooth? Hands-Free System; XM? satellite radio; iPod; connectivity; a Navigation System and RearView Monitor. 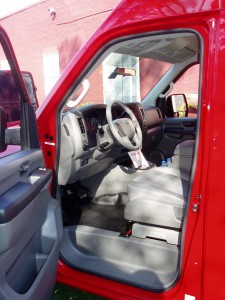 My driving partner and I began our charitable journey in an NV3500 HD high roof van in S trim and wrapped up in an NV2500 standard roof version with V6 power in SE trim, with drives in competitive vans. 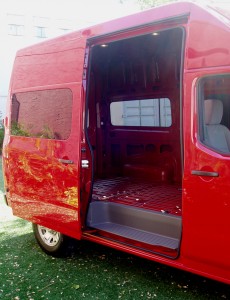 The NV3500S drove and handled more like a sedan, with plenty of power, excellent maneuverability and a surprisingly comfortable ride quality level. The NV2500SE with V6 power still managed to provide more than adequate power and an even greater handling feel. Both rode well with or without a load, but loaded, smoothed out the ride quality to an even higher degree.

Both vans proved superior to the competitive vans in terms of not only power and usable interior space, but comfort and versatility as well. Better yet, the NV series vans were less expensive, by a wide margin than Ford?s E-Series, Chevy?s Express and the Sprinter van. There is no high roof option in either the Chevy or Ford lineup. And?the NV3500 high roof van came in at $9,325 under the price of the similar Sprinter van.

Nissan promises to become a major player in the van marketplace with the NV Series. Their initial focus will be on commercial applications, but watch for specialized personal and recreational use examples to emerge shortly.