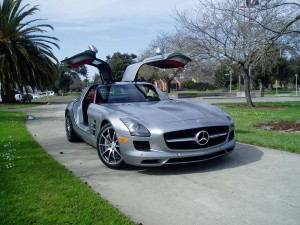 It has been said that ?Beauty is in the eye of the beholder?, and that?s indeed true up to a point. There?s no question that in the case of either the classic Mercedes-Benz 300SL gullwing of the mid-?50s, or the new Mercedes-Benz SLS AMG gullwing, that they are both elegant and beautiful, and highly desirable vehicles. Several colleagues have expressed however, that in their perception, the earlier version is by far the more beautiful and desirable of the two. Here we come to an impasse, as both cars have equal merit in their own right and are both lustworthy objects to any true auto aficionado. Those that claim the original, iconic gullwing ranks as superior in value and substance to the newer SLS AMG version, due so while stating that the latter is nothing more than a marketing exercise or ploy that possesses no real merit in terms of value or collectability, while also suggesting that the 2011 SLS AMG will soon be forgotten by those in the know ? I seriously doubt it.

Given a choice, which one is really best? Frankly, I wouldn?t turn down the opportunity to own either one, and given the ultimate choice, owning both would be a stellar scenario. The original is certainly at this point in time, the more popular of the two, and requires a heftier sum to acquire, but unfortunately is rarely available, thereby making the new one actually more attainable. As for the notion that the SLS AMG is only a marketing gimic to draw attention to the brand, that may be factual in a sense, but there?s absolutely nothing wrong with such a concept. After all, most vehicles are produced with that objective in mind ? probably even the original fell into that mind set when first produced. All that having been said, the 2011 Mercedes-Benz SLS AMG might well be considered a modern, spiritual reinterpretation and representation of the original 300SL gullwing. It is a particularly gorgeous car with phenomenal performance capabilities and technology going for it.

Power for this limited production, two-seat sport touring coupe comes from a 6.3-liter DOHC, 32-valve, naturally aspirated, hand-built AMG V8 engine with an 8-velocity stack intake and electronic fuel injection. It cranks out a whopping 563 horsepower at 6,800 rpm, along with 479 pound feet of torque at 4,750 rpm. The motor is placed up front in a North/South, mid-mount orientation, with power monitored to the rear wheels through a 7-speed AMG SPEEDSHIFT DCT rear mounted transaxle automatic sports transmission with AMG Drive unit and an E-Select lever. Travel from 0-60 mph may be accomplished in a mere 3.7 seconds, and the top track speed is rated at 197 mph. 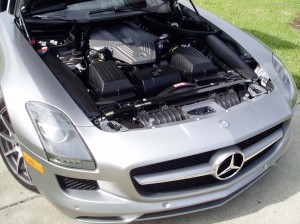 The 2011 SLS AMG supercar, now the flagship of the auto industry?s broadest product lineup, is the first-ever car designed and developed from the ground up by Mercedes-AMG, the company?s high performance division.? It features a lightweight aluminum space-frame body with gullwing doors, and boasts a weight distribution of 47/53 ? front /rear. In terms of styling, the new is patterned after the old, with its long front hood, short body overhangs, low cabin or greenhouse and abbreviated tail section. The styling highlight is, of course, the gullwing doors. Also reminiscent of the 1950s 300SL gullwing coupe is the wide front grille with its large Mercedes-Benz three-point star and wing-like lamella. The external door handles are flush mounted in the lower center of each door and pop out to open the door upward, retracting when the doors lock automatically, once moving forward.

Old world craftsmanship is in evidence throughout the 2011 SLS AMG, particularly in the engine assembly, where AMG?s ?one-man/one-engine? philosophy still applies, with a single, expert technician is responsible for the complete assembly of the engine, who then affixes a personally signed plate, proudly identifying the builder. 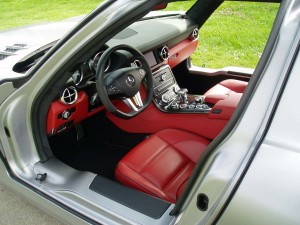 The interior is a highly refined personal space with a supportively comfortable layout that?s executed in both a sophisticated and intuitively functional format. A small T-handle mounted on the center console, serves as an electronic shift lever for the AMG E-DRIVE unit, which also includes a shift mode knob and buttons for selecting ESP and AMG driving modes, starting and stopping the engine and manually raising the rear wing.? One touch back on the T-handle engages drive, while a touch forward engages reverse. Pushing the ?P? button when the car is stopped, engages the park lock, which also automatically activates whenever the engine is shut off.

The rotary knob on the AMG E-DRIVE unit is for selecting the RACE START feature and four specific drive modes ? Comfort, Sport, Sport Plus and Manual.? AMG shift paddles on the back of the steering wheel control manual shifting. An automatic rev-matching feature makes for smooth downshifting, automatically metering engine speed for load-free downshifts, resulting in the elimination of lunging and jerking, even in power-on turns or during heavy braking. 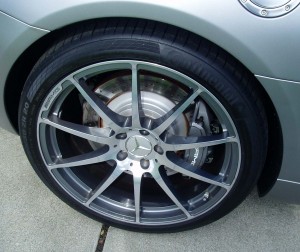 My test 2011 Mercedes-Benz SLS AMG came with a base price set at $183,000 but featured a designo treatment inside and out, that consisted of a special Mago Alanite Gray satin exterior finish and Classic Red single-tone,?hand double-stitched upholstery inside which cost an extra $3,950. Carbon Fiber trim accents added another $4,500, while the leather/Alcantara steering wheel tacked on $500 more. The AMG flow-formed (19×9.5-inch front / 2011-inch rear) 10-spoke alloy wheels amounted to $2,400 with the 1000 Watt Bang & Olufsen Premium Sound System with 11 loudspeakers, dual subwoofers, amplifiers with ICE power technology and illuminated tweeters bumped the tally another $6,400 and the Destination and Delivery charge of $2,750 elevated the price as tested to $203,500.

SUMMARY: I?ve not had the opportunity to experience seat time in one of the original gullwings, but I? m here to tell you that the 2011 SLS AMG version delivers miles of smiles. The real beauty of it, aside from its stunning appearance and visual appeal, is that it is content and docile when it needs to be, as when just tooling around town, while it is equally at home at triple digit speeds, and as already stated, it doesn?t take long to get there when prodded in a spirited manner, and I didn?t even take advantage of the AMG Race Start function. I didn?t have the opportunity to pilot this supercar over a closed course, and I wanted to keep my license intact, so high speed runs were confined to isolated areas with little or no traffic.

Complementing the prodigious power, the SLS AMG?s suspension consists of double wishbones and track rods at all four wheels ? an uncompromising proven racing technology. Go exceedingly fast, and you also need to be able to stop safely and quickly, and the SLS AMG comes with two-piece vented disc brakes that are grooved and perforated all around, reducing weight and transferring minimal heat. Fixed brake calipers (six-piston forward and four-piston aft) grab the discs at a force of 1,109 horsepower under full braking from 155 mph to zero. Ceramic brakes are available at optional cost for the race inspired.

Acceleration is blistering ? especially for a naturally aspirated engine, and the steering is spot on with instantaneous response. The ride quality is driver (or passenger) adjustable, and the Comfort selection seemed to be the right setting for normal conditions over varying pavement surfaces.

If there are shortcomings at all for the SLS AMG, they lie in the car?s most unique design feature ? the gullwing doors. Opening them is easy enough, but closing them requires a bit of a stretch, and one must exercise caution to avoid head bumps when exiting the vehicle. The ingress process proved to be less?than graceful for my ectomorphic structure. It was necessary to plant my posterior on the sill, slide into the seat, and then follow with my legs and feet. The other negative issue was the lofty price, which is out of reach for common folk like myself.

In the final analysis, the 2011 Mercedes-Benz SLS AMG is an incredible automobile that is a thing of beauty to behold, and equally beautiful to drive. The melodious and thunderous exhaust note is exhilarating at virtually any rpm level, which for me rendered the Bang & Olufsen Premium sound system virtually useless, incredible as it may be. All of the safety and technological features and equipment are covered by a new car 4-year/50,000 mile warranty, the Mercedes-Benz maintenance system and 24-hour roadside assistance. Yes, the original gullwing is gorgeous, and was a stellar performer in its day, but it lacks the finesse of the new SLS AMG. 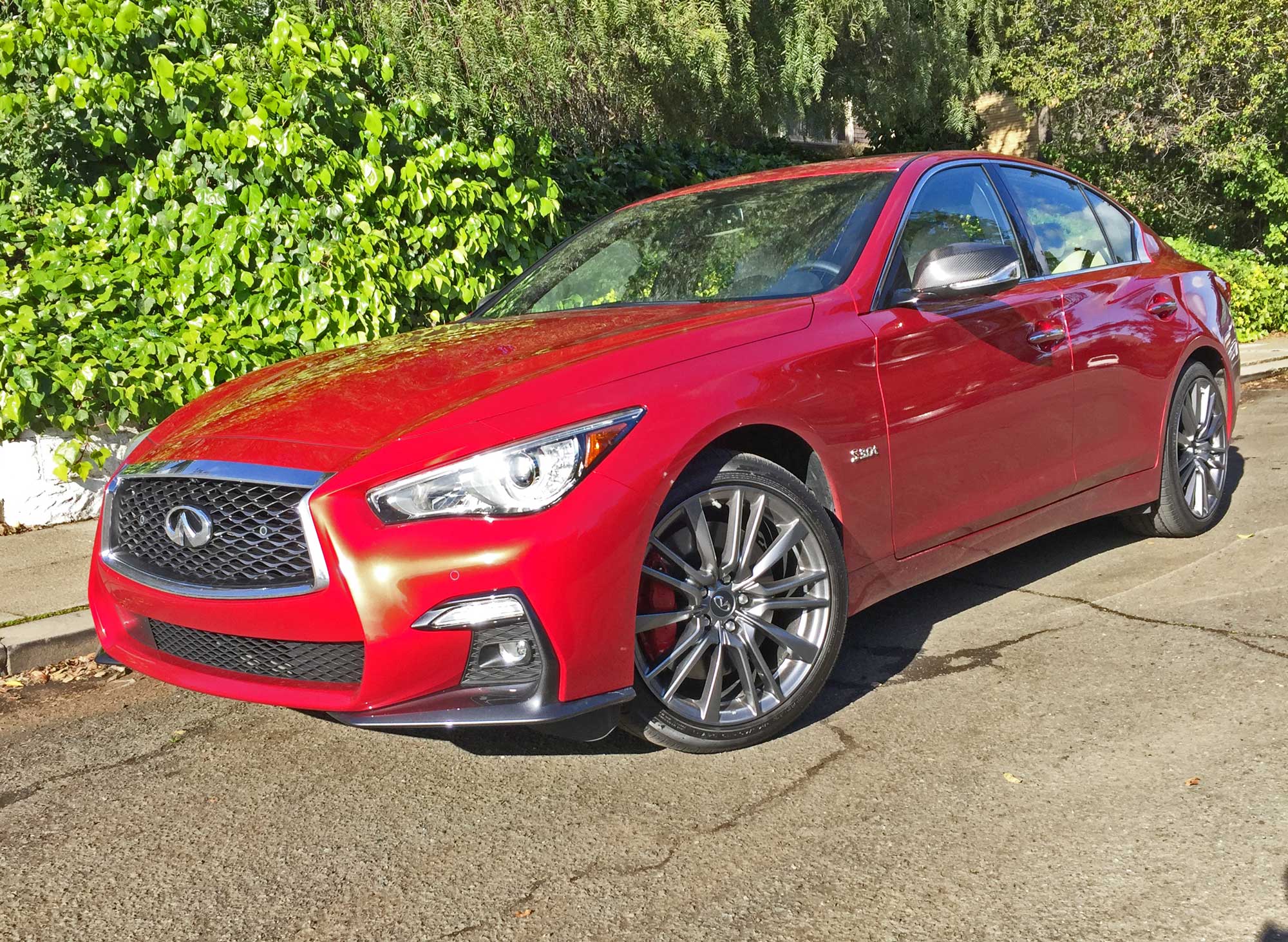