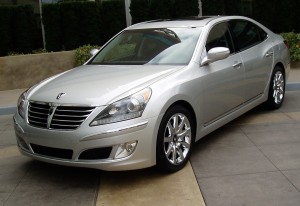 Hyundai?s All-new flagship sedan, the 2011 Equus made its North American debut at this year?s New York International Auto Show. Hyundai?s intent with this new luxury sedan is to compete on a global level with other premium marques in the segment on all levels ? design,? performance capability, amenity content, advanced technologies and the ownership experience as well.

Visually, the Equus displays a kind of understated elegance with some styling cues that are on par with those of other competitive Asian, British and German luxury sedans. It is a showcase of tasteful elements that blend harmoniously, delivering a pleasing and appealing overall form that satisfies the senses in an emotional way. Hyundai calls their new design aesthetic ?Fluidic Sculpture?. The Equus styling, which originated at Hyundai?s Design Center in Irvine, CA conveys dynamic strength, with an intelligent perspective on luxury.? 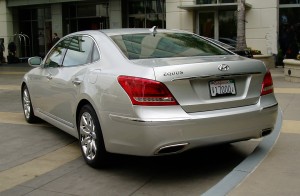 The large 4-door luxury craft comes in both a 4 and 5 passenger layout, with two distinct trim levels ? the base Signature Equus (5-passenger) and the Equus equipped with the Ultimate Package (4-passenger). Both models are essentially long wheelbase vehicles, with an extra long wheelbase version on sale in Korea. Already on sale in Korea since 1999, the 2011 second generation Equus, which was developed through a joint effort with Mitsubishi, is set to go on sale on our shores around November 1st. Hyundai has no current plans to sell the Equus in Europe. 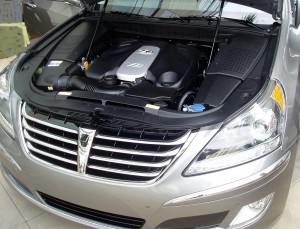 ?Power for the Equus will be supplied by a 4.6-liter, DOHC, 32-valve Tau? V8 with dual CVVT and Variable Induction System. the engine delivers 385 horsepower at 6,500 rpm along with 333 pound feet of torque at 3,500 rpm when fueled with Premium grade petrol ? the power ratings decline somewhat when using Regular octane fuel. The V8 engine mates to a ZF? six-speed electronically controlled automatic ?transmission with SHIFTRONIC? manual shift mode and lock-up torque converter. The powerplant is longitudinally mounted up front and drives the rear wheels. Mileage ratings are expected to be 16 mpg city and 24 mpg highway, with a minimum corporate average fuel economy goal of 50 mpg by 2025. An AWD version is scheduled to be added in the future.

Suspension is an Electronically-Controlled Air Suspension with Continuous Damping Control, along with height adjustable and driver-selectable Sport mode.

Equus will only be available in four exterior colors: Black Noir Pearl; White Satin Pearl; Granite Gray; and Platinum Metallic, with only three interior color combinations: Jet Black with Walnut trim; Cashmere with Birch Burl trim accents; and Saddle with Walnut accents. There are only 6 possible combinations, which simplifies ordering. 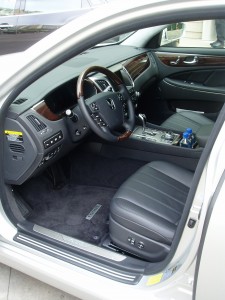 A bonus feature for every Equus buyer is an? i-Pad loaded with the owner?s manual and an application that allows scheduling service without a phone call. Another plus is Hyundai?s Valet Service Program that includes vehicle pickup and delivery with a service loan vehicle provided. Prospective buyers may schedule an at-home ?Your Time, Your Place? vehicle demonstration from one of 250 Equus dealers located in a store within a store dealership.

? During the national media launch, I was afforded the opportunity to drive both the Signature model Equus and the Ultimate model. The Signature was finished in White Satin Pearl with the Jet Black and Walnut interior, while the Ultimate model?s exterior sported the Granite Gray finish with the same interior as the

SUMMARY: ?The Hyundai Equus in Ultimate trim is a remarkable luxury sedan, with sporty attributes. It is visually appealing, in a way that is difficult to describe ? some observers felt that certain of its design cues resembled those of a Mercedes-Benz S550, while others likened some of its styling elements to a Lexus LS 460L.? Neither is a bad thing, as the Equus comes across as stylishly elegant in its own right. Other members of the Equus?s competitive set include the Audi A8L, BMW?s 750Li and Cadillac?s STS 4.6, though no physical, visual similarities exist.

Equus is not only appealing in the looks department, but in the performance and creature comfort categories as well. The 4.6-liter V8 cranks out more than enough horsepower and torque to please even the most discriminating driving enthusiast, while providing comfortable accommodations in a safe and secure environment. The speed sensitive, electro-hydraulic power steering delivers crisp handling characteristics, and the ride quality is compliant without sacrificing stability.

The six-speed automatic transmission allows for silky smooth gear changes? when in the automatic mode, and when in the manual mode, delivers well defined gear changes that are smooth as well. The only down side for several others and me was the manual gate placement, which is positioned to the right too far to the right to be exact. When reaching intuitively for the shift lever to effect gear changes, it wasn?t where one would expect it to be, but rather off to the right and back somewhat. Not a major issue certainly, as one owning the car would become accustomed to its position.

Pressing the Sport button, enhanced the driving experience even more, altering shift points, damping characteristics and throttle response, and putting the Equus into more of a Sport Luxury sedan category. Gauges and instrumentation are well? positioned for optimum user-friendliness, and driver seating is infinitely adjustable, allowing for the ideal driving position.

In the final analysis, other luxury sedan manufacturers should probably be more than a little nervous, given the attributes of the new Hyundai Equus Ultimate. 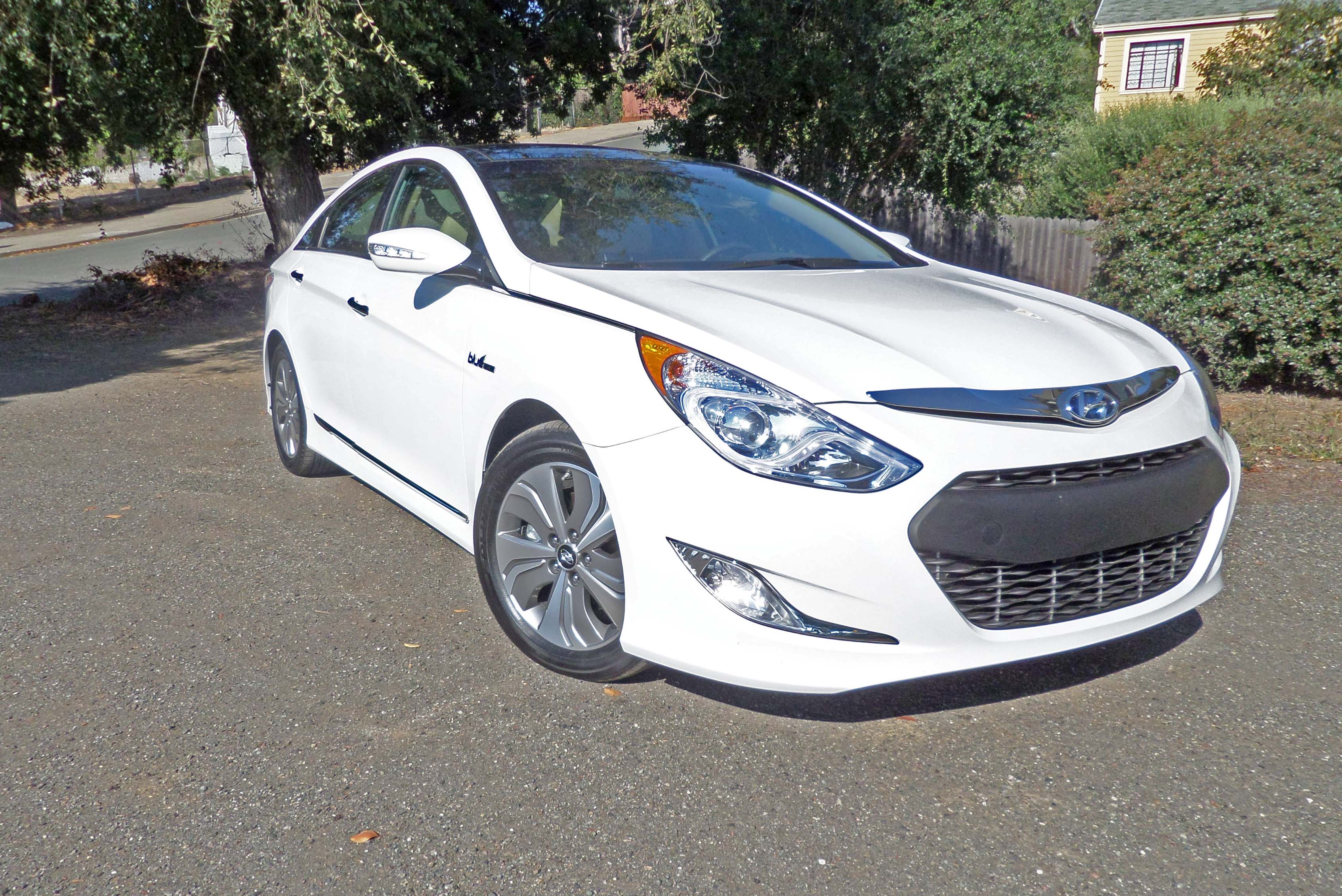 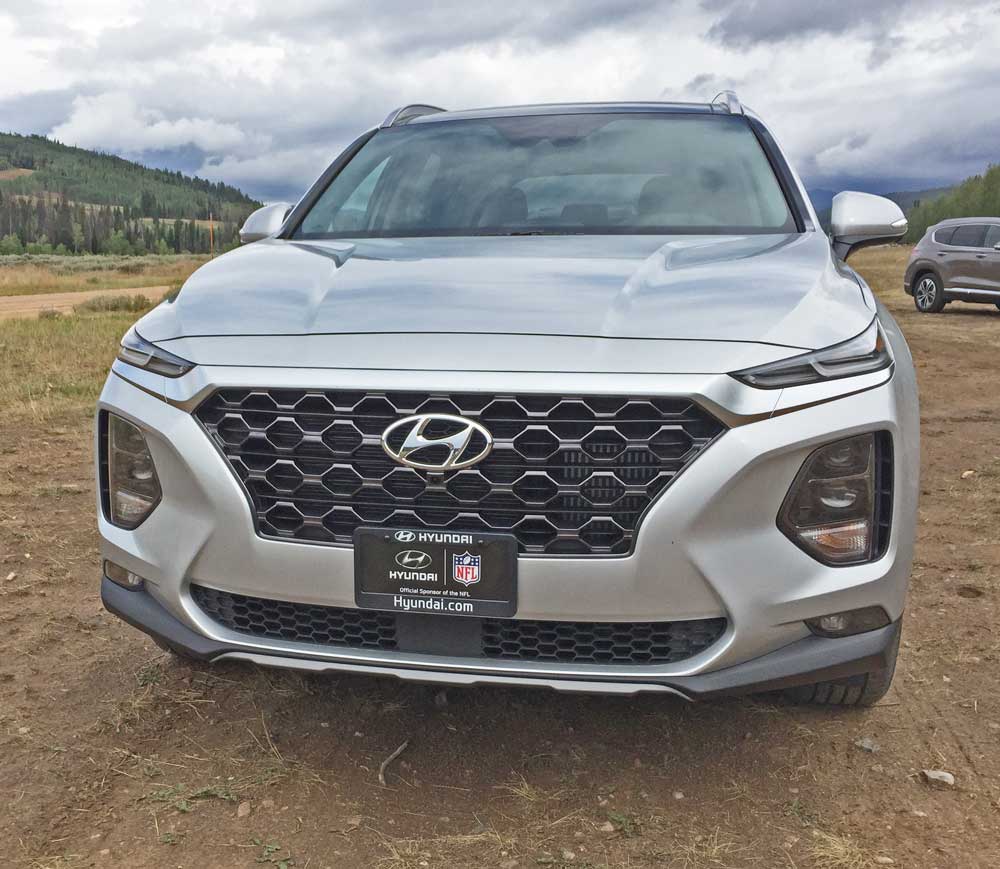