The benchmark just got better 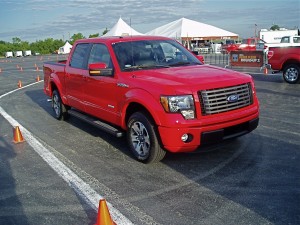 Ford has long touted the F-150 truck as the benchmark for the full-size pickup market segment. The Blue Oval team has produced more than 33 million F-Series pickups since 1948, when it first appeared on the scene. The redesign focus was geared to revising the popular truck to add more capability, more choices and innovative new features. That was in the past ?now, for the 2011 model year, the venerable F-150 pickup stable has only gotten better, by introducing the innovative EcoBoost engine into the powertrain mix.

Available as motive forces for the F-150 lineup are actually four new engines that provide up to a 20 percent improvement in fuel efficiency. The base engine is a 3.7-liter V6 that serves up 302 horsepower along with 278 pound feet of torque. Next up, is the workhorse 5.0-liter, 380 horsepower V8 that also delivers 380 pound feet of torque, and is shared with the new Mustang, but tuned for truck duty. There?s also a big block displacement 6.2-liter V8 that cranks out 411 horses and 434 pound feet of torque. The really big news though for the 2011 model year, is the 3.5-liter V6 EcoBoost engine that is capable of delivering the equivalent of V8 power, but with the efficiency and fuel economy of a V6 engine. The EcoBoost engine generates 365 horsepower (5 more horsepower than the 5.0-liter V8) and 40 more pound feet of torque (420), and all at a lower rpm to boot. 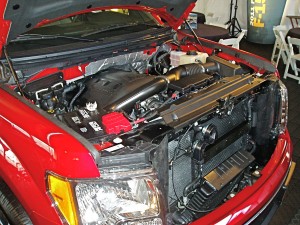 All four engines are coupled to a standard six-speed SelectShift automatic transmission with a standard tow/haul mode that reduces gear hunting and incorporates engine braking. The 3.7-liter V6 and 5.0-liter V8 run on regular unleaded gas and may be set up for Flex Fuel capability utilizing E85 fuel, while the 6.2-liter V8 and 3.5-liter Ecoboost V6 run on regular unleaded gasoline without Flex Fuel capability.

There?s also a 6.7-liter Diesel V8 available for heavy duty usage that pumps out 400 horses with a staggering 800 pound feet of torque ? got any stumps to pull?

Ford has claimed a record of 33 years as the best-selling full sized pickup truck, but up until now, that claim was made by breaking out Chevrolet and GMC truck sales as separate brands. That obstacle has now been overcome, and Ford is claiming supremacy over Silverado and Sierra combined, with a 39 percent market share ? their best since the 2001 model year. 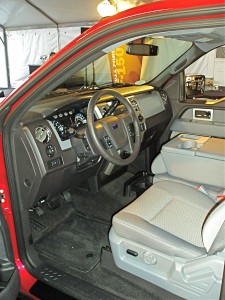 In addition to the new engines, with their enhanced fuel efficiency, styling enhancements and new models, as well as improved towing capability, class-exclusive electric power-assisted steering (EPAS), now improves steering feel
while contributing to fuel economy, is now included throughout the F-150 lineup. SYNC and Ford Work Solutions will continue as popular features for 2011. Interiors are enhanced too, with a variety of colors, textures and trims to choose from, with many bordering on the level of premium luxury sedans, without sacrificing the ?Built Ford Tough ? image.

The F-150?s pickup box continues to be easy to use, with high-level flexibility and accessibility featuring Ford?s industry-exclusive Tailgate and Box Side Steps, Stowable Bed Extender and Cargo Management System. Another unique feature is Ford?s Easy Fuel? Capless Fuel-Filler System – when fueling is completed and the nozzle is removed, the system automatically seals shut, reducing emissions.

My testing focused on the 2011 Ford F-150 FX2 4×2 SuperCrew model that was sprayed Race Red outside and featured Black leather-trimmed Captain?s seats inside. The base sticker read $35,435. While the final tally came to $39,640.

SUMMARY: During the national press introduction, based at Texas Motor Speedway, virtually all forms of the 2011 F-150 were supplied for evaluation. Journalists were divided into four major groups to facilitate in depth testing, which included: a Best in Class Power Drive, Best in Class Towing Drive, Competitive Drive and an EcoBoost Drive. 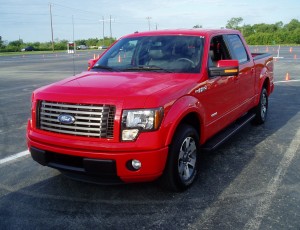 The Power Drive scenario included a Dyno lab that physically demonstrated the performance edge over competitive models, along with a Drag Strip competition between journalists in both Fords and other pickup brands. Ford consistently came out on top, while I didn?t fare well personally on the drag strip. Trailer towing also pitted Ford against other brands towing the same length trailer with a 6,700 pound payload over roughly a 60-mile course over hill and dale with freeway stretches as well. Again, Ford ranked as the most capable and smoothest. 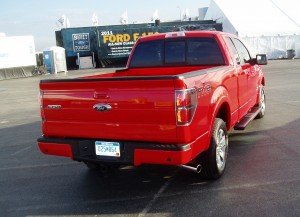 In the Competitive Drive test, journalists cycled through a number of competing brands over the same route for real-world comparisons that showcased the F-150?s prowess. And, finally, the EcoBoost Challenge delivered an average mileage rating in excess of 25 mpg, with the winning journalists recording more than 32 mpg.

Handling characteristics were surprisingly nimble, considering the FX2 SuperCrew?s overall dimensions. The revised cabin, along with all the technological features that have been integrated, make for a much more pleasurable trucking experience. In fact, there are many features in the 2011 F-150 that would have been unheard of even in a luxury car just a few short years ago. Ford continues to deliver significant improvements to their haulers that seem to be well ahead of the competition and that provide cutting edge performance and sought after capability.