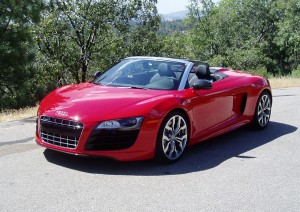 The R8 was Audi?s first mid-engined production sports car. It combined? the company?s experience acquired from a host of motorsports victories with unique and innovative styling as well as technological know-how.

When the 4.2-liter V8 powered R8 Coupe first appeared on the scene, it was revered as a fresh and innovative entry into the super sports car marketplace. Then along came a V10 version, and this auto writer was even afforded the opportunity to pilot the one-off R8 LeMans V12 TDI diesel Concept at Sebring two years ago. 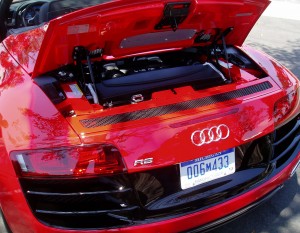 The latest V10 engine adds a full liter to the displacement at 5.2-liters. The DOHC, 40-valve, FSI direct injection engine cranks out a whopping 525 horses at 8,000 rpm, while also generating 391 pound feet of torque at 6,500 rpm. The mid-mounted mill is situated longitudinally and connects to either a six-speed manual gearbox or to Audi?s optional R-tronic sequential automatic transmission with manual mode and Launch Control function. The final drive is Audi?s Quattro permanent all-wheel drive system. The engine provides incredible thrust and delivers Audi?s unmistakable throaty sound when the throttle is prodded.

The mid-engine concept of the R8 model series necessitates a special layout for the quattro drivetrain. One drive shaft runs from the gearbox, which is mounted transversely behind the V10, through the engine to the front differential, where a viscous coupling distributes the power between the axles. In regular operation, it sends roughly 85 percent of the torque to the rear axle and can send up to 30 percent to the front within milliseconds, when required. A mechanical locking differential at the rear axle further improves traction. It provides a locking value of up to 25 percent when accelerating and up to 40 percent on the overrun. ?Weight distribution is 57% rear / 43% front. 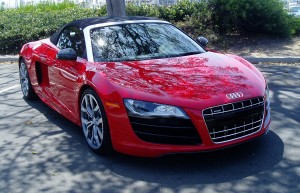 Now, at long last, for the 2011 model year, Audi introduces the R8 Spyder, which combines the breathtaking performance of the V10 with the added pleasure of open-air motoring. The R8 V10 Spyder can hurtle from 0-60 mph in 4.0 seconds with a top speed capability of 195 mph.

The stunning convertible sports car features a fully automatic lightweight cloth top in Black or Brown that weighs a mere 92.59 lbs., keeping the vehicle?s total?weight and center of gravity effectively low. When closed it blends harmoniously into the design line, ending in two slim fins or sail panels that extend toward the rear and displaying a contour similar to that of the Coup? hard top. Operated by a standard electrohydraulic motor, the top opens and closes within 19 seconds, while driving at speeds up to 31mph. The heated rear glass window is integrated separately into the bulkhead and may be raised and lowered via a switch with the soft top up or down. Audi also provides a wind deflector that can be installed in just two steps. The top is comprised of an outer skin of a leakproof textile fabric. A headliner covers the frame, large portions of which are made of die-cast magnesium and aluminum. The soft top is entirely suitable for high-speed driving and acoustically very comfortable. When driving at 80.78 mph with the top up, the wind noise level in the R8 Spyder is barely higher than in the Coup?, and at high speeds it is lower than in any of the competitor’s cars. The bulkhead includes integrated rollover protection in the form of two pretensioned plates. 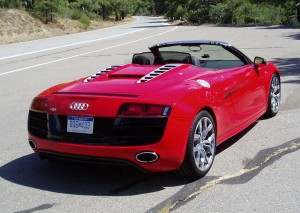 Visually, the R8 Spyder V10 quattro captures virtually everyone?s attention at the very first glance, with its lines offering a unique interpretation of the dynamics and emotion of a quintessential, high-performance sports car. Two distinctive silver cowls, into which the large air intake openings are integrated, give the long back-end a powerful profile. Unlike the Coup?, the R8 Spyder has classic air intakes behind the doors. The rear side panels and the large cover over the storage compartment for the cloth top are made of a carbon fiber composite.

The R8 Spyder rides on double triangular wishbones made of aluminum at all four wheels, and the hydraulic rack-and-pinion power steering conveys a highly- precise road feel. The standard suspension includes the high-end Audi magnetic ride technology, in which the shock absorbers adjust their response to the road conditions and the driver?s style within milliseconds. A sports suspension with conventional shock absorbers is available as an option. ??The Spyder rolls on 19-inch wheels shod with staggered Pirelli P-Zero high performance rubber 235/35 ZR19 up front and 295/30 ZR19 in the rear mounted on 5 split ?Y?-spoke alloy wheels.

Braking duty is handled by four brake discs that are internally ventilated and perforated, and are gripped by a total of 24 calipers. Optionally available from?Audi are large carbon fiber-ceramic discs that are lightweight, robust and long-lived. The ESP stabilization system has a Sport mode, which may be completely deactivated at will.

My test Audi R8 V10 quattro Spyder wore an exterior finish of Brilliant Red ?, with the interior done in Black highlighted by aluminum trim accents and rubber studded pedals. It came with the 6-speed, gated manual gearbox, and the base price was set at $161,000 which escalated to ?$180,000. When loaded with features such as: Audi?s MMI Navigation with AMI iPod interface, Bang and Olufsen premium sound system, auto noise leveling system, Audi Park system with Rear view camera and Destination charge.

SUMMARY:? The Audi R8 V10 quattro Spyder trumps sliced bread, bubble-gum and Ferrari. Yes, I said Ferrari. Mind you, the Ferrari is nothing to sneeze at, but the uniqueness of the R8 Spyder and its considerably lower price point rank it above the Italian supercar.

The R8 Spyder is sexy, well proportioned and exquisitely styled with all lines flowing in integrated harmony. The unique LED headlamps resemble seashell reflectors and were patterned after famed Opera House in Sydney, Australia. The interior layout is ergonomically friendly, with gauges and instrumentation thoughtfully well positioned. Seats are both comfortable and supportive and the ride quality is surprisingly compliant while delivering excellent stability. 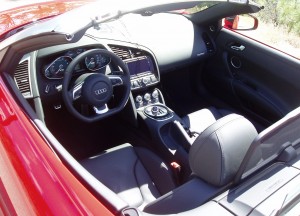 The interior accommodations provide a totally driver-oriented cockpit arrangement that places the driver between the dashboard and the high center console. The instrument panel above the console is angled slightly towards the driver, and the flat- bottomed steering wheel is typical of the sportiest Audi models, facilitating ease of ingress and egress. There is generous space for the two occupants, where comfort levels are well beyond the average found in most high-performance sports cars. The luggage compartment up front has a capacity of approximately 3.5 cu. ft.

The R8 Spyder is also well balanced with spot-on steering response providing precise and nimble handling characteristics. The Sport setting provides an even higher level of performance enhancement for more spirited driving scenarios. In the final analysis, the Audi R8 is definitely a car to lust after for those requiring the ultimate in performance and high-speed open-air motoring. Move over Ferrari. 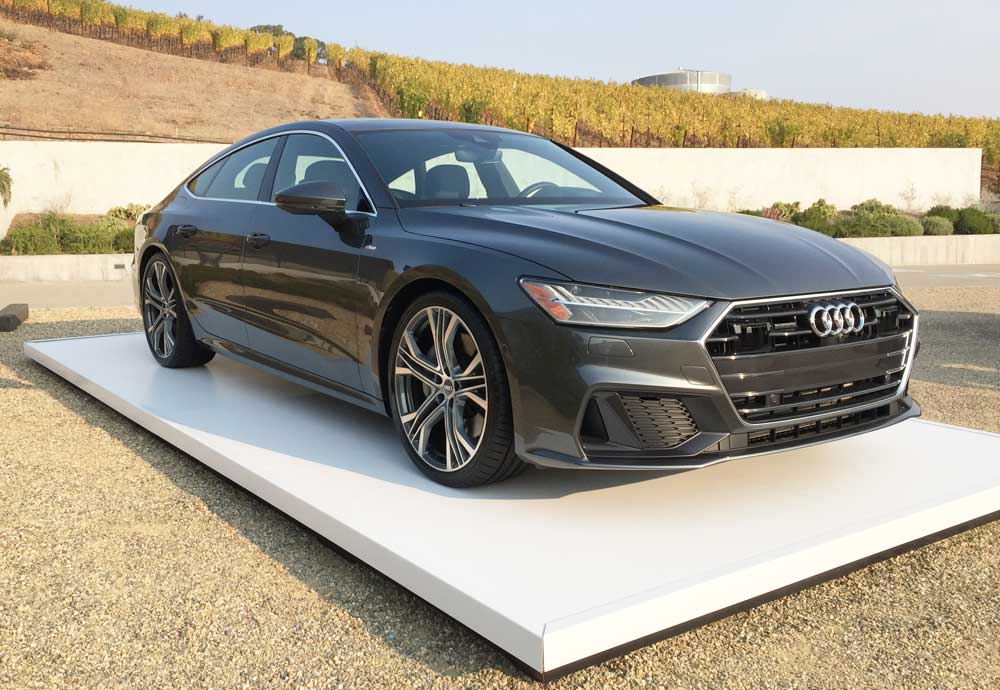