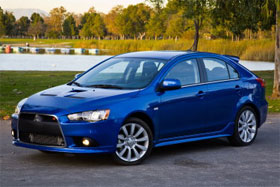 Back in the first golden age of sports cars during the 1950s and 60s, automakers had a habit of producing their sports cars in a basic version, a super-duper hot rod version, and then a kind of in-between version. The in-between car was often idiosyncratic and nearly always reflected the factory design team?s conception of how the car really should feel. In other words, those cars hit the sweet spot between performance and comfort at an attractive price.

Thus, cars like the Porsche 356SC and 911SC were perhaps not as fast as the Carrera models, but had a certain balance of comfort, performance, and longevity that made them the favorites of those who really knew and understood the breed. Ferrari, Alfa Romeo, and other serious sports car players also made these special low-production models. If you check your trivia, you?ll find that people like Sergio Pininfarina, Enzo Ferrari, and Ferry Porsche tended to drive these special cars rather than the all-out performance models. 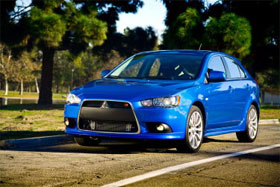 So, fast forward to the Mitsubishi Lancer Ralliart Sportback. Ralliart is Mitsubishi?s in-house style and performance shop. The shop is a semi-independent company, 100% owned by Mitsubishi and dedicated to motorsports and specialty editions of Mitsubishi automobiles. The shop serves the save function as STI for Subaru and MAZDASPEED for Mazda.

The Mitsubishi Lancer comes in a variety of flavors, from the most basic $13,990 Lancer DE to the $38,290 top of the line Evolution X MR. The Evo is a 300 horspower, 300 pound-feet of torque, AWD, maximum performance car – comparable to the Audi S4. The basic Lancer is a front wheel drive family car with a peppy 152 horsepower 2.0-liter engine and your choice of CVT or 5-speed transmission. You can also get the Lancer in an uprated ES and sporty GTS package, but there has been a big gap in both price and performance between the top $18,990 Lancer GTS and the Evo. 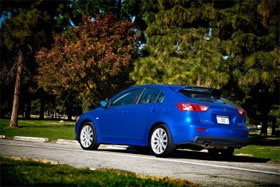 So, the stage was set for the Lancer Ralliart sedan and now the Lancer Ralliart Sportback hatch. The Ralliart design bridges the gap between the fun Lancer GTS and the awe-inspiring Evo by taking the best points of each and placing them in a balanced, affordable package. The Sportback delivers the performance in a convenient hatchback design.

The Ralliart Sportback offers you 235 horsepower and 253 pound-feet of torque from the same basic engine that powers the entire Lancer and Evo line. ?This is not a detuned Evo engine. It?s a stepped-up Lancer engine,? says Mitsubishi Product Planning Manager Brian Arnett. Mitsubishi set this engine up with their own popular TD04 single-scroll turbocharger, also used by Subaru in the WRX. The Evolution, by contrast, uses the twin-scroll Mitsubishi TD05 turbo. The Ralliart also receives a smaller intercooler than the Evo, and different engine programming.

The Ralliart Lancer Sportback gives you the same AWD ?clutchless manual? transmission carried over from the ultimate hot rod Evo MR. No 5-speed manual transmission is planned for any Ralliart Lancer. Remember, this car is not designed for everyone; it?s what the enthusiasts at Ralliart think it should be. 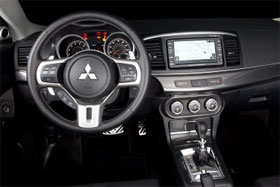 What this says to me is that Mitsubishi has left a lot of power conveniently in reach of the aftermarket tuner, if you want it. But after driving the Ralliart, I have to say it would be a shame to unbalance the car by upgrading the power without also upgrading the suspension, brakes, and so on. And at that point, why not just buy an Evo and get all that stuff right up front with a warranty?

The Ralliart Sportback uses similar bodywork to Subaru?s WRX, so you don?t get the wide-stance ?boy racer? fender flares of the Evo or STI, but you do get the lightweight vented aluminum hood from the Evo to distinguish the Ralliart from the normal run of the factory. You also get uprated brakes from the larger Outlander SUV, but again, not as much brake as the Evo.

Because the Ralliart Sportback is a complete package, there are only two options available. The factory option includes Recaro seats, a nice stereo, and HID headlights. You can also have the navigation system installed at the dealer. Base price on the Ralliart Sportback is $27,590, but by the time you get the Recaro Sport option package put on, the Ralliart is about a $31,000 car.? Yes, you?re going to want the option package ? it includes Recaro seats, HID headlights, 710-watt Rockford-Fosgate stereo, and a 6-CD/MP3 stereo head unit. Don?t argue, just buy it.

Driving the Ralliart Sportback is a joy. It?s a bit softer than the Evo, but still has plenty of get up and go. With the Evo, you?re always aware that you?re in the hot rod. You?ve got ?tons of brakes,? as our track driving instructor said, and you?ve got even more power under your foot. But the Ralliart was perfect for a brisk drive down a winding country road. We passed a garbage truck like it was, well, a garbage truck. The Ralliart moves sinuously through curves – not as flat as the Evo, but definitely a true sports car.

In the Evo, you get three engine performance modes – Normal, Sport, and Super Sport. That?s reduced to Normal and Sport in the Ralliart Sportback, but unless you?re planning an all-out track assault you won?t miss Super Sport ? and if that?s what you want, you should buy an Evo. More importantly, the Ralliart gives you the same three modes as the Evo for your AWD system. You have your choice of tarmac, gravel, and snow modes.

The Lancer Ralliart Sportback is aimed squarely at the Subaru WRX, Volkswagen R32, and MAZDASPEED3. Of the three, it?s the Subaru WRX that has always been Mitsubishi?s main competition. Subaru?s latest interpretation of the Impreza line has met with lukewarm support from the press and enthusiast community, so Mitsubishi is poised to capitalize on that weakness with the Ralliart Sportback.

The bottom line on the Lancer Ralliart is that Mitsubishi has hit that same sweet spot formerly occupied by the Porsche 356SC and the Ferrari GT Berlinetta Lusso. Those are the cars Ferry Porsche and Enzo Ferrari chose to be their own daily drivers. Why not choose a Lancer Ralliart Sportback for yours? 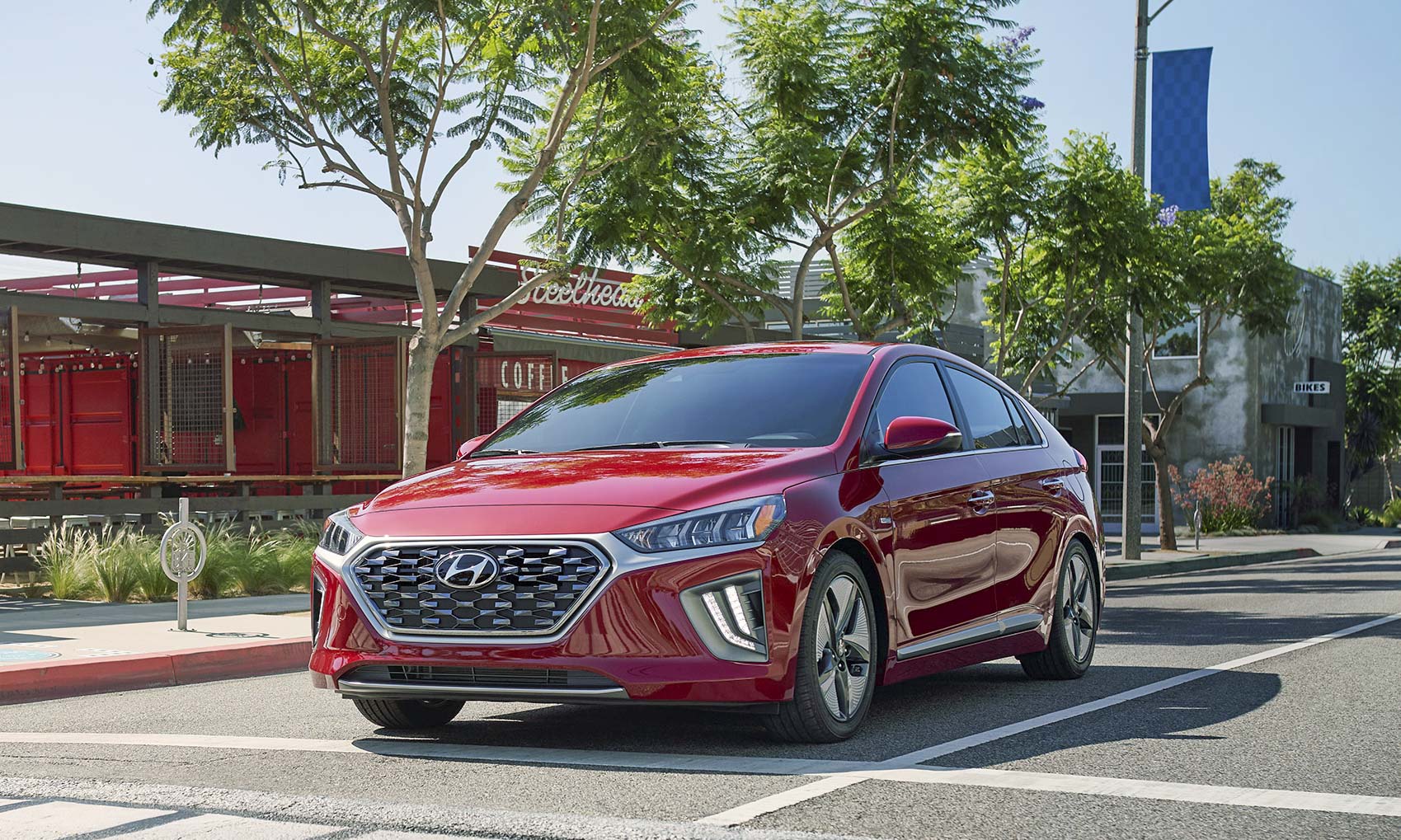 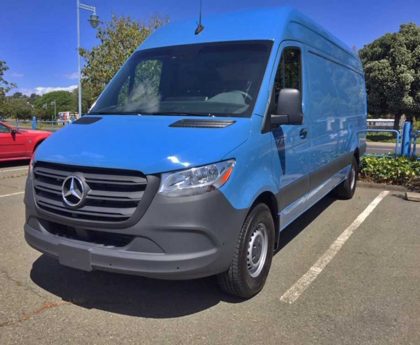