Finally, a Lotus that fits without assuming Lotus position

In the past, I avoided any opportunity to pilot Lotus vehicles due to their exceptionally diminutive and compact size. The Exige and Elise were much like sitting on the ground in a contorted position in a confined and restricted space. Those factors not withstanding, I really am not a huge fan of the styling ? particularly of the Elise, which to me resembles a flattened insect. Okay, it really isn?t that bad, and it does seem to have a loyal following ? probably for its performance qualities however and not necessarily for its looks.?

The aforementioned issues have been eliminated with the introduction of the Evora which looks terrific, provides 2+2 seating, and is actually possible to get into and out of without imitating a pretzel. There is also a 2+0 seating configuration optionally available.

?The 2010 Lotus Evora comes in coupe form, featuring only two doors but featuring four seating positions. Power for the Evora comes from a Cosworth modified and tuned, Toyota-based 3.5-liter DOHC, 24-valve V-6 with Dual VVTi, electronic returnless fuel injection and Lotus T6E engine control unit. The engine is positioned amidships in a transverse orientation and makes 276 horsepower at 6,400 rpm, while generating 258 pound feet of torque at 4,700 rpm. Motive force is metered to the rear wheels via a six-speed manual gearbox, which is available in two forms ? a standard ratio version, or an optional Sports ratio unit. The Evora is capable of accelerating from 0-60 mph in 4.9 seconds. Top speed is limited to 162 mph.? 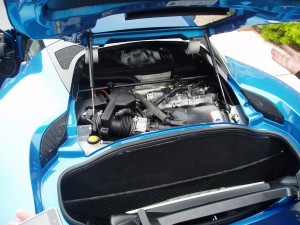 Whoa power is handled by servo-assisted, four-wheel ventilated discs with optional cross-drilling),? Lotus-tuned Bosch ABS system, hydraulic Brake Assist, Electronic differential lock and EBD. 60-0 mph braking is world class, requiring only 100 feet. In terms of its styling, the new Evora is not unlike a mini-Ferrari in its imagery ? particularly from the rear. The coupe body style is exceptionally sleek with a drag coefficiency of 0.33. It is indeed striking, exuding loads of sex appeal (for either gender actually). The interior accommodates two comfortably up front and two not so comfortably in the rear seat. Instrumentation and switchgear is logically placed for optimum user friendliness with one exception ? the auxiliary power outlet is positioned at the rear of the center armrest, and is difficult to reach. It?s fine for charging a cell phone, but stretching a radar detector cord from the windshield is prohibitive. The flat-bottomed, three-spoke, leather-wrapped steering wheel is fat and comfortable.

My test 2010 Lotus Evora 2+2 Coupe wore an exterior finish of Laser Blue metallic, while the interior was done in Charcoal with genuine aluminum trim accents. The base price was set at $73,500 while added options increased the total to $76,000. Base sticker for the 2+0 version is $72,990. The Evora comes with an impressive inventory of standard features and equipment, but it?s possible to upgrade and personalize one?s Evora by adding one or more of the following options: the Sport Package; Premium Package; Technology Package; Alpine IMPRINT Dynamic EQ; Alpine Reversing camera; Electric power-fold outside mirrors; Sports-Ratio gearbox; metallic paint; and Destination charges.?

SUMMARY: ?In a special preview program coordinated? by Lotus Cars of the UK and Lotus Cars USA, Inc., local automotive scribes were introduced to three new exciting Lotus vehicles on the Monterey Peninsula in California: the 2010 Lotus Evora Roadcar; the Lotus Evora Cup GT4 Car in its North American debut; and the World Premiere of the unique Lotus 125, the ultimate consumer track and race car. 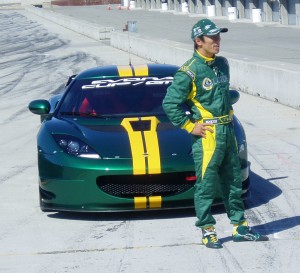 Participating journalists were afforded the opportunity to experience firsthand the Lotus Evora roadcar and the Evora Cup GT4 on the fabled Mazda Laguna Seca Raceway. Each auto writer was able to pilot the street version of the new Evora around the track under the tutelage of noted professional racecar drivers Jimmy Vasser, 1996 IndyCar Champion, Takuma Sato, Lotus IndyCar and former Formula 1; and Johnny Mowlem who holds the track speed record at Laguna Seca. Journalists were then treated to ?hot laps? with the pro drivers.?

The Evora roadcar exercises were followed by laps at speed in the new Evora Cup GT4 car, which is a turnkey class racer (that will sell for a base price of $159,950 or roughly $170,000 loaded), driven by the professional racers. The Lotus 125 was a prototype car that will sell to private individuals as part of an?EXOS Experience, members only program for $995,000. Only 25 EXOS experience racers will be built and available for purchase.

The GT4 Cup car draws is motive force from a 4.0-liter version of the Toyota V6 that is also Cosworth-tuned, and the Lotus 125 is a Cosworth developed, normally aspirated, 32-valve V8 that makes 640 horses. Neither car is street legal. 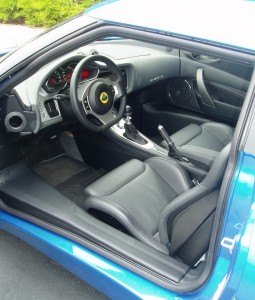 The Evora?s strong suits are ample power on demand with an exceptionally broad torque range which minimizes shifting (the addition of a supercharger would be an obvious and desirable improvement), excellent braking capability and an incredibly compliant suspension over even rough road surfaces. The only negative encountered was the limited footwell space with no dead-pedal, and the distant placement of the auxiliary power outlet (positioned aft of the center armrest).

Racing legend and 1996 IndyCar Champion, and native Californian, Jimmy Vasser In addition to his championship in 1996, the California native was runner-up in 1998 and placed third in the standings in 1997. Vasser is one of the most recognized names in open wheel racing.

I was teamed with Vasser, who rode along, offering racing pointers as well as personally demonstrating his racecar handling prowess in ?Hot Lap? exercises on the fabled Laguna Seca track in both the street legal Evora and the GT4 Cup car, I also shared driving duties in an exhilarating road drive over some of Carmel Valley?s most challenging roadways.

The Evora is planted and compliant over even the most demanding road surfaces, and the steering is spot on and instantly responsive. Acceleration is surprisingly quick for a normally aspirated V6.

The Evora enters the sports car marketplace as the only mid-engine 2+2 production vehicle. It is designed for drivers who want an exotic, stunningly styled performance oriented vehicle, and it?s covered by a 3-year/36,000-mile limited vehicle warranty with an 8-year chassis perforation warranty. And, best of all, it now fits drivers who are well over 6 feet tall. 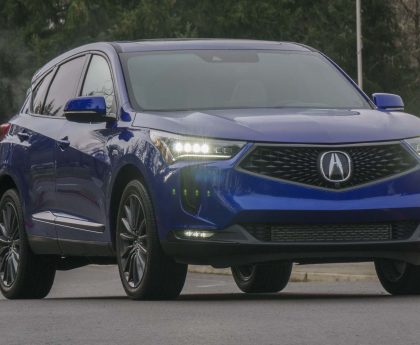 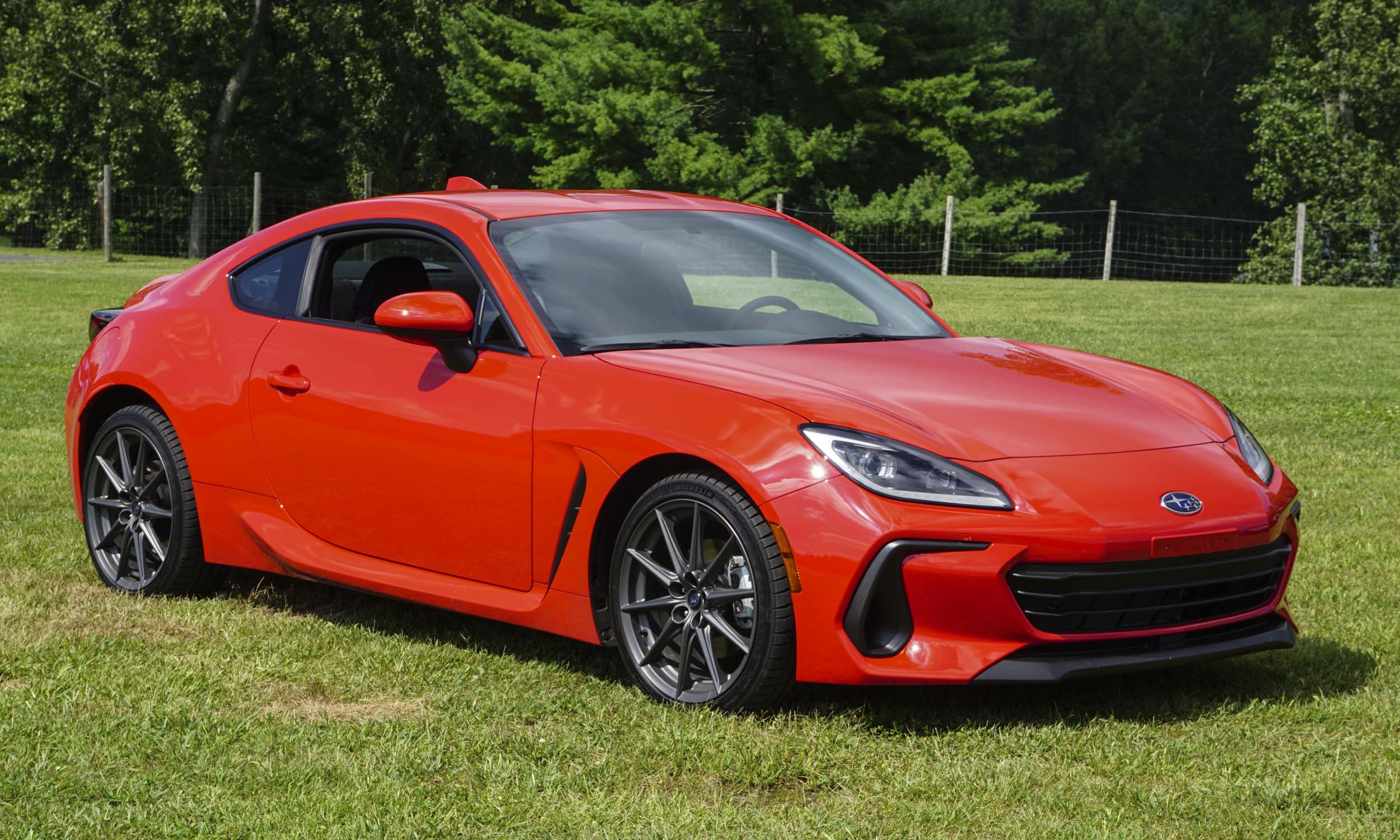