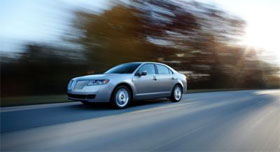 Zephyr is a name that goes way back with Lincoln ? although it sounds funny to our ears, a Zephyr was originally a North African word for a light westerly wind, and in the 1930s, Lincoln-Zephyr was the name chosen for a line of lower-priced luxury cars from Ford. The name was used in Europe on Fords in the 1950s and 1960s, and most recently made an appearance with Lincolns built on the CD3 platform common to the Ford Fusion and Mercury Milan.

The latest Lincoln Zephyr has mercifully been renamed the Lincoln MKZ ? a tag that is much more in tune with modern naming conventions. Following Lincoln?s current ?MK? convention, the Z still clearly stands for Zephyr, but the new name should appeal to a younger audience. 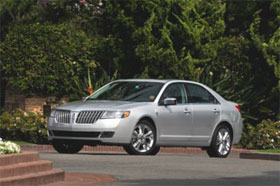 OK ? so now we know why it?s called what it?s called, but what is the MKZ?? It?s a four-door sedan built on a C/D (mid-size) sedan platform, also used on Ford Escape CUVs and a bunch of other Ford products. On this platform, Lincoln has built its most youth-oriented car.

The MKZ is smaller than other Lincoln offerings, and designed to highlight the bling. From the chromed-up side mirrors to the big bold grille, this is a car designed to be noticed while staying within the universal C/D segment design parameters ? which is to say, the MKZ doesn?t look remarkably different from any other automaker?s mid-sized sedans.

The MKZ comes with a 3.5-liter Duratec V6 engine, offering 263 horsepower and 249 pound-feet of torque. That power runs through a 6-speed automatic transmission in a front wheel drive or optional all wheel drive configuration. Fuel economy is not great ? the AWD version gets 17 MPG in the city and 24 on the highway. Combined real world mileage is about 19 MPG, 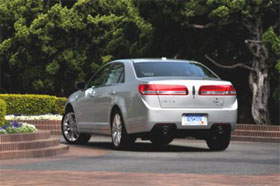 which is towards the bottom of the mid-size category these days. The front wheel drive version is substantially better, at 18 and 27 MPG. But you get comparatively more horsepower than in other midsize cars, plus AWD, so it?s a tradeoff you can understand.

The interior of the MKZ is nice ? controls and gauges are well-placed, and the seats are comfortable. You get fully automatic seats, trimmed in leather and both heated and cooled. You get a nice stereo and hands-free phone system with Ford?s unique SYNC voice activation system, and there?s an optional technology package with a backup camera, GPS satellite navigation system, and zone climate control.

One feature I have to single out for praise ? the MKZ, like many Ford products this year, has no gas cap whatsoever. When you close the fuel filler door, the door itself functions as your gas cap, so it can never get lost or stolen. It?s such a good idea, you have to wonder why automakers haven?t adopted this design years ago. 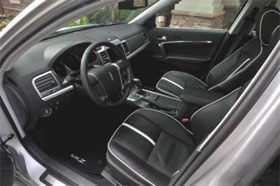 Driving the MKZ is fun ? the AWD is sure-footed and smooth as you expect from a Lincoln, and the car carries a full complement of traction and stability control features. In a week on the road, I truly enjoyed this car. I was comfortable, didn?t feel shortchanged in the sporty driving department, and I generally found the MKZ to be perfectly pleasant under all circumstances.

In addition to the traction and stability control, the MKZ offers families a complete package of safety features, starting with the available AWD. It?s been pouring rain for 6 weeks around here, and the MKZ handles the slippery conditions like they?re not even there.

One more safety feature I have to single out on Ford-family products is BLIS ? the Blind Spot Information System. This uses radar to tell you when there?s a vehicle in your blind spot ? another feature that all automakers should adopt. The MKZ also features Cross Traffic Alert (CTA), which is a side-looking radar that warns you when traffic is coming as you back out of a parking space.

The 2010 Lincoln MKZ starts at $36,005, and as tested with the technology, navigation and several other appearance packages, the MKZ was priced at $42,395. If you?re shopping BMW, Lexus, Acura, and other luxury brands, you?ll want to include the MKZ in your test-drive plans. 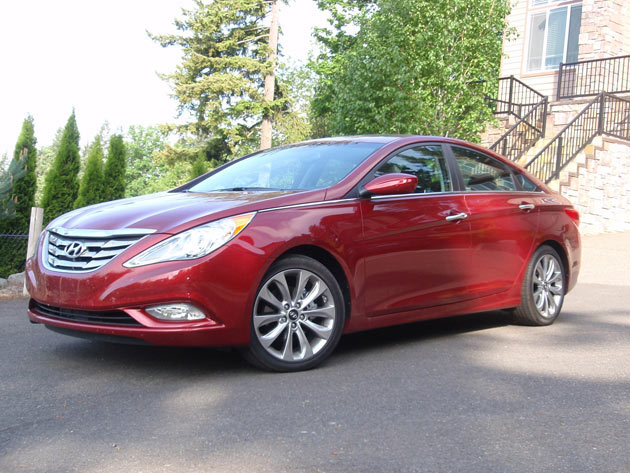