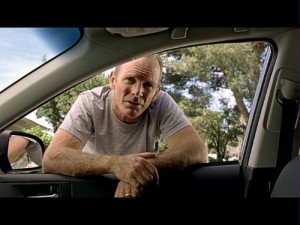 We like Subaru?s new television spot that has a little girl aged six, sitting in the driver’s seat of a Subaru Legacy with her father speaking to her through the passenger side window. She smiles patiently as her father gives her the “safety talk.” As he hands her the keys, we realize that all along its been a 16-year-old waiting for her first ride alone whose Dad still sees her as his “little girl.”

“Most parents dread that moment when their children first take the wheel alone. It’s momentous,” said Kevin Mayer, director of marketing communications, Subaru of America, Inc. ?”We talked about this with our agency, Carmichael Lynch and we loved the idea of building a story around that moment through the eyes of the father. ?The fact that ‘he bought his Subaru, because he knew this day was coming’ further highlights the reasons that people buy Subarus ? our top safety and reliability ratings. We also know that many of our owners ‘pass down’ their Subarus to their children since they are so highly rated and we wanted to show that too.” 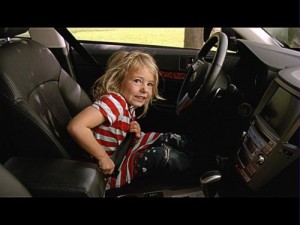 Andy Lyons, who plays the concerned father is actually experiencing this moment in his own life. “As father to both the girls, portraying those complex emotions on-screen was not a stretch for me. Having my first daughter, Lanna reach driving age and knowing that my second, Georgie, will be there all too soon, I understand the anxiety of handing over the keys for the first time.”

The spot also outlines the inherent safety of Subaru vehicles and in looking to authentically portray that “hand-over moment” the company felt fortunate in finding the Lyons family. “When we found this family we threw out the script,” added Mayer. “We simply asked the dad, what would you tell your daughter before she pulled away? The dad took it from there and he was perfect.”

National Teen Driving statistics at?rmiia.org show that motor vehicle crashes are the leading cause of death among 15- to 20-year-olds and that 16-year-olds have higher crash rates than drivers of any other age.

According to the Insurance Institute for Highway Safety (IIHS), teenage drivers have the highest crash risk per mile traveled, compared with drivers in other age groups. The problem is at its worst among 16 year-olds, whose driving experience is the limited and whose immaturity often results in risk-taking.

“Making the right vehicle choice for teens with both active and passive safety features can be critical in increasing their safety while on the road,” states Mayer. ?”That ‘Moment’ is a real worry to many parents and we hope that our spot gets people to think about what to look for when shopping for vehicles for teen drivers.”

As well as being durable, dependable and fun-to-drive, Subaru vehicles are consistently named Top Safety Picks by IIHS. The company’s focus on All-Wheel Drive technology is another strong safety feature that helps improve driver control.

The spot can be seen at?http://www.youtube.com/baby driver.