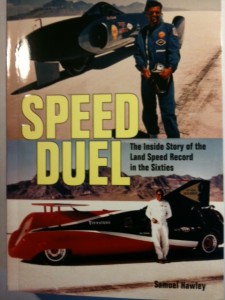 If you think 100 mph is fast, just imagine 601 miles per hour.? That what Craig Breedlove did on November 15, 1965 after a back and forth competition with Art Arfons to beat the world speed record.? Author Sam Hawley has captured the quest to that top speed in his book Speed Duel: The Inside Story of the Land Speed Record in the Sixties.

Hawley follows the two drivers along individual paths that took them to the Bonneville Salt Flats in their passion for speed.? The new paperback book shows the whole process of from concept through raising money, building the cars and all the victories and defeats they encountered along the way.? It also exposes the personal tragedies of failed marriages, running out of money and the accidents and injuries.

One of the tragedies described when Arfons? car, the Monster, exploded and tumbled down the salt at high speeds with pieces scattering down the track.? Arfons was alive when pulled from the wreck but covered in blood and unconscious.? Radio reports said he died on the way to the hospital.? Then his family was told that he survived and was in ?satisfactory condition.?? When a long-time friend arrived at the hospital after clearing the debris from the track he arrived at the hospital to find Arfons? bed empty?then he heard water running in the bathroom and found Arfons taking a shower.

Speed Dual puts the reader on the salt in a fast-paced heart-stopping account of the 1960?s race to go faster and be the fastest as speed went from 400 to 500 and then to 600 mph.

The 360-page paperback ?is a 6-in. by 9-in. format and includes numerous black and white photos and documentation.? It is published by Firefly Books and is available in bookstores.