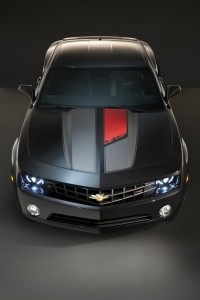 Chevrolet is celebrating the 45th anniversary of the iconic Camaro with the release of a special edition that highlights the new version of the standard 3.6-liter direct injection V-6 engine, a new FE4 performance suspension package for SS coupes and several interior and technology improvements.

The 45th anniversary Camaro arrives this summer and gives buyers all the 2012 upgrades, along with the special edition interior and exterior design enhancements.

?The appeal of Camaro design and performance has powered it to the top of its segment,? said Rick Scheidt, vice president of Chevrolet marketing. ?For 2012, we?re capitalizing on that momentum with enhancements to Camaro?s performance and comfort.?

The new 3.6-liter V-6 engine (the LFX) goes into production this summer.? Rated at 323 horsepower, this engine is up 11 horsepower from the existing V-6, with no fuel economy penalty.

The LFX delivers the most standard power in the regular sports car segment. It is also 20.5 pounds lighter than its predecessor, which promotes a more balanced driving experience. EPA-estimated highway fuel economy for the ?12 Camaro is 30 mpg (2LS model). 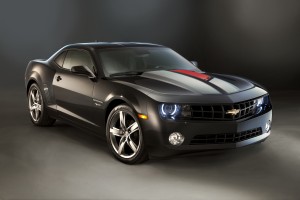 The Camaro SS coupe gets the new FE4 suspension in 2012, focusing on more refined handling by returning the front and rear dampers, adding new front and rear solid stabilizer and topping it off with 20-inch aluminum wheels with P245/45R20 front tires and P275/40R20 tire in the rear.

?Our objective was to create a more precise sport suspension for the SS coupe, with greater road-holding capability,? said Al Oppenheiser, Camaro chief engineer. ?We applied lessons learned from extensive track testing to better refine the suspension geometry for flatter cornering, a more neutral balance during hard turns, and minimized understeer at the limit.? 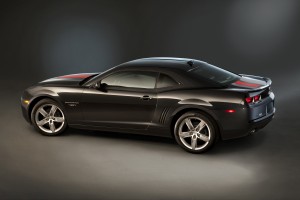 The 2012 model year brings appearance, ergonomic and technology upgrades inside for Camaro drivers and passengers. The interior updates include a revised instrument panel appearance, with new instrument graphics and trim, as well as a new steering wheel design and a power lift feature for the front passenger seat. The steering wheel features a fresh new look and ergonomic improvements intended to support performance driving.

Also new for Camaro in 2012 is a Rear Vision Package, which adds a rearview camera system and an auto-dimming mirror to the existing Rear Park Assist feature. The rearview camera system complements the rear parking assist by providing a video display of the area behind the car, with the video image appearing in the car?s inside rearview mirror.

On the exterior for 2012, a new rear spoiler will be added as a standard feature for Camaro; and the taillamps that had been a part of the RS appearance package option are also being made standard. Additionally, a new, body-color ?sharkfin? antenna joins the RS package. 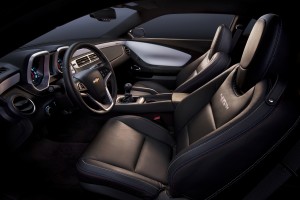 The 45th Anniversary Special Edition commemorates both Camaro?s lineage and its 21st-century revival. The anniversary package will be offered on Camaro?s top two trim levels (2LT and 2SS) for both coupe and convertible body styles.

The exterior signature of the 45th Anniversary Special Edition is its unique rally stripe, in red and silver, that contrasts the Carbon Flash Metallic paint. The package also includes: 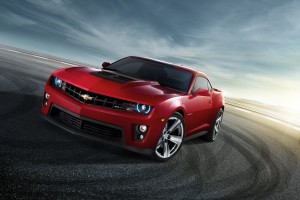