?The Ford Showroom gives players an opportunity to check out our vehicles in an environment where most people wouldn?t expect to see Ford,? said Brian McClary, Ford social and emerging media specialist. ?It?s another example of how we?re providing customers with ways to engage with Ford on their own terms in their own way.?

Ford visual Showroom users can view the interior and exterior of the Fiesta and Edge, check out Ford SYNC? in-car connectivity system, and play a game with digital rewards that include a T-shirt with the Ford logo.

?The Ford Showroom in PlayStation Home is the perfect place for people to explore, interact with and share these highly recognizable and popular vehicles,? said Amy Carney, president of advertiser sales for Sony Pictures Television. ?Their SYNC technology also has strong synergies for creating highly interactive and engaging game experiences.?

To experience the virtual showroom, the player directs the person he or she controls ? called an avatar ? to enter the Ford Showroom, then receives a virtual T-shirt with the Ford logo for the avatar and for just walking in the door. 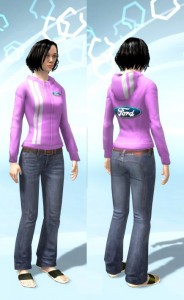 The avatar walks around the showroom and views the Fiesta and Edge. A virtual Ford representative greets all avatars and introduces them to the vehicles and games. Avatars are encouraged to get inside a vehicle to experience a version of its interior with true-to-life detail such as the location of key controls.

?Special attention has been given to the details of the vehicles so that users get as close to a showroom experience as possible,? said McClary. ?We want users to really feel like they are inside one of the vehicles.?

Users have the opportunity to pair a virtual mobile phone, already in the car, with SYNC. Once paired, the SYNC system will start and a game menu will appear. They will be able to play three quests: Music Quest, Turn-by-Turn Quest and Phone Quest.

In Music Quest, avatars plug in an MP3 player and receive audio instructions that lead to a mini-game in which players take part in a music-based activity. If completed successfully, players receive a SYNC-branded virtual MP3 player with docking station that they can take to their own PlayStation Home apartment.

Turn-by-Turn Quest requires players to follow a map that leads to a puzzle that must be completed in order to win a holographic digital globe furniture item. Phone Quest requires players to use a virtual phone to receive clues about how to find the last challenge, which is a logic puzzle. If completed, the user wins a virtual SYNC-branded hooded sweatshirt with a glowing logo.

Following completion of the three quests, players will be instructed to return to the Ford Showroom where they will receive the grand prize of a virtual digital picture frame with the SYNC brand on it.

?The purpose of Ford participating in PlayStation Home is not only to educate users, but to help entertain as well,? said McClary.

Ford is the first company to develop a space for PlayStation Home users.