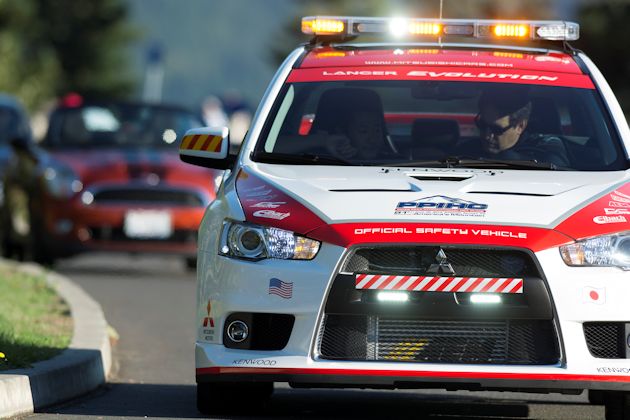 Portland, Ore. ? Every year an automotive writer?s organization Barb and I belong to has a two-day drive called Run to the Sun (RttS). It gives us a chance to sample some of the manufacturers? latest offerings. This year Barbara was away at a Jeep-Ram-Dodge program in Southern California, so I was on my own with 25 other automotive journalists for the two-day drive from Portland through the Cascade Mountains to central Oregon and back.

Here?s a brief comment about each of the cars I drove during the 2013 NWAPA Run to the Sun. The list is in alphabetical order. I?ve also included a few pertinent details, the price of each including the destination charge and the EPA fuel economy estimates for city/highway and combined.

Most of the photos were taken by John Vincent for NWAPA.

2013 Mercedes-Benz SL63 AMG — In the world of fantasy there are cars like the Mercedes-Benz SL63 AMG. Breathtaking from every angle, filled with futuristic Mercedes technologies
and powered by one of the most powerful engines available, the SL63 is a dream. The beautiful roadster is topped with a retractable hardtop which gives it twin personalities ? coupe and roadster. Even when the top it up, it has a Sky Control glass top that allows the driver the ability to change the tint for light to dark electronically. Under the long nose sits a 5.5-liter biturbo V-8 pumping 530 horses (557-hp with the performance package option) to the rear wheels through a seven-speed Speedshift transmission. Zero to 60 mph comes in 3.7 seconds and the top speed is limited to 186 mpg with the performance pack option which this car had. If you have to ask, as I did, the price is $171,225. Fuel economy is 16/25/19 mpg. 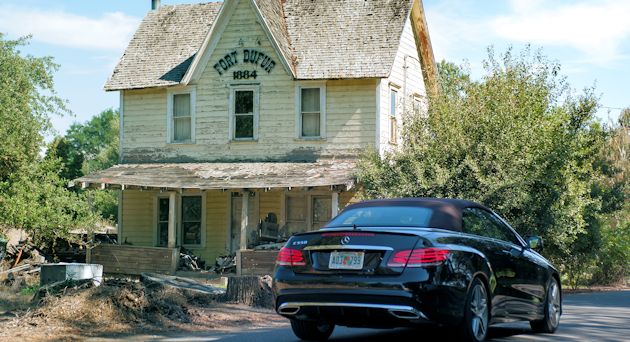 2014 Mercedes-Benz E550 Cabriolet ? If the SL63 is out of your price range, here?s a half price alternative — the four-seat E550 Cabriolet. This variant of the broad E-Class lineup seats four adults comfortably and has a well-insulated cloth top. With the top down you hear the outstanding V-8 engine exhaust note which is like something from the Metropolitan Opera ? deep and powerful. The delightful sounds and responsive performance comes from a 402-hp 4.6-liter Biturbo V-8 engine feeding a seven-speed automatic transmission. The E550 sees 60 mph in just 4.9 seconds. Features like Air Scarf, which blows warm air toward the back of your neck, extend the top down driving season. It also has an AIRCAP, which rises from the top of the windshield frame like a wing, directing wind flow over the open cockpit. You can buy the Cabriolet V-8 from about $68,000, but it?s much nicer with a dozen options which take the price up to $82,335. Fuel economy is 17/26/20 mpg. 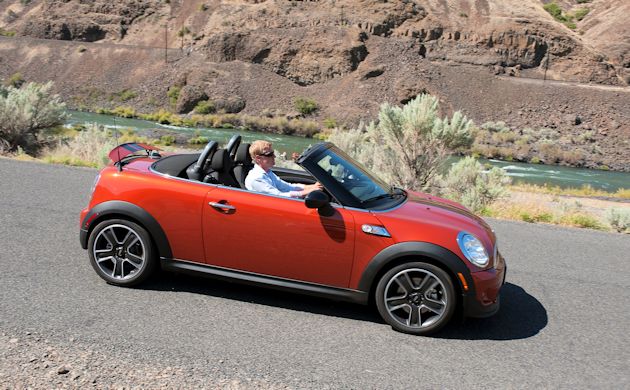 2013 Mini Cooper S Roadster ? Did you know Mini Cooper makes a roadster in addition to the convertible. New in 2012, the Roadster is the first Mini two-seater. I think the styling is a bit awkward-looking, with the top up, but it?s mostly a fun car and a blast to drive. The RttS car was the Cooper S, which means there?s a turbocharged, 181-hp 1.6-liter four-cylinder engine under the hood. This car had the Steptronic six-speed automatic transmission option and a few other option packages running the price to $35,345. The Mini goes from 0 to 60 mph in 6.7 seconds. Fuel economy is 26/34/29 mpg.

2014 Mitsubishi EVO Safety Car ? You can?t buy this car, it?s the one Mitsubishi outfitted as one of the official Pikes Peak Safety Cars that were used as support vehicles for this year?s race. With the Pikes Peak race starting line at over 9,000 feet and the finish over 14,000 feet, cars without turbochargers or superchargers are anemic, gasping for air. Not the Lancer Evolution, though. This car is powered by a 291-hp, turbocharged and intercooled four-cylinder engine with a Twin-Clutch Sportronic Shift Transmission and paddle shifters. It has Mitsubishi?s state of the art Super All-Wheel Control and Brembo breaks to stop it quickly. The Safety Car was also outfitted with a bunch of flashing lights just like a police car. Like all Evolution?s I have driven, it?s fast, remarkably surefooted and as a result really fun to drive. 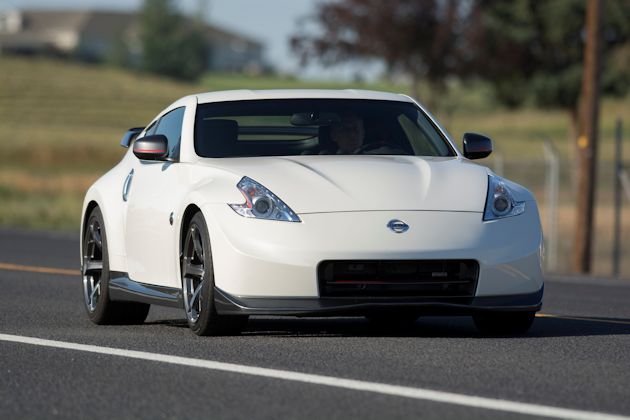 2014 Nissan 370Z Nismo ? The 370Z Nismo is the lead car of Nissan?s performance brand. It?s been several years since I had a chance to drive a Nismo, and I?d forgotten how good the 370Z is, or perhaps it?s just getting better and better. With handling capabilities more like a race car than street car the Nismo is an impressive drive, but not the most comfortable car in the field. This year the naturally aspirated 350-hp 3.7-liter V-6 produces a 4.6 second 0 to 60 mph time. I love the six-speed manual transmission with its SynchroRev Match? function. Rather than having to double clutch or heal-and-toe to shift down before a corner, all you do is shift to the next lower gear and the transmission does the work for you ,matching transmission and engine revs. It?s the smoothest downshift you?ve ever made ? every time. The 2014 Nissan 370Z Nismo is priced at $46,370 with a couple of options. Fuel economy is 18/26/21 mpg. 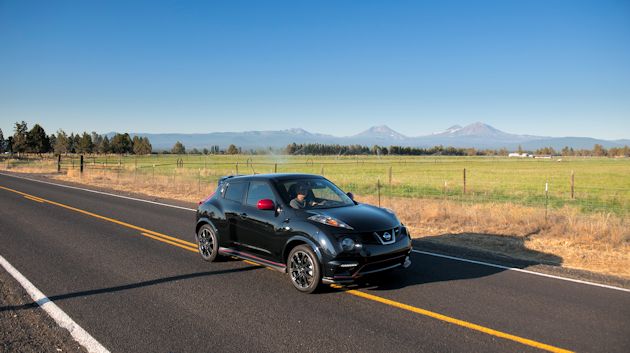 2014 Nissan Juke AWD Nismo ? Nissan calls the Juke a sports crossover, and the new Nismo performance edition is the leader of the pack. The Juke gets noticed with unique styling, and the Nismo version adds a new dimension. The 1.6-liter turbocharged direct injection four-cylinder engine is bumped up to 197-hp, outfitted with a Nismo tuned suspension and aerodynamics. The Juke Nismo is quick, well-balance and a blast to drive, rivaling cars like the Mini Cooper S in the fun department. The Juke hits 60 mph in 6.9 seconds. It?s quite a value, too priced at $27,710 for an AWD performance car with navigation and a Rockford Fosgate audio system. The only down side is the CVT? transmission, but if you have to have a CVT, this is about as good as they get. Fuel economy is 25/30/27 mpg. 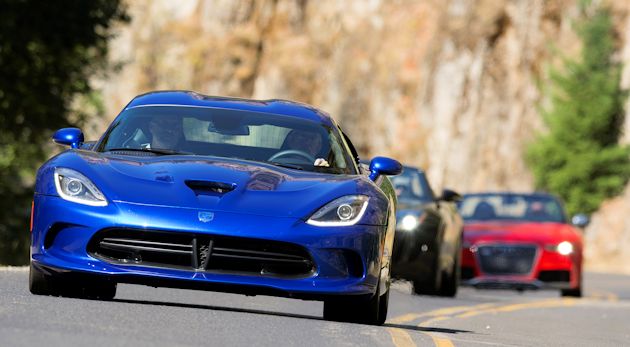 2013 SRT Viper Coupe ? My taste in fast cars runs more to sport sedans and coupes, so I was never overly excited about the Viper. Earlier models were scary fast and had racecar handling, and they were hard work to drive. (Note the Dodge name is no longer; the performance vehicles are now under the SRT brand.) The all new SRT Viper is one of those cases about going to charm school to get some manners. Yes the new Viper is a bit more civilized, more finished looking on the interior and a bit easier to drive. Even though it?s much more civilized, Viper purists will not be disappointed, it?s still a beast and requires the driver?s undivided attention. After all when you have a 640-hp, 8.4 liter V-10 engine under that long, long hood of a 3,400 pound car it?s going to be fast. A 0 to 60 mph run takes four blinks of an eye or 3.5 seconds, and if you had the guts and skill on a track, they say it will go 206 mph. With a few options and a $2,600 Gas Guzzler Tax, the Viper has a bottom line price of $128,090 or about $200 per horsepower. Fuel economy is 12/19/15 mpg. 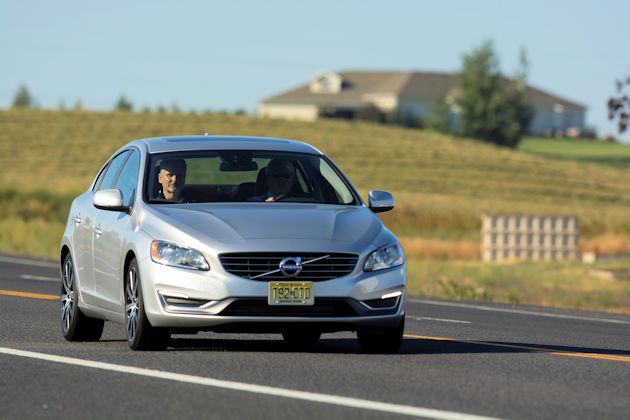 2014 Volvo S60 Premier Plus ? The Volvo S60 T5 sedan hasn?t changed a lot since the second generation debuted in 2010, however it?s still amazingly current, comfortable and good looking. The company has been through some ups and downs since it sold to a Chinese company a few years ago, but we expect to see some major changes coming in the next year or two. The S60 T5 I drove at the RttS program had a 250-hp 2.5-liter five-cylinder engine with six-speed automatic driving the front wheels ? it?s also available in all-wheel drive. The S60 goes from 0 to 60 mph in a very respectable 6.4 seconds and handles beautifully. Of course Volvo trademark safety features still make it a leader in that category. The 2014 Volvo S60 T5 Premier Plus is priced at $38,715. Fuel economy is 21/30/24 mpg. 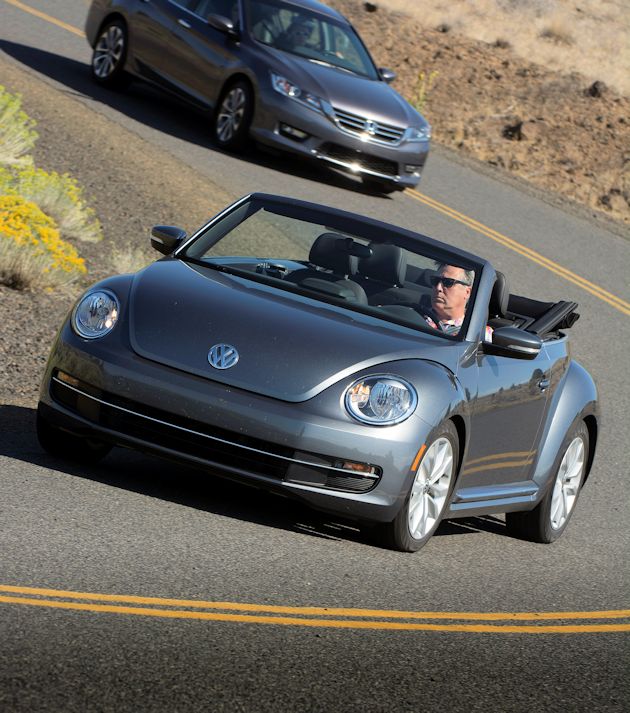 2014 Volkswagen Jetta GLI Autobahn ? The Jetta is Volkswagen most versatile model with 14 variations of the sedan alone. The GLI Autobahn I drove at the RttS was one of the top models and therefore equipped with high level of features including navigation. The car is civilized, comfortable and a pleasure to drive. The 210-hp 2.0-liter turbocharged four-cylinder is the latest edition of one of my favorite engines, and it?s one of the best-selling VW engines ever. It makes the 0 to 60 mph run in 6.6 seconds. The 2014 Volkswagen Jetta GLI Autobahn is priced at $30,415 which puts it near the top of the Jetta pricing schedule, but it?s a very impressive car. Fuel economy is 24/32/27 mpg.

It?s a lot of work to drive 25 cars over a two day Run to the Sun, but it?s also a great deal of fun to try out so many great cars back-to-back like this?but someone has to do it.