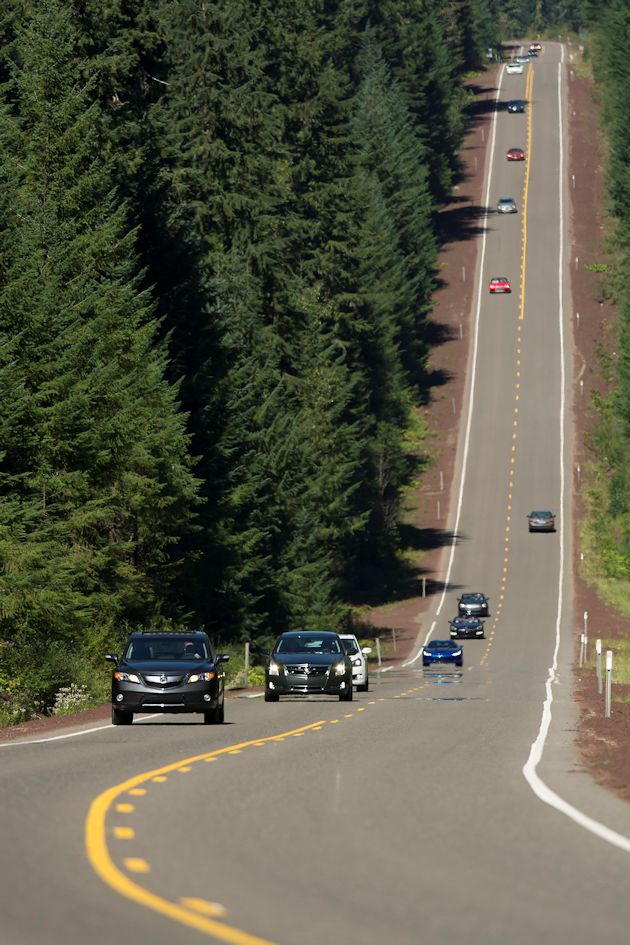 By Bill SchafferPortland, Ore. ? Every year an automotive writer?s organization Barb and I belong to has a two-day drive called Run to the Sun (RttS) giving us a chance to sample some of the manufacturers? latest offerings. This year Barbara was away at a Jeep-Ram-Dodge program in Southern California, so I was on my own with 25 other automotive journalists for the two-day drive from Portland through the Cascade Mountains to central Oregon and back.

The Northwest Automotive Press Association (NWAPA) organizers did a great job putting together a first class fleet of 25 cars from 22 manufacturers for this year?s Run to the Sun (RttS).

A plus was most of the cars came equipped with a real navigator who watched the route book and told you where to turn. The bonus was that navigators were manufacturer representatives. This gave me a chance to visit with old friends, who could tell me about the cars pointing out features I might not find in a short drive like this. It also gave me a chance to ask questions about the car and the company.

Here?s a brief comment about each of the cars I drove during the 2013 NWAPA Run to the Sun. The list is in alphabetical order. I?ve also included a few pertinent details, the price of each including the destination charge and the EPA fuel economy estimates for city/highway and combined.

Most of the photos were taken by John Vincent for NWAPA. 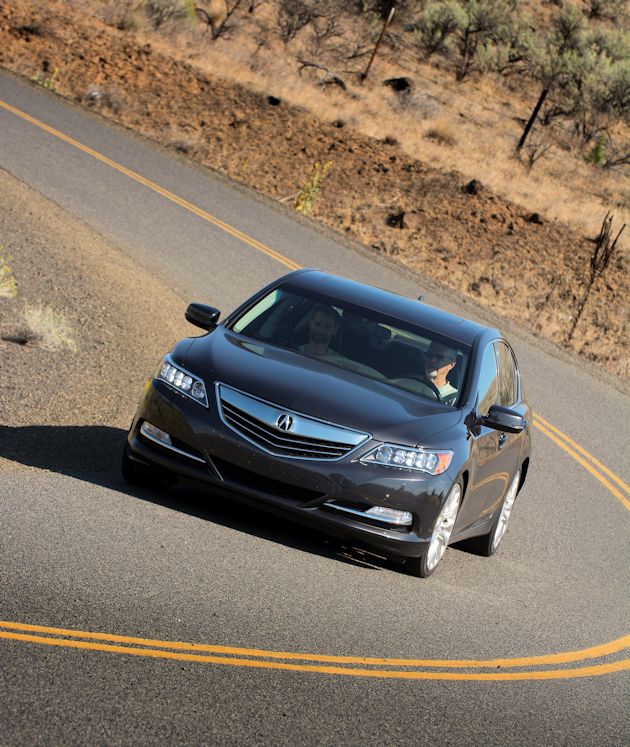 2014 Acura RLX Advance ? The RLX is Acura?s latest interpretation of their flagship sedan. It?s loaded with significant technology like a precision all-wheel steering system that improves handling and a plethora of other new technologies and features. The engine is a 310 horsepower, 3.5-liter V-6 with a six-speed automatic transmission and front wheel drive. The RLX Advance, which includes the Tech Package, is the top model with no other available options and is priced at $61,345. EPA fuel economy is 20/31/24 mpg. 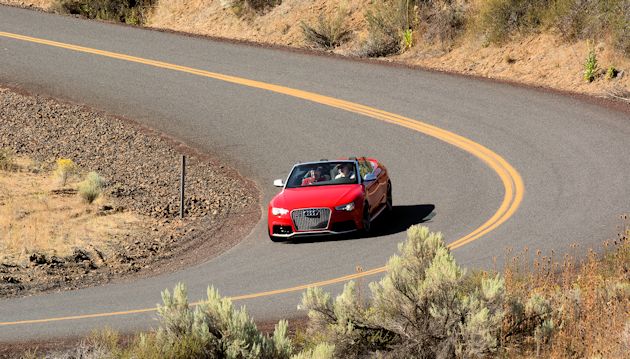 2014 Audi RS5 Cabriolet — In the world of Audi there are the A?s, the S?s and the RS?s. Each step up from the A means more power, thus faster. The Audi RS5 was just released in the U.S. and it?s the ultimate of the model 5 designation, which includes a sexy coupe and this very cool convertible. The RS5 has a 450-hp, 4.2-liter naturally aspirated V-8 engine, with a seven-speed S tronic? transmission and quattro all-wheel drive. The car is capable of a 4.9 second 0 to 60 mph run and a top track speed of 174 mph. Fuel economy is 16/22/18. 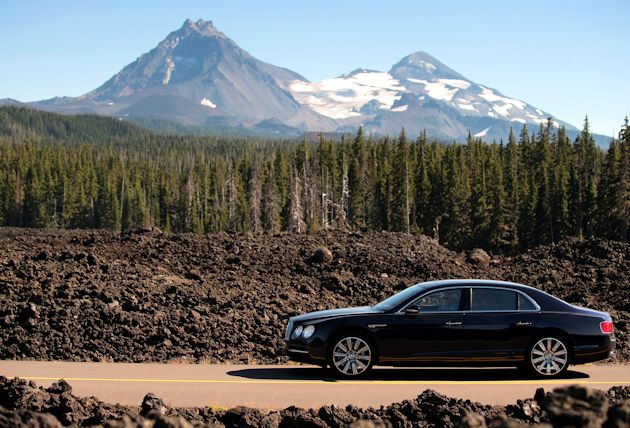 2013 Bentley Flying Spur ? I wasn?t sure if I was supposed to ride in the front or back seat of this beauty. Because I drove it day one, and our good friend, Cory Profit the Bentley rep, was still in route to Central Oregon from the Frankfurt Auto Show, I was forced to drive ? darn. Everything is special about the Bentley Flying Spur from its 616-hp, 12-cylinder twin turbo engine and eight speed transmission with all-wheel drive to its 0 to 60 mph time of 4.3 seconds and top speed of 200 mph. It?s the ultimate big, fast, elegant sedan, and quite a value, actually, at $214,265. Fuel economy is 12/20/15. 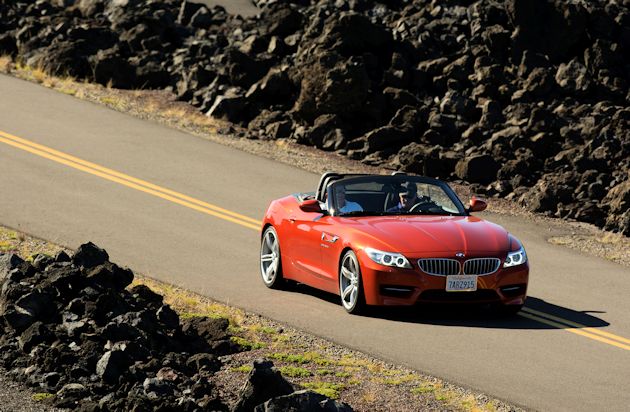 2014 BMW Z4 ? The BMW Z4 sDrive35is, is a roadster that often gets overshadowed by the rest of brands? fleet of Ultimate Driving Machines. Built since 2002 and now in its second generation the Z4 is fast, agile and fun to drive. The 335-hp, twin turbocharged, inline-six-cylinder sounds great with the top down, and it?s very fast producing a 0 to 60 mpg time of?4.8 seconds and a limited top speed of 155 mph. With optional wheels and special orange color, the 2014 BMW Z4 SDrive35is is priced at $68,425. Fuel economy is 17/24/20. 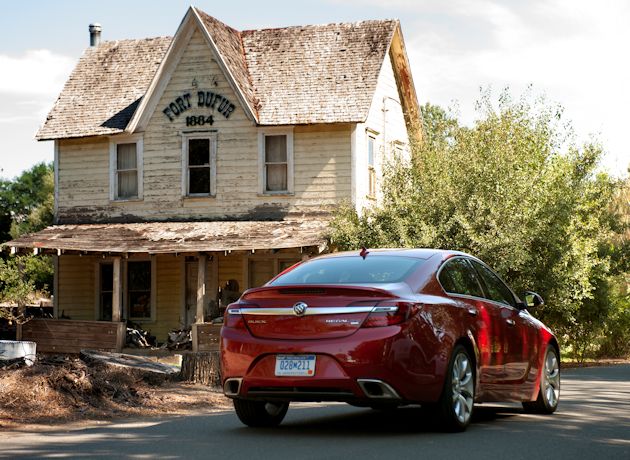 2014 Buick Regal GS AWD — The Buick Regal GS AWD was something of a sleeper, and very fun to drive. The 2.0-liter turbocharged four-cylinder produces 259 horsepower, driving all four wheels through a standard six-speed automatic transmission (a six-speed manual transmission is a no-cost option). It even has Brembo brakes on the front wheels. The Regal felt faster to me than the 6.8 second 0 to 60 mph time listed by some of the buff magazines. With three option packages and premium paint the Regal I drove was priced at $45,075. Fuel economy is 18/29/22 mpg. 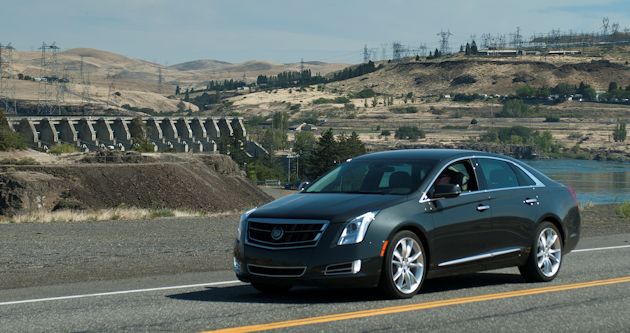 2014 Cadillac XTS VSport AWD Premium ? The car is elegant and sophisticated beyond any previous Cadillac, and it?s pushing at the big name European models. The VSport model is powered by a twin-turbocharged 3.6-liter V-6 engine producing 410-hp. The VSport has and needs all-wheel drive to provide traction with all this power. (The base version XTS is front wheel drive.) Zero to 60 mph takes 5.2 seconds. The Premium trim level XTS with driver assistance package has price of $65,415. Fuel economy is listed at 16/24/19 mpg.

2014 Chevrolet Stingray ? I?ve never been a Corvette fan, but have always respected the marque. After driving the 2014 model at the introduction earlier this year, I think my respect has turned to ?fan.? Not only is the performance world class, the two-seat sports car has a new elegance, never seen before — the beast has graduated from finishing school at the top of its class. It is powered by a 455-hp, 6.2-liter V-8 with an impressive six-speed automatic transmission. For people who like to shift, it also has a seven-speed manual transmission option. With the LT package and couple of other cosmetic upgrades the car used for the RttS drive had a sticker price of $72,515. The 0 to 60 mph time is 3.8 seconds and the unofficial track top speed is 190 mph. Fuel economy is an amazing 17/29/21 mpg. 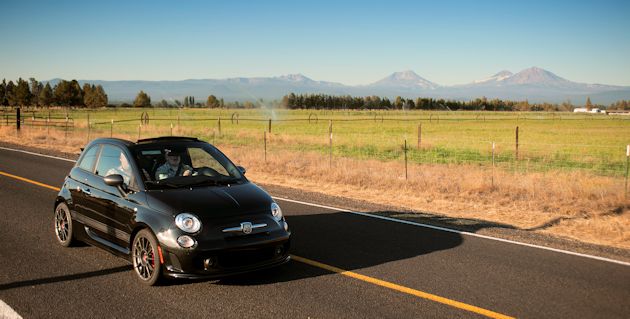 2013 Fiat 500 Abarth Cabriolet ? The Fiat 500 is one of those cars that make me smile, and the Abarth performance model causes almost a full-time grin. The Abarth model adds a different dimension ? acceleration and acoustic enhancement. Abarth is a noted European exhaust manufacturer and as you would expect the Abarth Fiat, sounds great and loud. The Turbocharged 160-hp, 1.4-liter four-cylinder engine, hooks to a five-speed manual transmission which together drive the front wheels. The Cabriolet top is not a true convertible, but rather a cloth insert that can be powered back to any position even while at highway speeds. The 0 to 60 time for this little beast is about 3 seconds quicker than the base model 500 or 6.9 seconds. The price for the top model with four options hits $29,600. A little expensive sounding, but it?s a unique car. Fuel economy is 28/34/28 mpg. 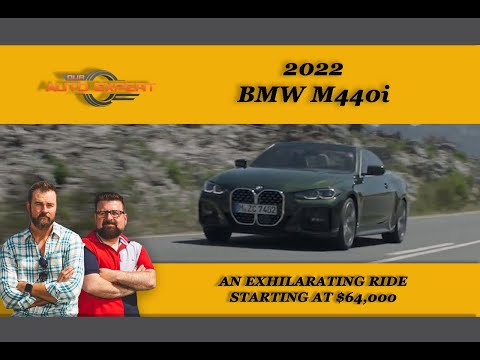