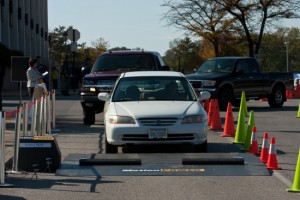 The City of Roanoke, Virginia has installed the world?s first rumble strips, which in addition to slowing traffic, generate electricity.? Developed by New Energy Technologies, Inc. the MotionPower?-Express system is capable of generating sustainable electricity.? The installation at the Roanoke Civic Center debut is the first of several test and demonstration events the Company plans to conduct in partnership with the City of Roanoke.

?The City of Roanoke takes seriously its responsibility to be good stewards of the environment and is always looking for unique ways to meet our mission of increased sustainability,? said Ken Cronin, Director of General Services/Sustainability for the City of Roanoke.? ?We are proud to be the first city in the nation to test this novel technology with the potential to make the way we produce energy more clean and green.? 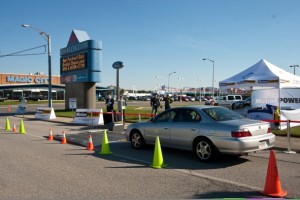 The nearly 6000 visitors and over 580 vehicles passing over the strips during the initial demonstration event ?produced enough sustainable electricity to power lights for the average American home for an entire day.? In commercial applications, the same electricity could power a 150 square foot sports-venue electronic billboard or marquee for an entire day.

As drivers slowed down, or came to a stop, as they passed over the strip, their vehicle tires depressed small rumble strip-like treadles, allowing for the capture of kinetic energy.? This captured energy was converted to electricity, which powered a series of brightly illuminated lights displayed to drivers.

?We applaud and thank the City of Roanoke for their vision and cooperation in making this a successful demonstration,? said John Conklin, President and CEO of New Energy Technologies, Inc.? ?I especially want to thank the hundreds drivers and thousands of participants who helped us green the City, one car at a time.?

?MotionPower can offset the city?s cost of operating traffic control devices, such as traffic signals and street lights,? said Mark Jamison, City of Roanoke Manager of Transportation. ?This innovative partnership with New Energy Technologies has the potential to provide a more sustainable environment, while simultaneously conserving strained budgets of cities across the nation.?

More than 250 million vehicles are registered in America and an estimated 6 billion miles are driven on our nation?s roads every day. According to the U.S. Energy Information Administration nearly 70 percent of America?s electricity is generated by natural gas and coal. The environmental impact of greenhouse gas emissions and the rising cost of those non-renewable fuels, along with the potential doubling of global electricity consumption in the coming years, require the urgent need for creative, sustainable methods of generating electricity. The prospect of sustainably converting vehicle motion and deceleration (vehicle energy) into electricity represents significant positive environmental impact and alternative energy opportunities.