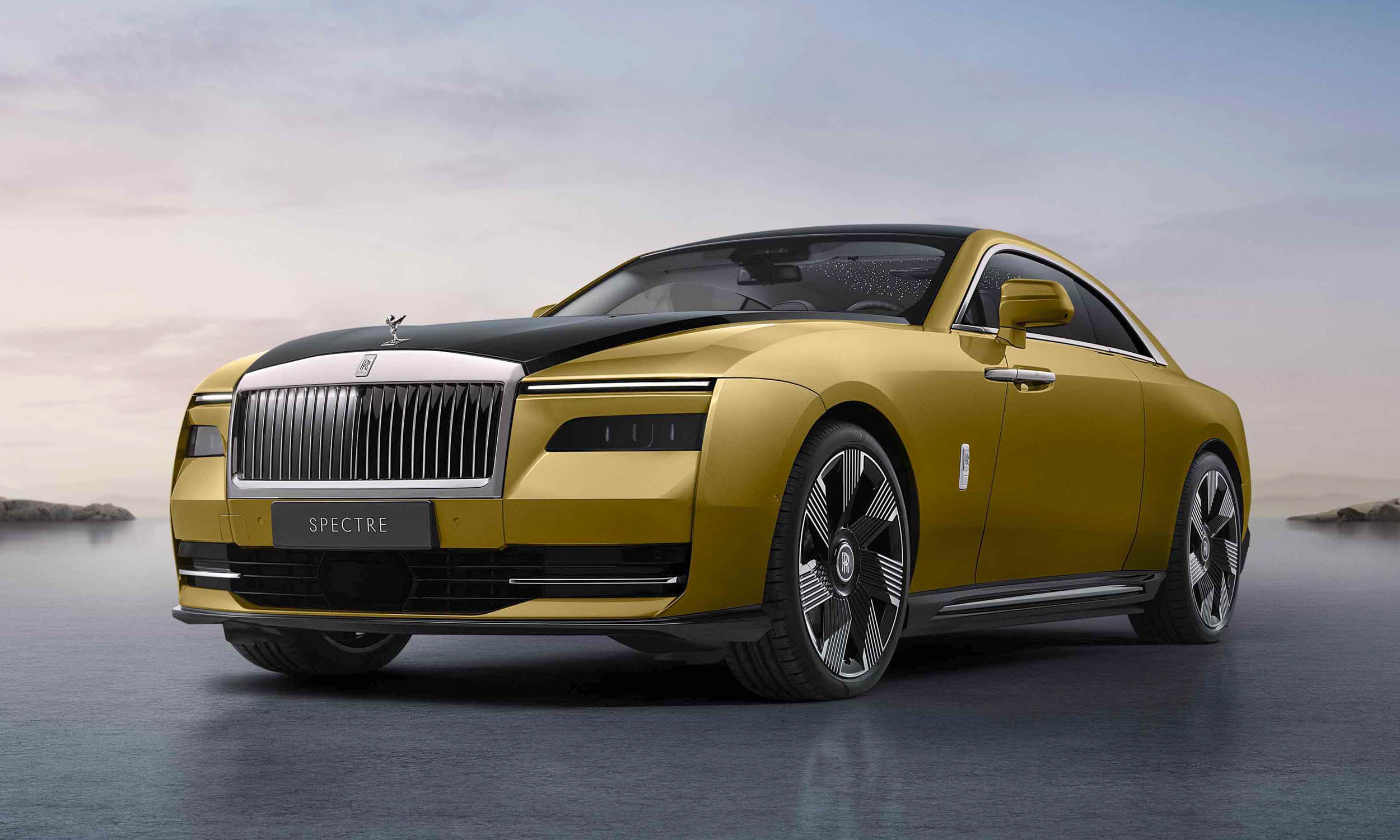 First-Ever Rolls-Royce EV
If there were a singular automotive brand that epitomized luxury, it would have to be Rolls-Royce Motor Cars. Since its inception more than 100 years ago, Rolls-Royce has established a well-deserved reputation for building extraordinary automobiles that are the embodiment of luxury. With advanced engineering, powerful engines and lavish interiors, the modern-day Rolls-Royce has no roadgoing peer. Today the luxury brand took its first steps toward an electrified future with the debut of its newest and most technologically advanced vehicle ever from the famed British marque: the Rolls-Royce Spectre, the inaugural all-electric automobile for the brand. 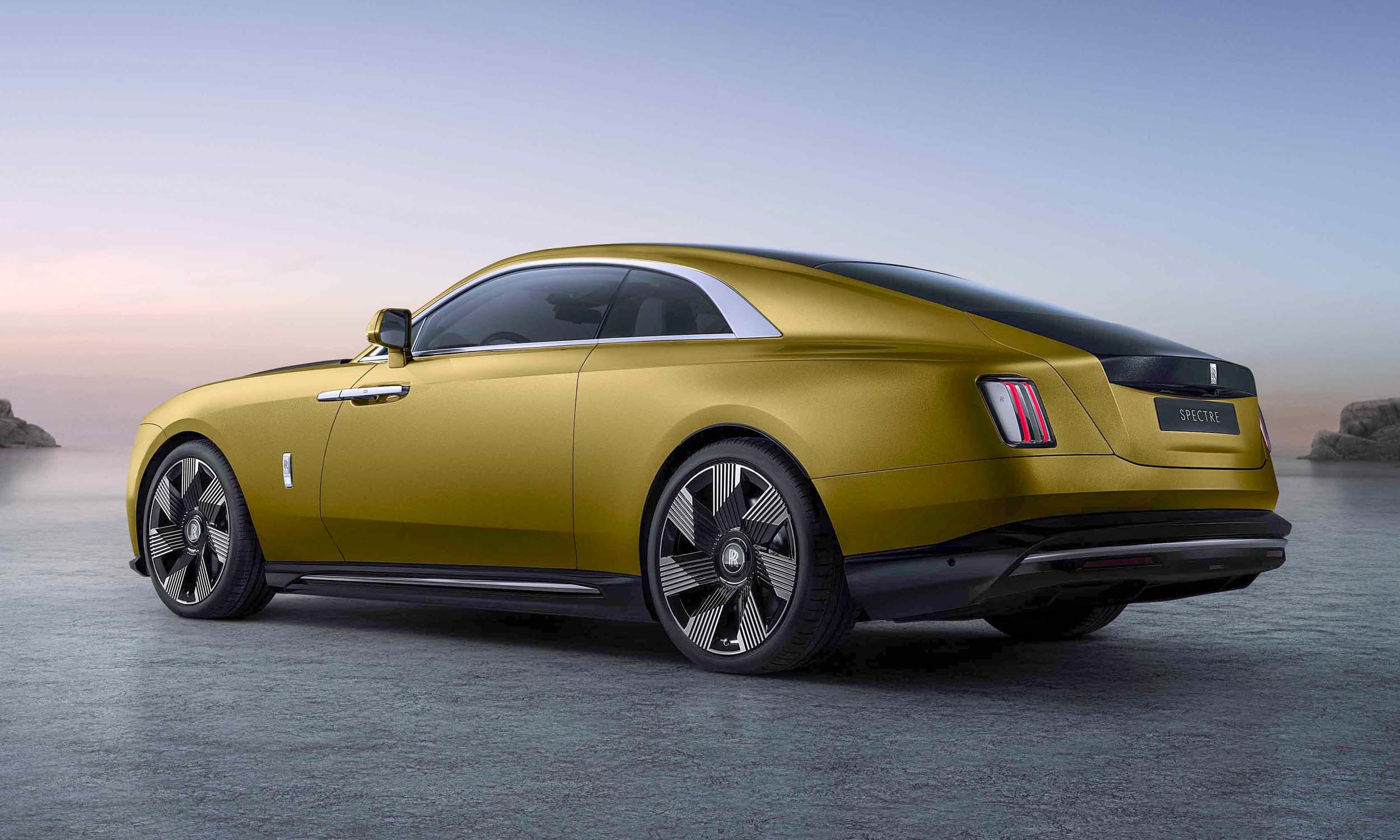 Highly Anticipated Rolls
To say the Rolls-Royce Spectre EV is important to the brand is a pure understatement, and company execs are enthusiastic about this new vehicle. “It is no exaggeration to state that Spectre is the most anticipated Rolls-Royce ever. Free from the restrictions connected to the internal combustion engine, our battery-electric vehicle will offer the purest expression of the Rolls-Royce experience in the marque’s 118-year history, “ said Chief Executive Officer of Rolls-Royce Motor Cars Torsten Muller-Otvos. 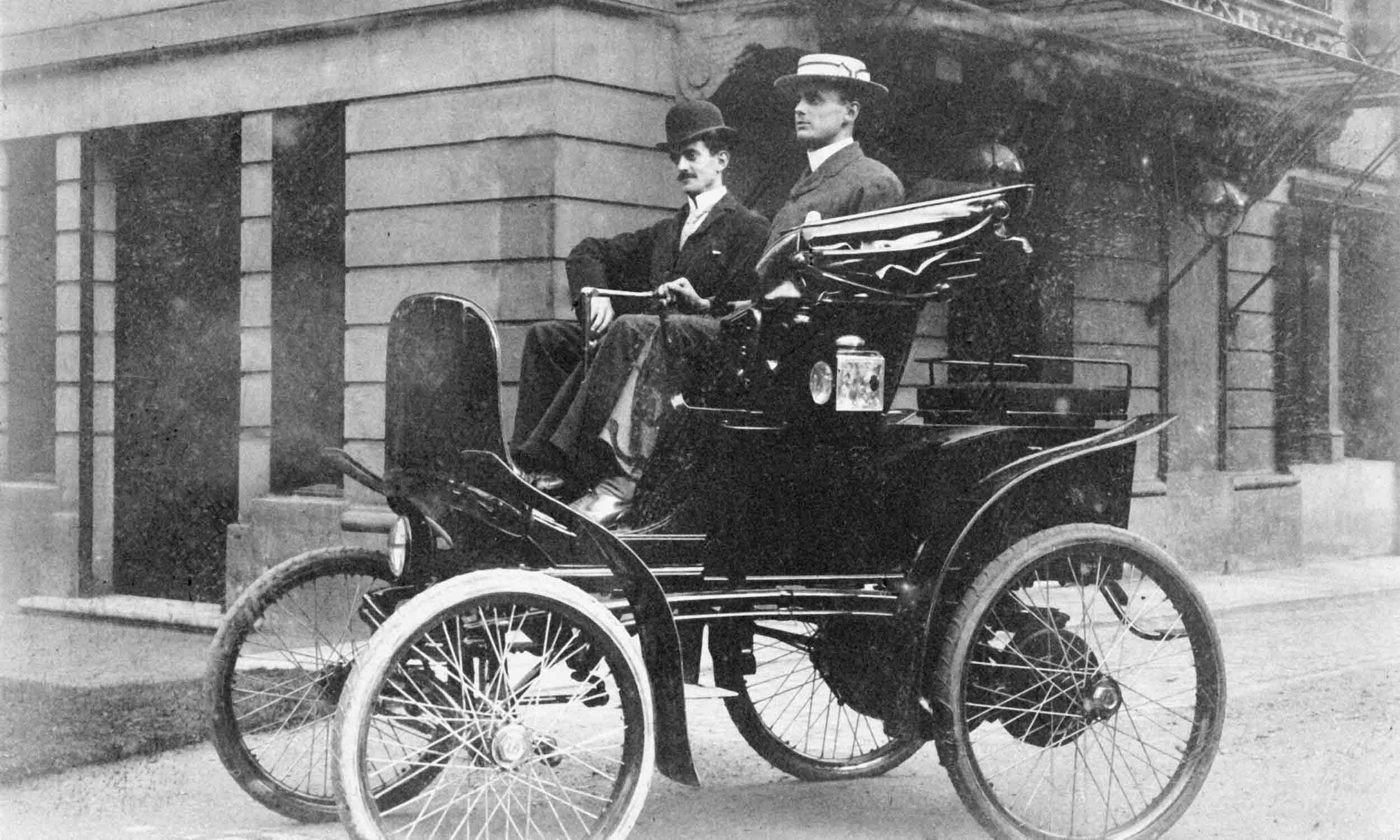 120-Year Old Prediction
The journey toward vehicle electrification has accelerated dramatically in the last few years, but the idea is nothing new — especially for Rolls-Royce. More than 120 years ago, company co-founder Charles Stewart Rolls experienced his first electric vehicle – a Columbia Electric Carriage. After his drive, Rolls noted that, “The electric car is perfectly noiseless and clean. There is no smell or vibration. They should become very useful when fixed charging stations can be arranged.” And this this visionary automaker’s prediction can finally come to fruition in the new Spectre. 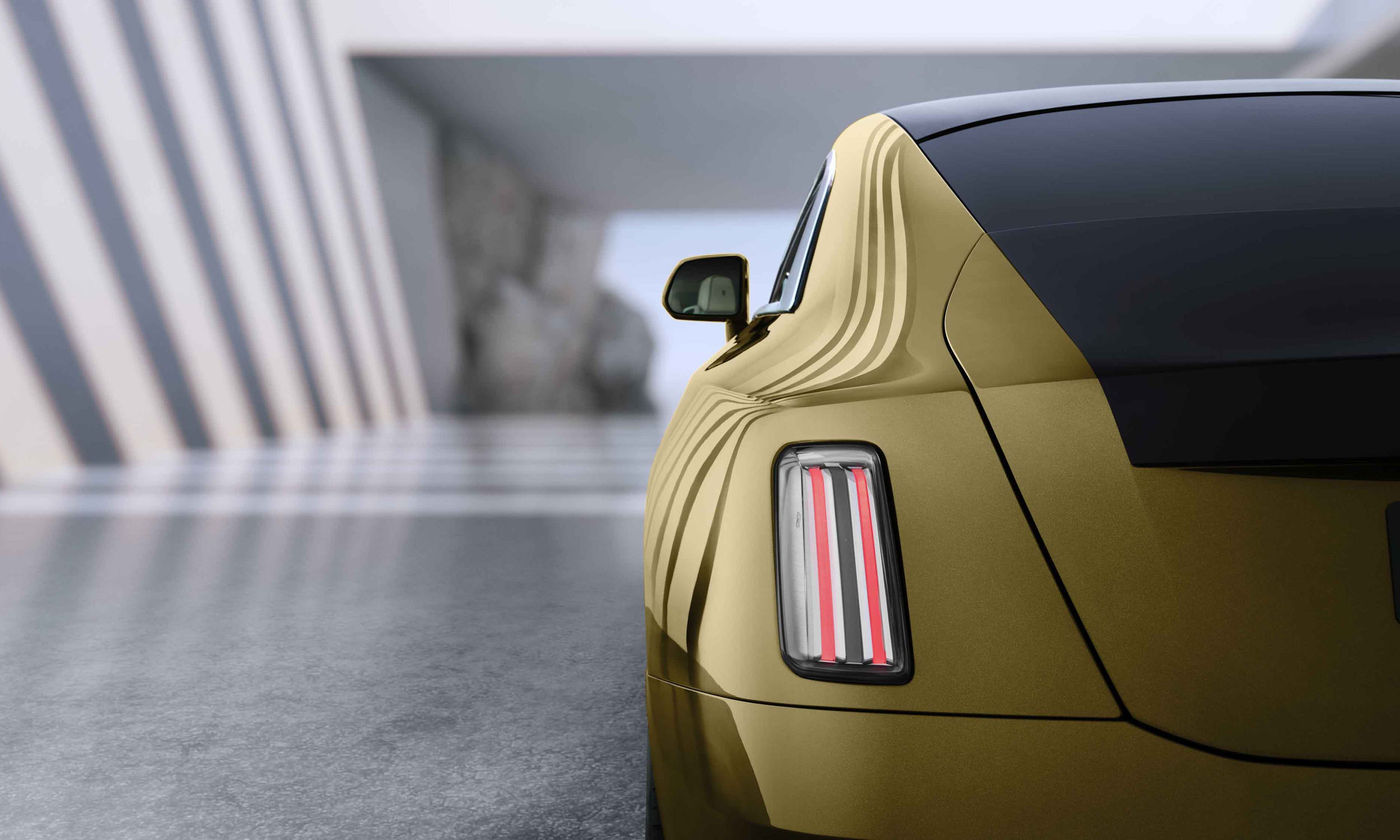 Brand Going Electric
Last year Rolls-Royce announced that by 2030 every Rolls-Royce vehicle would be full electric. Ultimately an all-electric powertrain makes sense for a company that prides itself on building vehicles that run whisper quiet and smooth, possessing plenty of torque for strong performance — qualities often associated with electric powertrains. 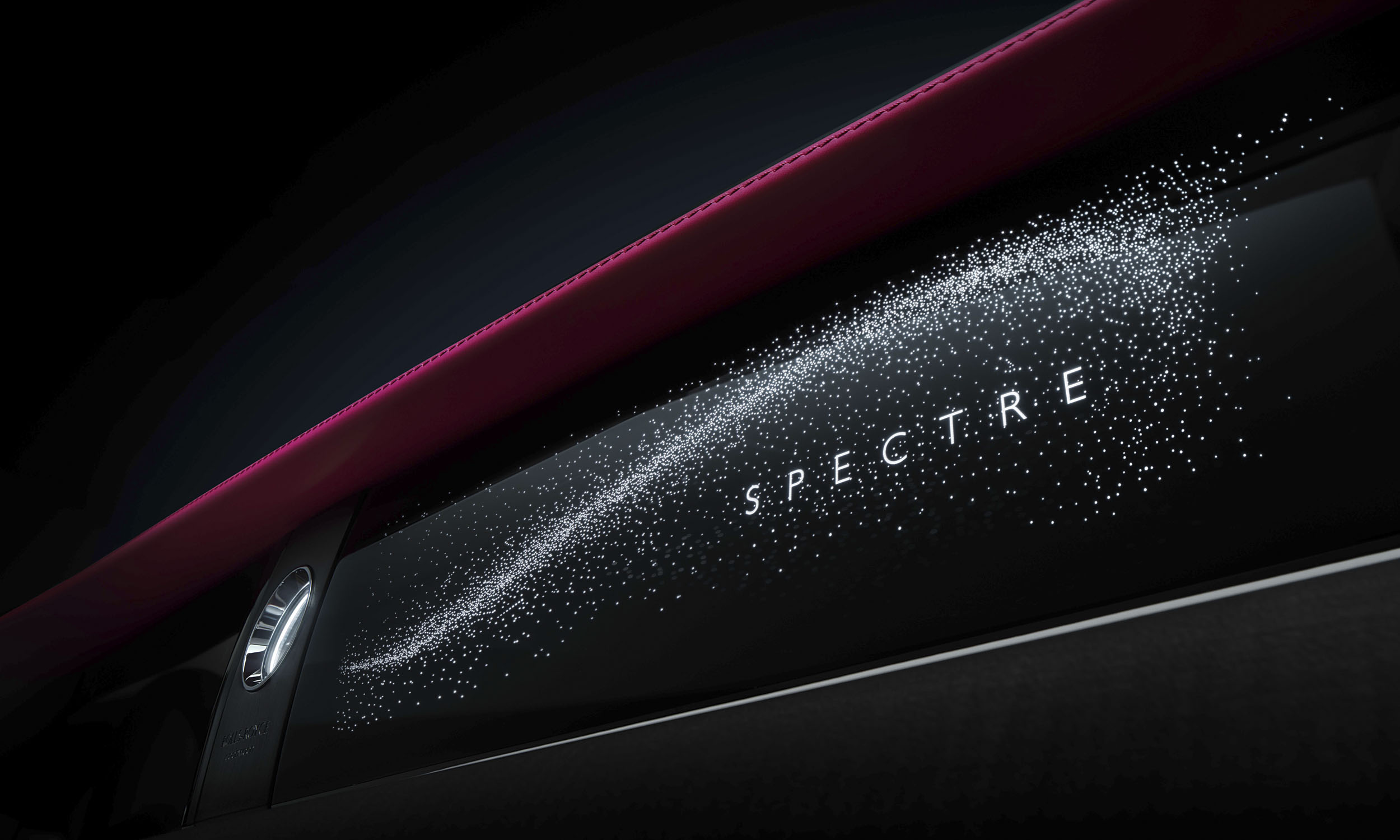 Proper Name
Like the Phantom, Ghost and Wraith, the name Spectre suggests the supernatural. “Spectre is a name given to otherworldly beings synonymous with great power and apparition . . . It dominates the space it occupies. Then, as quickly as it appears, it dissipates, leaving a wake of exhilaration, energy, and intrigue,” says Muller-Otvos. “This name perfectly matches the extraordinary Rolls-Royce that we are announcing today — a motor car that makes its presence felt before disappearing into a world inaccessible to all but the very few,” noted the CEO. 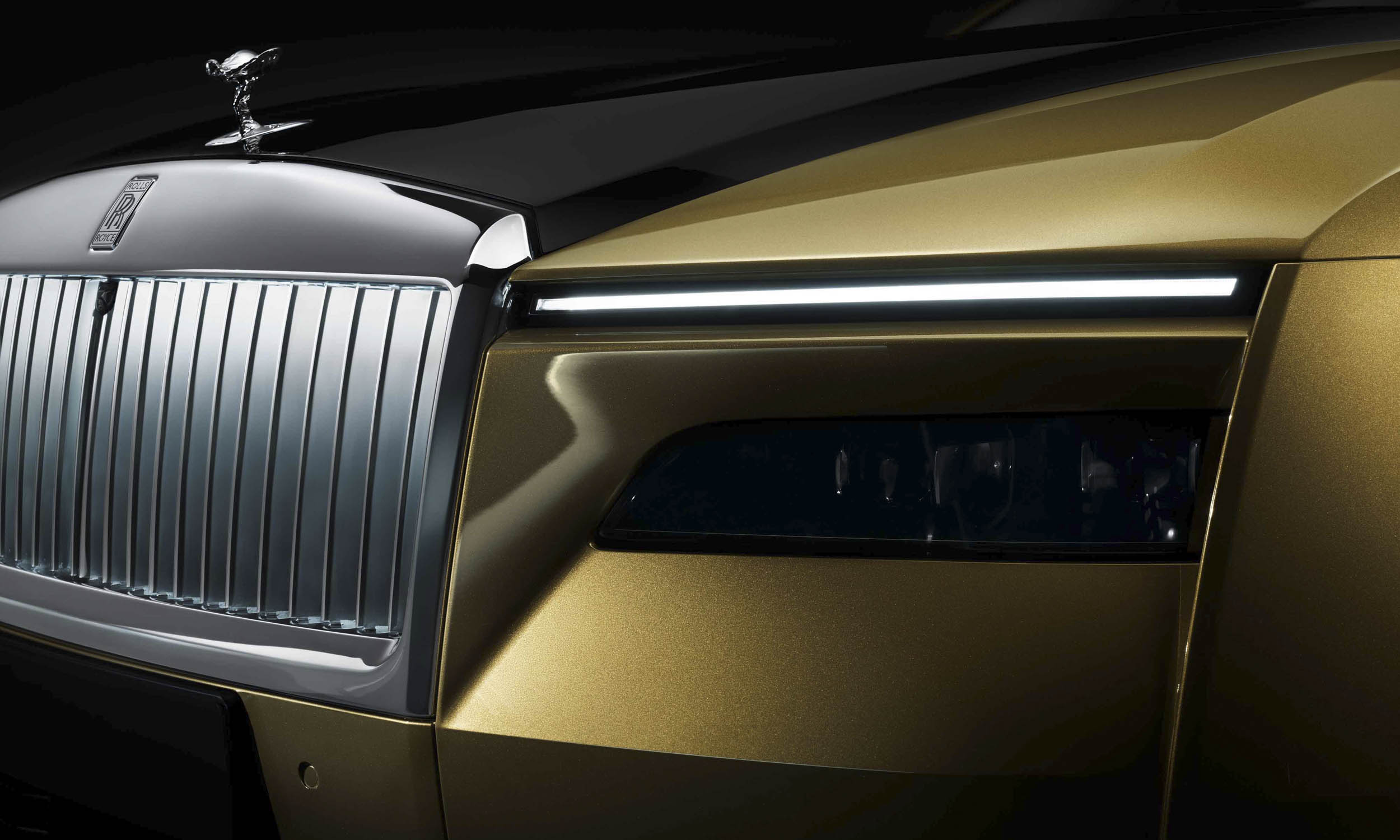 Super Coupe
In terms of provenance, Rolls-Royce considers the Spectre as the spiritual successor (pun intended) to the short-lived Phantom Coupe. However, from a design standpoint, the vehicle’s lines look much more like the outgoing Wraith, albeit in a much sleeker form. Referred to as an Ultra-Luxury Electric Super Coupe, the Spectre features the widest grille ever on a Rolls-Royce. The grille’s vanes are smoother with a flush fit to better direct airflow around the big vehicle. Each vane incorporates 22 LEDs to provide the grille with a soft glow at night. Even the famed Spirit of Ecstasy hood ornament has been redesigned for improved aerodynamics, and the result is an overall drag coefficient of a mere 0.25, which makes Spectre the most aerodynamic Rolls-Royce ever produced. 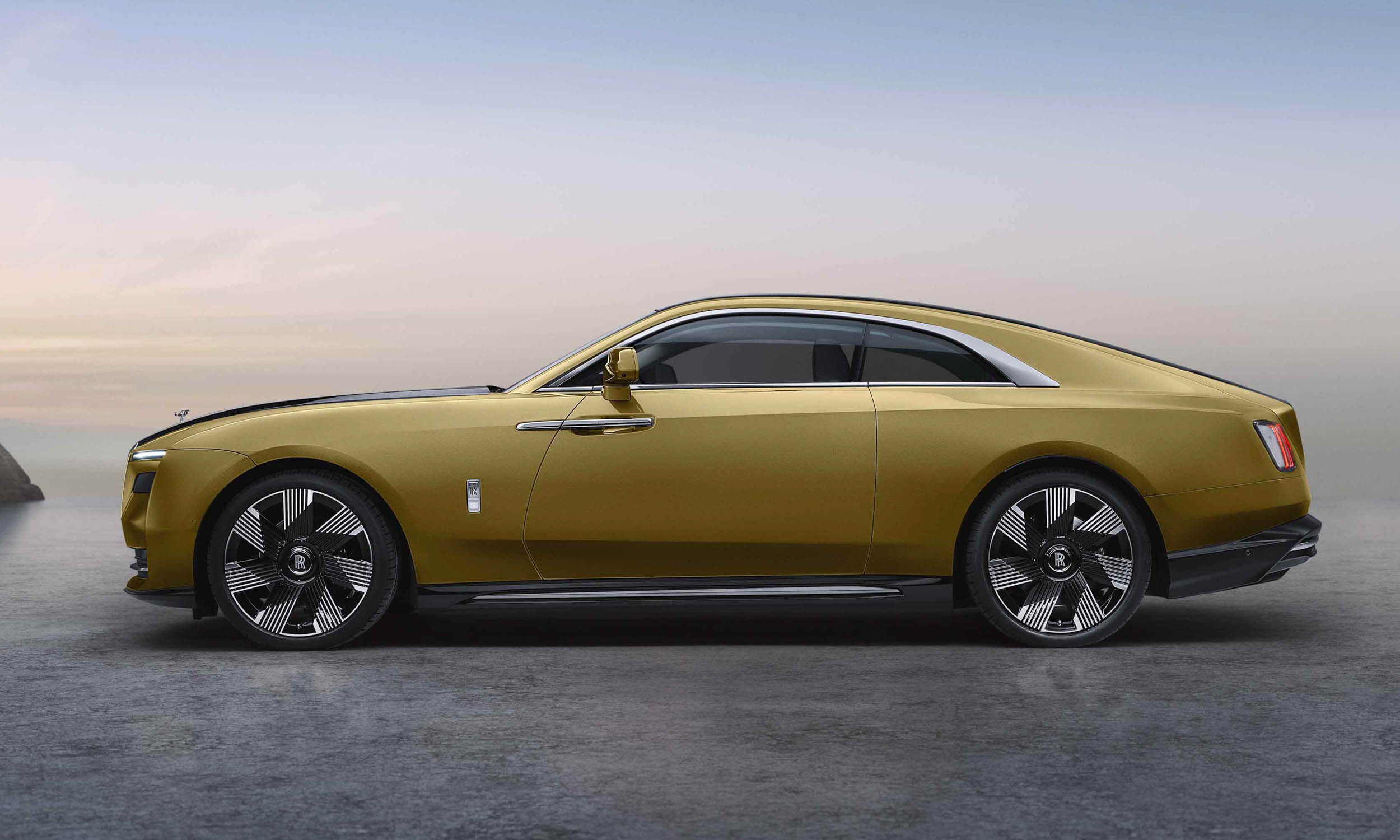 Grand Presence
The Rolls-Royce Spectre EV is designed to operate on a grand scale with a powerful presence — as expected of any Rolls-Royce. The EV rides on 23-inch wheels — the largest the company has used on a vehicle since 1926. The steeply raked windshield and fastback design certainly draw attention as well as improve airflow efficiency. The pillarless, rear-hinged coach doors are more than four feet long — the longest doors ever on a Rolls. 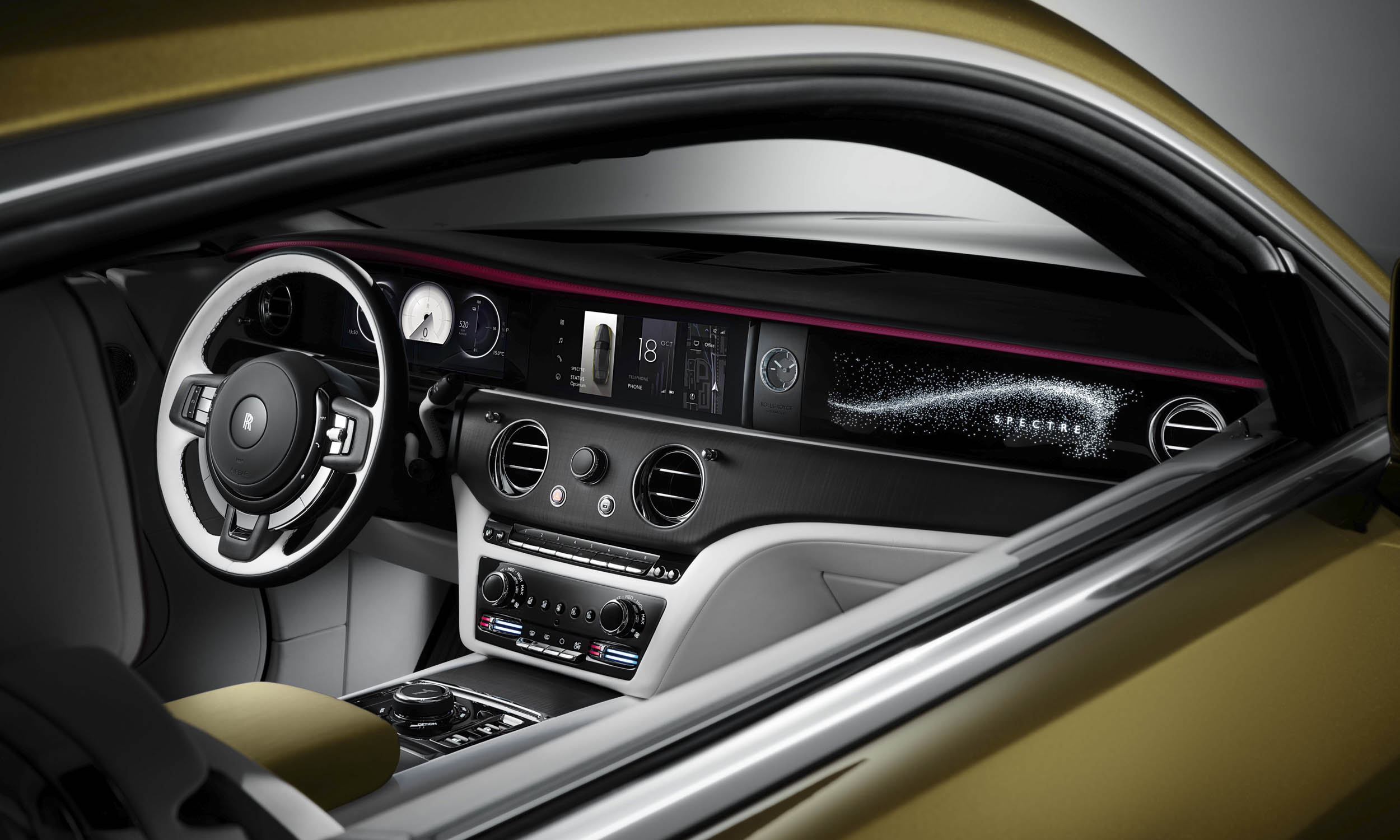 Elegant Interior
Inside, the cabin of the Spectre is an assortment of luxury and high-tech features — as one would expect from the most advanced Rolls-Royce ever. Front seats have an all-new design inspired by British tailoring, and every surface of the Spectre is composed of the finest materials. A veritable Milky Way of stars adorns the panel in front of the passenger with the new car’s name proudly displayed. The infotainment screen and digital driver’s display are nicely integrated into the dashboard. Of course, customers will be able to customize their new Spectre with almost infinite possibilities. 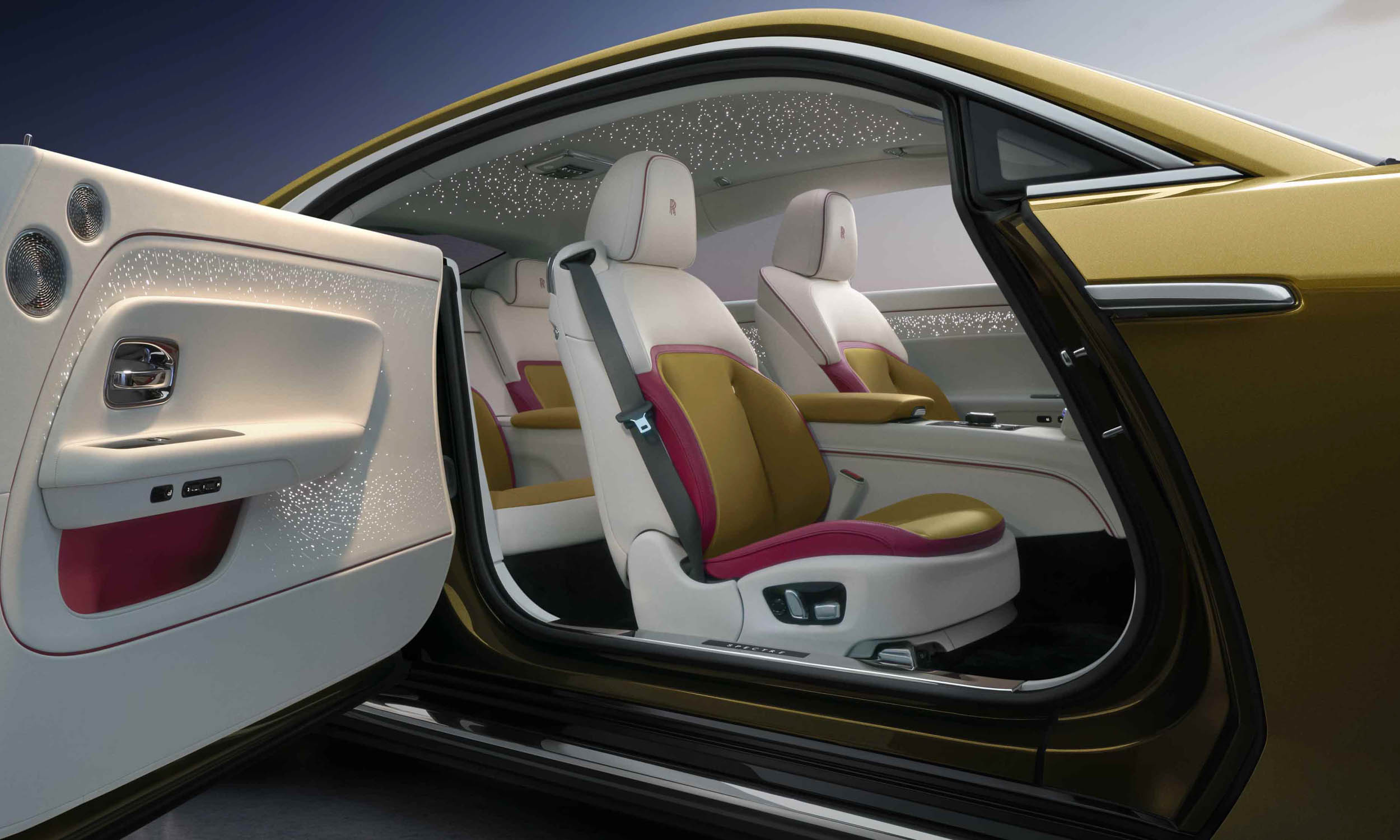 Starlight Star Bright
One of our favorite features on Rolls-Royce motorcars is the Starlight Roof, which simulates a star field in the ceiling. This stunning bespoke feature continues with the Spectre, but is further enhanced with the first-ever Starlight Doors, which also adopts LEDs to simulate 5,786 individual stars in each door. 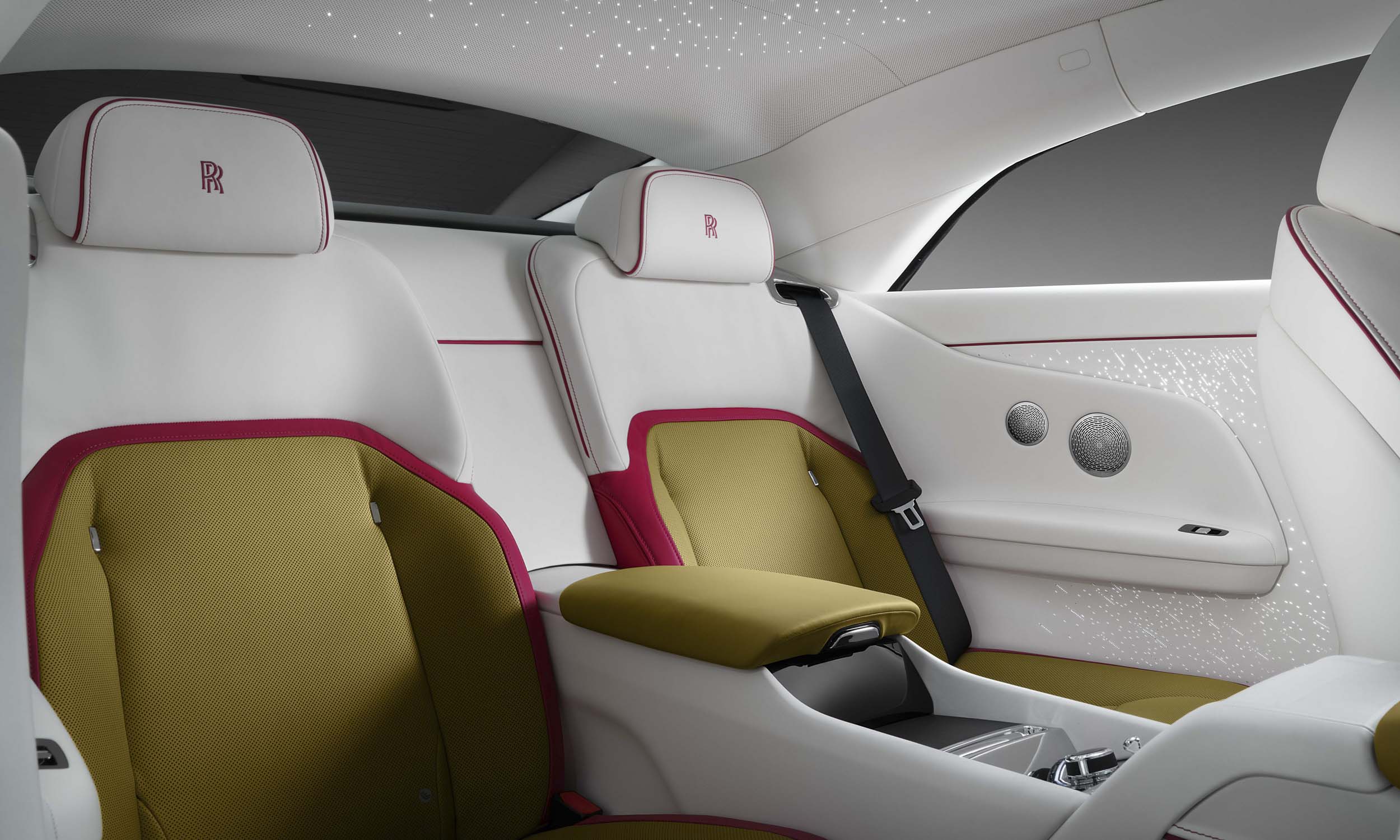 Room in Back
Granted the new Rolls-Royce Spectre EV may be a two-door coupe, although it’s designed to ferry up to four people in the utmost comfort. With large forward-hinged doors, access to the rear seat should be easy. Once inside, the passengers will find plenty of legroom and headroom, with starlight seeming to envelop the lucky occupants. 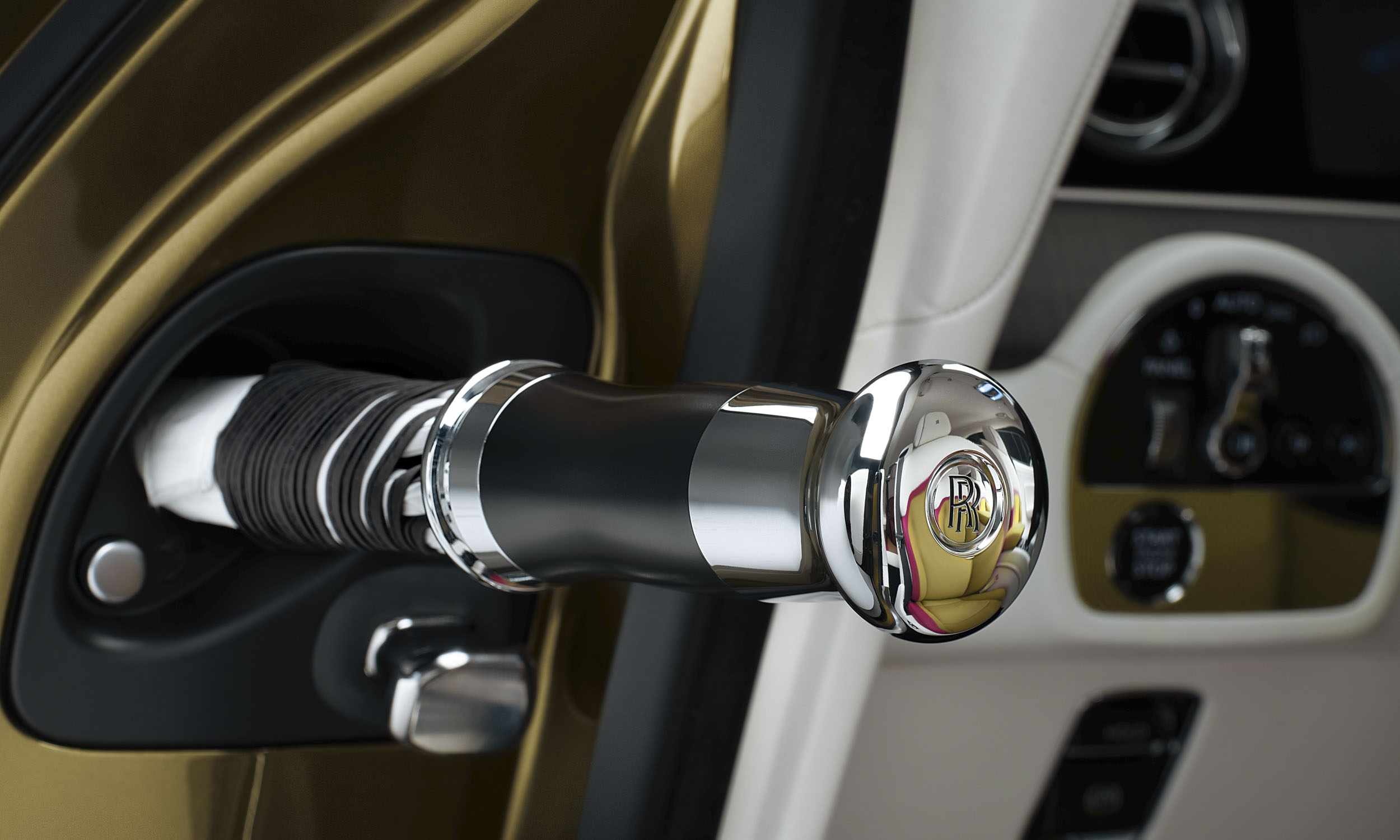 Umbrella
As with other models in the Rolls-Royce lineup, the Spectre features custom umbrellas that store in special receptacles integrated into the doors. 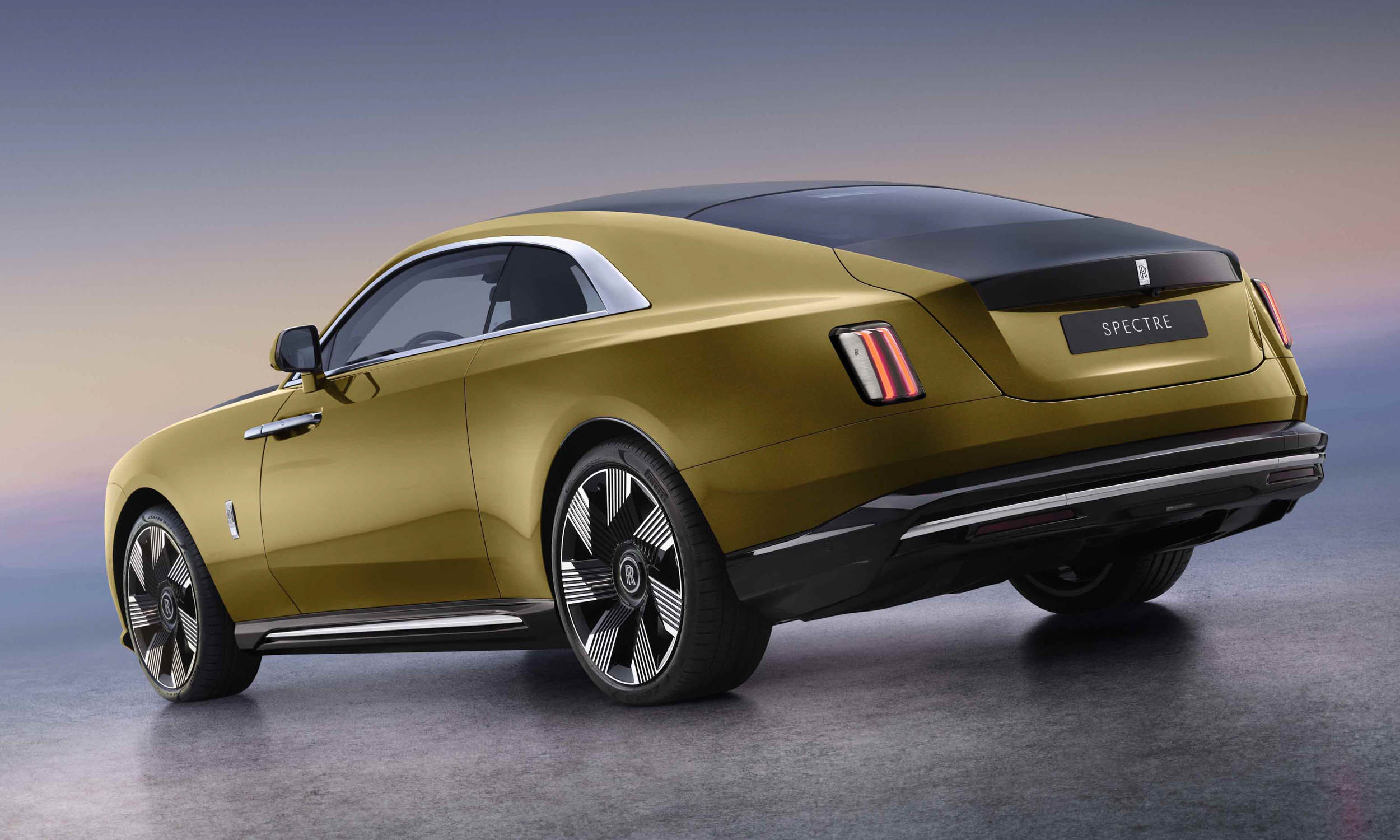 New Chassis
Spectre is built on the brand’s proprietary aluminum architecture. These underpinnings were developed in 2016 for the new Phantom, and are the basis of the Cullinan and Ghost. Rolls-Royce engineers built this new platform with the idea that it could work with completely different powertrains — including electric. That may say something about the future of those models, although today we’ll stick to the Spectre. 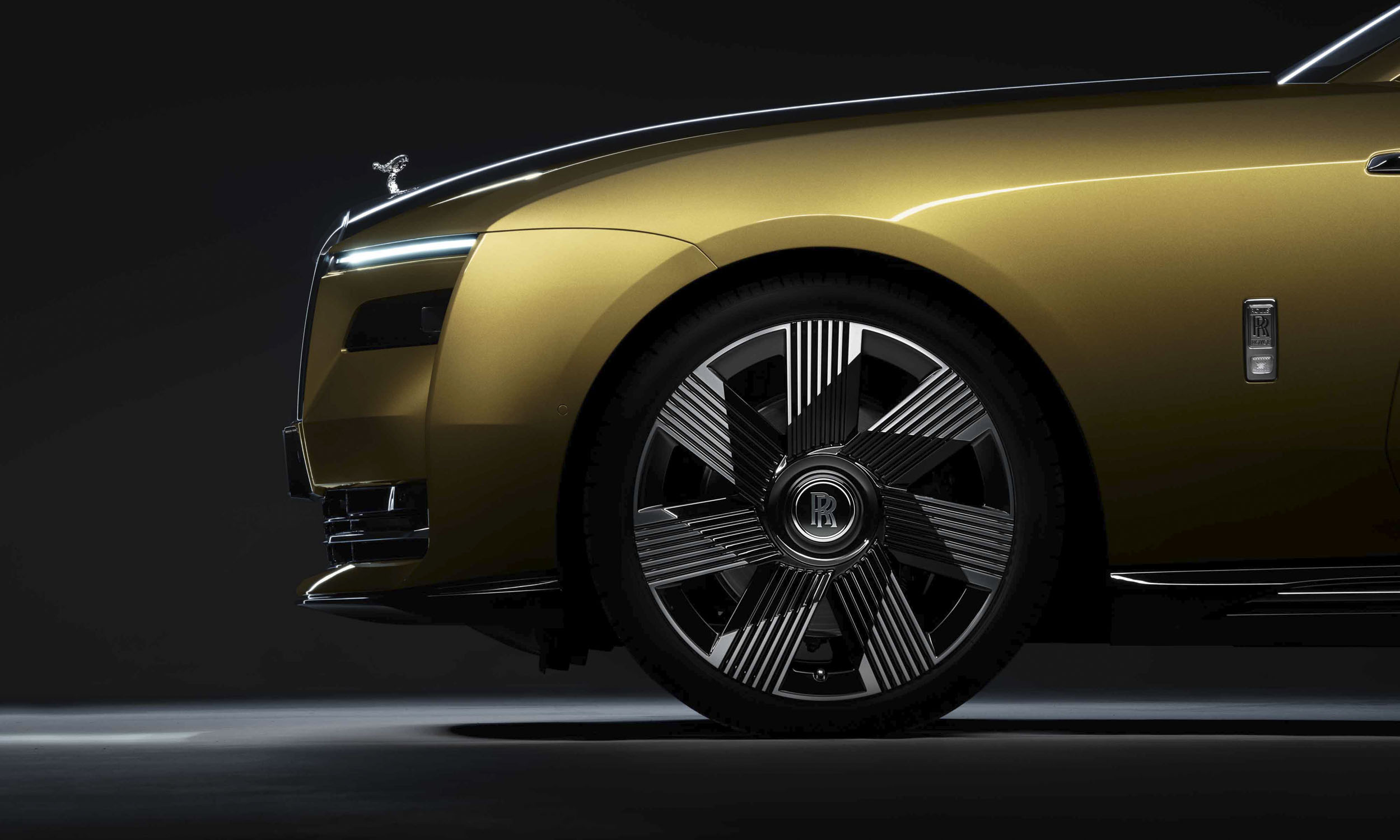 Rigid Structure
The vehicle’s dedicated platform also underpins the Spectre’s rigid body — in fact the most rigid body ever on a Rolls-Royce motorcar. A single side panel extending from the A-pillar behind the taillights provides additional stiffness. Engineers were also able to integrate the battery within the vehicle structure, which helps increase rigidity by 30 percent. 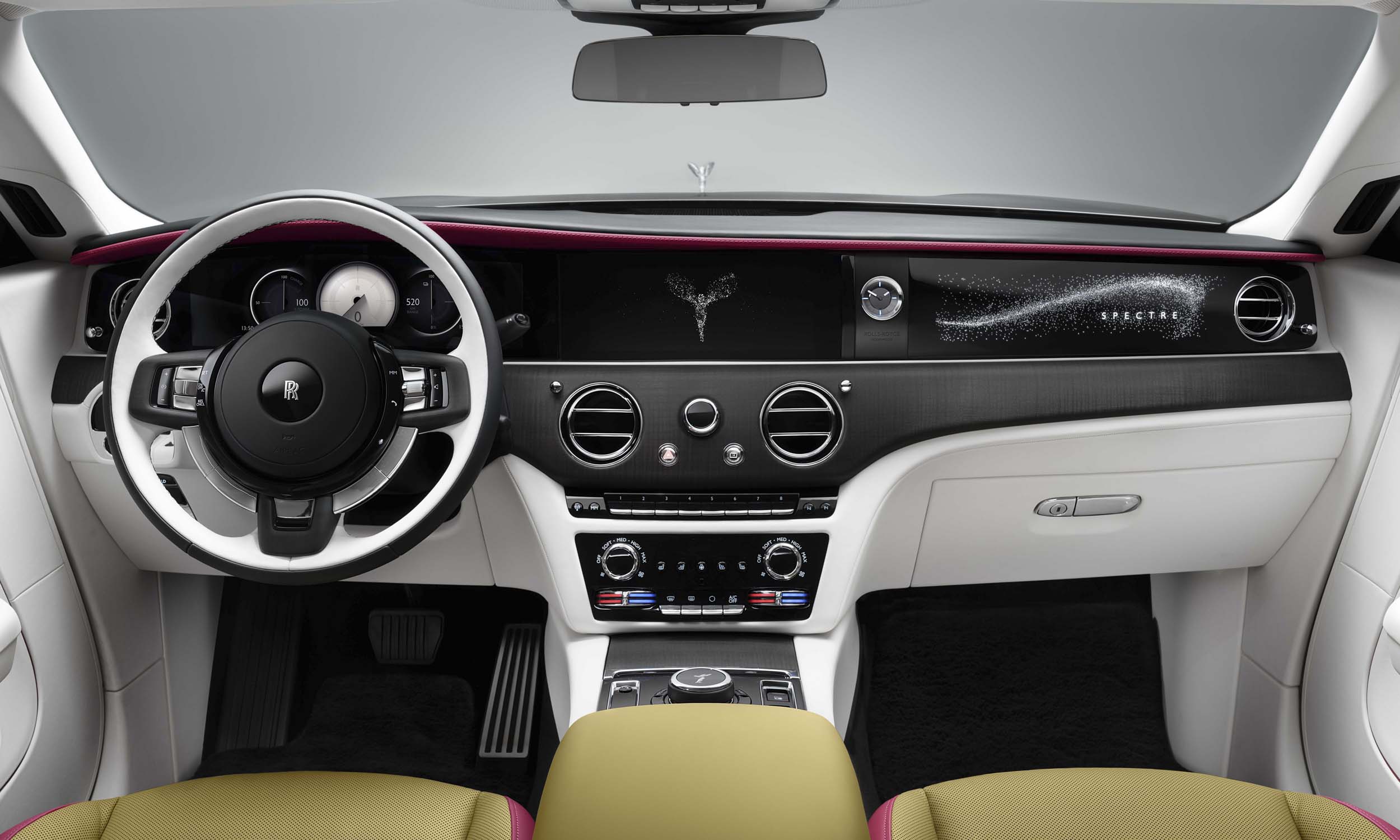 Magic Carpet
Rolls-Royce automobiles are known for their smooth, comfortable ride in what the company refers to as a Magic Carpet Ride. Spectre gets new Planar suspension technology that will further improve the magic. With new hardware and components, the system reads the road surface ahead and compiles data from the navigation system to prepare the Spectre for upcoming curves or rough roads. On straight roads, the Spectre’s anti-roll bars are disconnected, which allows each wheel to act independently. However, as the vehicle approaches a curve the anti-roll bars reconnect, suspension damper stiffness increases, and the four-wheel steering system activates — all this occurs before the vehicle even reaches turn-in for the curve. Once in the corner, more than 18 sensors monitor steering, braking, power delivery and more to keep the Spectre perfectly stable and comfortable for its occupants. 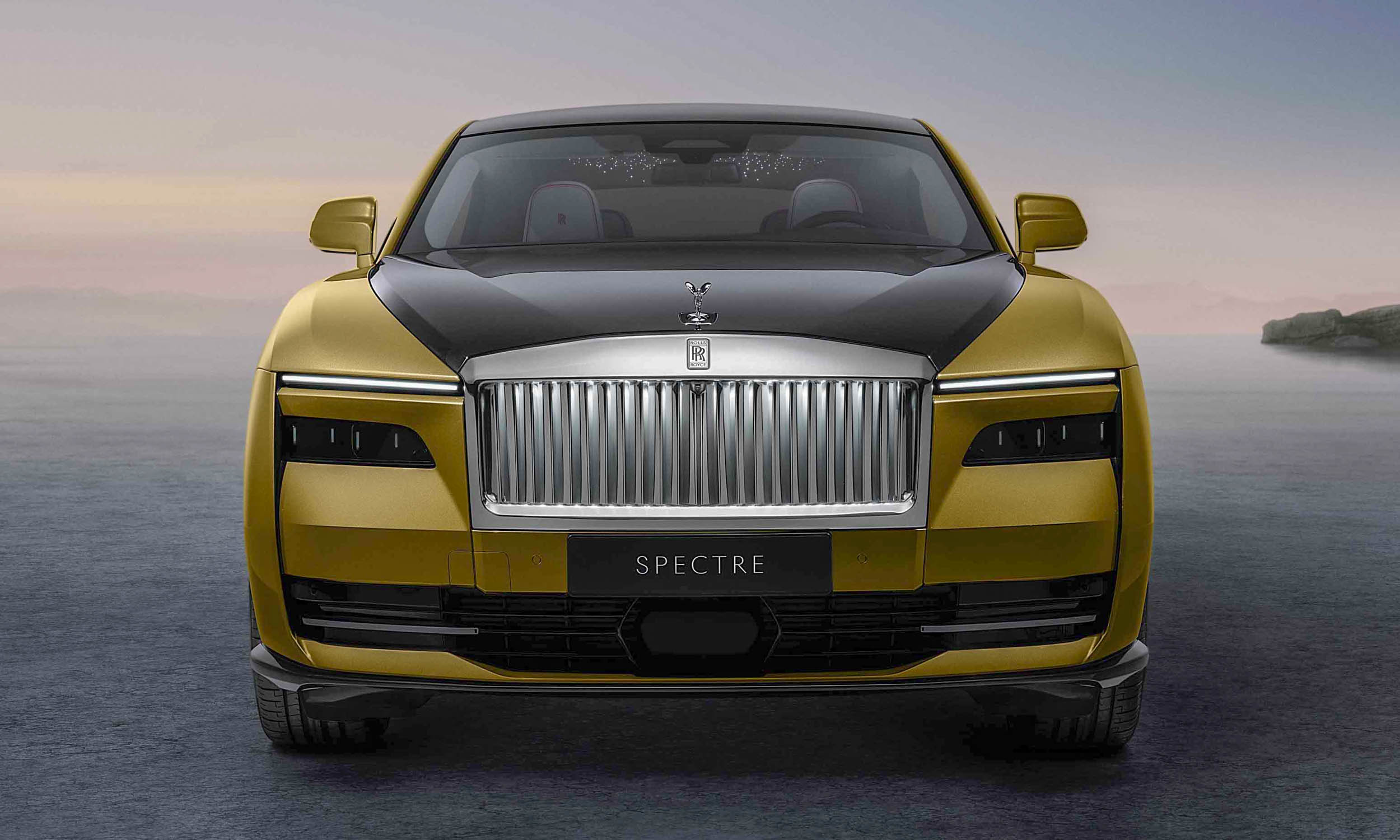 EV Power
Rolls-Royce hasn’t released all details about the Spectre’s powertrain, but we do know that preliminary data reveals the vehicle will be rated at 577 horsepower with 664 lb-ft of torque, which will move this big luxury coupe to 60 mph in a mere 4.4 seconds. Current estimates from Rolls-Royce put the total range at 260 miles. 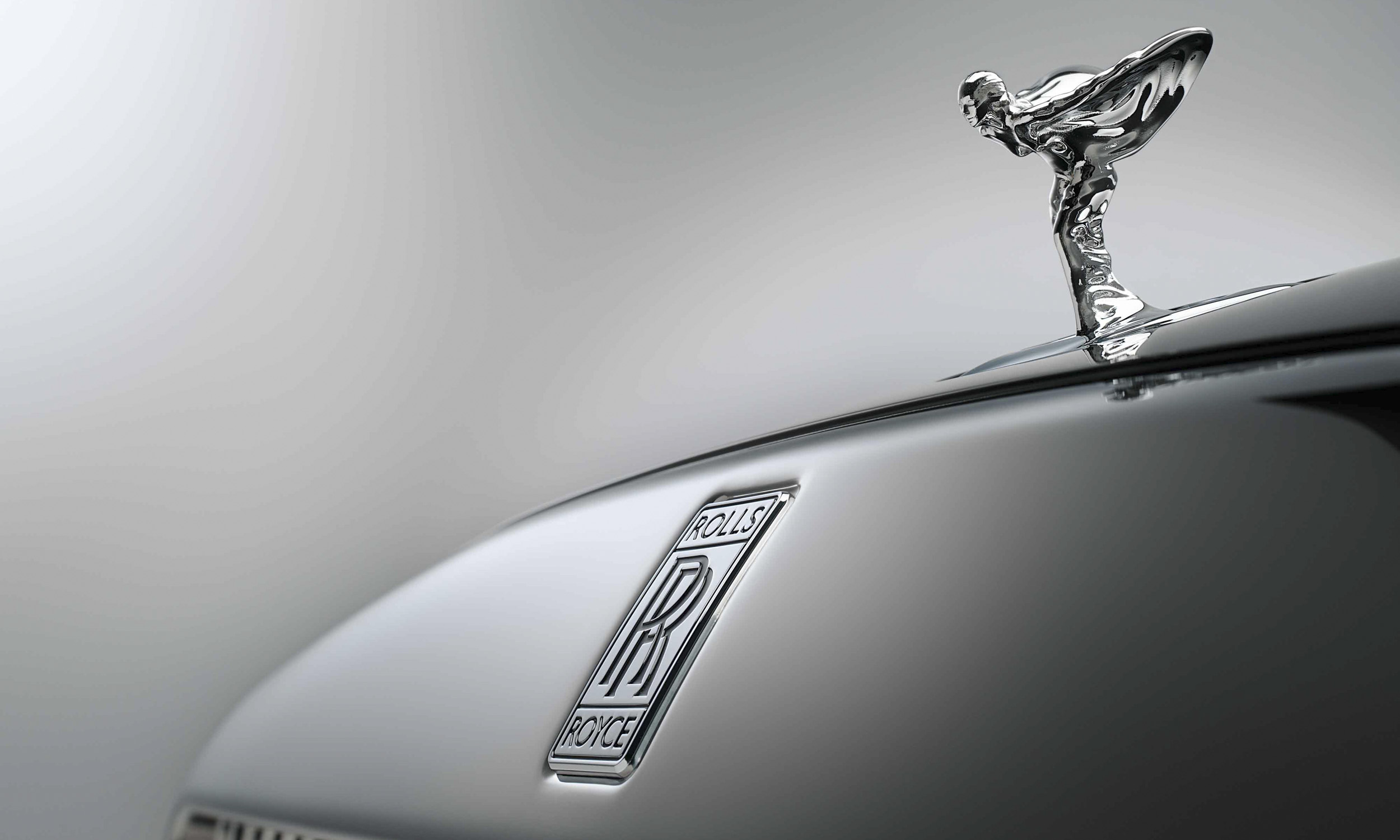 Coming Next Year
The new Rolls-Royce Spectre EV is still about one year away, with deliveries set to begin in the fourth quarter of 2023. Pricing will be announced closer to the on-sale date, although we anticipate the price to start around $400,000. 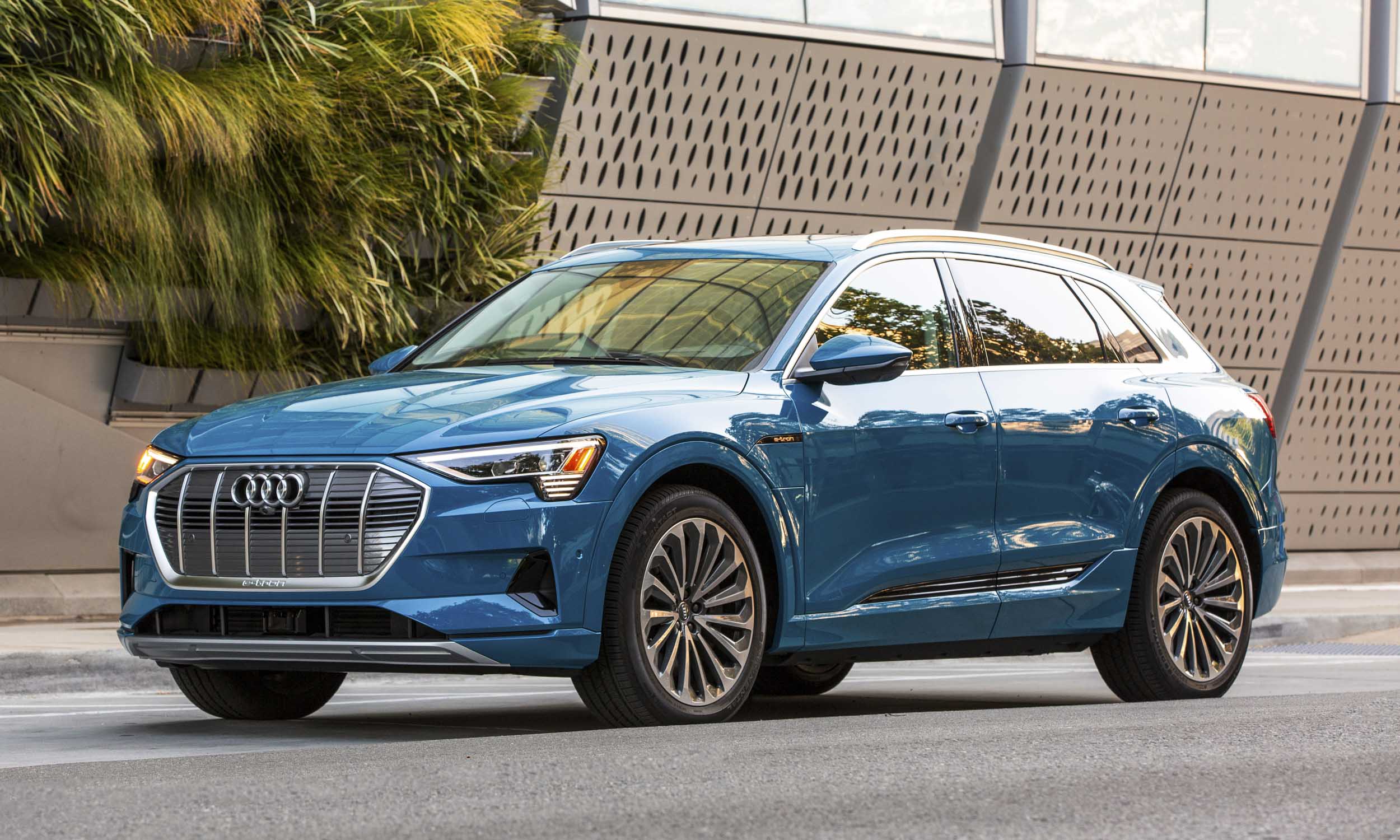 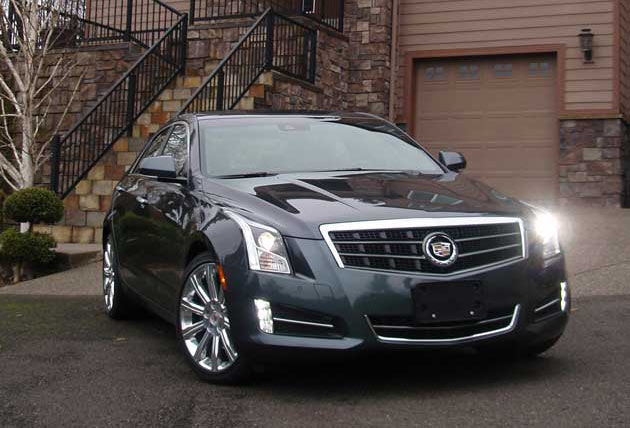