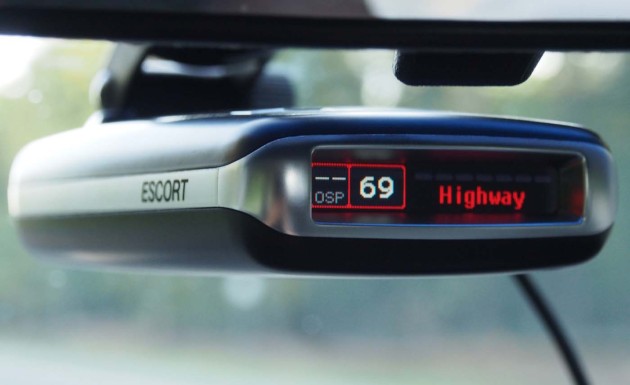 A review of the Escort Passport Max radar detector will follow, but first, a few things need to be pointed out – there are several radar detectors on the market today and all are aimed at diminishing one?s chances of garnering a citation from ?officer friendly? (or not) for traveling over the posted speed limit on his or her watch. Just as there are several levels and types of detectors, there are several forms of radar signals for recording excessive speed, with several bands and range capabilities.

There are also radar blockers, which are highly effective, but unfortunately illegal in most states. Wouldn?t it be wonderful if there were an obtainable personal devise that would literally fry the equipment utilized by law enforcement officials, rendering them totally ineffective? To my knowledge, such technology has yet to be developed. Yes, of course it would be just as illegal as radar blockers, but hey, fair is fair, isn?t it?

So, what are you up against in terms of radar types used by law enforcement? There are a variety of flavors of Ka-band, which is the most widely used form of North American speed measurement. X-band and K-band both seem to have drifted from law enforcement favor recently. Laser guns, possess the ability to target specific individual vehicles working in conjunction with newly emerging technologies such as photo documentation, and they are becoming increasingly popular, since they pretty much ensure that going to court to contest your ticket is destined to fail.

More specifically, X-Band frequency alerts are almost always false even though it?s still used by a few smaller, rural police departments that have old X-band units around ? a good reason to not tune it out completely. K-Band is used commonly for automatic door openers and vehicle safety systems, K-band is capable of wreaking havoc with radar detectors, and particularly since K-band radar guns are also a popular choice with police. Ka-Band generates very few false alarms. Ka has three frequencies devoted to speed measurement. When your detector delivers a Ka-band alarm. Pay close attention. Pop- Radar is a trademarked brand name from radar-gun-manufacturer MPH Industries. It features a mode in which the law enforcement officer?s gun emits very short bursts of K- or Ka-band radar (less than a tenth of a second). Technically, Law enforcement officials are not supposed to base tickets on POP readings ? Good luck with that, since Pop is capable of grabbing a speed reading without alerting detectors, enabling officers to then switch to a longer radar pulse that confirms vehicle speed. Pop isn?t in wide use, but it can pose a serious threat for drivers who depend on their detectors to avoid tickets. Laser, also known as LIDAR, emits a narrow beam that?s virtually impossible to detect until it?s aimed directly at your vehicle, which in most cases is too late, because by the time you receive a laser alert, the officer generally already knows your speed.

Since there?s a constant conflict between law enforcement and exuberant, spirited drivers and since both seem to continually benefit from ever advancing technology, how does one go about selecting the best protection from contributing to local and state revenues and avoiding increased insurance rates?

Yes, it?s possible to obtain a radar detector that falls into the $100 to $200 price range, but they generally fall short on features and effectiveness. You will obviously benefit from the best protection provided by more expensive units that are available. The simple to use Valentine One has long been perceived to be the most effective detector available for the past several years, priced at $399. with a V1 connection for Android and iPhone priced at $49. 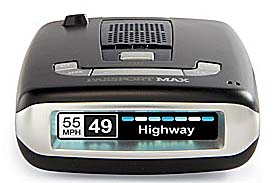 An advanced version of Escort?s 9500ix is the Escort Passport Max, which sells for $549.95. with an available Escort Live cable priced at $99.99 which comes with a free 90 day introductory schedule, but requires a monthly subscription to the database after downloading the app free of charge.

So, which one to buy? It depends totally on what kind of information that you want, and how much you are able or willing to spend. I actually have both the Valentine One and the new Escort Passport Max with the Escort Live cable.

I?ve always been pleased with the simplicity of the Valentine One and with its effectiveness, along with the fact that it pinpoints the direction that the radar signal is coming from. The Escort Passport Max however provides several extra features and a longer range with voice alerts as well as an audible and visual signal.

Since our world seems to be increasingly inundated by various radar signals that emanate from not only traffic-measuring devices, but automatic doors, adaptive cruise control, and blind-spot-monitoring ?systems that are able to emit the same frequencies utilized by law-enforcement agencies. Radar-detector users need to be able to distinguish the genuine threats from simply noise to sidestep local and state revenue coffers while moving along at a rapid clip. We?re not suggesting speeding as a regular practice mind you, but it?s always a good thing when you’re able to avoid being cited. 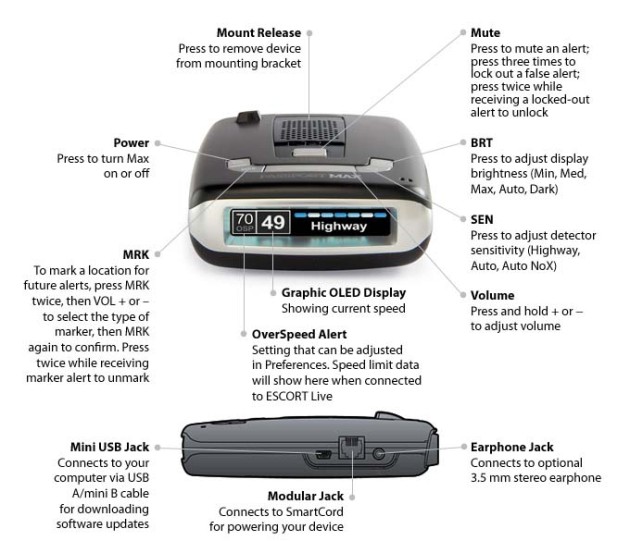 The Escort Passport Max offers a sliding scale that judges the severity of the threat, indicating which band is active, with both a visual and a voice announcement. The Passport Max operates via a 12v cigarette lighter compatible power cord that features buttons that the user to mute an alert or to mark the location of a threat. The Escort Passport Max mounts to the windshield (a practice that?s illegal in California) via a GPS-style ?Sticky-Cup? mount with a thumbwheel friction lock that allows angle adjustment, and a short arm that minimizes detector vibration. 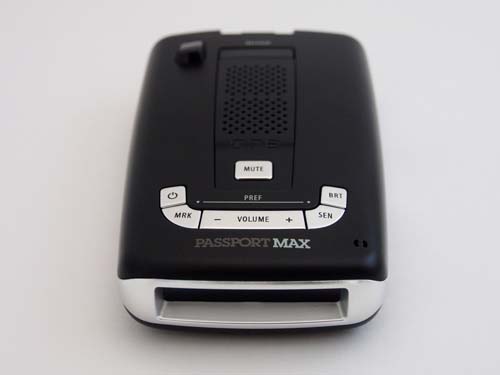 The Escort Passport Max operates by six recessed, top-mounted button controls, rather than raised like on the Escort Passport 9500ix and Escort Redline, which can make them more difficult to locate and operate simply by touch. There is no GPS on/off button, which eliminates disabling the function accidentally. Control buttons are backlit, easing the task of operating them at night. During alerts their backlighting flashes, a feature unique to the Escort Passport Max. 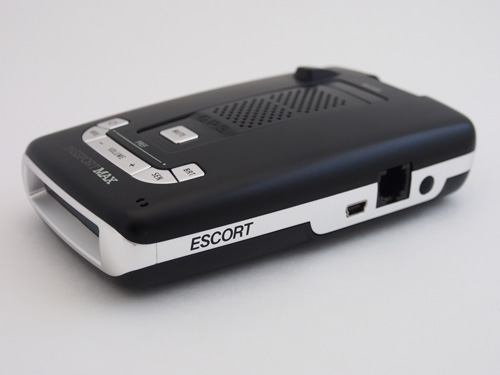 The OLED operating mode display?s font for?Auto, Auto NoX or Highway?is preset to blue, with a matching backlighting color for the control buttons. A series of seven horizontal LEDs that illuminate progressively from the center outward at 40 times per minute is displayed above the operating mode.?Vehicle speed is displayed far left is, with system voltage displayed on the right. When linked to the optional Escort Live system and either an iPhone or Android smartphone, the posted speed limit also appears.?Other display color choices are: amber, red or green. The font color for speed and vehicle voltage remains white regardless of the display color choice. This is the first use of an OLED display by Escort, and though colorful, it can be difficult to read during daylight and tends to disappear when viewed through polarized sunglasses. 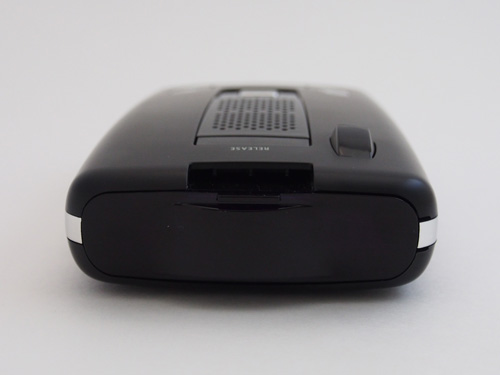 Plug-and-play operation through the factory-default Novice mode, which allows a choice of display colors, but renders all other user preferences inaccessible.?The Advanced mode allows access to a broad selection of user settings. Meter mode offers bar graph options: Spec and Expert?in addition to a Simple mode. During alerts this displays a generic “Caution” at speeds below 20 mph or “Slow Down” at any speed below the user-selected Overspeed threshold.

The Escort Passport Max provides an audible information-delivery system with a choice of voice alerts or two different sets of tones. The latter includes the standard Escort tones or unique doorbell-like chimes.

A 3.5mm audio jack is provided for headphones, an external speaker or helmet headset in stereo that?s protected by a rubber plug when not in use. An adjacent mini-USB jack allows for updates of the Defender camera database or detector firmware revisions. This camera database has proven best-in-class through an extensive test.
Standard features include: AutoLearn; AlertLock; and Speed Alert One unique feature is variable-delay automatic power shut-off, called AutoPower. which can be set at 1, 2, 4 or 8 hours, with a factory default of four hours.?Speed-variable sensitivity enables the microprocessor to reduce sensitivity at low speed, limiting most false alarms in town, while the sensitivity rises proportionally as speed increases, for maximum protection.?Escort Passport Max filters true alerts, those from radar guns, from unwanted false alerts, such as automatic door openers with exceptional accuracy that competitive detectors repeatedly emit false alerts for. 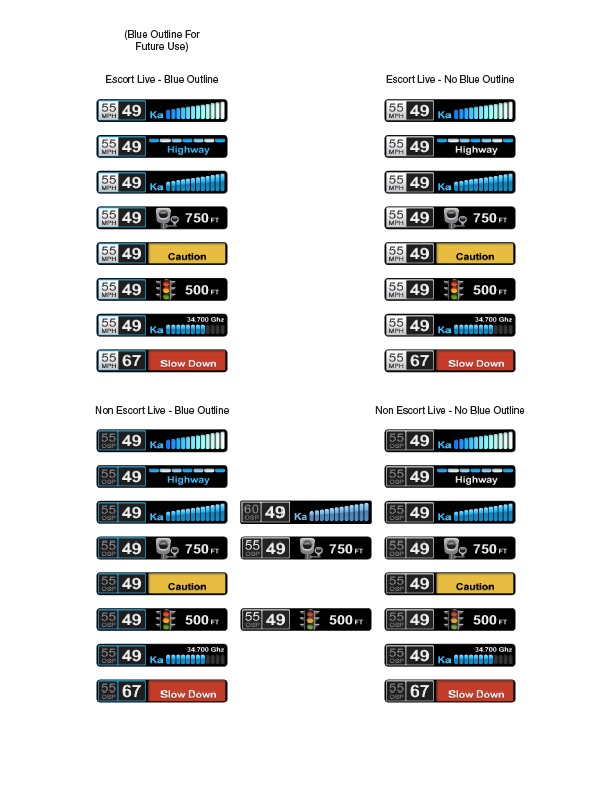 The Passport Max is also equipped with Traffic Sensor Rejection (TSR) software, which can automatically ignore radar pings from wireless traffic sensors used on certain highways. Working in tandem with the loaded Defender database and AutoLearn, the Passport Max’s DSP should only beep for real threats, once you’ve given it ample time to learn your area.

Because the Passport Max only has a general idea of your vehicle location, and doesn’t include maps, it may sometimes give audible alerts for approaching red-light cameras on surface roads when driving on an adjacent highway, which can be annoying, but it?s certainly better to receive a few unneeded alerts than to wind up with a ticket for blowing through a yellow light.?When the Passport Max begins beeping, the selectable AutoMute function lowers the volume automatically after a second or two, keeping the detector from becoming offensive once it’s gotten your attention. Tapping the Mute button on the SmartCord allows silencing the unit.?A SmartMute feature enables drivers to manually mark false alarms by triple-tapping the Mute button on the SmartCord when alerted. Notifications for these detections will still appear on the screen the next time you pass the false threat, but the beeping will not sound. If, later, a false threat turns out to be real, a double-tap will remove it from the Max’s false-positive database.

Looking at the box that the?Passport Max comes in, ?and two things are noticeable. First, the Max is depicted displaying the current speed limit. Secondly, it’s touted as being compatible with the Escort Live app for Android or iOS. Turning the box over and reading the fine print informs one that to gain this app compatibility, it?s necessary to purchase the $99.99 Escort SmartCord Live, which replaces the included SmartCord and adds the Bluetooth connectivity needed to make the wireless connection. With the SmartCord Live plugged in, and paired with a smartphone, and with the app downloaded and running, the Passport Max gains some new capabilities: users can adjust the Max’s settings via the paired phone’s touch screen, which can be considerably easier than manipulating the device’s control buttons and small screen.

Additionally, the phone’s data connection feeds live-updating Defender database data with up-to-the-minute positioning for speed traps, speed cameras, red-light cameras, and more to the Passport Max, allowing it to automatically ignore false positives reported by other Defender database-reporting drivers. Also, speed traps detected by the Max are reported automatically to the Defender database, without pressing any buttons. Getting current speed limit data requires the app’s data connection. The SmartCord Live cable is specific to Android or iOS. If you want to use both, two cables will be necessary.?The Escort Live app only includes a limited period of free introductory access to the Defender database, after that, an additional monthly fee or annual subscription to retain access is necessary. ($4.99 per month or $49.99 per year).

Highway, Auto and Auto No X

Bottom line, the Escort Passport Max is impressive with its easy-to-understand OLED-based interface, the capability of detecting threats earlier than the previous generations, and its ability to tune out those false positives that make other radar detectors irritating when used daily. It is not initially intuitive to set up personal preferences, but with time it becomes more user friendly. Yes, it?s expensive, but in the long run, it?s cheaper than paying for numerous citations for having a lead right foot.