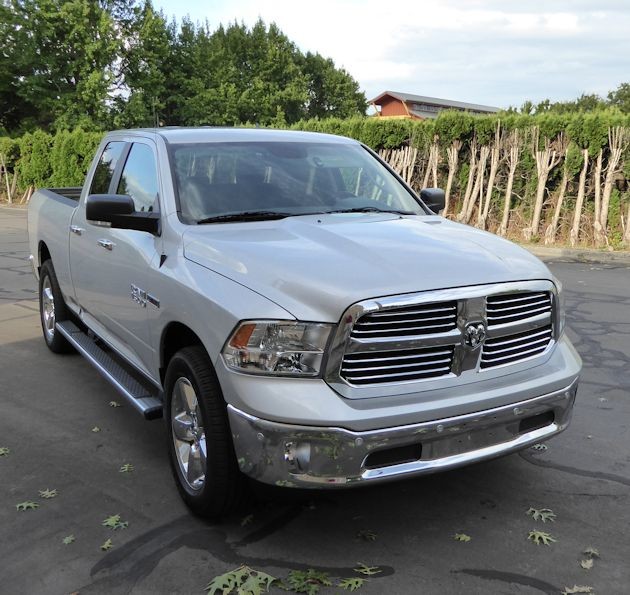 It wasn?t too many years ago that the Dodge Ram truck wasn?t on Top 10 Best Selling Vehicles in the U.S. list, but that has changed dramatically the last few years with the Ram truck ensconced as the third best-selling vehicle behind the Ford F-Series and the Chevrolet Silverado.

Who knows if changing the name played a part in the improved sales ranking or not ? we think it?s more because they are making some pretty terrific trucks. (Note: In 2010 the Dodge affiliation was dropped and the Ram truck became a standalone brand under the FCA (Fiat Chrysler Automobiles) umbrella along with Chrysler, Jeep, Dodge, Alfa Romeo and Fiat.) They claim the name change was made to allow the Ram brand to concentrate on the products they do best?trucks, and it seems to be working. 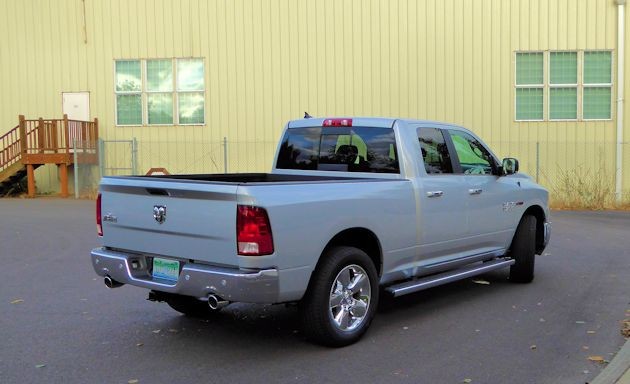 The Ram?s good engineering, performance, styling and value have paid big dividends on the automotive award podiums the last few years. Ram was named Motor Trend Truck of the Y ear an unprecedented two consecutive years — 2013 and 2014. It also was named North American Truck of the Year in 2013. 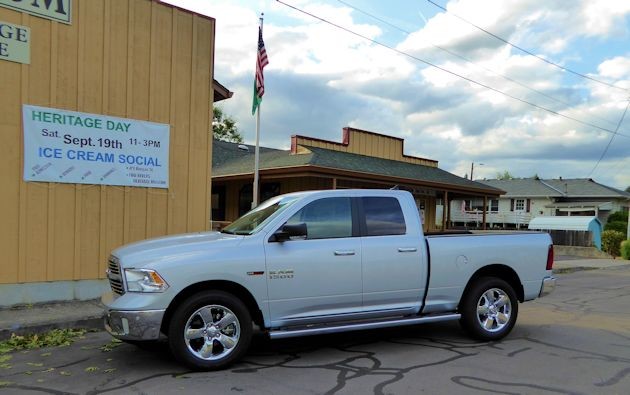 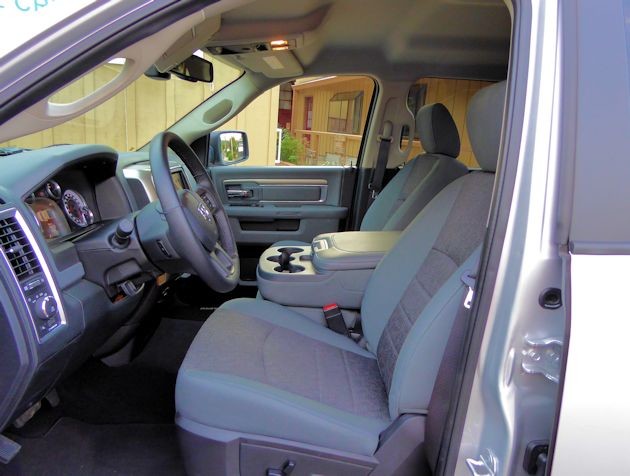 We?ve been advocates of diesel engines for years, and even with the recent ?diesel-gate? problems we think this Ram EcoDiesel is a good choice. Producing 240-horsepower and 420-lb.ft. of torque the 3.0-liter V-6 Ram diesel engine offers best-in-class economy at 21 mpg city, 29 mpg highway and 24 mpg combined when paired with the new eight speed automatic transmission and two-wheel drive. It also has a towing capacity of 9,200 pounds. 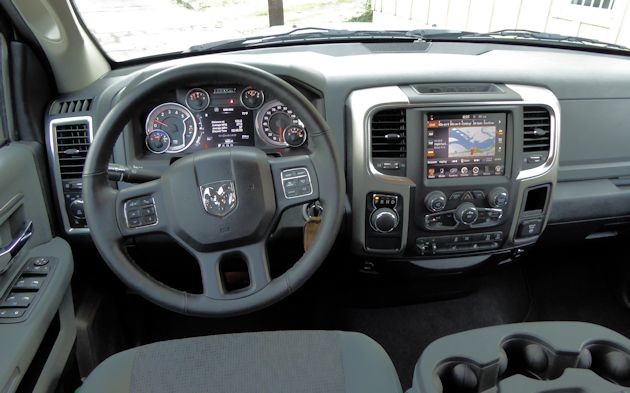 The EcoDiesel truck with its eight-speed automatic transmission accelerates from 0 to 60 mph in 8.9 seconds, but it feels faster, thanks to the characteristic linear acceleration you get from a diesel engine.

The EcoDiesel, which is one of the most advanced diesel engines available was developed and is manufactured by VM Motori (a Chrysler supplier since 1992). It is equipped with a diesel oxidation catalyst, diesel particulate filter and selective catalytic reduction. It meets emission standards in all 50 states. 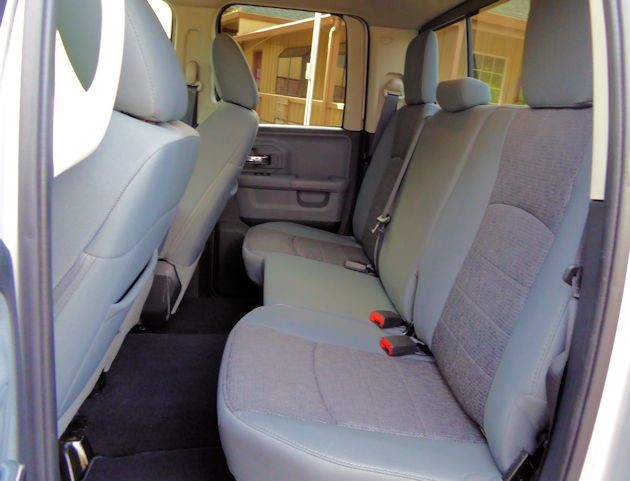 We actually averaged 24.1 mpg in a combination of city and highway conditions, and not with the most frugal driving habits. It?s exciting to feel the strong torque produced by this engine under full throttle. The Ram is also offered with an award winning 3.6-liter V-6 or the venerable 395-hp 5.7-liter Hemi V-8 gasoline engines. 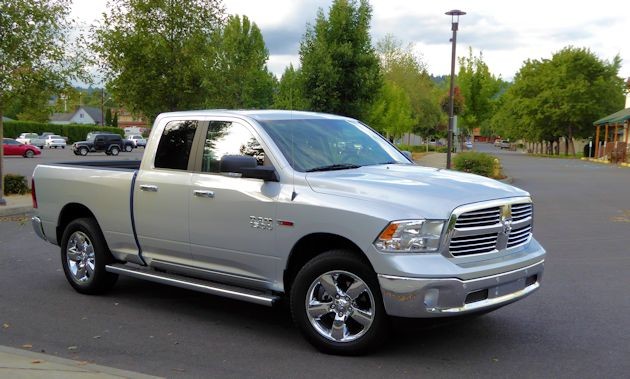 The Ram received a styling update in 2013, so changes since then have been token. The styling has some advantage beyond just looking good. The Ram has a low (for a truck,) 0.36 CD (coefficient of drag). It also uses some of the Fuel Saver Technologies like a thermal management system and active aerodynamics, including grille shutters and air suspension. The Active-Level 4-Corner suspension is available in all models except the High Fuel Efficiency model. The air suspension automatically keeps the Ram flat, even with a load or a trailer. It?s also makes it easier, when lowered, for passengers to enter and exit, plus it improves the ride control on and off road. 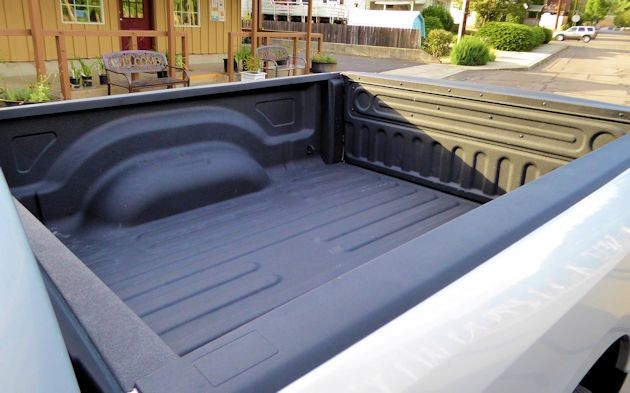 The 2015 Ram truck is available in 10 different trim levels including: Tradesman, Express, HFE, SLT, Big Horn/Lone Star, Outdoorsman, Sport Laramie, Laramie Long Horn and Laramie Limited (Whew). There are two regular cab models with a choice of 6 ft. 4-in. or an 8 foot box. In addition to the three engines previously mentioned, the Ram can be ordered with rear-wheel drive or four-wheel drive.

Like most of the full-size trucks sold in the U.S, the Ram has a full spectrum of options which allow the buyer to customize his or her truck to the smallest detail and with a massive of comfort and convenience options. 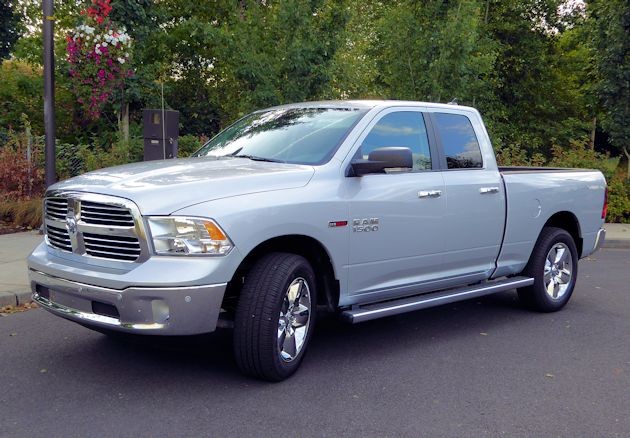 In the technology department we highly recommend the Uconnect multimedia system and the available navigation system. We think FCA is a leader in the infotainment and communications systems. The touch screen is user friendly and it reacts quickly to commands whether they come from the touch screen or voice commands. In addition, it has all the connectivity inputs like Bluetooth, USB, AUX and SD cards. There are some redundant controls on the face and the backside of the steering wheel so the driver can keep hands on the wheel while making changes. The SiriusXM Satellite radio system is also interfaced with handy features like Sirius XM Traffic and Travel Link.

Safety technologies include all the electronic braking and stability aids and we recommend the optional ParkSense assists, and ParkView backup camera. The truck is so big it is difficult to negotiate parking lots or a crowded garage without these features.
Pricing starts as low as $26,855, including the destination charge, for the 2015 Ram 1500 Tradesman with regular cab and two-wheel drive. On the other hand, the price can climb as high as $55,375 for the very well-equipped Limited model with four-wheel drive. Even though the Limited has few available extras and if you add most of them the Monroney can reach close to $60,000. 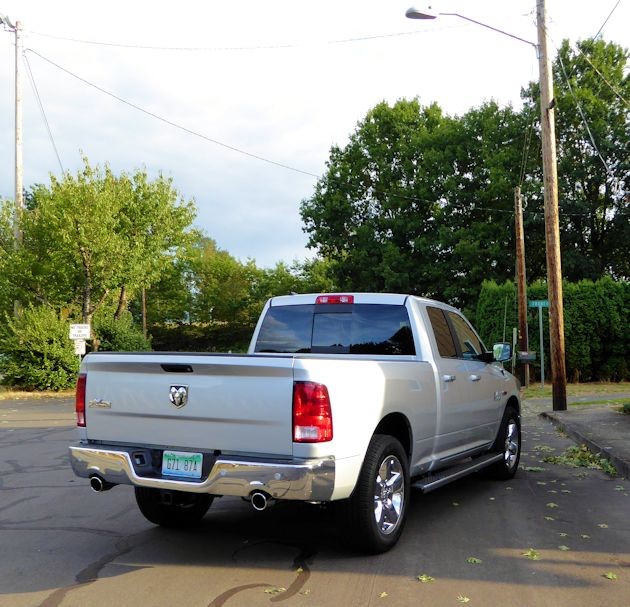 The Ram 1500 is just one part of the Ram family which includes the heavy duty 2500 and 3500 models along with a series of Ram Chassis Cab trucks and the new ProMaster and ProMaster City vans.

If you?d like to get the whole story we recommend stopping in at your neighborhood Ram Truck dealership or going on line to http://www.ramtrucks.com . 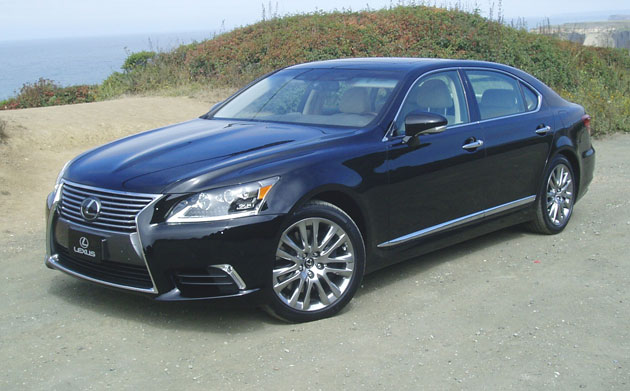 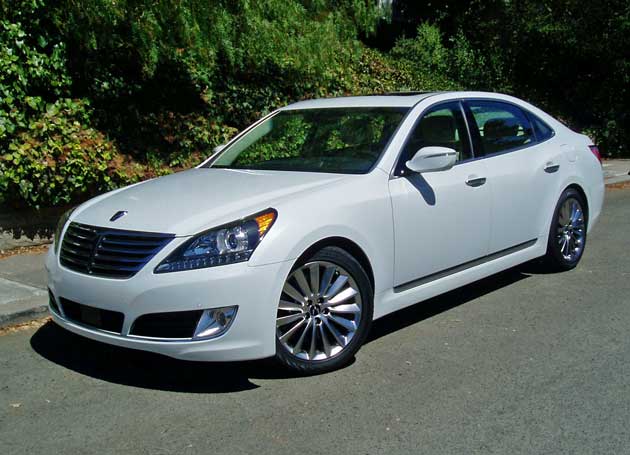