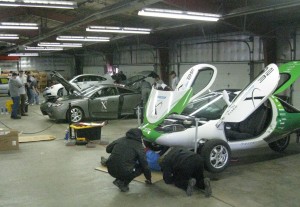 BROOKLYN, MI (April 26, 2010)- With eyes fixed on a $10 million purse, 28 teams, representing 36 super fuel efficient vehicles from around the globe, start arriving at the Michigan International Speedway (MIS) in Brooklyn, MI to officially start on-track performance testing for the Progressive Insurance Automotive X PRIZE.? The goal is to create a production-capable and super fuel-efficient vehicle that exceeds 100 MPGe (miles per gallon or its energy equivalent).

Established automakers, start-ups, universities, inventors, and even a high school are among the diverse groups of teams representing 14 U.S. states and nine countries.???These teams are now one step closer to their share of the $10 million prize purse, to be awarded this September to those that survive the rigorous multi-stage competition.

This week’s events at MIS kickoff the first of three on-track performance testing stages-Shakedown, Knockout Qualifying, and Finals-each aimed at evaluating the efficiency, safety, and performance of competition vehicles under real world conditions.??At the completion of the Finals Stage on July 30, surviving vehicles move on to Argonne National Laboratory outside of Chicago, IL for three weeks of Validation Testing before the competition winners are announced this September.

The Shakedown Stage, scheduled for April 26-May 7, is an un-scored stage in which competition officials will conduct safety checks and inspections on competition vehicles, followed by a series of on-track challenges designed to allow teams an opportunity to test their vehicles without fear of penalty, shake out problem areas, and ready their vehicles for the Knockout Qualifying Stage that follows. 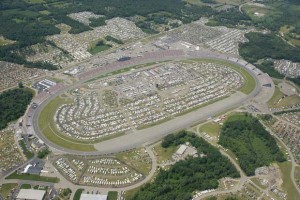 Winners will be selected from two classes: Mainstream and Alternative.??The following is a complete list of the 28 Qualified Teams, along with the class in which they will compete and their fuel type. Note that some teams are entering vehicles in each class.??For more information on these teams, please visitwww.progressiveautoxprize.org.