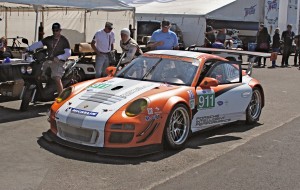 The Porsche powers that be decided to bring the totally revised and still officially unclassified Porsche GT3 R Hybrid back to the U.S. for what could possibly have been it?s last appearance at the most recent ALMS (American Le Mans) race, held at the legendary Mazda Raceway at Laguna Seca and presented by Tequi;a Patron. That decision may be rethought, since the highly unusual racer finished tenth overall in the grueling six hour race, ahead of even the GT Class winners.

Piloted by Romain Dumas (France) currently of Basel, Switzerland and Richard Lietz of Yobsitz, Austria, the all-wheel drive car to a most impressive finish among what is essentially a race c9onsisting of multiple classes of high-tech sports cars competing on track at the same time. Classes include LMP1, LMP2, GT, UNC (unclassified), LMPC and GTC. 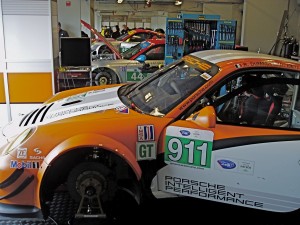 The groundbreaking number 911 Porsche GT3R Hybrid with its highly visible and familiar Orange, White and Gray paint scheme is a product of the ALMS mission of producing sustainable, efficient and environmentally responsible transportation solutions. The ?Green Racing? movement has been instrumental in reducing oil consumption and greenhouse gas (GHGs) emissions by more than 40 percent over the last five years of competition. This reduction has been realized through the testing of new and evolving energies such as clean diesel, renewable bio-based fuels as well as hybrid powertrains along with other automotive technologies including aerodynamics, the use of lightweight materials, advancing tire technologies and sophisticated internal combustion engine evolvbement. The ?Green Challenge?? results in what is actually a race within a race, created by the U.S. Department of Energy. 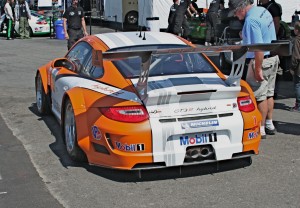 The Porsche 911 GT3R version 2.0 debuted earlier this year at the 24 hours of Nurburgring, achieving the same quick lap times as its top rivals, while consuming considerably less fuel and requiring fewer pit stops. A collision and two broken transmission flanges were instrumental in keeping it from a podium finish. The car is powered by two permanent magnet synchronous 75 kilowatt electric motors on the front axle (15,000 rpm maximum speed) that supplement the 465 horsepower, four-liter flat-opposed six at the rear. The combination embodies the ?Porsche Intelligent Performance? philosophy. Electric energy is generated during braking and stored in an electric flywheel , which some have lovingly dubbed the ?Hamster? wheel. Electric energy is automatically delivered to the front wheels during acceleration, supporting the internal combustion engine,?which not only results in reduced fuel consumption, but in extending the cruising range on the track circuit. 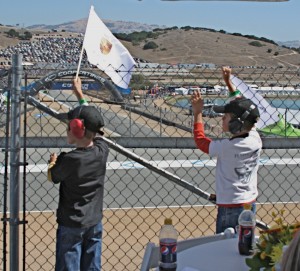 Porsche race fans Will and Sam

The 911 GT3 R Hybrid has undergone further enhanced development since 2010, and compared to its predecessor, it is now 50 kilograms lighter.

In addition to the outstanding tenth place overall finish of the 911 GT3 R Hybrid 2.0 in a field of 39 competitors, another Porsche ? a 911 GT3 RSR (number 45) driven by Patrick Long and Jorg Bergmeister of the Flying Lizard Motorsports team finished first in? the GT class after passing class leading Ferrari on the last lap when the Ferrari?s fuel supply was deleted. Winning is winning, no matter how.