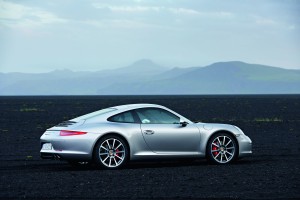 Attendees at the 2011 Frankfurt Motor Show will get to see the first showing of the seventh-generation 911 Carrera?with its sleek new stretched silhouette.

The sports car icon has a 3.9 inches longer wheelbase and shorter stance for a fresh more athletic appearance, but as always, with Porsche, the changes are evolutionary. ?Wide-arched fenders, emphasize the wider front track, while side mirrors mounted on the upper door edge give a visual impression of width. 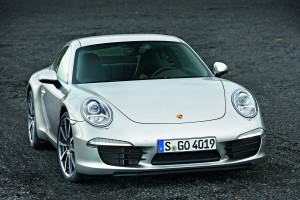 Buffed up with an aluminum-steel composite construction, the new 911 has shed 100 pounds of body weight, while stiffening up the structural rigidity and optimizing aerodynamics.? A wider, variably extending rear spoiler and design tweaks take front and rear lift to near zero while retaining the Cd value of 0.29.

Carrera GT?Interior design cues influence the new 911 Carrera.? A higher center console and high-mounted shift lever or gear selector bring all the controls closer to the steering wheel to integrate the driver more with the interior.? The instrument cluster has five round gauges centered by the tachometer and one gauge is a high-resolution multifunction screen. 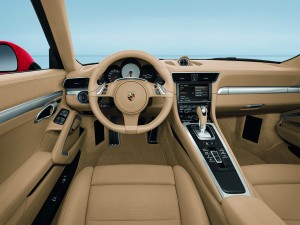 Like all new Porsches, performance is better, and so is fuel economy thanks to a Start Stop function, engine and transmission thermal management, electrical system recuperation and the world?s first seven-speed manual transmission.? The twin clutch Porsche Doppelkupplungsgetriebe (PDK) transmission has ability to ?sail? or coast at speed during low load driving conditions. ?The new electro-mechanical power steering offers Porsche?s typical precision and feedback but also helps increase efficiency and reduce fuel-consumption.

The first new 911 models will arrive in U.S. dealerships in February 2012. The new 911 Carrera Coupe has a base MSRP of $82,100, (excluding destination) and $96,400 for the 911 Carrera S Coupe. ?Porsche says both models include a high level of standard equipment than the previous models.? 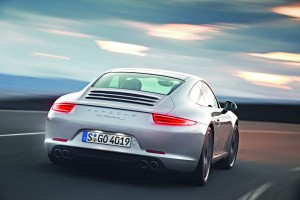