The State of Oregon working with a variety of businesses took major steps to create a system of electric vehicle (EV) charging stations along the entire length of north/south Interstate 5 and in major cities along the corridor.

ECOtality, Inc. a leader in clean electric transportation and storage technologies, took the biggest step working with the State of Oregon announcing the expansion of the EV Project to Southern Oregon to the California border. 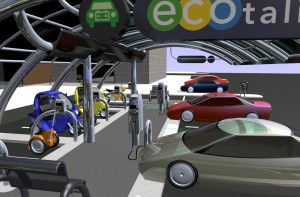 ECOtality is the company hired to supervise the construction of the largest deployment of EV infrastructure to date. The $230 million public-private initiative is funded in part from a $114.8 million grant from the U.S. Department of Energy through the American Recovery and Reinvestment Act (ARRA). The EV Project includes 16 cities and major metropolitan areas in six states.? It will result in the installation of approximately 1,500 charging stations by June 2011.

“Oregon is leading the West Coast in the adoption of EV infrastructure,” stated Jonathan Read, CEO of ECOtality, Inc. “With this announcement, residents will be able to travel the entire state of Oregon, from the Washington border in the north to the California border in the south, and can rely on the EV infrastructure ECOtality is installing. In the future, ECOtality hopes to expand our deployment on the I-5 corridor to link the West Coast from Mexico to Canada.”

“Our vision for Oregon is to create an electrified highway so that Oregonians, and our visitors, can travel throughout our state on business and leisure using the next generation of clean, electric vehicles,” said Oregon Governor Ted Kulongoski. “With the partnership of the federal government, our utility companies, local governments and private companies like ECOtality, we are quickly turning that vision into a reality.” 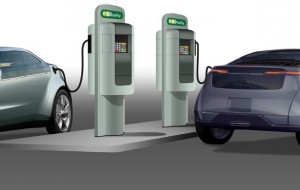 A majority of the units installed will be ?level two? chargers that motorists could use to charge from 45 minutes to three hours.? There are the type of units a retail business may install to encourage customers to spend time shopping. A few units will be the fast chargers, which are capable of recharging batteries in just 15 to 30 minutes.

In a separate announcement, BP Products of North American, Inc. said it plans to install chargers at BP and Arco stations in Portland, Eugene, Salem and Corvallis as part of the state plan to get 1,100 charging stations in Oregon by July 2011.

The charging stations are part of Eaton’s range of products and services to help provide the infrastructure for the EV corridors and across North America. Eaton?s quick charger can recharge an electric vehicle to 80 percent of battery capacity in 15 ? 30 minutes. This type of recharge capability addresses the range anxiety anticipated by EV drivers and is expected to significantly aid vehicle adoption, utility and utilization.