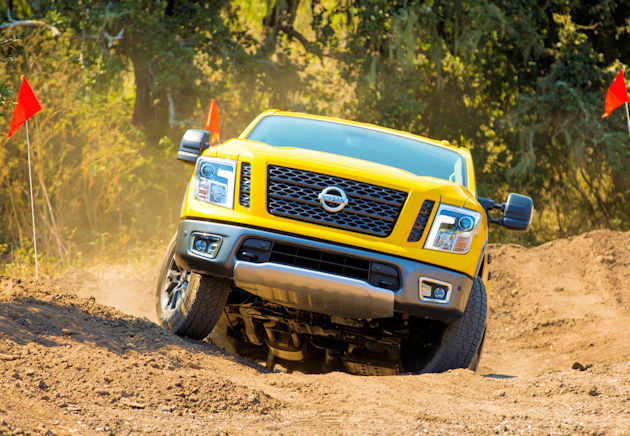 By Bill Schaffer
Carmel Valley, Calif. and Washougal, Wash. ? Nissan has worked hard for years planning to break into the U.S. truck market in a big way, and if the latest Titan offerings are any indication, the other truck manufacturers should be on full alert.
I don?t think Nissan is going to surpass Ford, General Motors and Ram trucks, but I expect they will certainly cut into their sales. This new Titan is impressive!

As part of Nissan?s ?Year of the Truck? campaign held in Carmel Valley, Calif., I was able to get a brief sampling of the latest truck offering, in addition to the new Nissan Titan including the full-size Armada SUV and the latest version of Nissan?s original SUV, the Pathfinder. 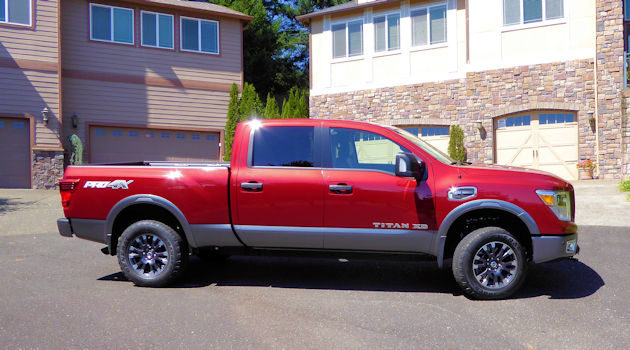 The Nissan ?Year of the Truck? started with the new Titan introduction earlier this year and will continue over the next seven months with a new SUV announcement in September, a new crossover introduction in January 2017 and it will finish in February 2017 when Nissan rolls out the rest of the Titan Lineup. It promises to be an exciting year for truck fans and will mark Nissan?s full scale assault on the lucrative American truck market. 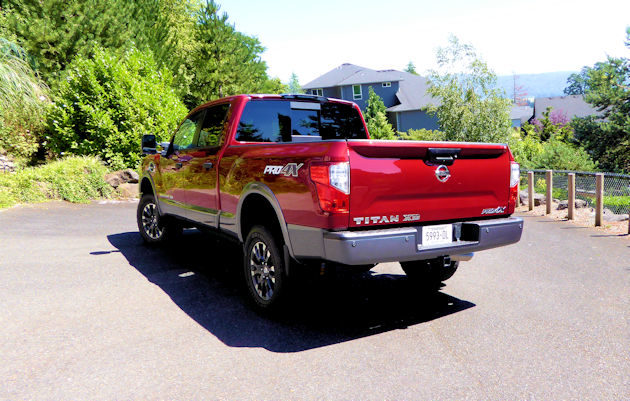 I spent time in the Titan Crew Cab V8 at the introduction in Carmel Valley, Calif. Then at home the same week, my wife Barbara and I spent a week driving the heavy-duty Nissan Titan XD with its powerful Cummins diesel.

The Titan XD has taken on a unique position in the segment, placing it between the traditional full-size pickups and the light-duty half-ton (1500 series) trucks. This slightly scaled back sizing and capabilities makes it perfect for the families and businesses that need the extra capability, size and performance but without the massiveness and high prices of some of the really big trucks. 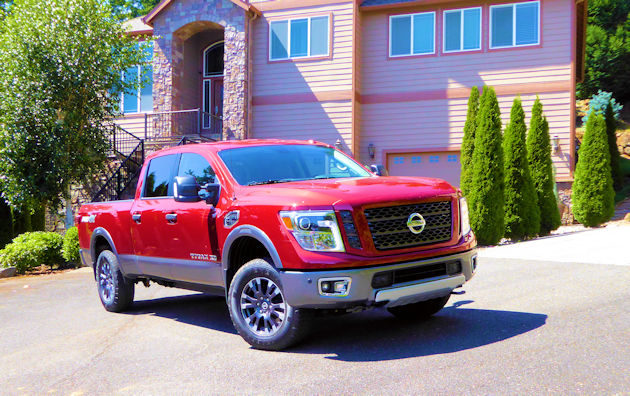 Fred Diaz, division vice president and general manager, North America Trucks and Light Commercial Vehicles, Nissan North America, Inc. explained it like this, ?The full-size truck market is the toughest market to crack in the entire industry, with so many outstanding products available.” He continued “This new Nissan Titan XD is designed to offer buyers something the others don’t ? combining outstanding towing and hauling capabilities?and?noteworthy fuel economy while towing and hauling. It also offers excellent ride comfort and handling, and the features and amenities that real working truck owners want.” 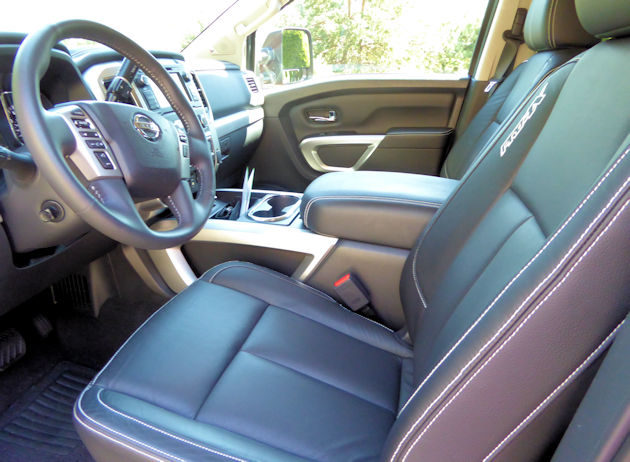 While we didn?t have a big trailer to pull around, it was obvious, even unloaded, that the Cummins diesel?s 555-lb.ft. of torque would pull a big load — up to 12,314 pounds. It has that strong torquey feel of a powerful diesel engine. While that might not compare with the loads some of the big three trucks are claiming, the average driver probably never needs much more than that unless he/she is pulling something like a big boat, horse trailer or camping trailer. It?s kind of a ?Three Bears? scenario with the Titan XD being ?just right.? 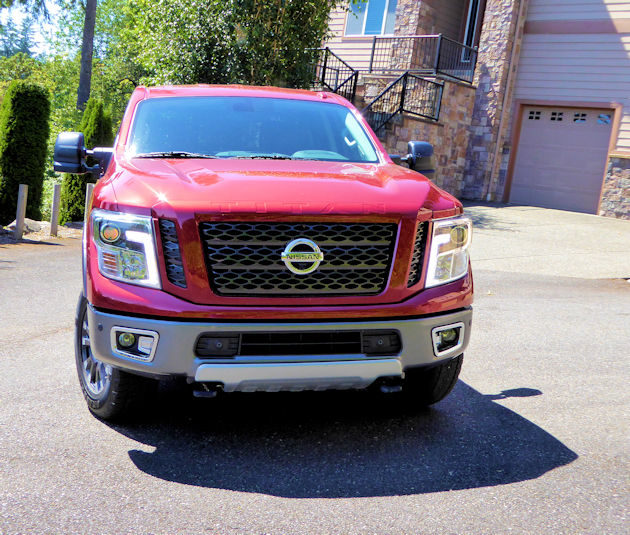 The Nissan Titan XD is available in three cab configurations, with two lengths (frame sizes), in three cab configurations and five trim levels. The truck was planned, designed and engineered at Nissan facilities in Tennessee, California, Michigan, Arizona and Mississippi. The final assembly takes place at the Nissan Factory in Canton, Miss. The Cummins? diesel is built in Indiana.

The Titan has a distinctive big truck look that from this critic?s perspective is better-looking than the competitors. I was impressed with the detail and quality workmanship of the trucks I drove. Especially noticeable was all the thought that went into the cargo area with well positioned lighting, tie downs and storage areas. The cargo area also has 12- and 120-volt electrical outlets.

Our test Titan XD diesel was the mid-level PRO-4x 4WD Crew Cab, which compares well with competitors with its rugged demeanor and appealing design. What most grabbed my attention was the attention to detail inside and out. The well-designed interior looks great and is comfortable both in the front and rear seats. All the control switches are organized by frequency of use. 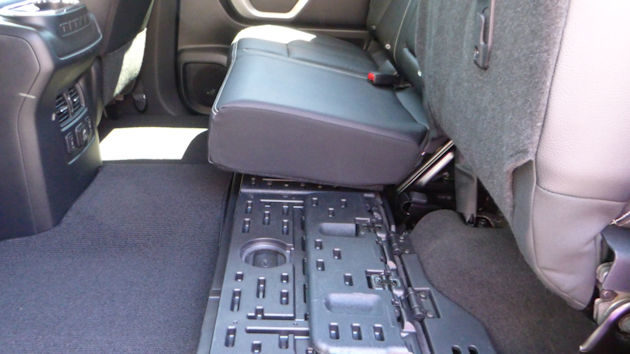 The interior is filled with storage compartments for drinks, valuables, laptop computers and other things people like to have with them. I especially like the locking storage area under the rear seat.

Owners who do tow, will appreciate the Integrated Trailer Brake Controller, Trailer Sway Control, transmission tow/haul mode with downhill speed control and a trailer light check system that allows one person to hookup the lights and check them. It also has an available RearView Monitor with Trailer Guides and Around View? Monitor to help the driver avoid obstacles in tight situations. The system has Moving Object Detection that watches out for other vehicles, shopping carts and other large objects.

The gasoline engine Titan XD is available in five trim levels: S, SV, SL, PRO-4x and Platinum Reserve. Prices range from $35,975, including the destination charge, for the Titan S 4×2 Crew Cab to $56,595 for the Platinum Reserve 4×4.

Diaz summarized the heavy duty pickup saying this, “Titan is about one thing ? getting the job done. While dimensionally the Titan XD will fit in most garages just like a light duty truck, it has the heart and soul of a heavy duty machine. Owners will never have to worry about having towing or hauling power in reserve ? without having to pay a serious price in terms of drivability or affordability.”

To learn more about the Nissan Titan XD, go online to http://www.nissanusa.com/trucks . 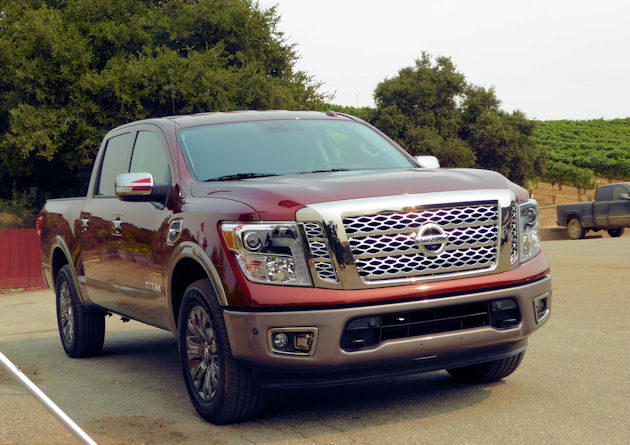 The half-ton pickup is the bread and butter vehicle of the auto industry and Nissan is making a strong assault on that market segment with the new Titan arriving at Nissan dealerships this summer.

The Titan half-ton has the same rugged looks and features as the Titan XD only in a slightly smaller size. The Crew Cab half-ton is about 14-inches shorter and the wheel base is about a foot less. The 2017 Nissan Titan is actually built on a completely different chassis than the XD, but does get the same powerful 390-hp 5.6-liter V-8 engine and seven-speed automatic transmission. The new engine and aerodynamic design helped to improve the fuel economy by 28 percent over the previous Titan up to 15 mpg city, 21 mpg highway and 19 mpg combined. The new engine also brings the maximum towing capacity up to 9,390 pounds which is the highest V-8 base grade tow capacity in the segment. 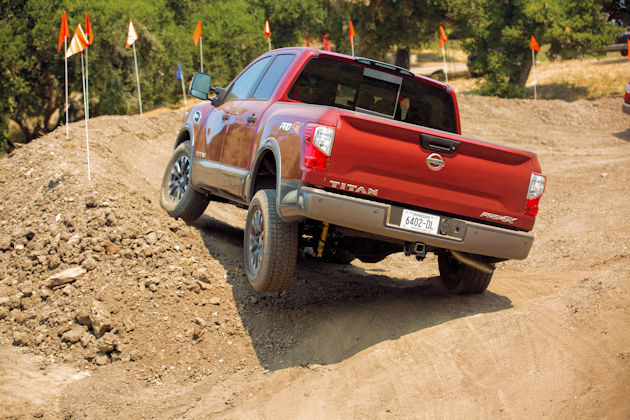 The Titan is designed to appeal to the typical mass market truck buyer who don?t need the extra heft of the XD version. The new Titans? are not only offered in the traditional crew and King Cab configurations, but also in a single cab ? the first in the Titan history.

The bold aerodynamic styling even includes active closing grill shutter to reduce drag when the radiator and condenser don?t need a large amount of airflow for cooling. The Titan design is fortified with category leading features like the available LED projector headlight, LED tail lamps and even LED puddle lamps.

After checking out the beautiful interior and appointments of our test truck at the Titan introduction in Carmel Valley, my driving partner and I headed out to try the on the highway. The initial impression is impressive, the truck has a sedan-like quiet interior, smooth ride and notable acceleration (I hear estimates of a 7.0 second 0 to 60 mph time.). If I were a truck guy, this is a pickup I could get excited about. It compares favorably or is better than the GM, Ford and Ram pickups. 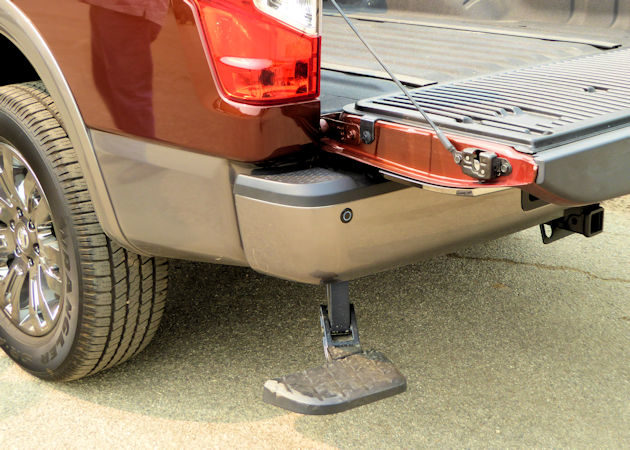 We even had a chance to try out the Titan on a couple of off-road courses, and it handled the undulation and traction challenges beautifully. It?s a very capable off-roader.
The Titan half-ton Crew Cab has one of the best designed cargo beds I?ve ever seen with its Utili-track? Bed Channel System — four heavy-duty cleats and bed floor and header tracks. It has available dual lockable in-bed storage boxes, which are easily removable to store tools or recreation toys. The box has an available spray-in liner, folding step, flush-mounted LED bedrail lighting, cargo and tailgate lamps, 120-volt plug in and a dampened and locking tailgate.

Inside the Titan pickup are the same Zero Gravity seats that Nissan uses in the sedan. And they are available with heating and cooling available in the front, and a choice of durable cloth or leather seating surfaces. The premium audio is a great Rockford Fosgate system with 12 speakers. 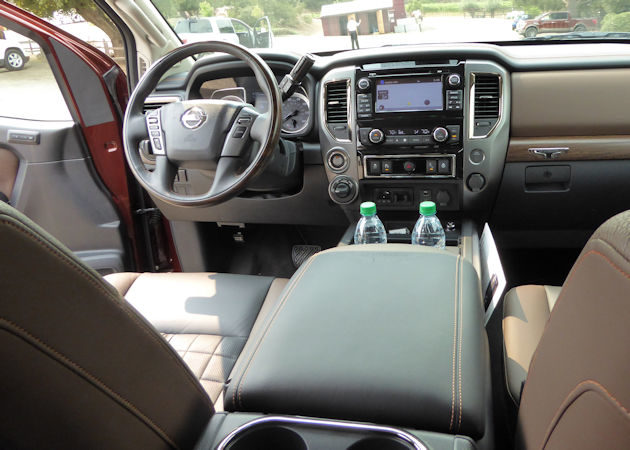 NissanConnect with navigation and a 7.0-inch color screen display the full complement of infotainment services along with Siri? Eyes Free, Nissan Voice Recognition for navigation and audio, Rear Cross Traffic Alert (RCTA) and RearView Monitor. The screen also displays the RearView Monitor with special guides for lineup tail hookups and the available Around View? monitor that gives the driver a ?bird?s eye? view of the surroundings. The system also has the Moving Object Detection system, including Blind Spot Warning, the handy Front and Rear Sonar System and Tire Pressure Monitoring. 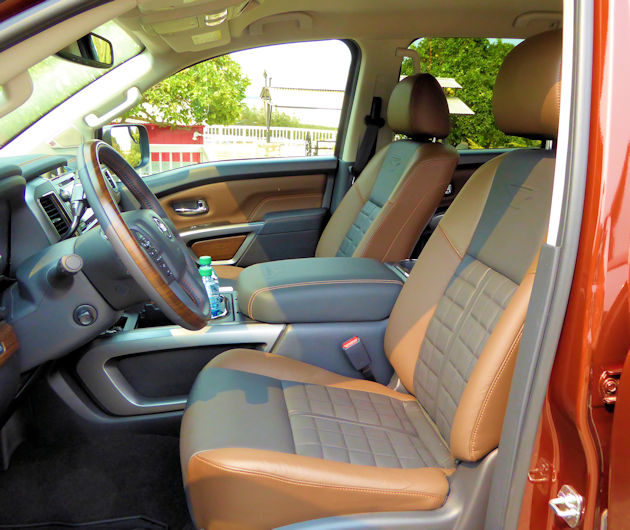 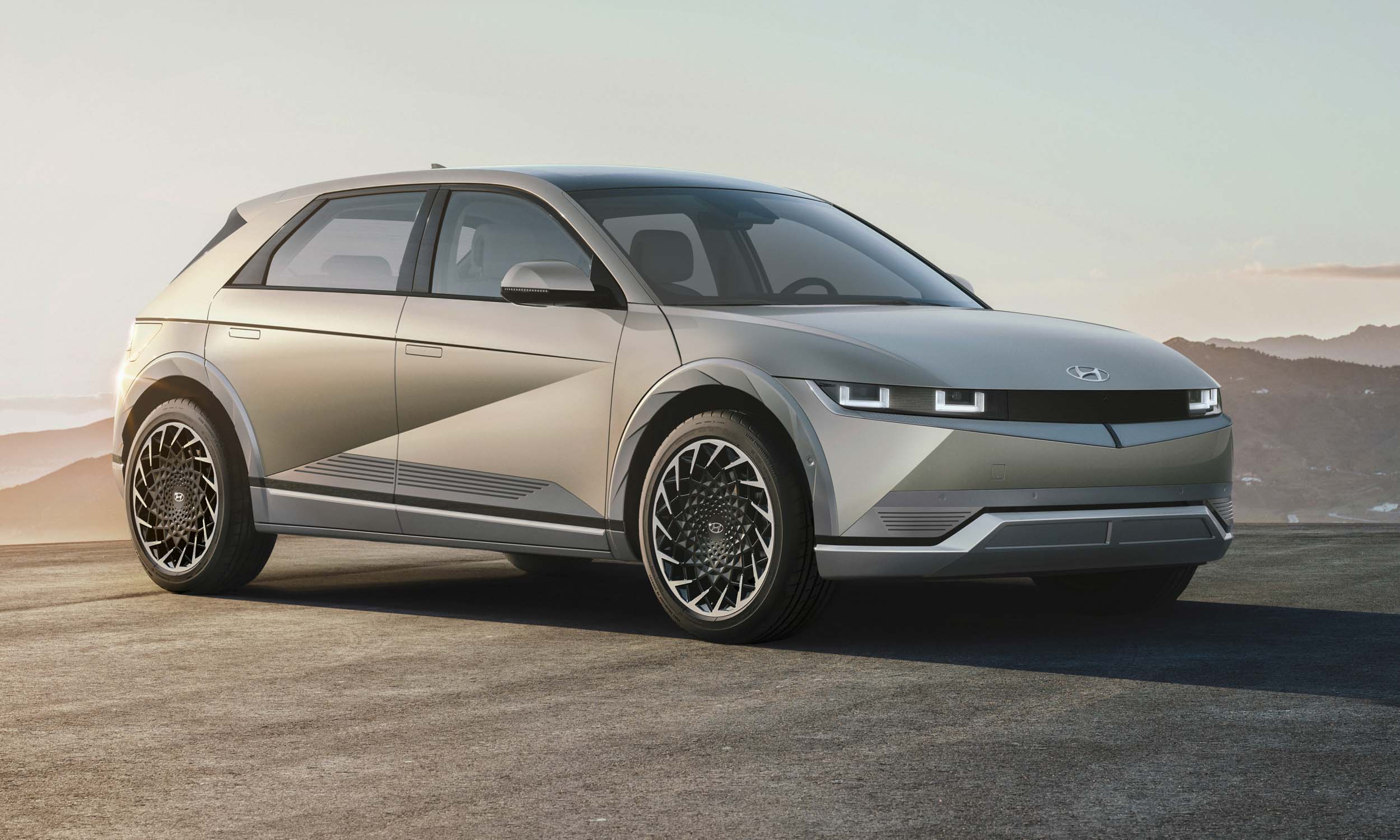