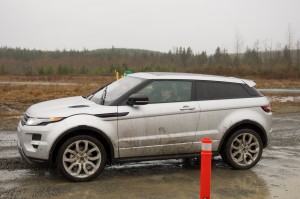 Here?s a list of the Luxury and Off-Road SUVs with basic information and our brief analysis of each with the Monroney price including options and destination charge along with the EPA city/highway estimated fuel economy: 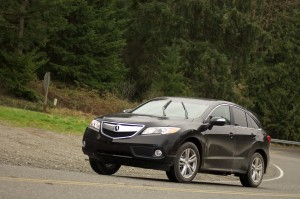 Acura MDX ($55,340 ? EPA 16/21 mpg) ? The Acura MDX is one of those vehicles that is hard to beat, offering a complete package of comfort, cool technical gadgetry and slick performance.? The MDX is also very driver friendly with intuitive controls, well placed.?? As much we like the MDX, it doesn?t jump out from the crowd.? The price is getting quite high, too, but when you count features, it offers one of the best values in the luxury group. 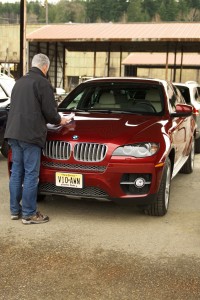 BMW X6 ($82,925 ? EPA 14/20 mpg) ? The BMW X6 maybe the ?Ultimate Driving Machine? of the luxury category, but we are turned off by the long list of options and the $83,000 price tag.? There is no arguing that the X6 has amazing performance on the roads, but it was not a stand out in the muck and mud of Mudfest.? Yes, it is sophisticated and attractive machine, but there are little things that distracted from it excellence.? It?s complicated to operate, not very fuel efficient, the back seat is difficult to get into plus there are little things like the lack of adjustable seat belt anchors that made it less than perfect in our minds. 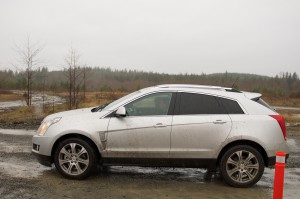 Cadillac SRX ($48,610 ? EPA 16/23 mpg) ? It?s hard to think of the sleek Cadillac SRX as an SUV; it looks more like a sexy concept. ?Never the less, it?s pretty impressive both on and off road.? It rides comfortably, has good power.? Plus everything, short of the rear entertainment system with dual screens, is standard. 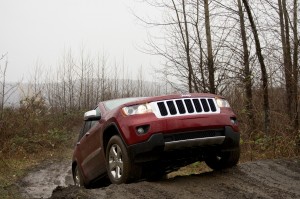 Jeep Grand Cherokee ($43,775 ? EPA 13/20 mpg) ? We love the look of the new Jeep Grand Cherokee and it?s also the most refined Jeep we?ve ever driven.? Jeep gives shoppers a broad choice with six variations and three engine choices when you count the 470-hp SRT8.? The new V-6 is notable, but the 5.7-liter Hemi V-8 is awesome, but expensive to operate.? Grand Cherokee is great on and off road. 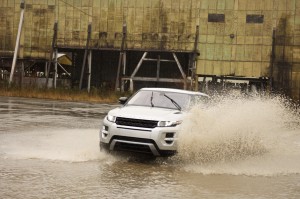 Land Rover Evoque ($56,745 ? EPA 18/28 mpg) — A favorite line from another British import, Monty Phython?s Flying Circus, was, ?and now for something completely different.?? And that?s exactly what the new Land Rover Evoque is — completely different.? The new sports car of SUVs has one-of-a-kind styling that is a real head turner everywhere you go.? Instead of the typical big Land Rover V-8 under the hood, the Evoque sports a powerplant derivative of Ford?s impressive four-cylinder EcoBoost.? The four-cylinder Evoque, rated at 240-hp, feels strong, produces a 6.7-second 0 to 60 mph time, and gets an EPA fuel economy rating of 18 mpg city and 28 mpg highway.?? The Evoque is as fun to drive as some sport sedan?s plus it?s pure Land Rover off road.? The impressive Evoque got our vote as the top luxury SUV, and it was top vote getter among the NWAPA journalists earning it the top Luxury spot and the top overall spot — 2012 Northwest Sport Utility Vehicle. 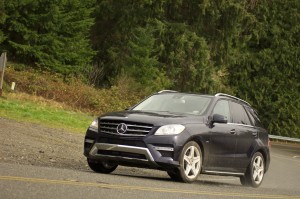 Mercedes-Benz M550 ($78,355 ? EPA 15/20 mpg) ? The all-new third generation Mercedes-Benz M-Class debuted last year and it?s a beautiful piece of machinery, from its distinctive styling to its silky smooth operation.? We?re big fans of the diesel version, but the new 4.6-liter twin turbo V-8 engine (402-hp) in the Mudfest entry was amazing. ?Of course, one of the downsides of incredible performance is fuel economy.? Fast, precise and comfortable, the Mercedes is impressive on- and off-road. 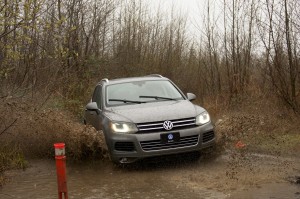 Volkswagen Touareg ($50,780 ? EPA 16/23 mpg) ? The Touareg may be one of the best-kept secrets of the luxury SUV category.? It is solid, well designed, comfortable and available in a range of V-6 engine options including the powerful gasoline V-6, a diesel V-6 and an awesome hybrid with a supercharged gasoline V-6.? The Touareg would definitely be on our SUV shopping list. 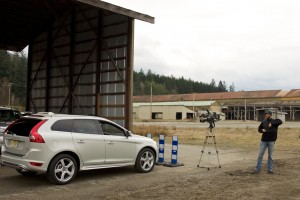 Volvo XC60 R-Design ($52,675 ? EPA 17/23 mpg) ? The Volvo XC60 often is stuck in the ?safety? niche because it probably is the safest SUV you can buy.? What the average consumer doesn?t understand is that the XC60 has outstanding performance, handling, and that like all other Volvos, has the most comfortable seats in the business. ?The only downside on the Volvo is a weak navigation system, and we think the Blind Spot Information System, which Volvo pioneered, should be standard equipment and not a $700 option.? This is easily one of our favorites. 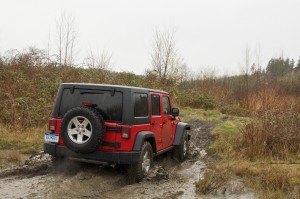 Jeep Wrangler Unlimited Rubicon ($38,550 ? EPA 16/20 mpg) ??? There is nothing like a Jeep Wrangler, and we especially like the practicality of the four-door Unlimited version.? For people who love going off-road, it doesn?t get much better than this.? It?s also something of a ?transformer? with the flexibility to strip off the top, doors and windshield making it into a totally different vehicle complete with massive roll cage.? The Wrangler used to be somewhat primitive on the highway, but the new version has very good performance thanks to the new V-6 engine and suspension changes. The Wrangler is an amazing value, too, when you consider the sophisticated equipment and performance.?? The Jeep Wrangler Unlimited gets the NWAPA node as the 2012 Northwest Off-Road vehicle of the year. 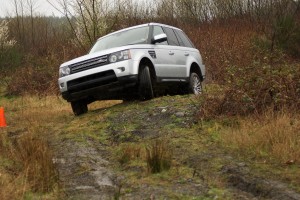 Land Rover Range Rover Sport ($67,695 ? EPA 13/18 mpg) ? To be fair, there should probably be another competition category just for Land Rover products.? These elegant off roaders are the best off road vehicles and among the top vehicles on-road.? In addition, they are loaded with opulent features and luxury.? Of course, they are among the most expensive, too which puts the judges in a perceived value quandary and that?s why we think they should be in a different category.? Land Rover products are successful because most of the models have powerful V-8 engines (up to 510-hp) and sophisticated drivetrains which are among the best in the business. ?On the downside, their fuel economy is some of the lowest, but if you can afford to buy one, you can probably afford to buy more gas too.? The other downside we find is their navigation system doesn?t provide the same level of performance as the vehicles.? They are a bit complicated to work, and tend to be slow to respond.?? But overall, the Land Rovers are in a category all by themselves. 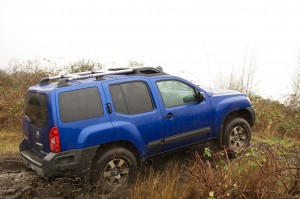 Nissan Xterra ($31,910 ? EPA 15/20 mpg) ? The Nissan Xtrerra probably comes closer to matching the Jeep Wrangler that any other SUV.? It?s rugged, well designed and impressive for both kinds of driving.