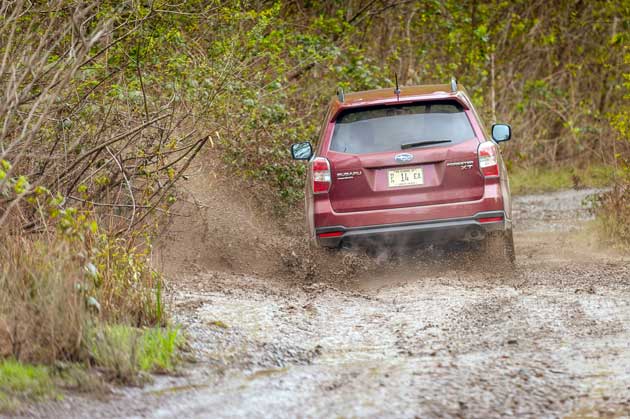 Snoqualmie, Wash. — Take 23 new SUV/Crossover vehicles; bring in 31 automotive journalists, 14 automotive manufacturer representatives and a dozen or so event support staff. Then add a hundred or so breakfasts, lunches and dinners, a cocktail party or two, a hotel sitting at the top of a waterfall and stir it altogether with a bit of rain at the DirtFish Rally School and you have the recipe for the 18th annual Mudfest.

Officially titled ?Mudfest ?13 ? Northwest Outdoor Activity Vehicle of the Year?, the annual event is cooked up by the North West Automotive Press Association (NWAPA) to select a vehicle we believe to be the best suited for northwestern families. 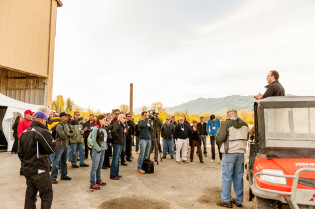 The vehicles were divided into five classes, Compact, Luxury Compact, Family, Luxury and Off-road, slicing the group into appropriate segments to determine sub winners and then choosing one to best represent the event title.

Here?s is our assessment of each of the participating vehicles, which we drove through a modified autocross style course, on county highways and through a specially prepared off-road course on the DirtFish Rally School property about 30 miles east of Seattle in the foothills of the Cascade Mountains. Each vehicle is listed with its base price, horsepower, price as tested and EPA fuel economy numbers.

If you missed Mudfest Part 1, go to https://ourautoexpert.com/mudfest-13/ 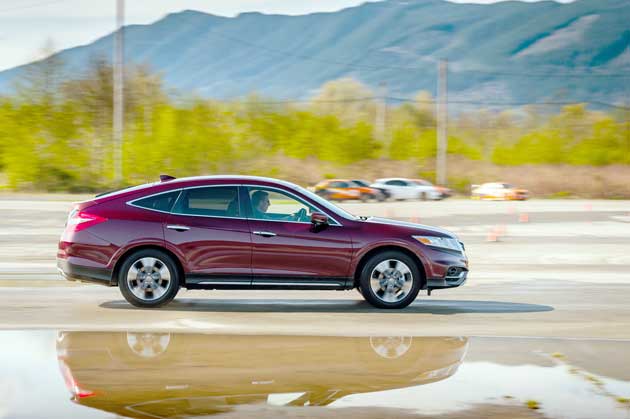 Honda Crosstour EX-L Navi V-6 ? With its sleek GT or four-door coupe roofline, Mudfest seems like an unexpected venue for the 2013 Honda Crosstour. The dramatic styling and utilitarian interior makes the Crosstour my favorite Honda model (Bill). It was also ranked third in the 2013 J.D. Power and Associates list of most dependable crossovers.

The Crosstour did very well in the on road segments of the competition, especially considering it size. It?s 197 inches long and weighs two tons. The EX-L V-6 model is full featured with all the luxury treatments including leather, a long list of safety equipment and navigation all standard. It also seemed to handle the mucky track with no problems.

Pricing for this top-of-the-line 2013 Honda Crosstour 4WD EX-L V-6 model is $37,090 including the destination charge. There are no options available other than colors. 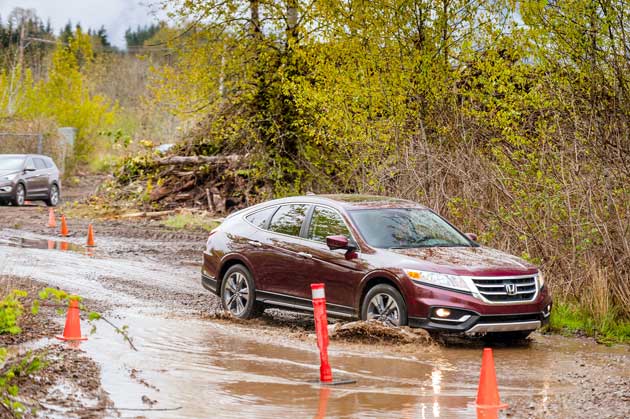 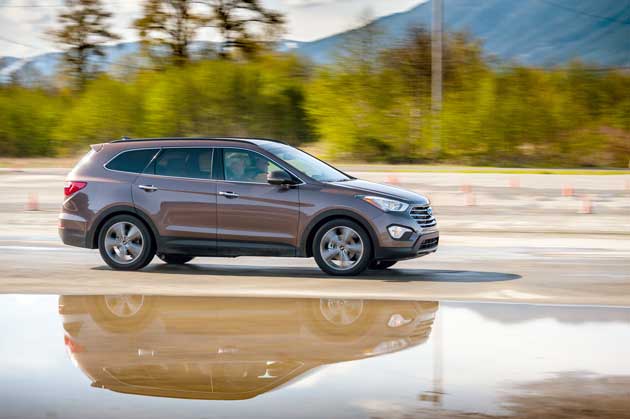 Hyundai Santa Fe Limited AWD ? The big brother to the Santa Fe Sport, the Hyundai Santa Fe is 8.5 inches longer and has three rows of seating. We were impressed by the high level of fit and finish and the features. The Santa Fe also gets high marks for interior comfort, quiet and technology.

It did very well on the on-road sections of the competition and even wallowing through the mud, but it didn?t have quite the precision and agility we experienced in the smaller Santa Fe Sport.

A 290-hp, 3.3-liter direct injection V-6 powers the Santa Fe. The only available transmission is a six-speed automatic with Shiftronic manual shifting mode. The all-wheel drive is an active system that quickly transfers power to the tires with the best traction, plus it has a switch to lockup all four wheels for even better traction when needed. Fuel economy is rated at 18 mpg city, 24 mpg highway and 20 mpg combined.

The 2013 Hyundai Santa Fe Limited AWD has a base price of $34,850. The addition of the technology packages and destination charge takes the price as tested to $38,730. 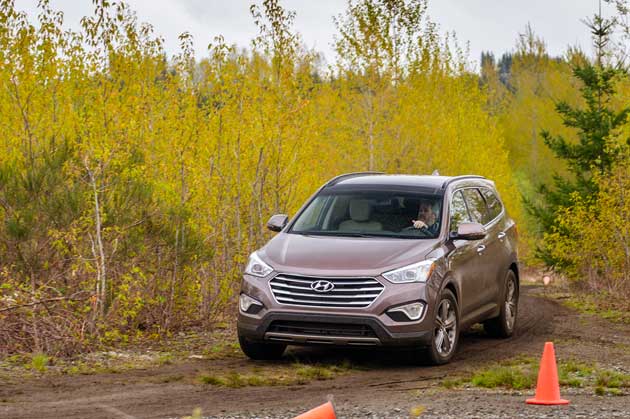 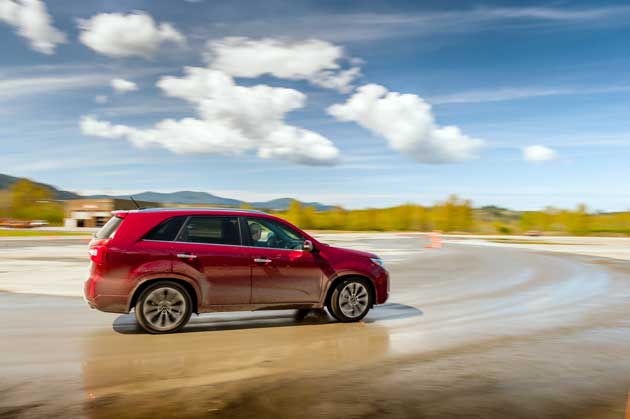 Kia Sorento SX AWD ? First cousin to the Hyundai Santa Fe, the Kia Sorento SX AWD is very comparable with the same drivetrain application and high level of features and specs.The two look very different both inside and outside, however.

The Sorento does have the latest application of Kia?s UVO telematics services that are powered through a Bluetooth connection with your smartphone. UVO aids navigation, enhances entertainment, assists with trip planning, gets help in an emergency and aids the owner keeping on top of maintenance issues. The system is intuitive and compares favorably or is better than many of the big name systems .

The Kia Sorento feels luxurious and quiet both on- and off-road and is exceptionally comfortable. Fuel economy is listed at 18 mpg city, 24 mpg highway and 20 mpg combined.

The price of our test vehicle was $36,700 and included many features like the UVO, navigation, blind spot detection, power liftgate and panoramic sunroof as standard equipment. The only option on the Sorento SX was the third row seating, which adds $1,000. With the option and destination charge, the 2014 Kia Sorento SX AWD price is $38,550. 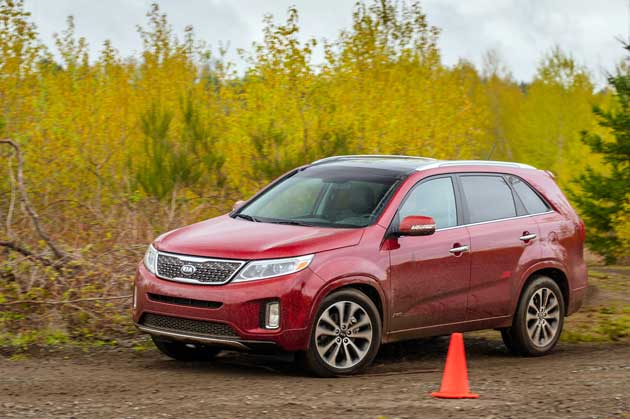 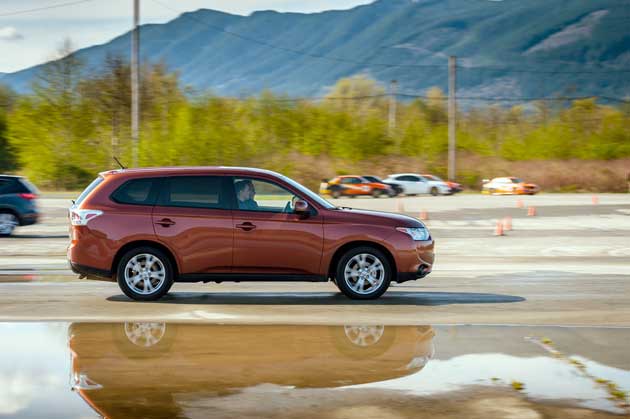 Mitsubishi Outlander ES S-WAC ? The Outlander is the first new vehicle on Mitsubishi?s comeback trail and it hints that the company is making some good decisions. New aerodynamic styling on the outside and a sophisticated, driver-oriented cockpit give the Outlander a fresh mature styling that should attract shoppers.

The 2014 Mitsubishi SE with their four-wheel drive, which they call Super-All Wheel Control (S-AWC) and the Touring package includes an extensive list of features including navigation, Adaptive Cruise Control, Forward Collision Mitigation, Lane Departure Warning, Leather seating and many other features usually only found on higher end vehicles.

Under the 2014 Mitsubishi Outlander?s hood is a 166-hp, 2.4-liter MIVEC four-cylinder engine driving a Continuously Variable Transmission (CVT) and the S-AWC. Performance is nothing to write home about, but the top model, the GT gets a 224-hp, 3.0-liter V-6, which should be much more impressive.

Outlander fuel economy was one of the best in Mudfest, 24 mpg city, 29 mpg highway and 26 mpg combined. The 2014 Outlander SE S-AWC w/Touring has a sticker price of $32,720 including the destination charge. When you consider the features, the Outlander is one of the best Mudfest values. 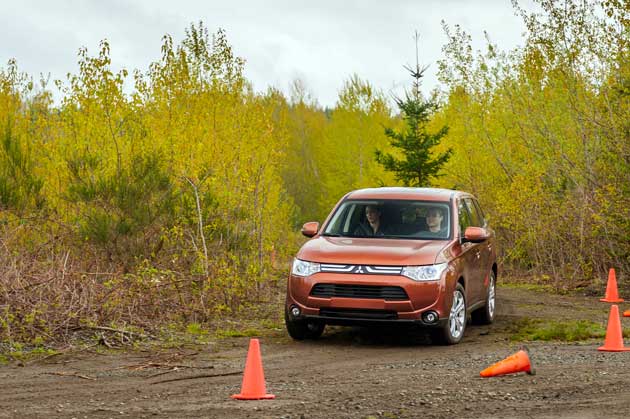 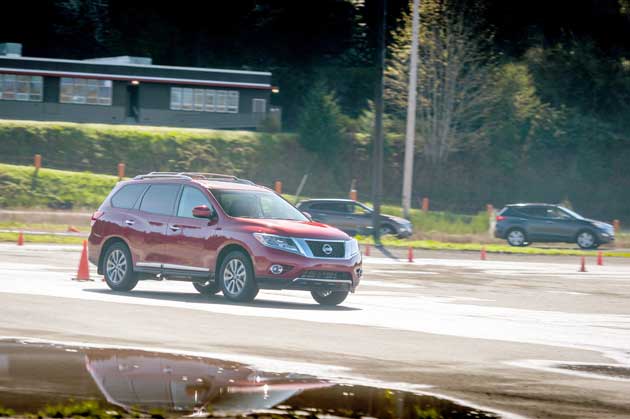 Nissan Pathfinder SL ? We?re guessing Nissan didn?t have a four-wheel drive version of the Pathfinder in the area that could be used for the Mudfest competition. The vehicle used was a prototype vehicle and those are usually not quite up to the same level as a production model.

However, it didn?t seem to have any impact on how well the 2013 Nissan Pathfinder handled or preformed on- or off-road. It certainly would have done better with Nissan?s sophisticated 4WD system that allows the driver to select from 2WD, 4WD or automatic?it?s the only SUV in the category to offer that feature.

The Pathfinder is all-new this year, and even in its prototype stage, it was an impressive combination of styling and performance.

The 2013 Nissan Pathfinder SL we drove was powered by Nissan?s award winning 260-hp V-6 engine with their excellent CVT transmission. The Pathfinder has an EPA fuel economy rating of 19 mpg city, 25 mpg highway and 21 mpg combined. The Mudfest vehicle was priced at $34,470. An optional trailer towing package and destination charged bumped the price to $35,650. 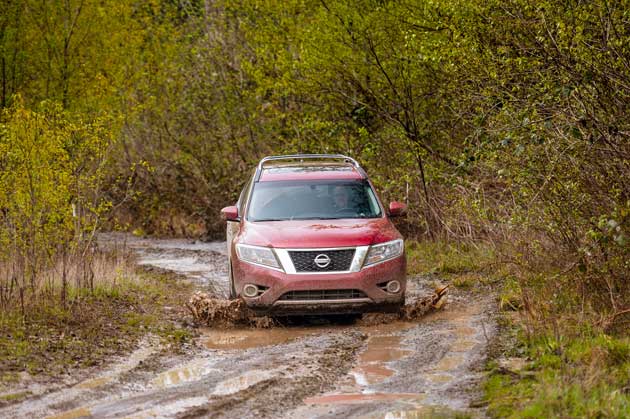 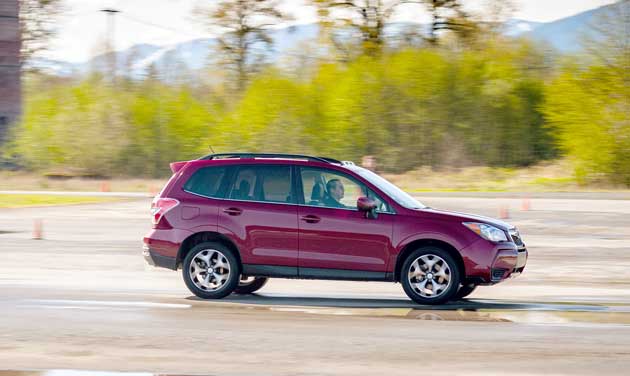 Subaru Forester 2.0XT Premium CVT ? Another all-new model this year is the Subaru Forester. The Forester, now in the fourth generation, has never failed to impress us, and this year, as you would expect, it?s better than ever. As advocates of turbocharging, the XT version has always been our favorite. This year the turbocharged 2.0-liter Boxer four-cylinder engine gets a nice horsepower boost from 224 to 250 hp. The standard transmission is a new six-speed manual, replacing the previous five-speed. The automatic transmission has been changed from a four-speed automatic to a CVT and it emulates a six-speed in the automatic mode and eight-speed when manually shifting with the steering wheel mounted shift paddles.

The Forester was one of our favorites in the Family class because of its good performance, agile handling and high value. NWAPA members also picked the 2014 Subaru Forester 2.0XT as Best Family Class Outdoor Activity Vehicle of the Year.

Fuel economy is rated at 23 mpg city, 28 mpg highway and 25 mpg combined. The 2014 Subaru Forester 2.0XT Premium CVT with its long list of standard equipment including features like navigation, panoramic moonroof, is priced at $28,820, including the destination charges. 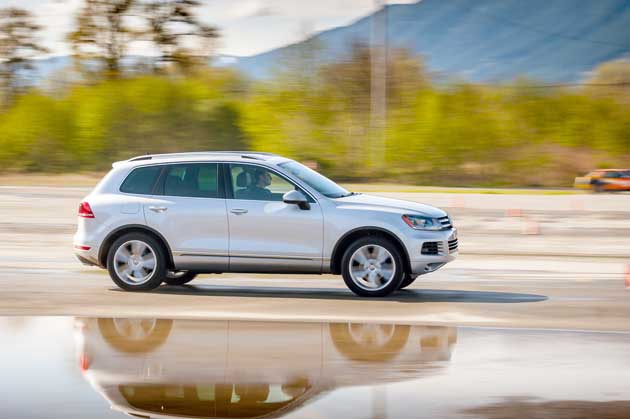 Volkswagen Touareg TDI Executive ? Over the years, we?ve become big fans of diesel vehicles. The new diesels are quiet, powerful and the fuel economy is much better than gas engines. As a result we both picked the Volkswagen Touareg diesel as one of our favorites in the Mudfest Family Class.

The Touareg TDI probably should be in the Luxury Class, but Volkswagen entered a Touareg Hybrid in that class and it makes no sense to compete against yourself.

The 2013 Volkswagen Touareg TDI Executive is fully equipped with features from navigations and leather seats to bi-Xenon headlights and panoramic sunroof and everything between. The price for the works, including a couple minor accessories and the destination charge is $60,840. 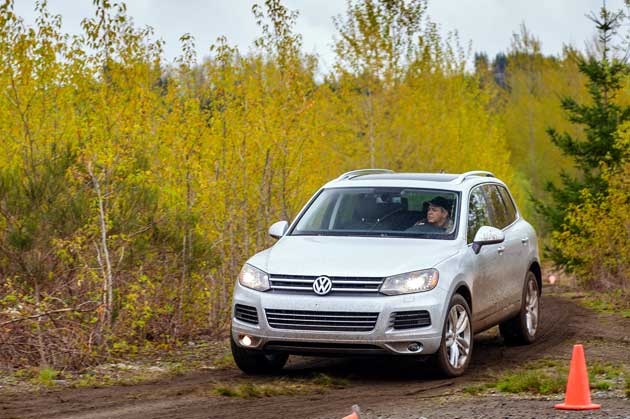 and announce the Northwest Outdoor Activity Vehicle of the Year.

If you missed Mudfest Part One it is available at https://ourautoexpert.com/mudfest-13/ 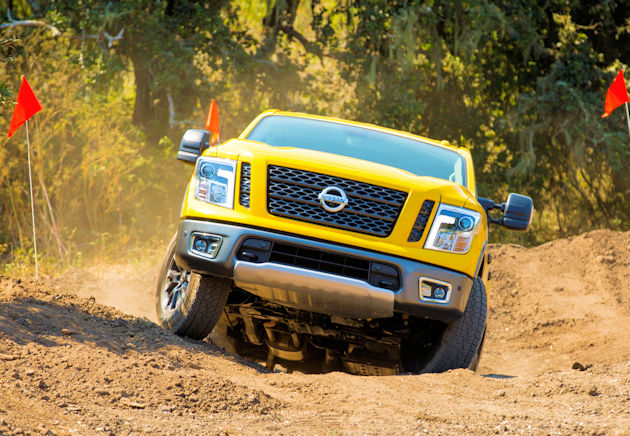 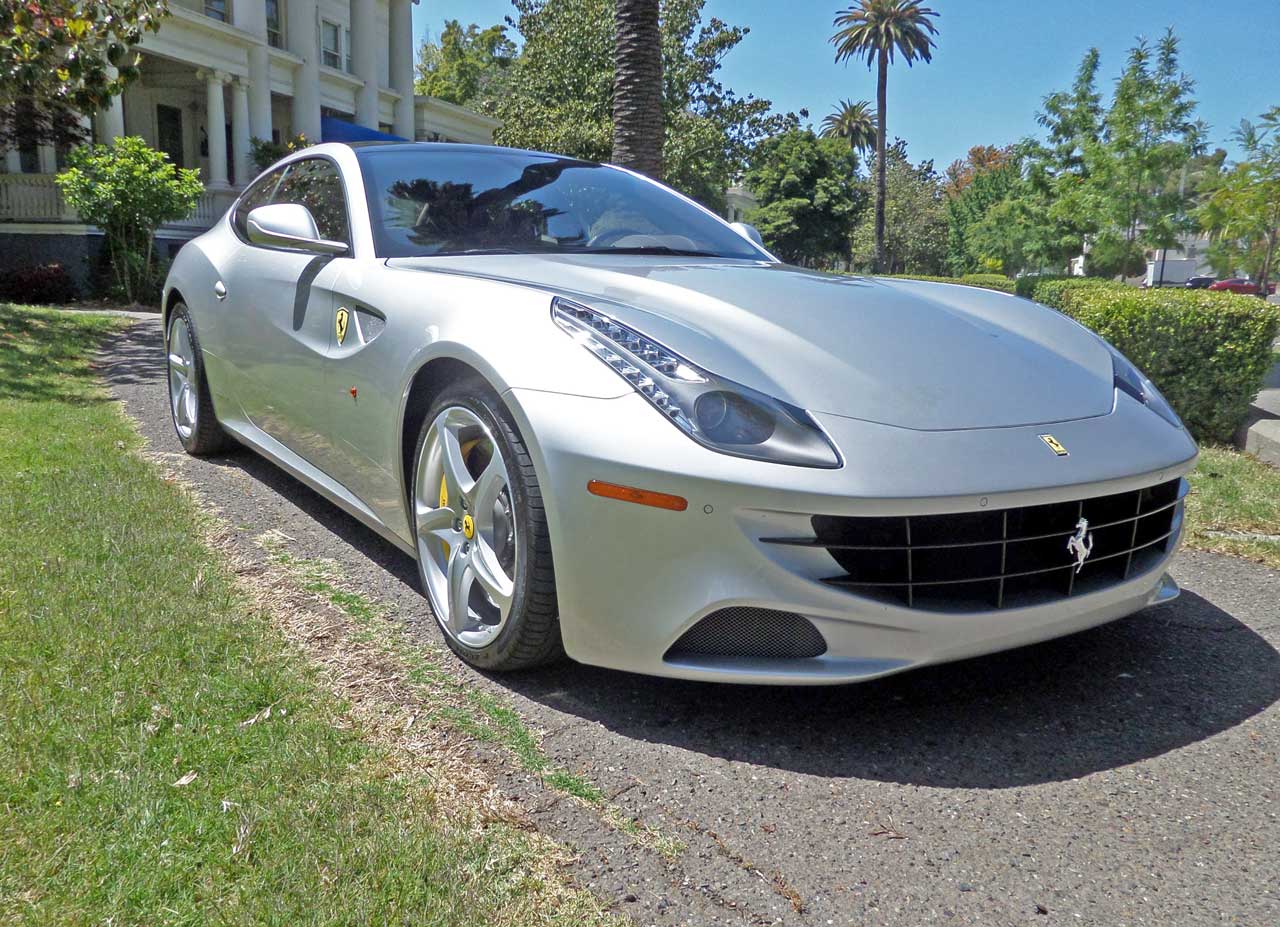