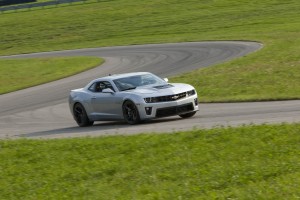 Chevy engineers have finalized the numbers for the upcoming ZL1 super Camaro at 580 horsepower and 556-lb.ft. of torque making it the most-powerful production Camaro ever.

Insuring the supercharged 6.2-liter engine Camaro will be will handle the power, the ZL1 is outfitted by advanced powertrain and chassis technologies, including exclusive Performance Traction Management and third-generation Magnetic Ride Control.

?The Camaro ZL1 also features exclusive chassis and traction technologies,? Oppenheiser said, ?to offer the best of all worlds ? including balanced handling for the track, acceleration for a drag strip, and the comfort of a daily driver.?

The ZL1 will be offered with either a six-speed manual or automatic transmission. The Tremec TR-6060 ?MG9? manual features 30 percent more torque capacity than in the Camaro SS. The higher torque capacity results from a strengthened output shaft, high-strength rear housing, and additional roller bearing. The MG9 has also been tuned for improved shift feel, with a dual-mass flywheel, twin-disc clutch, and triple synchros for smooth, precise shifts. 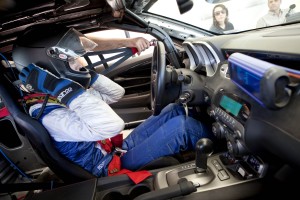 Other track-ready features of the ZL1 include:

The Camaro ZL1 will feature the third-generation of Magnetic Ride Control (MRC) which can adjust the damping 1,000 times per second.

MRC employs valve-less damping and Magneto-Rheological (MR) fluid technology. MR fluid is a suspension of iron particles in a synthetic fluid. When the system is activated, the particles are magnetized and aligned into fibrous structures, changing flow resistance. By controlling the current to an electromagnetic coil inside the piston of the damper, the system varies the suspension firmness to match the road and driving conditions.

?Traditional suspension systems at some point compromise ride quality for road-holding grip and body control,? said Oppenheiser. ?With Magnetic Ride Control, we can offer customers the best of both worlds: A comfortable ride that makes the ZL1 appropriate as a daily driver and the incredibly precise body control that makes the ZL1 so enjoyable on the track.?

The new design allows even more precise control of the electrical current (and magnetic flux), allowing greater range between the softest setting for ride comfort and the firmest setting for track driving. The new dual-coil design also enables faster response, with damping levels now adjusted up to 1,000 times per second ? about one adjustment per inch of vehicle travel at 60 mph ? making the system exceptionally responsive to changing driving and road conditions.

There are three settings for MRC in the ZL1: Tour, Sport, and Track.

The Camaro ZL1 will also offer Performance Traction Management (PTM) as standard equipment, which is exclusive to General Motors. First introduced on the Corvette ZR1, PTM is an advanced system that integrates magnetic ride control, launch control, traction control and electronic stability control, to enhance performance on the racetrack and drag strip.

For example, the launch control feature (manual transmission only) automatically modulates engine torque for the best possible acceleration without excessive wheel spin. When the driver pushes the throttle to the floor, the system holds a predetermined engine speed until the driver releases the clutch. Then, the system modulates engine torque 100 times per second to maximize the available traction. The system is capable of approaching a skilled driver?s best effort and repeats it consistently.

Similarly, on a road course, the driver can apply full throttle when exiting a corner and PTM will automatically manage acceleration dynamics to maximize exit speed based on available traction.

Five PTM performance levels or modes are available to accommodate the given ambient and track conditions, driver experience/vehicle familiarity and driver comfort levels.

?Like the Magnetic Ride Control, the Performance Traction Management system improves the ZL1 experience as a daily driver and on the track,? said Oppenheiser. ?By offering five distinct modes of traction management, the driver can select what?s best for them based on their experience and the driving conditions. As a result, novice drivers will find the ZL1 is very enjoyable to drive, while expert drivers will find PTM supplements their driving skill without interfering with their intentions.?