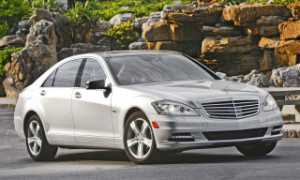 ?Mercedes-Benz is considering making its flagship S-Class sedan exclusively a hybrid model according to Automotive News.? The controversial plan would help the luxury brand meet global fuel-economy and emission standards.? It would also none of the S-Class models, including the high performance AMG versions, would be only gasoline powered.? The Mercedes hybrid system is a full hybrid system using lithium batteries.? Full hybrids are capable of driving on electric power only for short distances.? If the plan is approved it would take effect for the next generation, which is due in 2013 in Europe and a year later in North America. ?A decision is expected by early this summer.