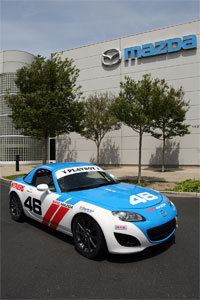 When admiration is mutual, and partnerships are made among good friends, it?s easy to make fun things happen quickly.? In this case, what’s happening is a fantastic reunion of a classic racing team. Racing legends Peter Brock and John Morton will fly their famous #46 red, white, and blue pattern on a classic Japanese roadster at Road Atlanta later this month.

Peter Brock was the driving force behind Brock Racing Enterprises, aka BRE. In the 1970s, BRE was famous for Trans-Am successes driving the hot Nissan sports cars of the day – the Datsun “Fairlady” Roadsters, Datsun 510 and Datsun 240Z.? The difference this time is that the new car will be a current model, and it will be the most popular roadster ever sold or raced: the Mazda MX-5 Miata.

?It?s been some 37 years since a factory supported car in BRE livery sat on a racing grid.? Seeing the new MX-5 in our traditional colors almost brings tears to my eyes. It?s wonderful that Mazda, a company that really loves, understands and supports racing of all kinds, has seen fit to honor our team?s great racing history with this new spirit of competition,? Brock says.

For many years, the annual Walter Mitty Challenge has been a favorite vintage race weekend on the East Coast.? Mazda teamed up to sponsor the event with Classic Motorsports/Grassroots Motorsports and HSR in 2006.? To add a dash of the new and modern, Mazda brought its popular SCCA Pro Racing Playboy MX-5 Cup series to the vintage race weekend.

Each year, a racing legend is honored at the Mitty — for 2010, that honored legend is Peter Brock.? At this point, it?s not clear if the idea came from Mazda, from Classic Motorsports, HSR, a BRE fan, or elsewhere, but someone simply said, ?Wouldn?t it be cool to have a BRE MX-5 in the Playboy race to honor Pete??

“Mazda is a team of enthusiasts.? Long before we began working behind the scenes for Mazda, we were race fans.? We love the sport and the heritage.? This opportunity to pay tribute to Pete, John, and the BRE team is something we did out of respect, with knowledge that there are others like us who appreciate the blending of heritage and modern sport,”? says Robert Davis, Senior Vice President, Mazda North American Operations.

With Mazda, good ideas can turn into reality with a few quick phone calls.? The Mazda design team sketched up a proper BRE graphics job for the MX-5.? The MAZDASPEED team called John Morton to verify his interest.? Since John had also scored more than a few race wins with Mazda during his career, that connection was strong, and his desire to race remains strong.

?This Walter Mitty weekend is very special for me because it is bringing together so many facets that were significant in my racing career.? First is the reunion and recognition of our championship winning BRE team that Peter Brock developed in the late sixties and that led me to two SCCA National Championships and two 2.5 Trans-Am Championships in the early seventies.? Second is the opportunity Mazda has given me to race in a professional race in my sixth decade of competition.? Twenty-six years ago I shared the BFG-sponsored, class winning Mazda Lola at Le Mans which was the beginning of a long relationship with both companies.? The Mazda Miata MX-5 I will be racing at the Mitty, the only real modern sports car in mass production, is a reincarnation of the cars that started this sport in America in the late forties,? Morton said.

Finally, Pete and Gayle Brock were shown the sketch and pitched the idea.? Of course everyone said yes. We think you’ll agree that this is one of the best-looking race cars to be unveiled in the last few years.