The Lotus Elise revolutionized the sports car market 14 years ago when the small, lightweight and agile 2-seat mid-engine sports car was introduced. By ensuring that the Elise stuck rigidly to Lotus? core values of performance through light weight, the Elise was able to produce supercar performance with city car economy and for the 2011 model year, Lotus has introduced a number of changes and improvements to maintain the class leading position of the Elise.

The new 2011 Elise range will enter the US and Canadian markets in the late summer of 2010.

The 2011 Elise range for the US and Canadian markets will consist of the following versions:

Key updates and improvements across the 2011 Lotus Elise line:

The Lotus Elise is built around the revolutionary and award winning extruded and bonded aluminum chassis, with a lightweight steel rear subframe. The chassis weighs just 150 lbs. and has a torsional rigidity of 9,800 Nm per degree, giving a high level of precise control of the suspension tuning. At the rear, and also acting as a rear energy absorbing crash structure, a lightweight steel subframe carries the engine and gearbox. At the front, the radiator and key ancillaries are mounted into a high tech composite energy absorbing crash structure that is lightweight, compact, and over three times more energy absorbing than the equivalent steel structure.

The Elise body ? an evolution

The body of the new 2011 Elise is an evolution of the iconic Elise design, retaining the character and style, while offering a more planted, purposeful stance and a pure, contemporary look that links it to the Evora.

The new Elise body has a new front end, including a new bumper, front clam and access panel that combine to give the Elise a wider, more planted stance on the road.

At the rear of the car the mid-engine compartment has been encased by a new, distinctive ?twin-spine? engine cover while lower down on the back of the Elise a more aggressive diffuser is tightly wrapped by an elegant new bumper design that now includes the rear license plate.

The theme of purity is carried through to the cooling apertures that are efficiently finished with a new lightweight aluminium mesh that gives the car a classically sporting character.

With the sleek new body, the 2011 Elise?s aerodynamics have improved with a four percent reduction in the coefficient of drag (Cd).

Power for the Elise is delivered through the high-tech and reliable 2ZZ-GE 1.8-liter fourcylinder, 16-valve engine with Intelligent Variable Valve Timing (VVT-i) from Toyota. Selected for the Elise because of its compact size, light weight and high output, the Lotus-tuned engine is rated at 189 peak horsepower at 7,800 rpm, delivering 133 ft.- lbs. of torque at 6,800 rpm. VVT-i technology allows the engine increased low-end torque for better acceleration from a standstill while also enhancing high-speed performance.

The job of getting power to the ground falls to the smooth-shifting, all-aluminum C64 six-speed manual gearbox, also sourced from Toyota. Lotus engineers designed an ultra precise shift linkage mechanism for fast, positive gear shifts, transforming the transmission into the perfect tool for harnessing every ounce of the Elise?s performance potential. 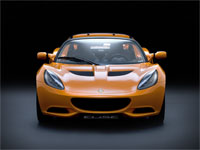 The 2011 Elise SC has a power increase over the standard Elise from 189hp to 218hp (15%) and torque increase from 133 ft.-lbs. to 156 ft.-lbs. (17%) via an Eaton rotor pack non-intercooled supercharger designed especially for the Elise. The Lotus-designed, Magnuson-produced supercharger is joined to the intake manifold plenum as part of a single-piece casting. Combined with the absence of an intercooler and its associated pipework, this integrated supercharger/intake manifold assembly contributes to a 17.6 lbs. reduction in engine weight compared to the Exige S and no compromise to rear view mirror visibility which is masked by the current intercooler
installation on the Exige S.

In keeping with its role as a supremely fast road car rather than extreme track machine, throttle response is very progressive but also very direct, resulting in a measured, refined driving experience. As you might expect of a car with 218hp and weighing only about a ton, the performance of the 2011 Elise SC is astonishing with 0-60 mph acceleration time in the mid four second range.

Both the naturally-aspirated Elise and the Elise SC?s supercharged engine are completely controlled by Lotus? own bespoke T6 Engine Management Control System.

The Lotus Elise is one of the lightest fully homologated sports cars in the world. This low weight translates into efficient performance with minimal environmental impact in terms of emissions and fuel consumption. The efficiency of the Elise structure means that the 189 hp in Elise form or 218 hp in the Elise SC delivers phenomenal performance.

The Elise has high performance AP Racing calipers at the front and Brembo calipers at the rear linked to 11.1? (282 mm) vented and cross-drilled cast iron discs to give excellent stopping power.

The Elise comes as standard with a track tuned ABS system that is designed to be unobtrusive under normal driving conditions. This system is designed to be used on track and has a high threshold, only intervening in emergencies. The ABS system is linked to a lightweight pedal box with steel pedal arms and extruded aluminium pads.

Introduced for 2006 Model Year Lotus Exige and Elise cars, ProBax seats are designed by Lotus and specifically adapted and developed by NuBax. ProBax seats help to significantly improve the postural position of the occupant?s spine while seated compared to similar seat shells without ProBax technology. This not only results in an improved level of comfort, but also has significant medical benefits – maintaining a natural curvature
of the spine, and markedly improving the body?s blood flow. Increased blood flow has been shown to enhance response times, raise alertness levels and reduce the onset of muscle fatigue. Tests on Lotus seats, with the new ProBax technology, have shown an improvement in blood flow of up to thirty per cent over the pre-2006 Model Year Lotus seat.