Lincoln is showing and introducing some serious indications of the rebirth of the upscale brand with two models showing the technological and performance enhancements..

?If you want to?drive?the future of Lincoln, there?s the new MKS and MKT coming this spring. They signal the direction Lincoln is heading when it comes to delivering a refined and engaging driving experience.? said Scott Tobin,?director, Lincoln Product Development.

??????????? The 2013 Lincoln MKS luxury sedan will feature Drive Control, an automatic system that is designed to balance smooth ride with confident handling by responding to the driver?s commands and the road itself.? Lincoln Drive Control enables drivers to purposefully change the on-road personality of the MKS. Moving the gear selector from Drive to Sport automatically shifts handling performance, ride firmness, throttle response, shift schedule, steering response and traction control/electronic stability control parameters. Drivers can further personalize the Continuously Controlled Damping (CCD) suspension settings, including selecting the smoother-riding Comfort setting, using MyLincoln Touch?.? The MKS will be the only car in its segment to off an active damping system as standard equipment. 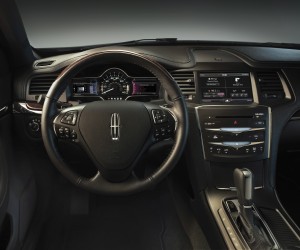 The 2013 MKT luxury crossover has most of the same improvements as the MKS, plus Lincoln Drive Control, CCD and inflatable second-row outboard safety belts which reduce pressure on the chest during an accident while helping to control head and neck motion and helping reduce the risk of injuries.

The MKT also has a new AdvanceTrac??with RSC??Roll Stability Control? and Curve Control helps drivers maintain control in the MKT when taking a curve too quickly.

Both the MKT and MKS will arrive at Lincoln dealerships in Spring 2012.