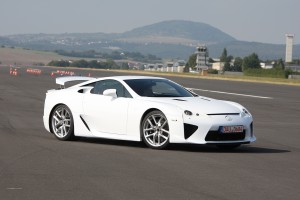 If you were saving all your change to buy the upcoming Lexus LFA supercar, you are too late.? Toyota announced today that all 500 copies of the LFA were spoken for.? The company plans to build 20 of the 552-hp two- seaters per month for two years.

With a base price of $375,000 base price, plus destination charges, the number of buyers was limited, but it only took a couple of months to fill the production schedule.? Toyota is mum on where the cars were sold, but they did say one-third of the European orders came from Germany, where buyers have already made down payments of $125,715.

LFA, the flagship for the F portfolio of Lexus performance models is the fastest Lexus production car ever built and delivers world-class design, performance, and cutting-edge technology.? The LFA is only available as a two-year lease with the intent to purchase.??Toyota is using the lease restriction in an effort to control speculators who would try to buy the car and then resell it at a higher price. 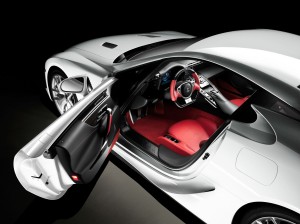 All LFAs will be hand-built to customer specifications and production will begin December 2010.
The Lexus LFA is powered by a sophisticated new high-revving 4.8-liter V10 engine that generates 552 horsepower at 8,700 rpm and 354 lb.-ft. of peak torque at 6,800 rpm.? The engine is mated to a unique six-speed Automated Sequential Gearbox (ASG) with paddle shifters that enables ultra-quick gear shifts (0.2 seconds) with four driving modes ? AUTO, SPORT, NORMAL and WET for exceptional versatility. 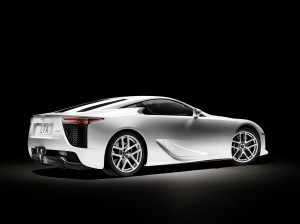 Lexus? supercar accelerates from 0 to 60 in 3.6 seconds and achieves a maximum speed of 202 mph thanks to an independently controlled throttle body for each cylinder, high-volume 12-hole injectors, dual Variable Valve Timing with intelligence (VVT-i), low-friction engine components, and equal length exhaust manifolds.

The LFA uses an advanced Carbon Fiber Reinforced Plastic (CFRP) construction for its chassis and bodywork to create a light, strong and impact-resistant structure.?The suspension is a track-tuned lightweight aluminum alloy.? The brakes are six-piston front and four-piston rear calipers with Carbon Ceramic Material (CCM) brake rotors and it has a specially calibrated Vehicle Dynamics Integrated Management (VDIM) system.