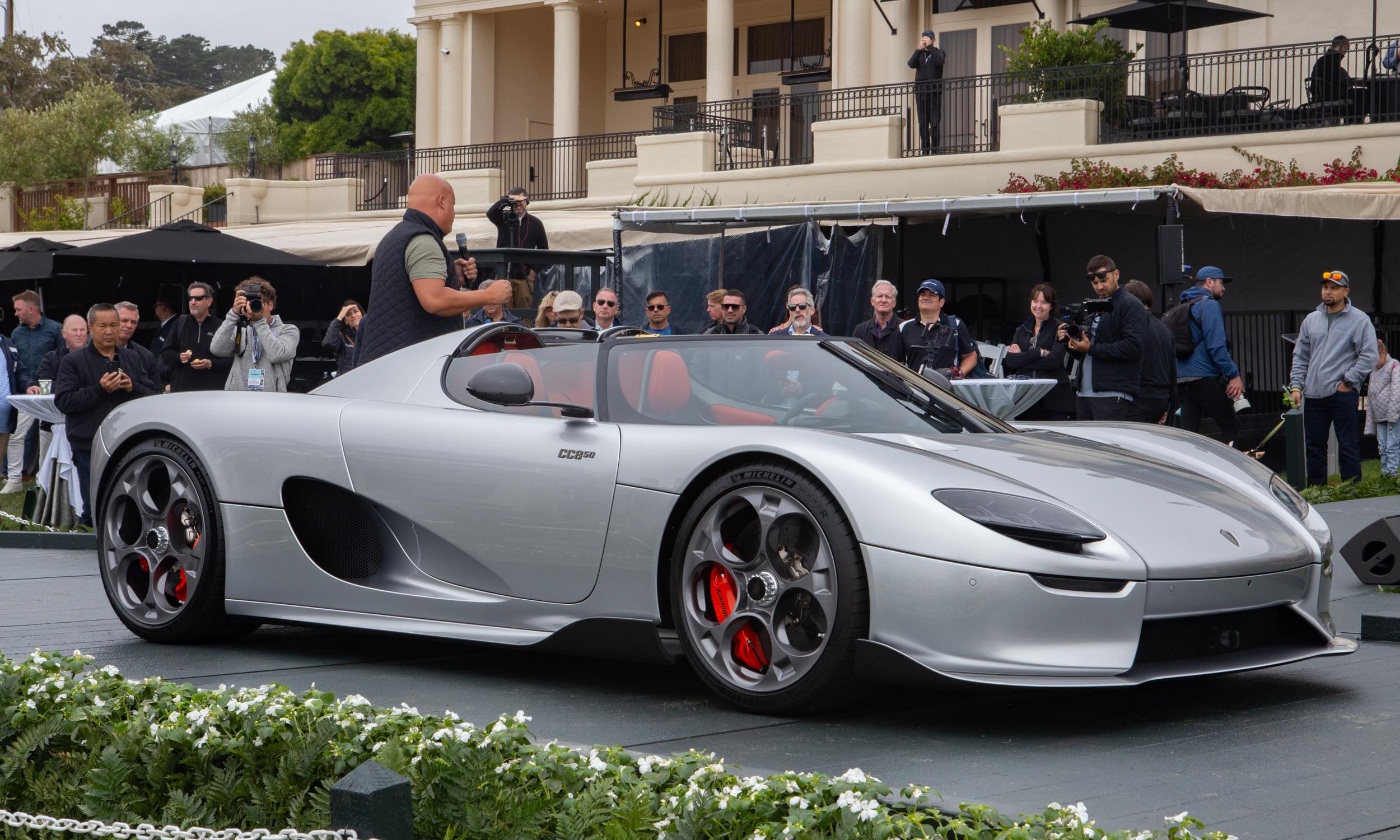 Honoring an Original
Twenty years ago, Swedish car company Koenigsegg delivered its first car, the CC8S. Eight years in the making, the CC8S was the world’s most powerful (at the time) production car with a top speed in excess of 240 mph. Now the company is honoring that original model with the new CC850 — a thoroughly modern take on the first, formidable Koenigsegg. 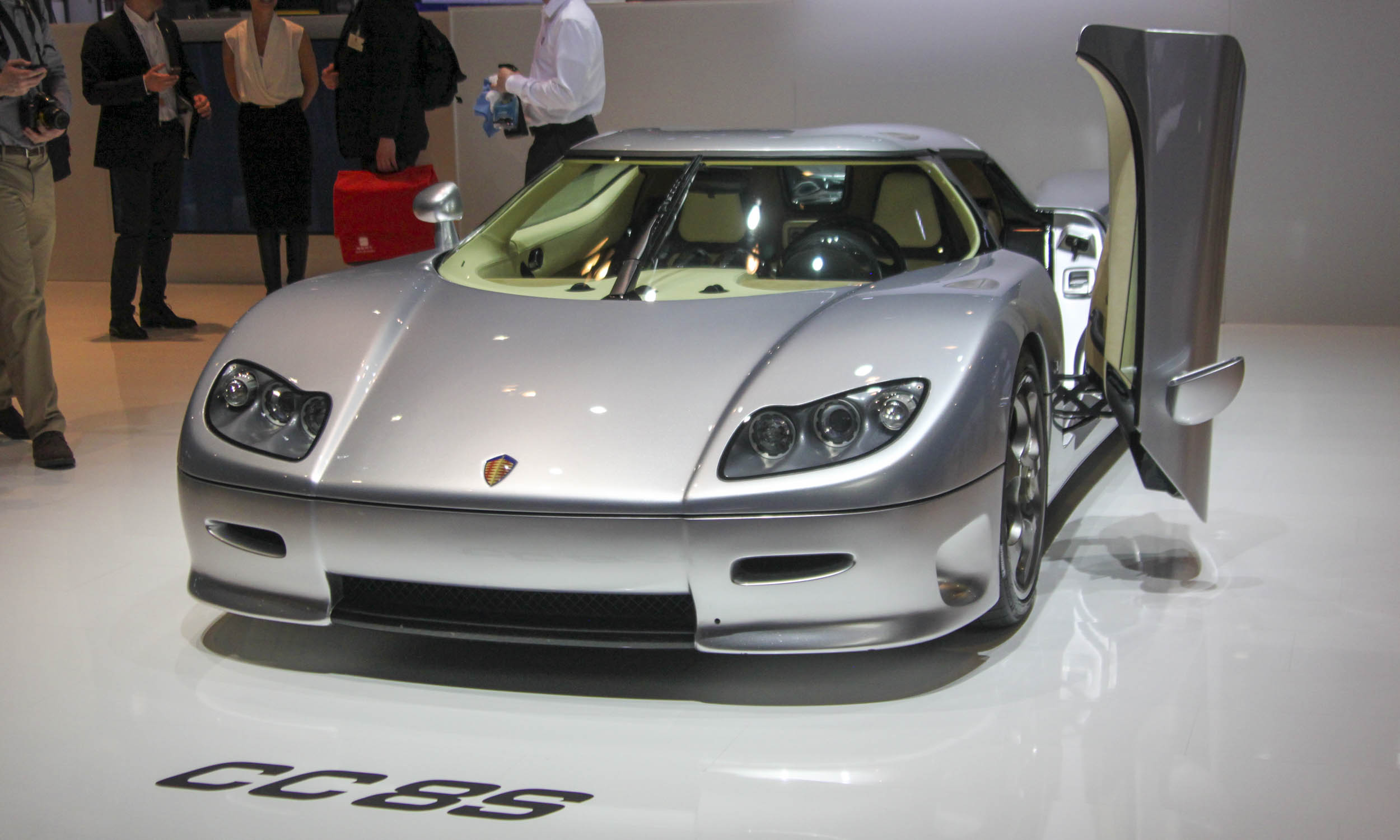 Paying Homage
“The CC850 is an homage to the single most meaningful car in Koenigsegg history,” said Christian von Koenigsegg, founder of the eponymously named company. “The CC8S put us on the map and made us successful — and celebrating 20 years of production, alongside my 50th birthday, felt like the right time to reveal the CC850 to appreciate our roots,” observed Koenigsegg, who announced that the first one would be a birthday gift to himself. 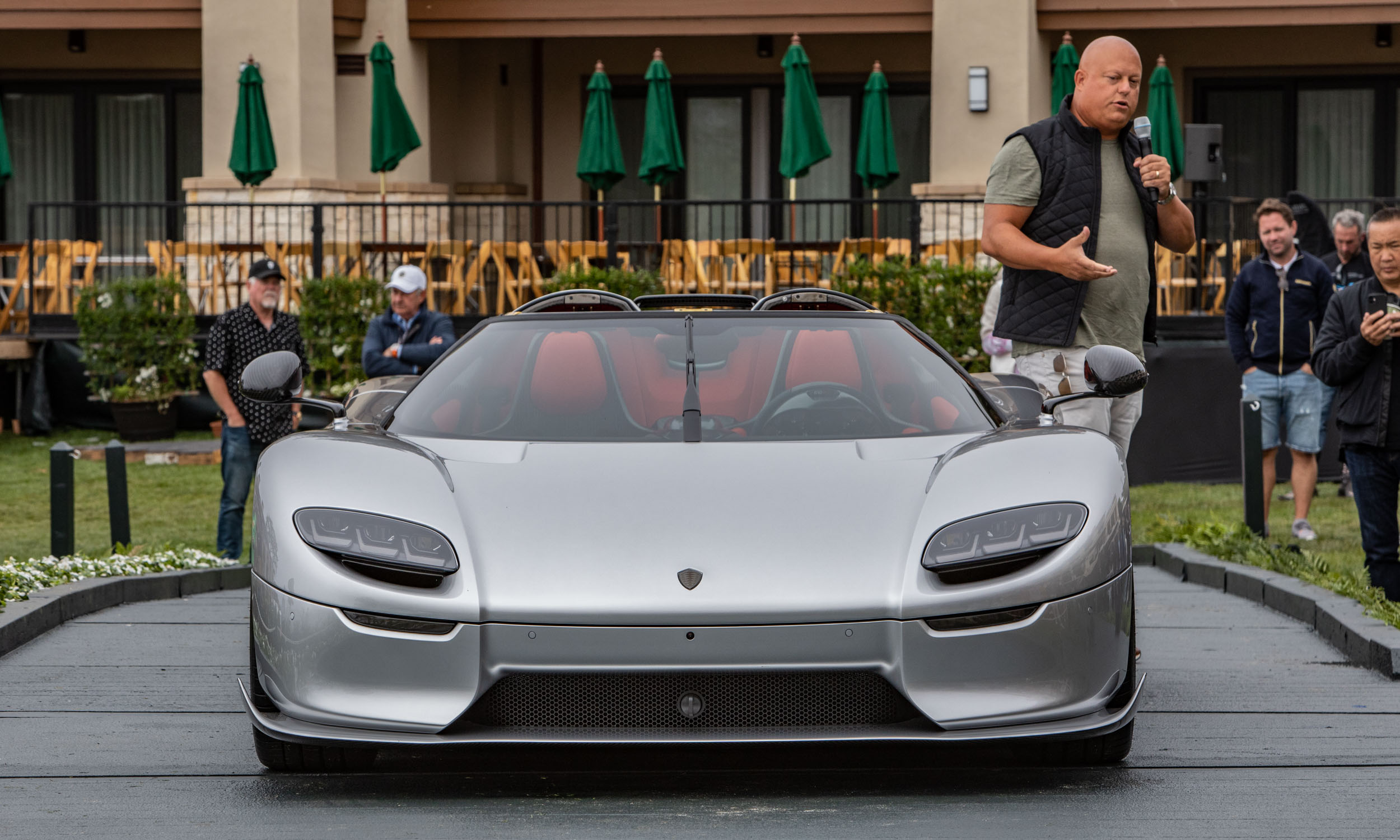 Familiar Look
Designers kept the original CC8S in mind when creating this new CC850. Up front are familiar three-section headlights and a deeply sculpted hood, both like the original but with a modern reinterpretation. The new car sits low and wide with an integrated front splitter. A single windshield wiper is centrally mounted, again like the original CC8S. 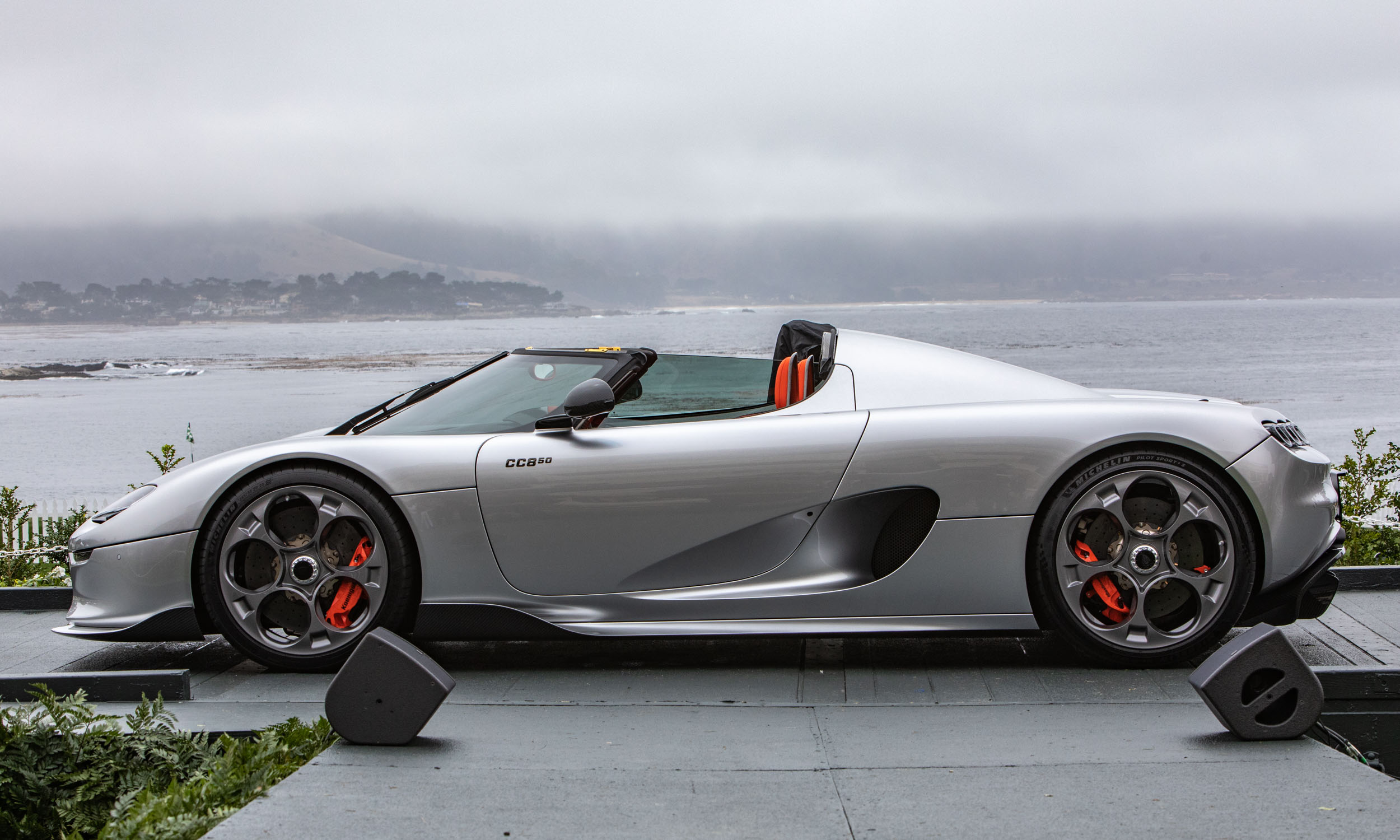 Uncanny Resemblance
It’s surprising how closely designers came to replicating the look of the CC8S in this all-new sports car. The windshield wraps the cockpit in the manner of a fighter jet and — like other Koenigseggs — the hardtop is removable. Doors feature a deep air intake to provide cooling to the rear-mounted engine, and even though the wheels are larger on the new model, they have the same “telephone dial” styling as on the original. 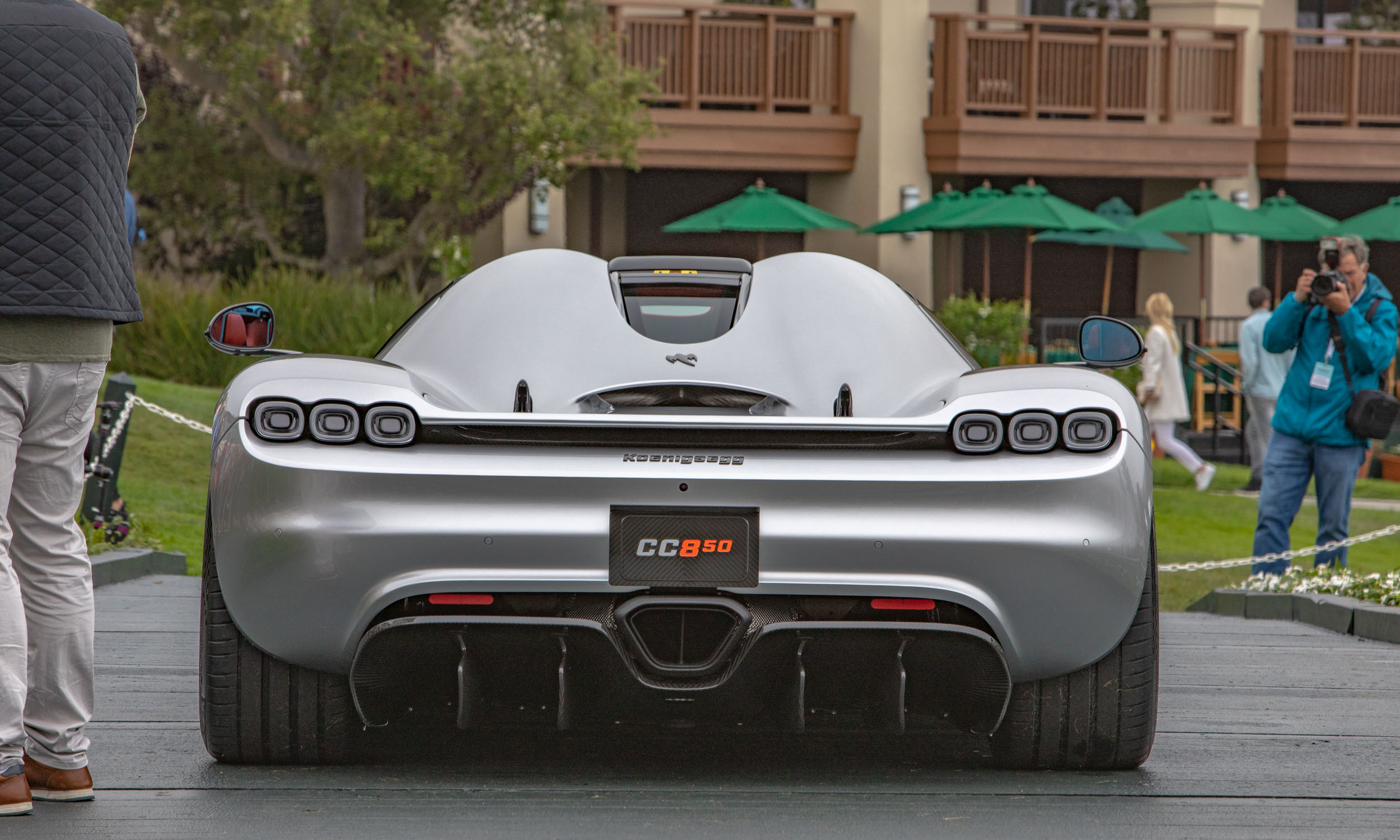 Rear View
The new Koenigsegg CC850 carries the same triple taillights as the CC8S, and the exhaust outlet is still centrally located. The double bubble cockpit and small rear window are maintained as well. 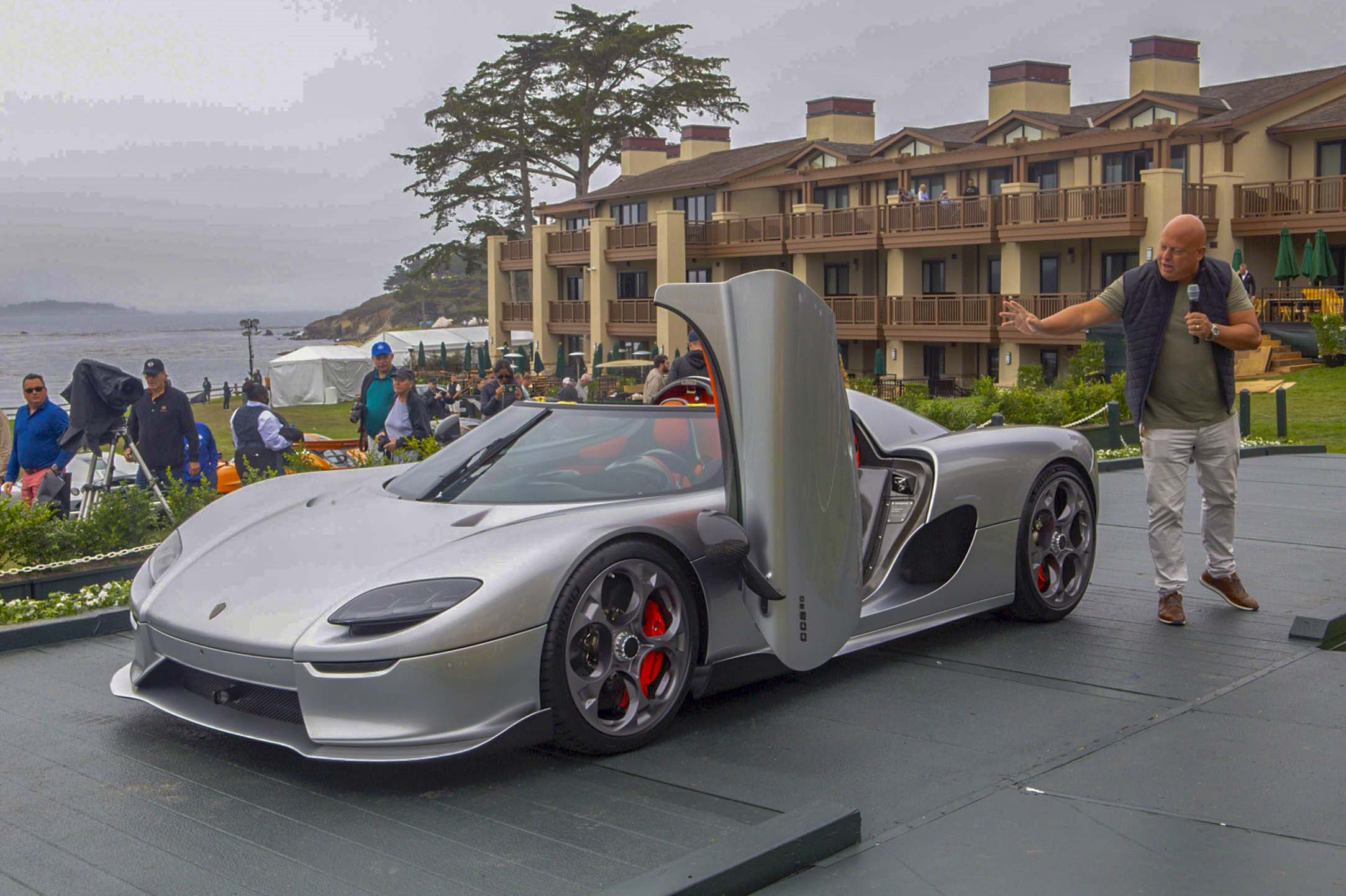 Unusual Doors
As with every Koenigsegg that has come before it, the CC850 features the company’s signature synchrohelix door system, which is an ingress/egress unlike any other car on the market. 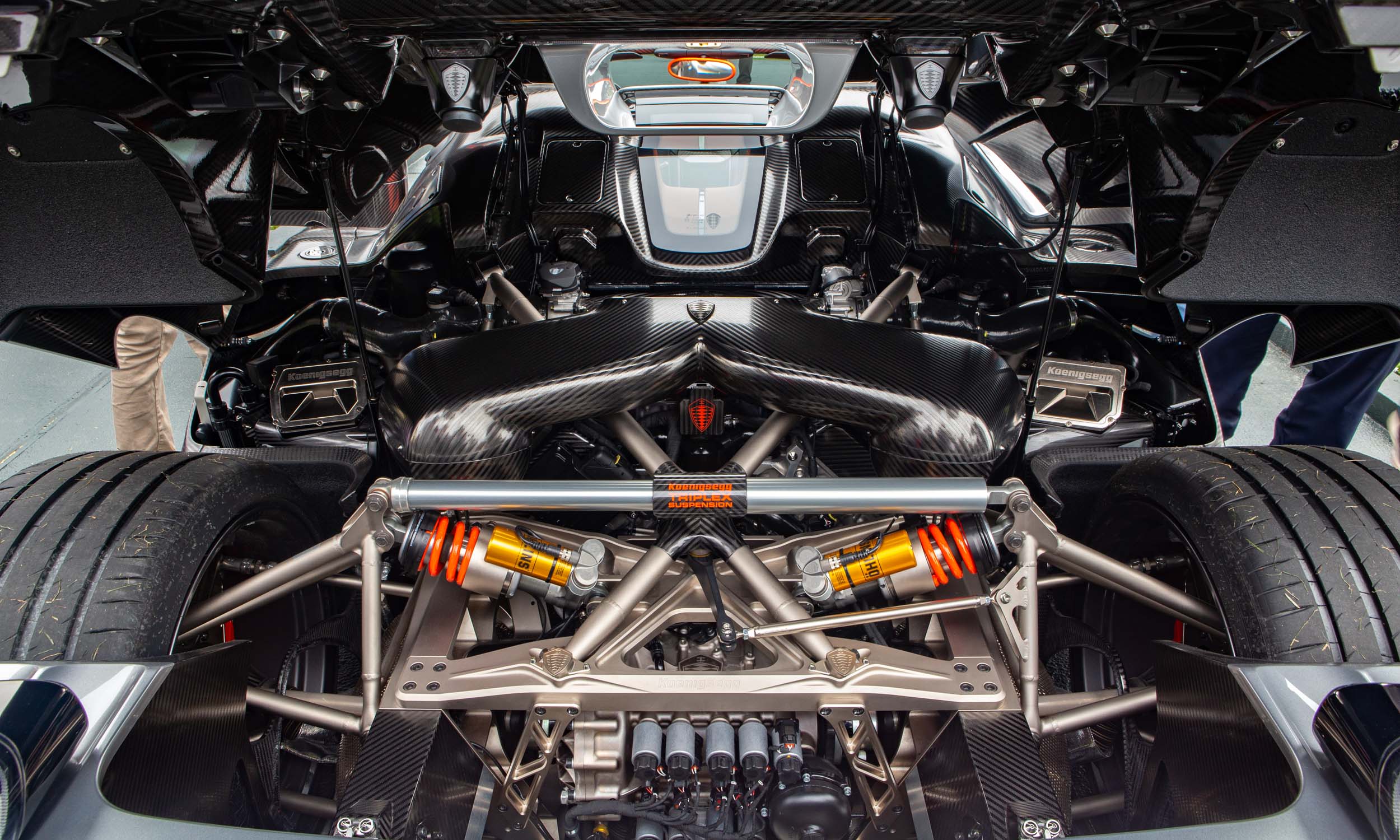 Big Power
When the CC8S premiered, critics grumbled that the company was irresponsible to be putting an incredible 655 horsepower into a road car. Times have changed — today even some SUVs possess that much power, and the CC850 has much more. The new model’s 5.0-liter twin-turbo aluminum V8 engine produces as much as 1385 horsepower and 1020 lb-ft of torque. 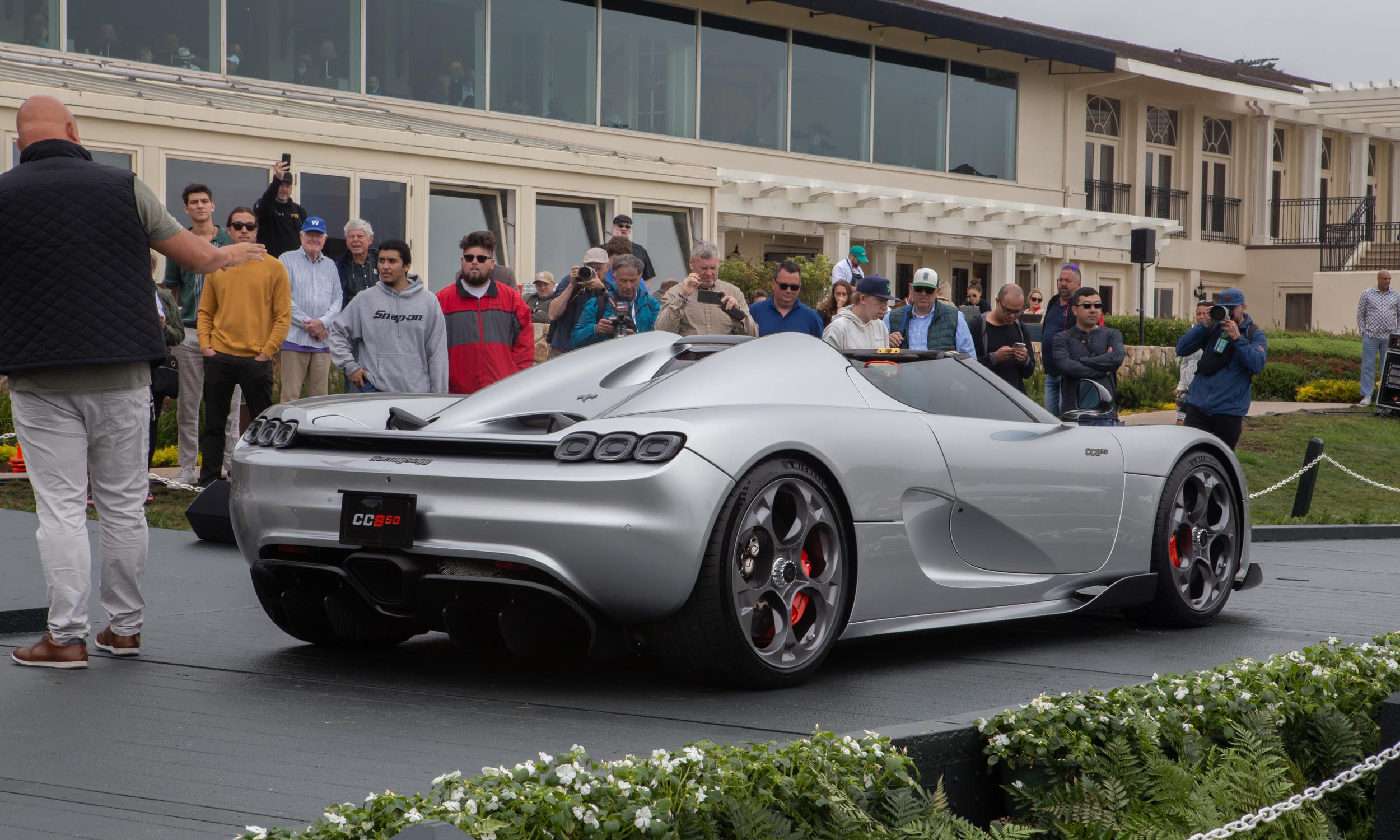 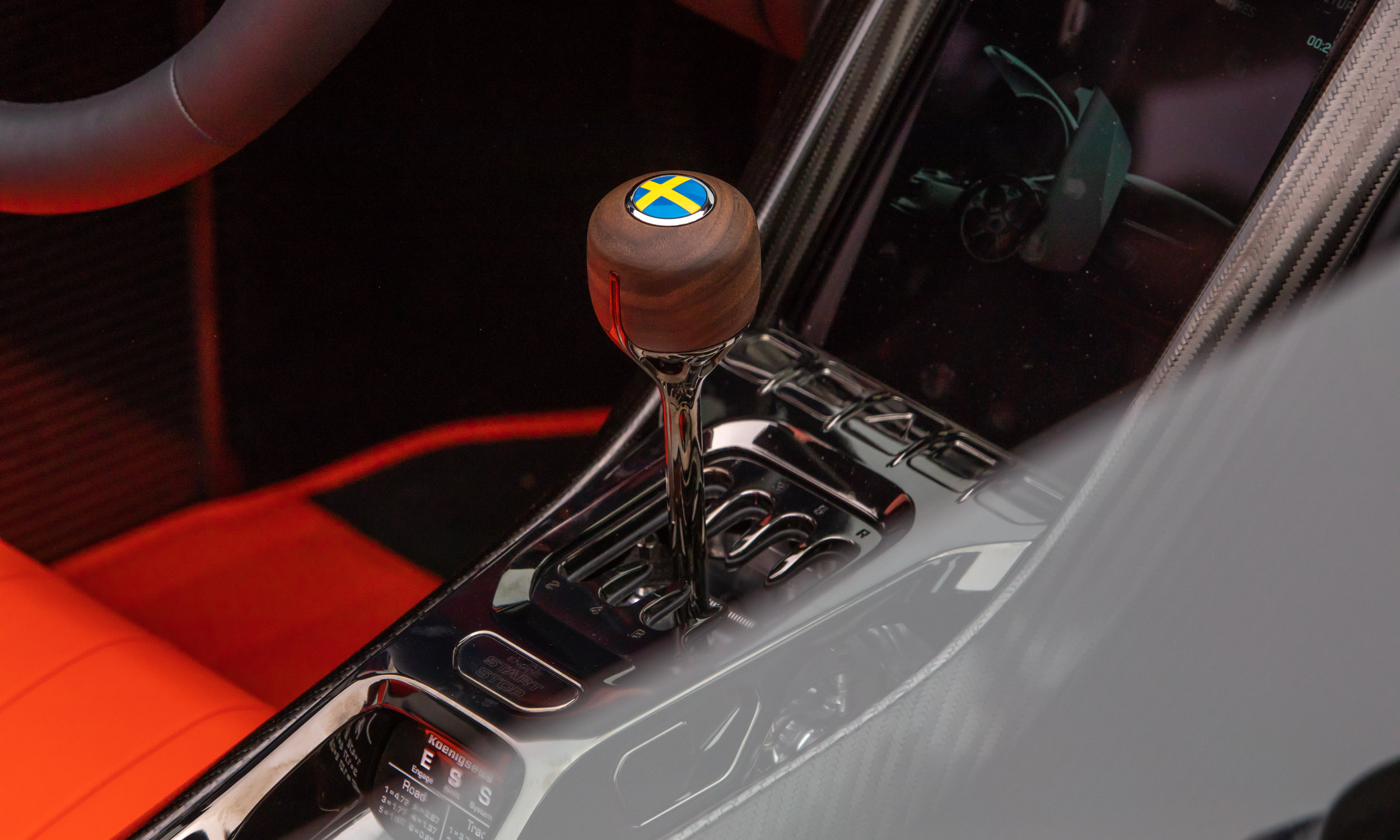 Unique Transmission
Perhaps the most unusual aspect of this new Koenigsegg CC850 is its 9-speed Light Speed Transmission with an Engage Shifter System. Employing multiple gears and clutches, the LST allows the driver to go from any gear to any gear without the need to shift in sequence. The ESS makes it possible for the CC850 to have a gated 6-speed manual transmission — with a clutch — for those who want to properly engage in the driving experience. But unlike any other manual, this one can also be put in automatic mode to shift on its own without using the clutch. 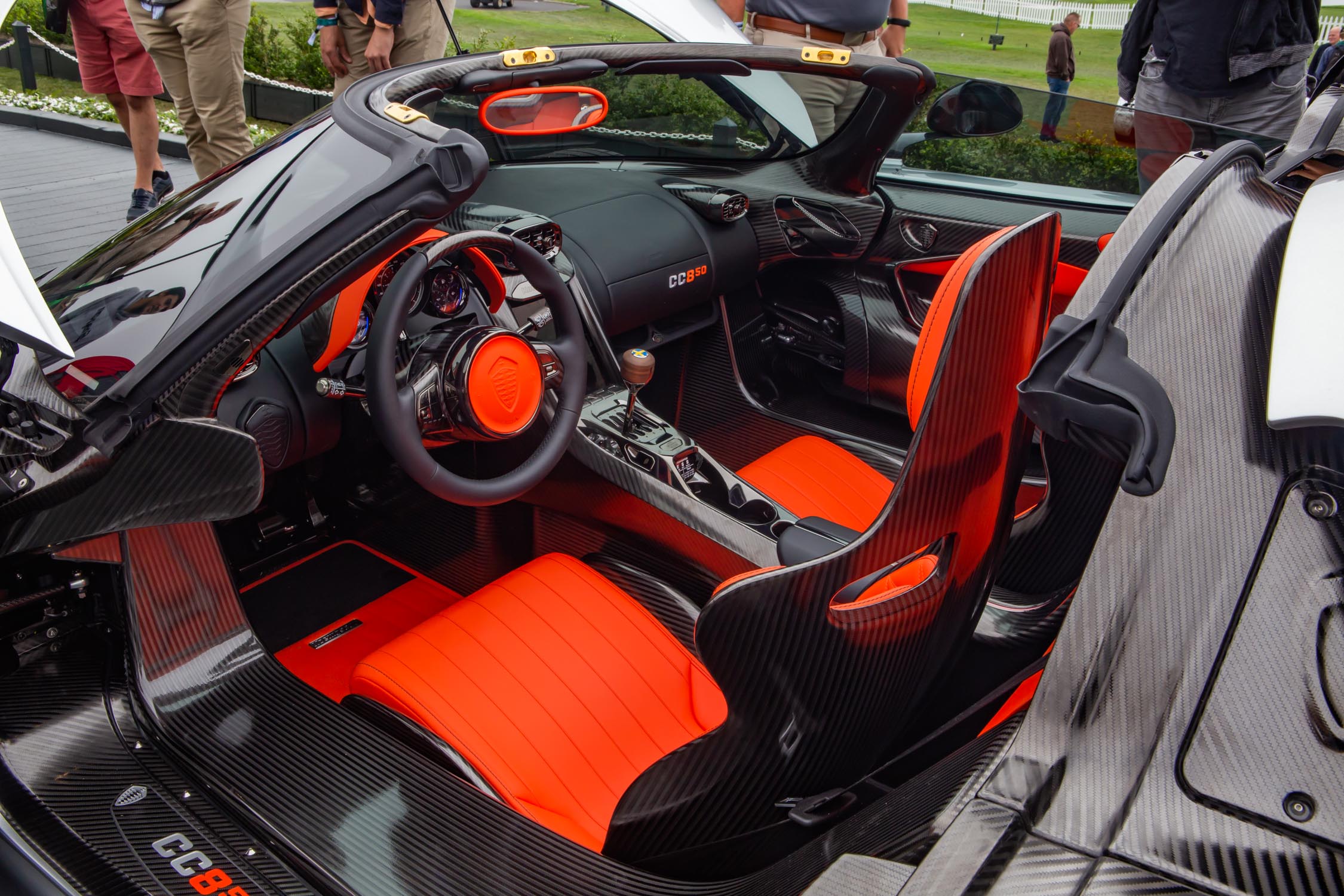 Chronocluster
The gauge package in a Koenigsegg has been evolving since the first Chronocluster debuted in the CCX in 2006. Chronocluster is the Swedish automaker’s name for the innovative presentation of essential vehicle information, and it has undergone improvement throughout the years. For the CC850, Koenigsegg introduces the next-generation Chronocluster. In the new system gauges show different gear ratios based on the engaged gear, and the needle movement is designed to change speed as necessary. The presiding idea is to present all important information so it can be digested at first glance yet be designed in a classic analog style. 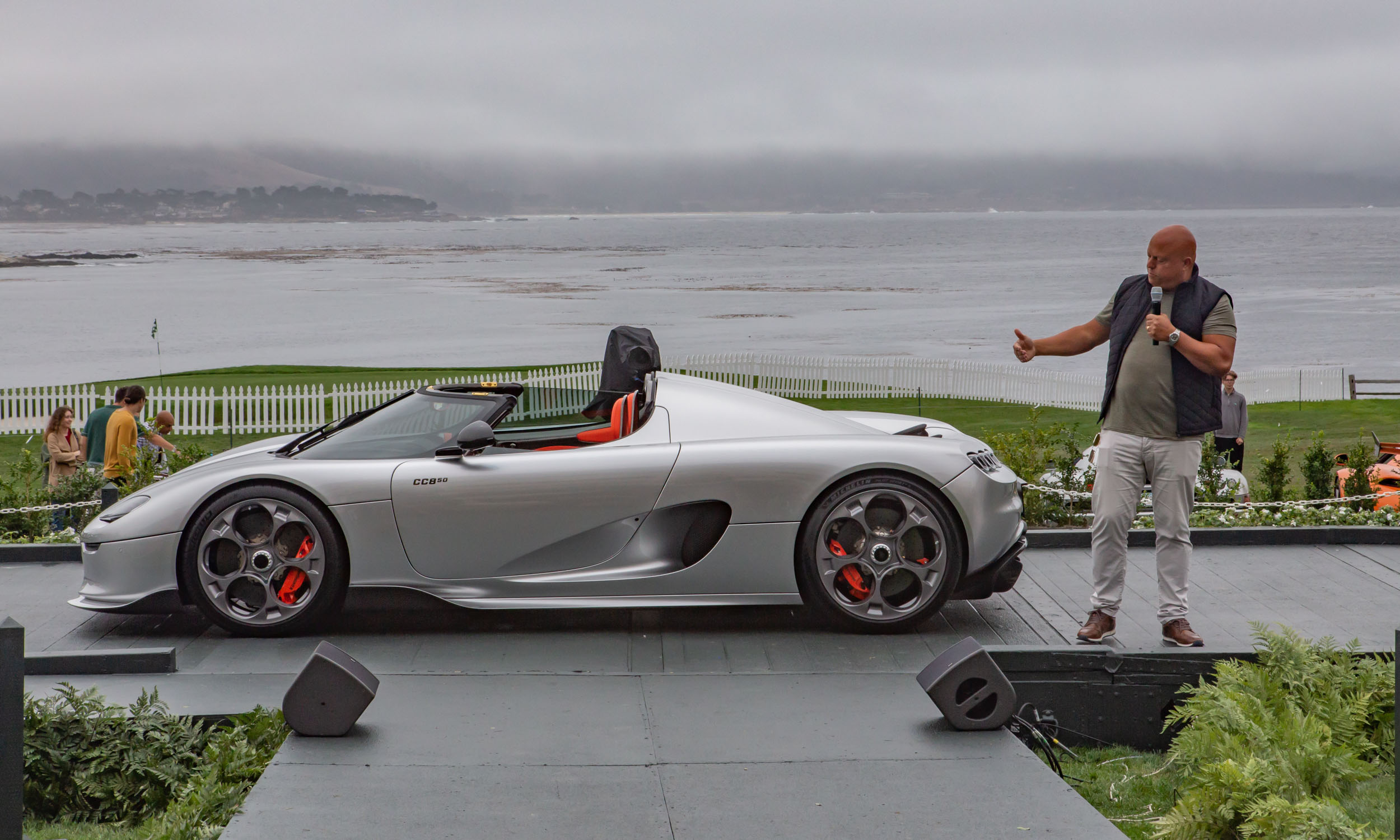 A Few More
During the CC850 introduction of at the 2022 Pebble Beach Concours d’Elegance, Koenigsegg announced that 50 examples of the CC850 would be built in honor of Christian Von Koenigsegg’s 50th birthday, priced at US$3.65 million. However, demand proved to be much higher than expected for this special car — the 50 cars were spoken for almost immediately. “Clearly, we struck a chord with the connoisseurs and the fans by blending our roots with novel thinking and a timeless design that stands apart from the rest,” said Koenigsegg. “We are humbled and grateful for the response and will do our utmost to exceed expectations,” he noted. With that, the company announced an additional 20 CC850s would be built, so expect those also to go quickly if they haven’t been snapped up already. 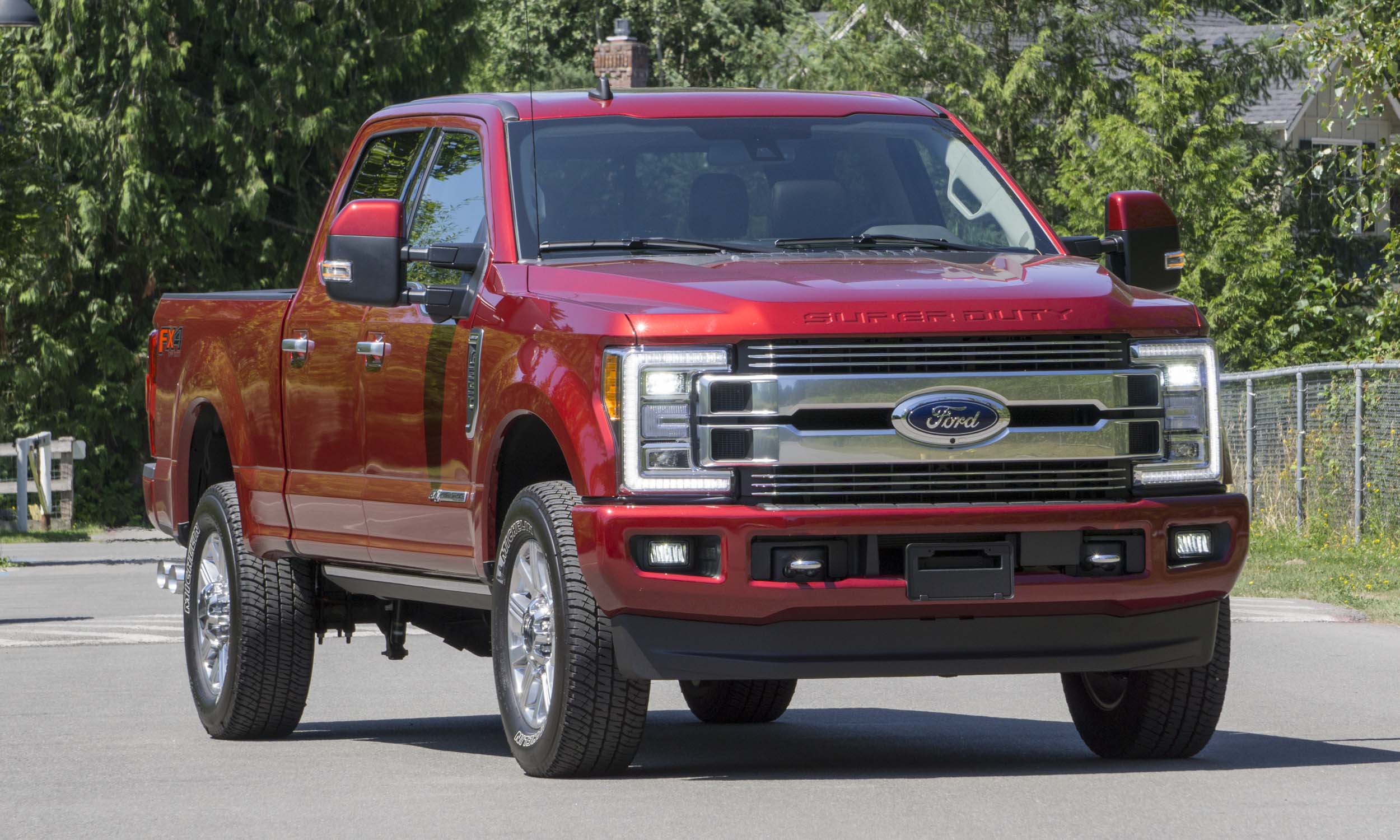