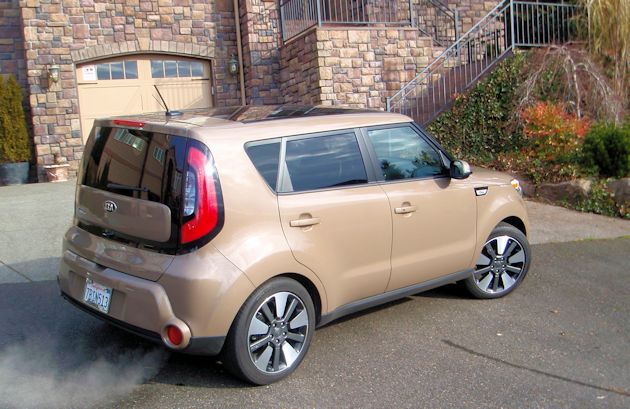 It may have been the brilliant series of head-bobbing hamsters in Kia advertising that initially helped fuel the success of Soul, but it?s the 2014 Kia Soul that has the elements to keep advancing Soul popularity as the ?hamsterian? novelty wears off.

The 2014 Kia Soul takes the uniquely designed wagon to a new level of maturity by advancing the design, driving dynamics and luxury quotient.

We experienced the refinement of this small boxy wagon during a recent test drive, and we felt more like we were in an entry luxury car as we enjoyed features from a Kia Soul !, which was loaded with the Whole Shebang Package ($2,500) and Sun & Sound Package ($2,600). Those two extras took the nicely equipped Soul ! and added equipment like HID headlights, push button start, leather seating, heated and ventilated front seats, heated rear seats and heated steering wheel. Then there was the navigation with an eight-inch screen, Sirius/XM satellite radio with traffic, automatic climate control and a humongous panoramic sunroof with power sun shade. There is a lot of appeal in this new Soul. 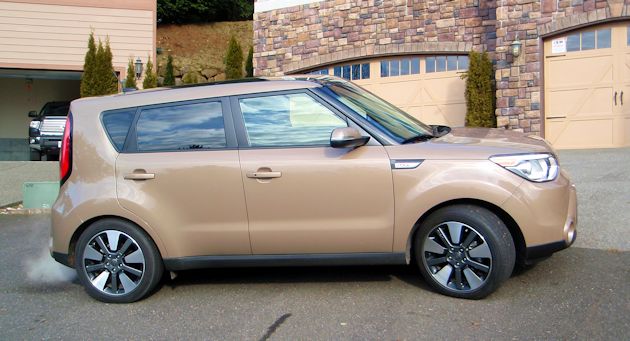 The 2014 Kia Soul ! also gets high marks from us for its agile fun-to-drive feeling, with the bonus of being quiet and comfortable, too. The two upper level models ( + and !) are powered by a 164-hp 2.0-liter direct injection four-cylinder engine. Both also have a standard six-speed automatic transmission driving the front wheels. The console-mounted shift linkage even has a shift gate allowing the driver to manually shift the transmission to maximize control. The Soul accelerates from 0 to 60 in 8.1 seconds and earns an EPA fuel economy rating of 23 mpg city, 31 mpg highway and 26 mpg combined. It registered 26.5 mpg during our time behind the wheel. 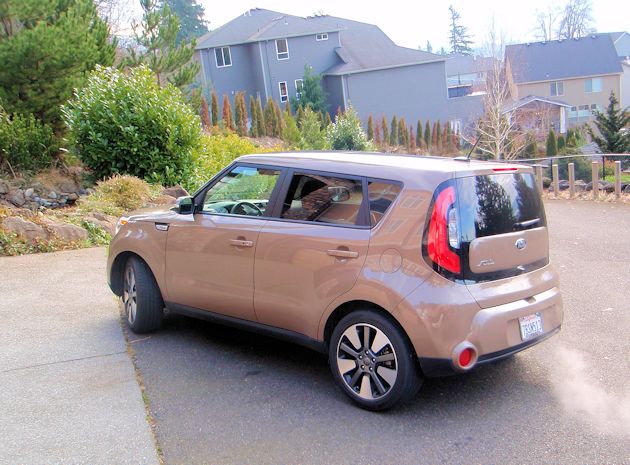 The Base model Soul has a 130-hp direct injection 1.6-liter four-cylinder engine and standard six-speed manual transmission with the six-speed automatic as an $1,800 option. 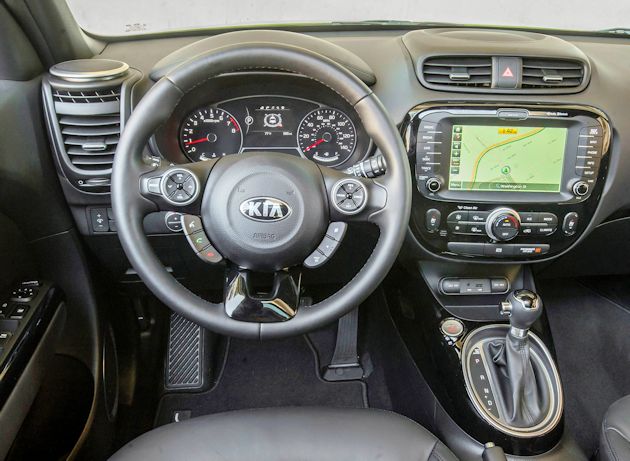 From a driver?s perspective, the Soul is a great fit with well-placed and precise-feeling controls along with easy to see and understand instrumentation. The 16 steering wheel-mounted controls are well-marked and easily controlled by the driver thumbs ? we are thinking they had the texters in mind when designing the steering wheel because they seem to have such talented thumbs. The Soul steering is also equipped with a new Flex Steer? system that seems to nothing more than change the amount effort required to turn the wheel from Comfort, Normal or Sport. 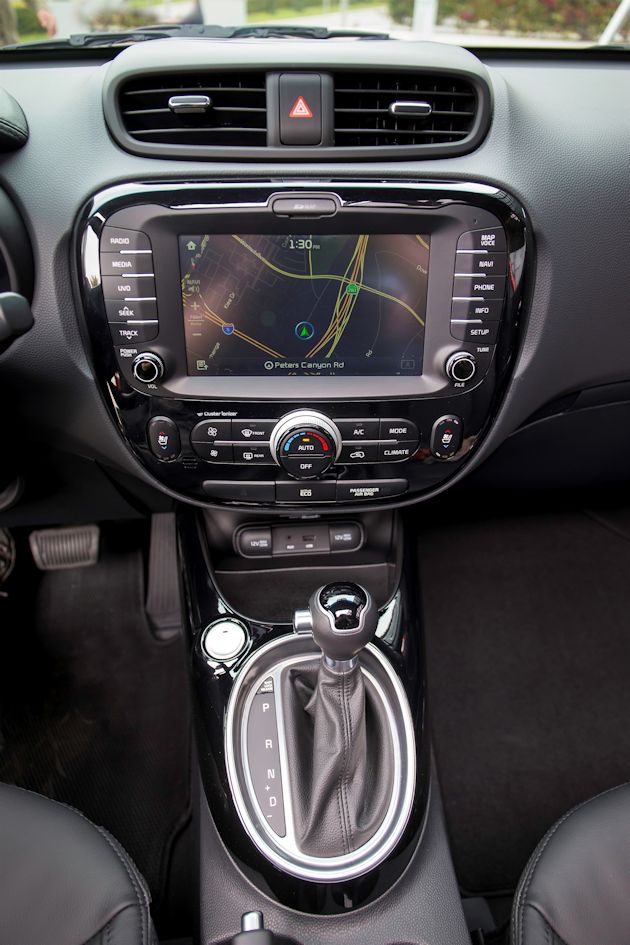 The new large eight-inch screen is excellent and easy to use, but we would like to see it a bit higher on the center console. The eight-inch screen plays host to Kia?s second generation UVO eServices, navigation and audio functions. The large touch screen allows someone to scroll through the available services and menus with the stroke of a finger to select from the extensive audio features, navigation menus and the SiriusXM? Data Services with Travel Link. The audio features Pandora? Internet radio directly through the Kia headunit so it?s not necessary to use a Smartphone for controls. Data Services include, travel information such as road conditions, weather and security alerts as well as sports scores, movie times, stock prices and fuel prices through the screen?s graphical interface and electronic program guide.

Although very functional, aesthetically, the dash looks a bit cluttered and we didn?t like the visor over the instrument panel which looked more like an afterthought. We also questioned the speaker placement on the top of the vents on either side of the dash ? but that?s probably more of a ?love it? or ?hate it? call. 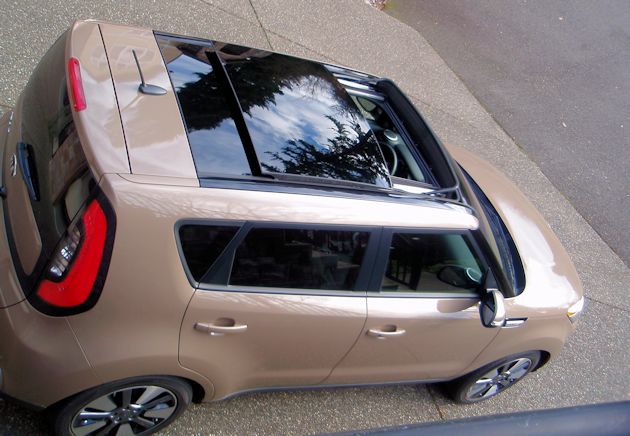 To add more of an open feeling the vehicles equipped with the optional Sun & Sight package get that massive panoramic sunroof, which opens in the area over the front seats. It also has a power screen that works as easy as putting on a pair of sunglasses. 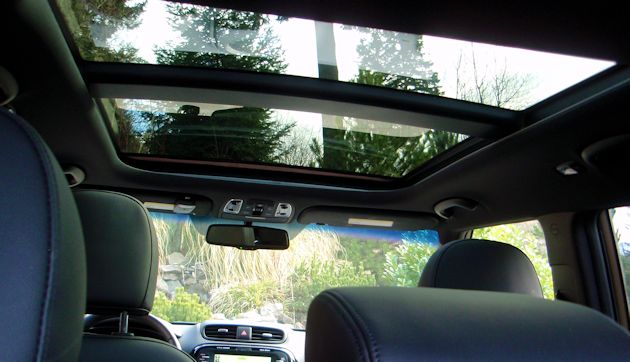 Overall, the interior comes together nicely and is a pleasant place to spend time especially with some of the nice features we talked about earlier ? heated and cooled seats and heated steering wheel. The heated wheel is something we?ve only seen before on cars costing twice the price.

The interior is very large with about the same space as the mid-size Kia Optima or Toyota Camry. The cargo space is about double those vehicles, though, with 24.2 cubic feet of room behind the rear seat and using the neat extra space tucked under the cargo floor. Fold down the rear seat back and that space expands to a massive 61.3 cubic feet. 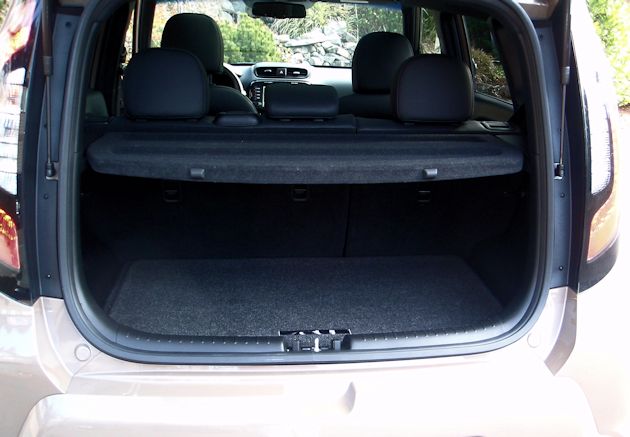 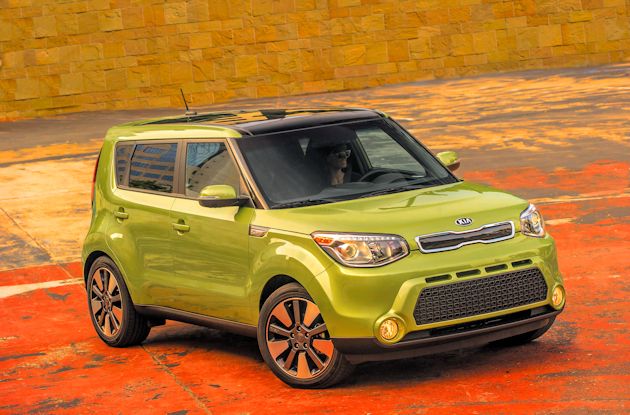 Initially, it?s easy to think about the 2014 Kia Soul as being something of a novelty because of its cute persona, but in actuality, it?s seems well built, with quality materials, fun to drive and quite practical, too. 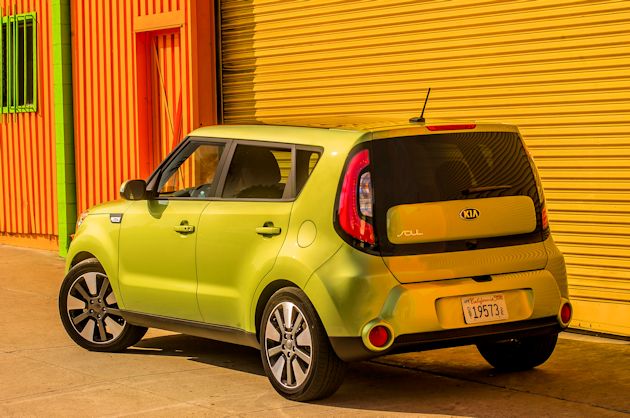 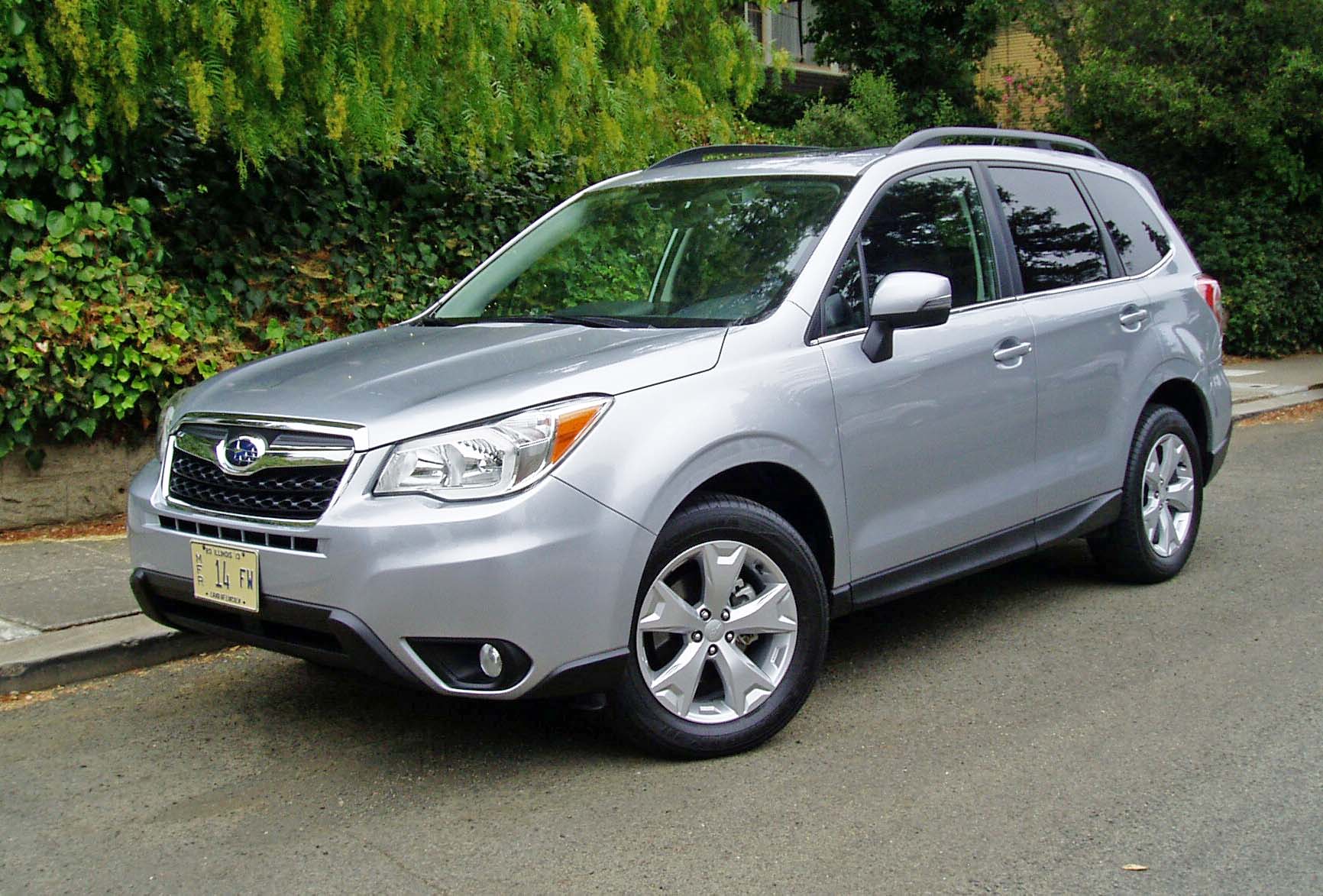