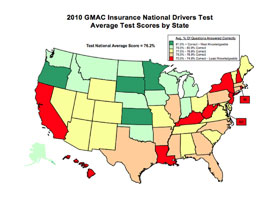 The sixth annual survey polled 5,202 licensed Americans from all 50 states and the District of Columbia, gauging driver knowledge by administering 20 questions taken from state Department of Motor Vehicles (DMV) exams. Additional questions explored distracting habits such as texting while driving.

Overall, findings indicate a large number of licensed Americans continue to lack knowledge of basic rules of the road; the national average score decreased to 76.2 percent from 76.6 percent in 2009. Eighty-five percent could not identify the correct action to take when approaching a steady yellow traffic light, and many remained confused by safe following distances.

When analyzed regionally, the results reveal that drivers in the Northeast may not be as road-rule savvy as their Midwestern counterparts. The Northeast had the lowest average test scores (74.9 percent) and had the highest failure rate (25.1 percent). The Midwest region had the highest average test scores (77.5 percent) and the lowest failure rates (11.9 percent).

Additional questions from the survey reveal drivers conduct a variety of distracting behaviors behind the wheel; approximately 1 in 4 participants admitted to driving while talking on a cell phone, eating and adjusting the radio or selecting songs on an iPod. However, only five percent reported they text while driving. Overall, a significantly higher percentage of females than males reported engaging in the following distracting situations: conversation with passengers, selecting songs on an iPod or CD/adjusting the radio, talking on a cell phone, eating, applying make-up and reading.