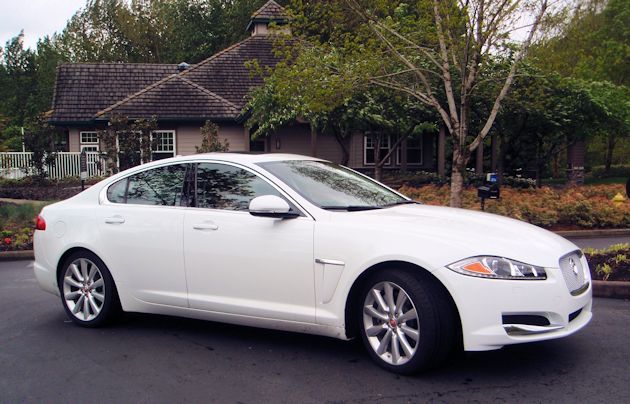 A comprehensive shopping list of luxury cars today could include dozens of models from European, Asian and American manufacturers. One of our favorites, which sometimes gets overlooked due to the overinflated status of some German models, is the Jaguar XF sedan.

We recently had a refresher in a ?basic? model of this mid-size luxury sedan and it instantly reminded us of all the great things we like about it.
We say basic, because usually automakers load up the features on the press fleet cars. When they do that, its gives us a sample of those features to write about, plus we?re spoiled, we enjoy having extra technological and luxury goodies on the cars we drive ? yes, we are spoiled. 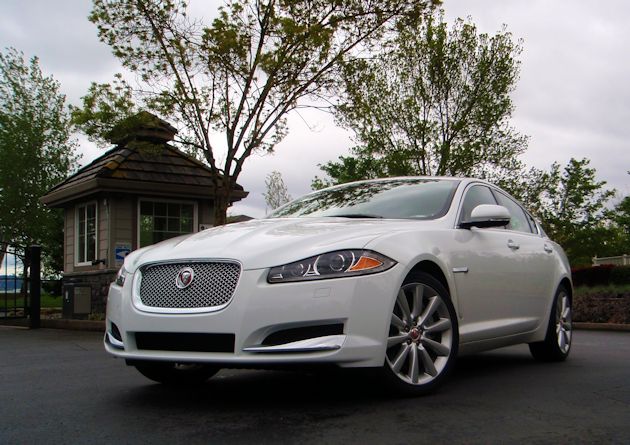 Our 2014 Jaguar XF S/C AWD really didn?t feel much like a base model, coming standard with a long list of standard equipment that include things like 19-inch alloy wheels, Xenon headlights, heated leather seats and seven-inch touch screen. The only options on our test car included a $750 cold weather package (heated steering wheel and heated windshield) and split folding rear seat with ski hatch $125). It already comes with standard heated, rain sensor wipers and headlight washers for a total price of under $55,000. Loaded with all the available options the price can go as high as the mid-$70,000s. 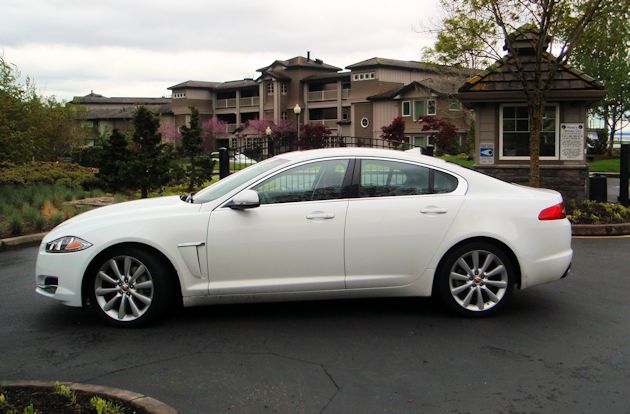 Like many luxury models, the XF comes in a very wide range of prices and features. Jaguar XF pricing starts as low as $47,870 for the new four-cylinder turbocharged model and can go as high as $99,895 for the 550-hp supercharged 5.0-liter V-8 XFR-S model. In-all there are five engine choices now for the rear-wheel drive sedan. The line performance ranges from a 7.5-second 0 to 60 mph time for the four-cylinder up to a 4.4 second time for the biggest supercharged V-8.

Our more ?basic? model is powered by a 340-hp supercharged 3.0-liter V-6 engine and was equipped with all-wheel drive, which is only available with this engine. Combined with Jaguar?s new eight-speed automatic transmission our test car accelerated to 60 mph in a quick 6.1 seconds. Our car had an EPA fuel economy rating of 16 mpg city, 26 mpg highway and 19 mpg combined. We actually averaged 20.3 mpg during the week we were driving. 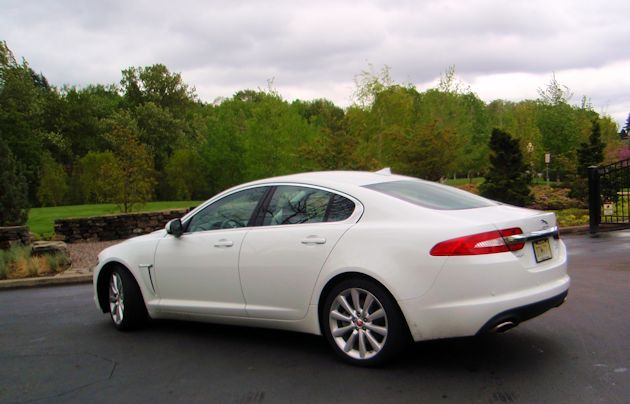 The engine employs a new Stop/Start system to cut fuel usage when the car is stopped for a traffic signal or in normal idle situations. When the driver takes his or her foot off the brake with the engine stopped, a twin solenoid starter restarts the engine in less time than it takes the driver?s foot to move from the brake pedal to the accelerator and the change is subtle. We think this might be one of the best Stop/Start systems we?ve driven.

The new direct injected V-6 engine is a cut down version the Jaguar V-8 engine. The Roots-type vortex supercharger is mounted in the engine?s ?V? and uses a water-cooled intercooler to keep the intake temperature lower. 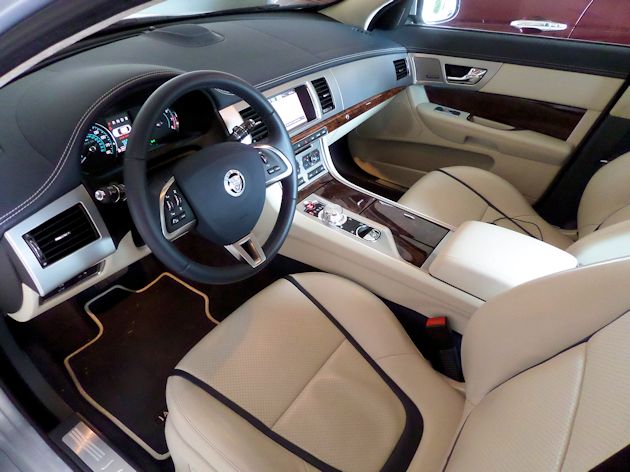 The new eight-speed ZF automatic transmission is tuned to meet Jaguar?s special needs and is now used in all XF models Jaguars. The transmission not only improves fuel economy but also produces smooth quick shifts. We love the simplicity of the control system which uses a large metallic dial for gear selections (the one that rises out of the center console when the engine start button is depressed), then supplements that with steering wheel-mounted shift paddles for those of us who like to be more in control. 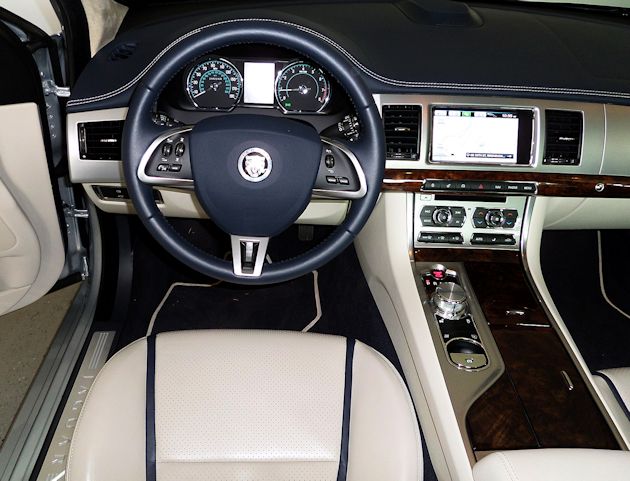 The all-wheel drive transfer case is mounted on the rear of the transmission and it controls the power transfer to the front differential. Like most AWD systems, this one transfers the power to the wheels with the best traction. The system defaults to 100 percent rear-wheel drive, until front traction is required. 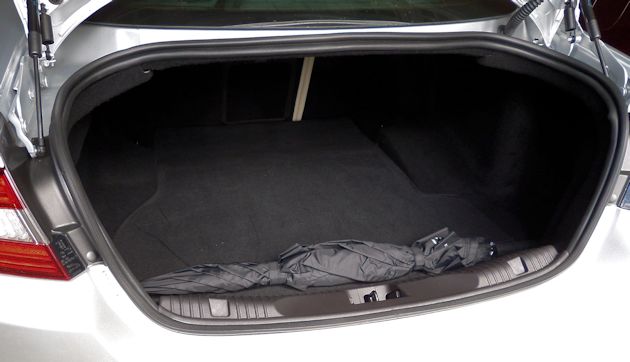 All the mechanicals combined make the Jaguar XF and excellent driving car. It?s fast, agile, hugs the road and stops quickly.
The Jaguar XF gets high marks for its good looks, too. Maybe it?s not as dramatic as its big brother/sister, the Jaguar XJ, but the XF has a clean distinctive look that still turns our heads each time we see one on the road.

The interior has a classic British flavor ?elegant but simple ? and very comfortable. The one weak link might be the slightly tight rear seat headroom which is a product of the sleek coupe-style roof line, but we think it?s worth the sacrifice. Also we don?t have to ride in the rear, if we wanted a car for that, we?d prefer the limousine-like rear seating of the Jaguar XJL. 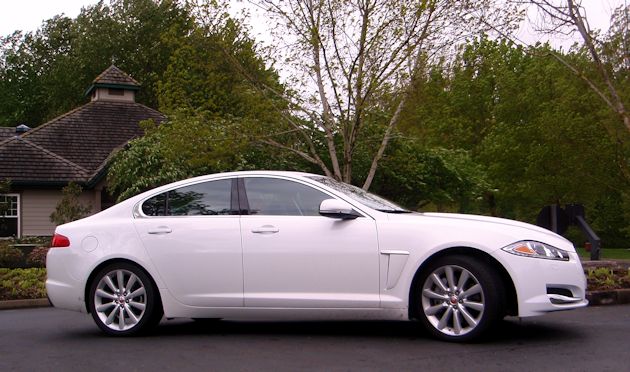 The XF has all the popular connectivity features, but we find them slightly more complicated to operate than some of competitors. Barbara?s only complaint during our drive time was the lack of a sliding or extending sun visor to help block out the sun from the side.
Overall, it?s easy to like the Jaguar XF AWD. It?s fun to drive, and we especially like the addition of all-wheel drive and the spunky new smaller engines.

When you start looking at the escalating prices of some of the less prestigious sedans, being able to buy three different genuine Jaguar models for under $55,000, it looks like a real bargain. We?re also looking forward to a yet to be announced diesel version. 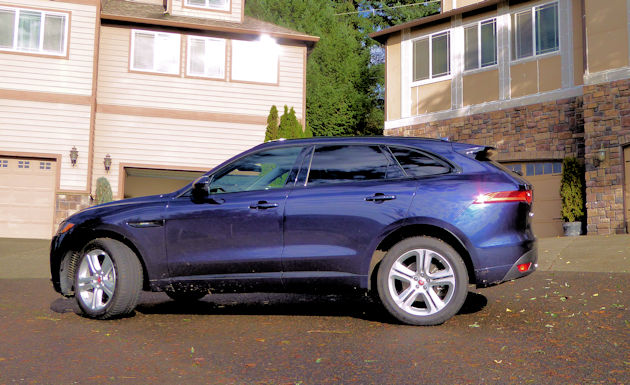