Jaguar plans to add new smaller engines to its global offerings including a new supercharged 3.0-liter V-6 and a turbocharged 2.0-liter four-cylinder.

Adrian Hallmark, Global Brand Director, Jaguar Cars, said, “Jaguar currently has its strongest range of products for several decades. Our continued growth is dependent on two things; activating the awareness of the brand, and expanding our range to enable us to access new customers in both existing and emerging markets. The introduction of these two additional forced-induction engines is integral to this ambitious plan.” ?The new V-6 engine was derived from Jaguar?s potent 5.0-liter V-8 incorporating key technologies from the V-8 engine including direct injection, variable valve timing and aluminum construction. It will also be available with Jaguar?s Intelligent Stop-Start system.? The engine, which will be offered in 340- and 380-hp models, with comparable levels of power and refinement to the naturally aspirated version of the V-8 engine, but with greater specific output and efficiency courtesy of supercharging.

The supercharger, which is mounted in the ?V? between the cylinder banks, is the latest-generation Roots-type twin vortex model. ?It uses a water-cooled intercooler

to reduce the temperature of the intake air to optimize power and efficiency. The supercharger boost control is electronically managed by new Bosch engine management software.

The Turbocharged 2.0-liter four-cylinder engine, which is currently being used in the Range Rover Evoque, was developed from Ford?s EcoBoost program.? It?s rated at 240-hp, and produces impressive levels of power in the Evoque.

Ron Lee, Group Chief Engineer Powertrain, Jaguar Cars, said: “Both these new engines make intelligent use of forced-induction technology to produce high-specific output in an efficient way, while delivering the compelling combination of flexibility, refinement and driver reward that are integral attributes in all Jaguar engines.”

Both engines will be hooked to a Jaguar-tuned ZF eight-speed automatic transmission. 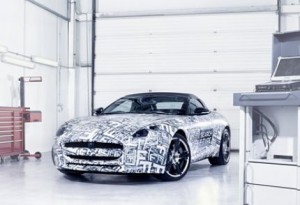 The first announced utilization of the 380-hp Supercharged 3.0-liter V-6 will be in the all-new Jaguar F-Type two-seat roadster, scheduled to arrive 2013.