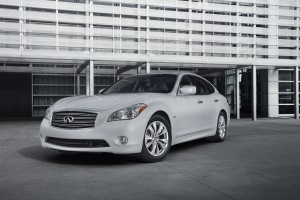 With the record keepers from Guinness World Records? standing by and automotive journalist Tom Pollard at the wheel, the Infiniti M Hybrid became the world?s fastest accelerating full hybrid.

Recording an average time of 13.9031 seconds for a series of quarter mile runs, Pollard, ?said he got the best times by just letting the automatic transmission shift on its own.

The standard production model Infiniti M Hybrid set the record on August 23, 2011 at the UK?s Santa Pod Raceway, home of the FIA European Drag Racing Championships. ?The hybrid uses a combination of electric motor torque from 0 rpm and V-6 power at high revs to achieve the record time with speeds in excess of 100 mph for each run.

“The Infiniti M35h proves that hybrids can be fast as well as frugal,” said Pollard who is associate editor of the UK’s CAR Magazine. “At Santa Pod you could feel the instant torque of the electric motor away from standstill ? the car just leapt off the line. I did try changing gears manually, but it was fastest left in automatic. That was when we achieved the fastest single run of 13.8960 seconds.

Pollard continued. ?But what impressed most was the Infiniti M’s duality of purpose: it might be quick, but it’s also comfy and very easy to drive. It felt like it could do these runs all week long.? 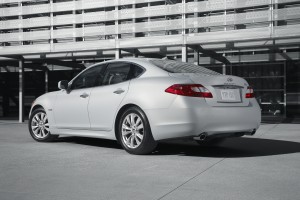 The result is all the more remarkable because the Infiniti M Hybrid emits just 162g/km of CO2 and, on the combined cycle, gets 29 miles per gallon.

The point behind the exercise, which can be watched at www.carmagazine.co.uk, was to show that the Infiniti M Hybrid?s 62 mph time of 5.5 seconds ? itself the fastest time listed for a full hybrid ? was just one facet of the car?s overall Inspired Performance. ?The standing quarter mile, an iconic acceleration test the world over, is a more demanding challenge than 0-62 mph and offers a more complete picture of a car?s acceleration.