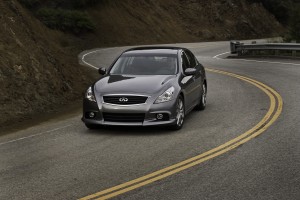 ?These unique and very limited editions represent what Infiniti is all about ? Inspired Performance,? said Ben Poore, vice president, Infiniti Business Unit. ?Building on the popularity of the Monaco Red Leather and special Red-toned Maple interior that helped launch the G Convertible, the Anniversary Editions add a number of new styling touches that will make them instantly recognizable on the showroom floor and on the road.?

The Anniversary Edition Sedans and Coupe also receive the Sport Package and 4-Wheel Active Steer (not available on Sedan AWD). The Convertible is offered with the highly desirable climate-controlled seats.

Each Anniversary Edition comes in a new Graphite Shadow exterior color that was just added for 2010, with the interiors appointed with Monaco Red Leather. The Coupe and Convertible interiors are accented with special Red-toned Maple and the two Sedans have the new Shodo-finish aluminum trim.

?We wanted to ensure that the G Anniversary Editions are the sportiest and most distinctive Infinitis offered,? added Poore. ?Though they won?t arrive until April, we wanted to release pricing early to allow interested buyers to reserve the Anniversary Sedan, Coupe or Convertible of their choice before they are all gone.?