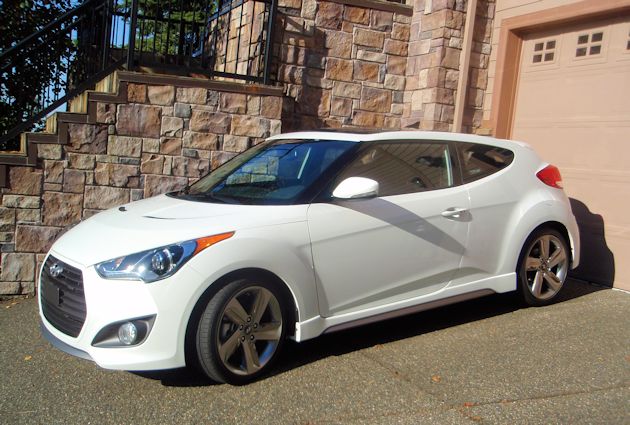 We have watched Hyundai with great interest since the Korean company started selling cars in the U.S. in 1986, but we?ve been especially fascinated the last dozen years as the company went from being the butt of jokes to being an industry leader.

One of the things that seemed to set Hyundai apart from the crowd is how they have addressed some of what we believe are important building blocks in the industry. For example, quality, performance, design and innovation were each developed with unique ideas, which help advance the brand in the market giving consumers the things they are looking for in a new car.

We recently renewed our acquaintance with the spunky little Hyundai Veloster Turbo and could easily see how it fit with those building blocks.?From the time the Veloster was first introduced, the only significant criticism we?ve had with the non-turbo Veloster was that we thought it needed more power. For most shoppers, it had enough power, but for driving enthusiasts, it was weak. That?s where the Hyundai Veloster Turbo comes into the mix. 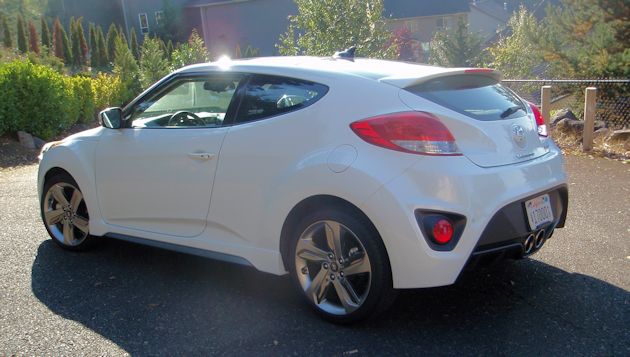 The Veloster Turbo looks different, thanks to a few features like a unique front fascia and grille, turn signal indicators in the side view mirrors and the 18-inch wheels with chrome accents.

But the big difference is under the hood. It has same 1.6-lite r direct injection engine, only with the addition of a twin-scroll turbocharger which pressurizes the input with 18 pounds per square inch of turbo boost. The result is a 46 percent increase in horsepower to 201 horsepower and 195-lb.ft. of torque. The original naturally aspirated engine made the 0 to 60 mph run in a respectable 8.8 seconds, and turbo drops that time to 6.8 seconds. The turbo engine is rated at 24 mpg city and 35mpg highway with the six speed manual transmission. The automatic drops the numbers to 24/31 mpg. 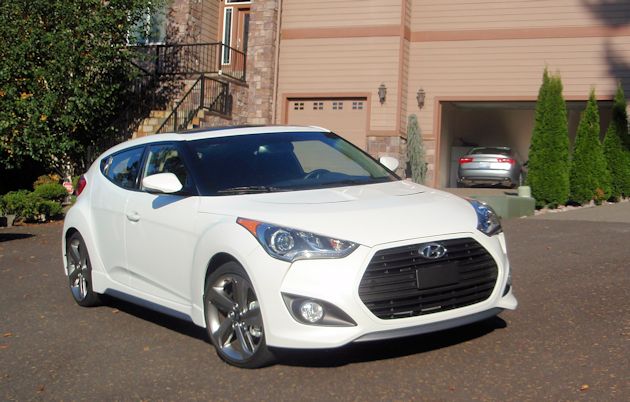 The car is nicely balanced with driving enjoyment that compares favorably with cars like the VW GTI, Mini Cooper S and Fiat 500 Abarth. Thanks to the extensive use of high strength steel and other weight saving technologies, the Turbo also has the lowest weight to power ratio of cars in this class. Also, we didn?t experience any torque steer during our time behind the wheel. 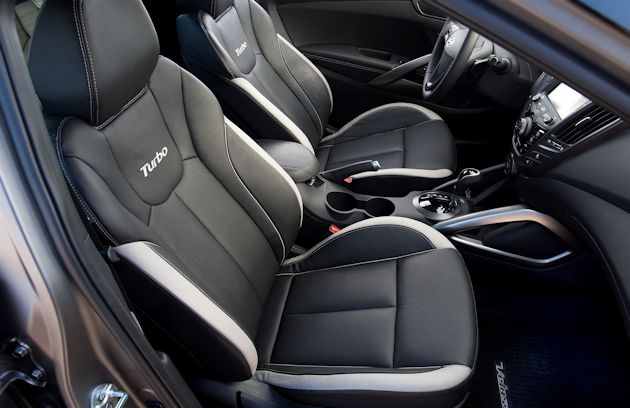 The Veloster Turbo has one of the largest interiors in the category and the cargo space is a class leading 15.5 cubic feet or 34.7 cubic feet when the 40/60-split rear seat backs are folded. 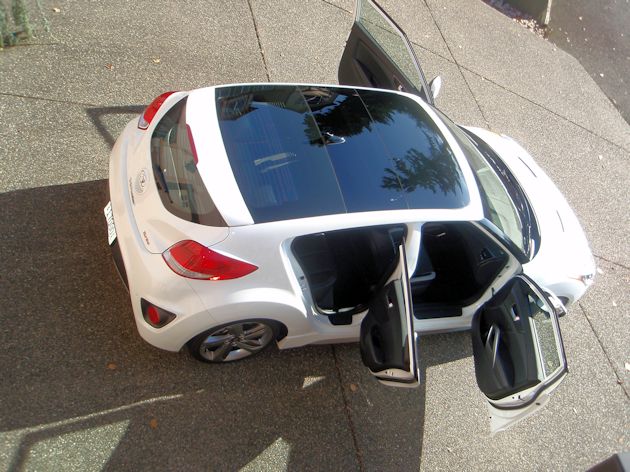 With its unique four-door hatchback configuration (one door on the driver?s side, and two doors on the passenger side) access to the rear seat is very easy, and there is room for two average size adults in the rear. 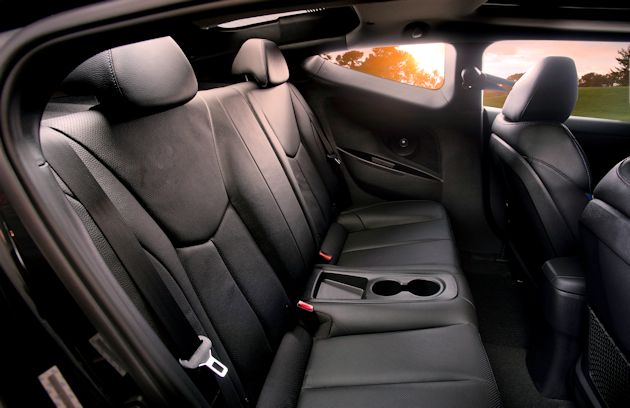 The 2014 Hyundai Veloster Turbo, which is priced at $23,075, including the destination charge, has two available options, a six-speed automatic transmission with wheel-mounted shift paddles ($1,000) and the Ultimate Package that adds navigation with rearview camera, a panoramic sunroof, backup warning sensors, automatic headlights and 115-volt outlet ($2,500). 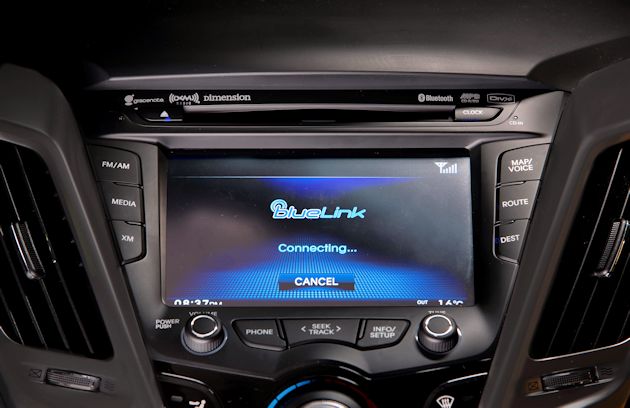 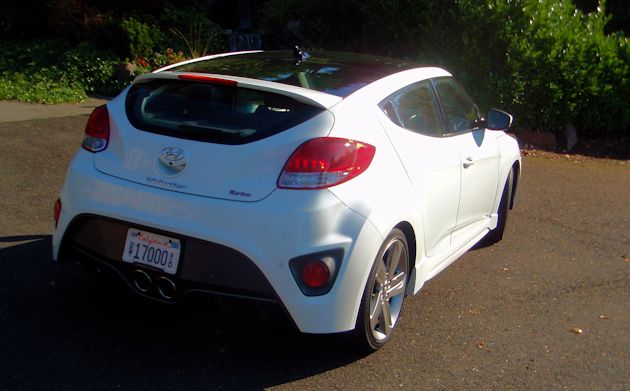 Last year, when Bill was at the Turbo introductions he asked the Hyundai Vice President, Product & Corporate Planning how they could put so many features in the Veloster Turbo and still keep the price point so low. He explained they were able to do it mostly by keeping the build process simple. By making nearly all features standard, they didn?t have to build each car differently and therefore saved money and time. Of course, that also means all the customers get a fully-loaded car ? that?s a big plus.

The Veloster Turbo is a good example of Hyundai building a quality car, with spirited and competitive performance with a distinctive design that’s loaded with innovations. 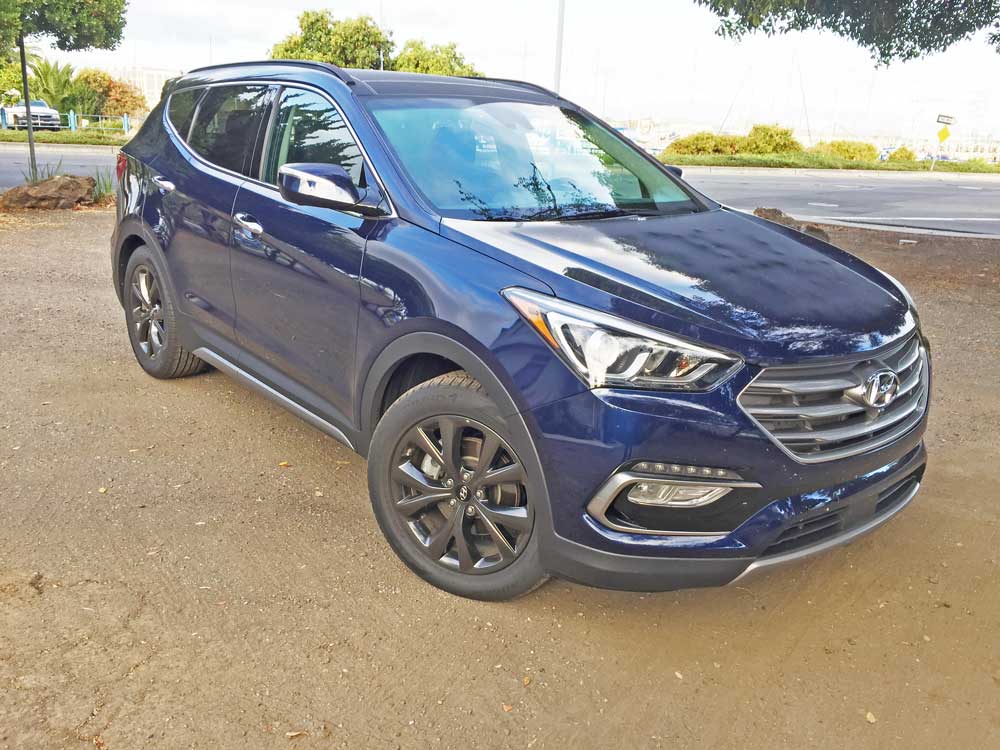