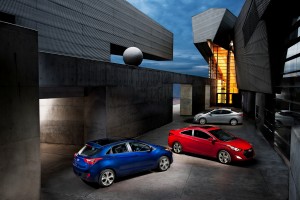 Just days after the Elantra sedan was named 2012 North American Car of the Year, Hyundai tripled the number of Elantra variants with the addition of a new coupe and five-door GT model.

First up in the spring will be a slick new Elantra coupe, followed in the summer by a practical five-door GT hatchback.

Both 2013models are designed with the same ?Fluidic Sculpture? theme that made the sedan such an eye-popper.? From the side, the Coupe takes on an even more wedge-like shape, further accented with the deeply sculpted surfaces and subtle wheel flares over the 17-inch (SE model) front and rear wheels. 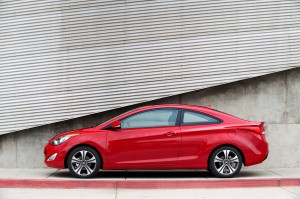 These sculpted surfaces serve to create an aerodynamic body with an exceptionally low 0.28 Cd, coefficient of drag.? The slippery design minimizes cabin noise intrusion and helps optimize fuel economy. ?The Coupe is expected to achieve fuel economy of 29 mpg city and 40 mpg highway. 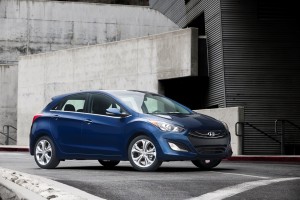 The GT has the same Accent family styling, which creates a low 0.30 Cd.? The hatchback also weights in as one of the lightest cars in the compact hatchback grouping. ?These features also help the GT achieve better fuel economy than competitors — an estimated 28 mpg city and 39 mpg highway.

Both new cars are powered by the same 148-hp, 1.8-liter four cylinder engine as the sedan.? The pair of front-wheel drive cars are also available with either a six-speed manual transmission or the optional six-speed automatic. ?The sophisticated Nu engine has Dual Continuously Variable Valve Timing (D-CVVT) camshafts and hydraulic engine mounts for optimum power and smoothness.

Both cars are designed to maximize interior spaces.? The coupe?s 110.2 cubic feet of interior space, which includes 14.8 cubic feet of cargo volume, qualifies it a mid-size by EPA standards.? That makes it significantly larger inside than competitors like the Honda Civic Coupe and Kia Forte Koup. ?The GT interior room is 119 cubic feet with cargo space configurations ranging from 23 cubic feet to 51 cubic feet when the rear seat backs are folded.? This makes the GT one of the largest in the category, which includes cars like the Toyota Matrix, Mazda, Ford Focus and Subaru Impreza. 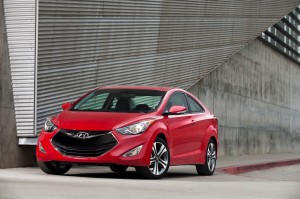 The interiors of the two new Hyundai have the look and feel of more expensive cars and offer features like a seven-inch touch screen with rearview camera display. ?Both cars are available with Bluetooth audio streaming, XM Satellite Radio and a navigation system.? The navigation system includes real-time NavTraffic and XM Data services with weather, stocks reports and sports news.? The cars are also available with other premium features like leather seating, heated front seats, power sunroof and auto temperature with Clean Air Ionizer.

The GT and Coupe both ride on a McPherson strut front suspension, with coil springs and gas shock absorbers. The rear suspension is a lightweight torsion beam, which is designed to improve steering stability.

Prices have yet to be announced, but is expected to be lower than major competitors prices. 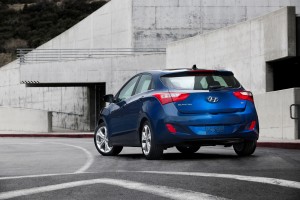