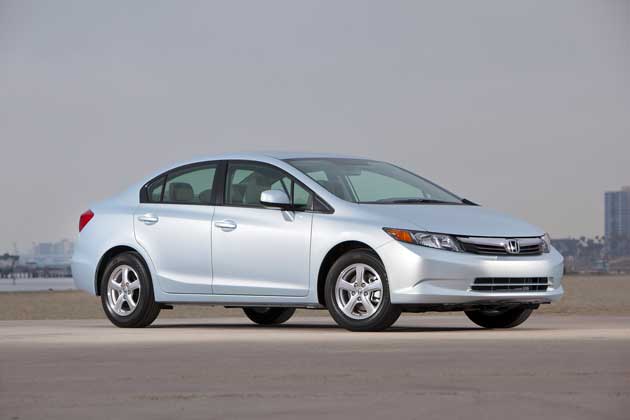 The Honda Civic has more models and variations than our favorite Chinese restaurant has menu choices. The Civic comes in sedans, coupes, DX, LX, HF, EX, EX-L, Si, Hybrid, Natural Gas and you can even get them with Navi, leather and XM.
You can shop for a Honda Civic and find nearly something for everyone with prices ranging for $16,745 for a basic DX sedan with five-speed manual up to $28,595 for a Civic sedan with a five-speed automatic transmission, navigation system and equipped to run on natural gas. 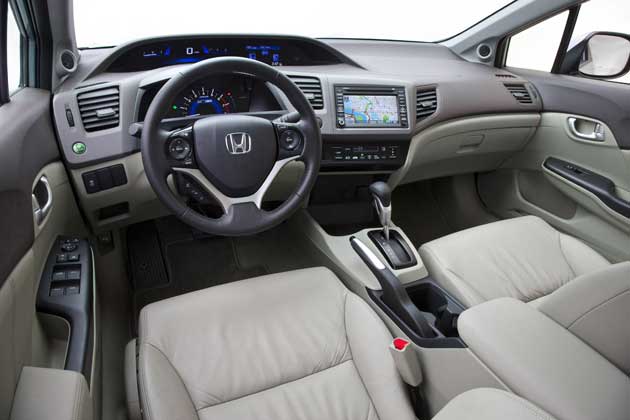 All new in 2012, the ninth generation Civic is the latest creation of what has become the international icon of compact cars. The latest generation shows a new level of sophistication and refinement but doesn?t make you want to jump up and point, ?Did you see that new Civic?? We understand from early responses that we may see more changes than normal during mid-cycle changes.
The interior is clean looking with a redesign of the innovative two-tiered instrumental panel that debuted with the last generation. It features a digital speedometer, gauges and new ?intelligent? Multi-Information Display (i-MID) mounted under a broad visor that extends over about half the dash just below the windshield. A large tachometer and other display elements are housed in a traditional position behind the steering wheel. The combination of the two levels is one of the easiest instrument panels to see at a glance.
Controllers for the i-MID are mounted on the face of the new steering wheel, making for easy, intuitive control. The audio and climate controls are conveniently mounted high on the center stack facing toward the driver to create cockpit style layout for the driver. The switches are well designed and easy to use but they look plastic on models without the Navi option and overall, the dash lacks the soft touch materials that add an upscale feel. 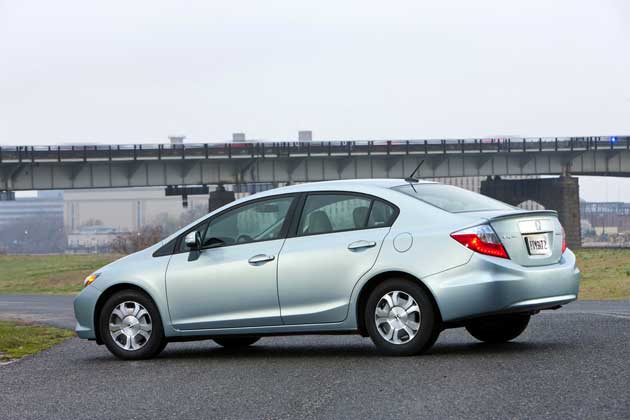 The new five-passenger interior is roomy and comfortable and we like the abundance of available storage spaces. There seemed to be more than a normal amount of noise, though, on the rough surface roads.
All models, except the Si and Hybrid are powered by a sophisticated 140-horsepower, 1.8-liter i-VTEC four-cylinder engine. The engine produces an 8.8- second 0 to 60 mph time and fuel economy ranges from 27-29 mpg city and 38-41 mpg highway depending on the version.
The Hybrid has a 110-hp 1.5-liter i-VTEC SOHC I-4 engine with Integrated Motor Assist, which produces EPA numbers of 44/44 mpg. The Si models have the 201-hp 2.4-liter i-VTEC DOHC I-4 engine, which is rated at 22/31 mpg. The Si makes 0 to 60 mph runs in only 6.4 seconds.
All versions, except the Si, have an ECO-Assist economy driving coach. When activated by a button on the dash ECO-Assist displays how drive energy is being used and advises the driver with blue and green ?coaching bars? that illuminate on either side of the speedometer. Blue bars indicate you are probably having too much fun, while green bars say you are being efficient.
The 2012 Honda Civic Si has a six-speed manual transmission, the Hybrid a Continuously Variable Transmission and all other models either a five-speed manual or five speed automatic.
Sedan prices range from $16,575, including the destination charge, for the DX sedan with manual transmission to $23,175 for the Si. With all the available options, navigation and XM Satellite Radio, the most expensive Si sedan is $25,175. Hybrid prices range from $26,720 to $27,920. The natural gas powered GX is $26,260. Coupes range from $16,375 to $24,975.
All 2012 Honda Civic models,? are engineered with Honda?s exclusive Advance Compatibility Engineering? (ACE) ?. In the event of a head-on collision, the system is engineered to transfer the energy away from the passenger compartment. It?s used in conjunction with all the other Honda safety equipment including airbags, Vehicle Stability Assist and various braking aids.
As the model year progresses, we have had an opportunity to drive at least one of the cars from each of the categories, and they are all solidly built and well designed to fit their category.
The natural gas version was very interesting because it was impossible to tell that it was powered by anything other than gasoline. The only downside it the limited number of public fueling stations available, in fact, in the Portland, Ore. area the number is zero. Advantages of natural gas (CNG) are the very low emissions and the fact that it reduces our dependence on petroleum. Based on EPA calculations CNG has an equivalent price of $2.15 per gallon. The CNG Civic has an EPA rating of 27 mpg city and 38 mpg highway. Honda was experimenting with home fueling systems, but dropped the program due to moisture problems. 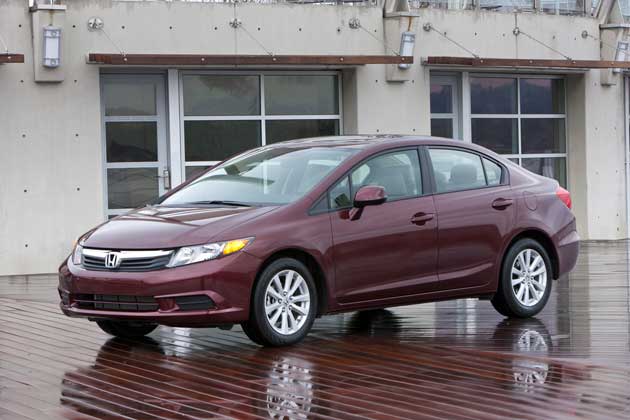 The Si is notable for its solid body and taunt suspension that produces a very stiff, somewhat rough, ride, but the handling is outstanding for a front-wheel drive car. The engine redline was dropped down from 8,000 rpms to 7,000 rpms in the new Si and a new sequential rev-limit indicator was added. Mounted in the upper level of the instrument panel, to the left of the speedometer, the indicator shows when the VTEC shifts from low- to high-rpm cam profiles and the car gets an extra surge of power. Using this in conjunction with the rev-limiter indicator the driver can more easily judge the performance ?sweet spot? to maximize performance in each gear. The Si is still one of the most fun to drive sporty cars in the segment, and it comes in both coupe and sedan models. 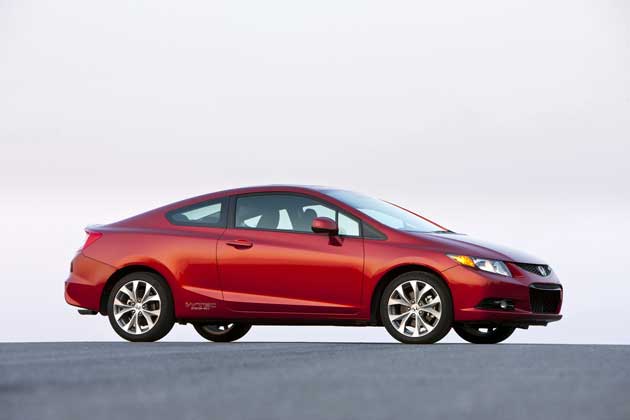 The HF isn?t nearly as exciting as the Si, but it?s a solid, comfortable car that?s designed to produce high levels of fuel economy without having to pay extra for a hybrid or diesel. This latest version gets a 29/41 mpg rating and that makes it the highest fuel economy for a non-hybrid car with an automatic transmission.
The 2012 Honda Civic Hybrid gets better fuel economy, now 44/44 mpg, than the previous model, but still falls far short of the Toyota Prius. The Hybrid also gets more standard equipment, but the price is high alongside the competitors. Never the less, the 2012 Honda Civic Hybrid is high quality, comfortable and a good investment.
We think the new Civic models are still some of the best compacts in the business, but Honda needs to watch closely because the competitors are coming on strong with impressive new products that could ultimately take over the market Honda has enjoyed for many years. We know Honda has the skills to keep them at the top; we?d like to see the innovation we know they have.