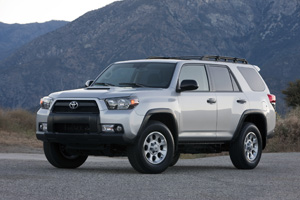 She ? Over the years, the Toyota 4Runner has developed a well-deserved reputation for being a rugged and versatile off-road SUV.? This reputation has carried forward with the model through generations with the traditional improvements that customers expect.

For 2010, 4Runner has made even more advancements to bring the fifth generation to the pinnacle for the category.? The latest version is taller, wider, longer and more powerful.

He ? You can?t make something bigger and better without more power and of course, this runs contrary to the industry trend to improve fuel economy.? So Toyota did both.? First, they dropped the 260-hp V-8 engine.? Then they developed a new version of the 4.0-liter V-6, taking the horsepower from 236 up to 270.? The new engine fuel economy was improved significantly to 17 mpg city and 22 mpg highway.? We averaged 19.6 mpg during the week we drove the SR5.? On-road acceleration is down slightly to 7.8 seconds for the 0 to 60 mph run.

For a little better fuel economy, the SR5 is available with a new 157-hp, 2.7-liter four-cylinder engine option.? The engine is rated slightly better than the V-6 at 18/23 mpg.

She ? With its strong front fascia and chunky wheel arches, the new 4Runner looks as if it?s been working out at Gold?s Gym and perhaps taking some muscle enhancing steroids.? Large and a standard roof rack further enhance the rugged look.

The interior was completely designed with more space throughout.? The front seats were very comfortable and the rear seat is actually wide enough for three close friends.? A third row of seating, which folds flat, is available on the SR5 and Limited models.

I was impressed by the cargo area, not only did it hold a massive 46 cubic feet of cargo, it had the optional ($350) sliding rear cargo deck.? After a cargo area is filled, it?s difficult to get things out, or reach something in the back.? The sliding cargo deck will hold up to 440 pounds and can be released by a lever on the rear edge to slide out about 18 inches.? It not only makes access easier, but it can be used for tailgate party seating.?? There?s also a storage box built into the floor behind the rear seat that?s great for carrying tools, etc.? Unfortunately, the space is a little hard to access. 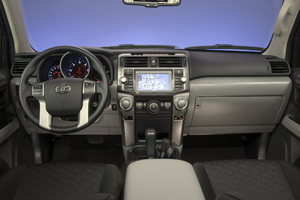 He — The 4Runner runs well on pavement providing a smooth comfortable ride with less road noise than many of the cars we?ve driven.? The steering is precise, and the brakes are strong, but the suspension displays a little body roll that makes it feel a little wobbly when the corners get tight.? I imagine I would feel more comfortable with a little more time behind the wheel.

When the pavement ends, the 4Runner excels. ?Built on a rugged body-on-frame platform, the frame is super strong and equipped to handle the toughest challenges.? Our SR5 version and the Trail model both have a two-speed lever-operated, part time four-wheel drive system.? The Limited is equipped with full-time, four-wheel-drive with a locking center differential and a three-mode, center console-mounted switch.

He ? The off-road capabilities of the 4Runner have been enhanced further with the addition of advanced features formerly only available on the top Toyota off-roader, the famous Land Cruiser.? The Trail grade version is now available with Kinetic Dynamic Suspension System (KDSS).? The system automatically disconnects the stabilizers bars to allow more axle travel and better suspension articulation in slow, rugged terrain.

Toyota?s Crawl Control (CRAWL) feature is standard on the Trail grade. CRAWL is an adjustable electro-mechanical system that works like a low speed cruise control keeping the vehicle at one of five appropriate speeds through rugged conditions.

Standard on all 4X4 models is the Downhill Assist Control that holds the vehicle at a target speed on hills for better control and A-Trac that ?distributes the power to any one wheel that has traction.? All the V-6 models have a standard Hill-start Assist Control (HAC), too.

She ? The new 4Runner is certainly an impressive vehicle for those shoppers looking for a big off-roader.? It?s quiet, comfortable and roomy.

He ? With so many of the SUVs making the crossover move, the Toyota has done just the opposite, by enhancing the 4Runner?s off-road prowess and making it one of the best choices available for shoppers who want the real thing.